This past month certainly lived up to its reputation, coming in like a lion, gnashing perilous teeth, dumping blankets of rain and hurricane winds, effectively shredding many an opportunity to enjoy the water. We’re quite pleased that March left us on a far more docile note, with characteristic lamb-like days pushing 70 degrees and tranquil skies. Between steelhead trips to BC and the Olympic Peninsula that were hopelessly flooded out and beach or lake trips that were blown to kingdom come by tree-toppling gusts, many of us missed out on a lot of potential fishing opportunities. Needless to say, our recent sudden shift to bluebird days was a welcome one. Spring has sprung and with it the annual yard work versus an afternoon on the water debacle has reared its ugly head. Fish now and wait for the next breezy drizzly day to mow the lawn. It’s really a no brainer. With lots of lowland lakes about to open, spring steelhead still happening on the Peninsula and BC rivers and the beaches of Puget Sound starting to light up with salmon fry, April is going to be a fantastic month to get out and swim a fly. Don’t forget, the new license year began April 1st, so make sure you’re good to go. BC’s annual license year began the same day. With the current exchange rate being pretty favorable to Americans, it’s a great year to do some exploring north of the border as well. 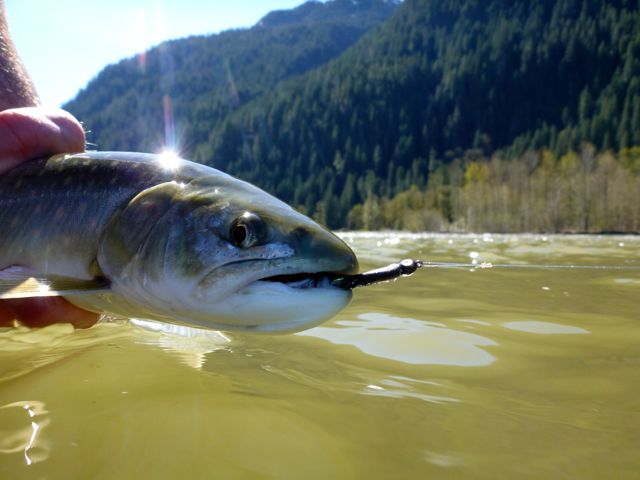 In all it’s been a decent year for fish and a not so great one for fishing winter steelhead on a lot of watersheds throughout the Pacific Northwest. As we ease into April, look for conditions to generally improve. This month often finds rivers on the lower and clearer side with stable water conditions. There are still plenty of steelhead around and this is peak time. With most of our local Puget Sound rivers still closed until June, we are spending a fair amount of time fishing the BC rivers just across the border, from the Vedder to the Squamish. These rivers tend to fish all through April and even into May for fresh steelhead, provided spring spate doesn’t kick in too soon. We saw a dramatic rise in the Squamish with last week’s warm temperatures, but expect it’ll shape up nicely as the weather cools a tad. Many of the Peninsula rivers will close on April 15th, so you’d better get out there if you’d like one last opportunity before the season ends. For spring steelhead, your big Intruders, String Leeches and Marabous are still on tap when the rivers flows are high and off color, but be sure to bring some smaller, more subdued patterns along for the ride when the water is low and clear. Sparse Marabou GP’s, Hoh Bo Speys and even traditional summer hairwing patterns like the Green Butt Skunk are in order. If you’re ready to put away the big two hander and fish trout and char, salmon fry are really getting going and you’ll find steady action on char and trout in the Squamish, Stave and Harrision this time of year. Small Epoxy Fry patterns, Sculpzillas, Kiwi Muddlers and Rolled Muddlers on a single hander or light trout spey make for an incredibly fun day as aggressive trout and char snack on hapless fry getting swept down current. The lower Skagit, from the Memorial Highway Bridge to the mouth remains open and with the river really shaping up, should provide some fine fishing closer to home. It should be noted that wild winter steelhead have been in decline throughout much of Puget Sound, which precipitated the loss of many of our local spring river fisheries. We are working with Wild Steelheaders United and our local Trout Unlimited Chapter to conduct winter steelhead spawning surveys on the Skagit to help collect more data on the population. If you’re interested in helping with the surveys or learning more about the process please feel free to contact us. 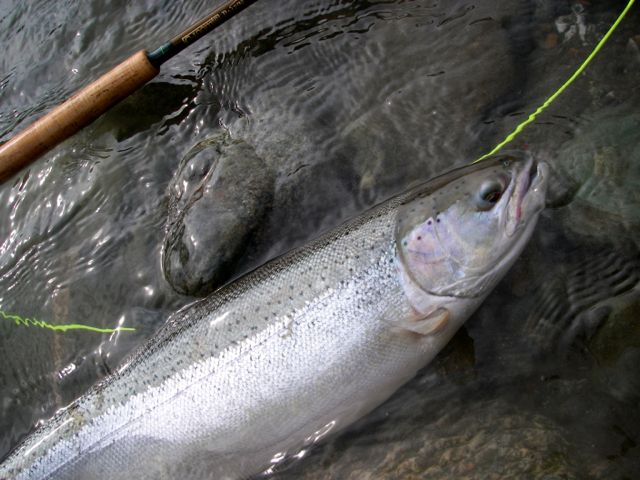 Beach cutthroat fishing is underway, and while you’ll catch them on a variety of patterns like Conehead Squids and Searun Buggers, don’t leave home without a handful of salmon fry imitations. We are now spotting balls of chum and pink fry just about every beach outing and have the sense that it’s only going to get better as we fish our way through April. We’ve had some challenging days with the wind and weather, but as things calm down, we’re getting very excited about the prospects. South Sound and Hood Canal are fishing well, and we are beginning to see more cutthroat around Whidbey as well. The sea run bull trout continue to be around. Some days they’ll hang out the better part of a tide within casting range and others they’ll lurk 200 feet off the beach, crashing big bait at the end of a tournament cast. The key to finding fish on our beaches is to fish them as often as you can, taking note of tidal conditions and timing. Some days the fish will be there and some days they won’t. The vast majority of our North Sound beaches fish best around the high tide, as that’s where the rocky structure resides. At low tide, many become an expansive mud flat. Look for jumping fish, gull activity or scattering bait at the surface and cover water until you find fish. It’s an active and worthwhile pursuit and the scenery is tough to beat. We have a surplus of really strong tides in April which means lots of water movement and food getting pushed around out there. The opportunities are many. Go find the hungry ones. 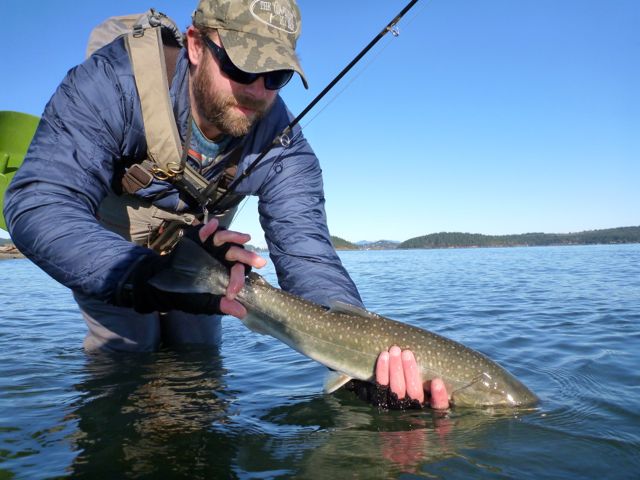 The air finally has a tinge of warmth, the marshlands are dank with skunk cabbage and a multitude of flowers are in bloom when the wind relents and permits the petals to stick around for a few days. Bugs are even hatching and trout are eating them. While Squalicum, Pass, Fazon, Grandy and a number of year round lakes have been fishing well the past several weeks, we’re about to have considerably more options later this month with the general lowland lake opener on April 23rd. It’s been predominantly a chironomid and leech show so far on our stillwaters with Ice Cream Cones, Chromies, Bloodworms, Pumpkin Heads, Squirrel Leeches and Hale Bopp Leeches finding some fish. On those warm afternoons, we’re also seeing some surface midge activity as well, with Suspender Midges, Griffiths Gnats and tiny Parachute Adams getting it done on or very near the top. April typically sees a scattering of callibaetis mayflies on the lakes that have them like Pass. A #14 Callibaetis Cripple can be deadly when trout key in on these speckled wing duns near the shoreline reeds. Desert lakes like the Seeps, Lenice, Nunally, and Coffeepot have all been fishing very well and with a mild winter behind us, we expect to find quality fishing throughout the spring as more lakes open up. We are also starting to gear up for bass and bluegill in the coming weeks as the warmer days will begin to find them more active and in the shallows. Micro leeches, damsel nymphs and bead head Hare’s Ears work well for the sunfish, while we prefer bigger presentations for bass, like Bass Turds and Jaw Breakers. As we get further into the spring, topwater Frog Poppers whenever, Black Poppers at lowlight and Tigger Poppers on those bright days make for an exciting and visually stimulating fishery on waters like Big Lake, Terrell, Fazon and Campbell. 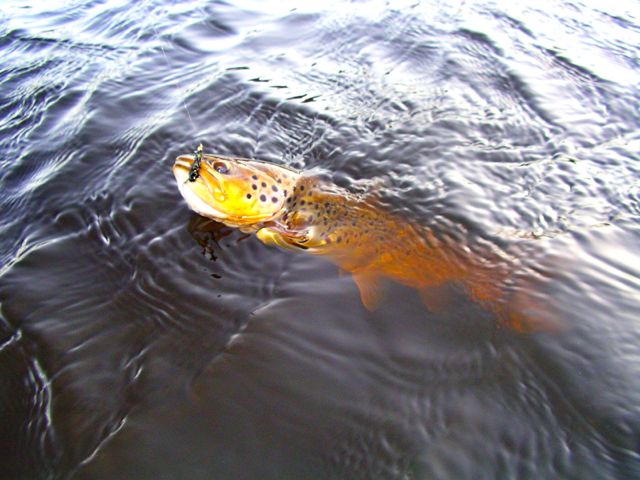