Daffodils, Tulips, Skunk Cabbage in full bloom, Spring has finally sprung. The winter we’d thought would never end is finally showing signs of fatigue and in it’s snowy, icy and unbearably wet wake, a new fishing season is blossoming before our very eyes. Stillwater is warming up and the trout are once again active and sampling the smorgasbord of spring hatches. Spring steelhead continues to hold its own on the Peninsula, though that season is nearly finished for the year on most rivers. The saltwater scene has noticeably picked up with chum fry in numbers throughout the sound. There are a lot of great options out there to enjoy this time of year and with the general lowland lake opener coming up in a few weeks, things will only get better. Shed a few layers, trim the beard, don’t forget your sunscreen and spend some quality time on the water doing what we all love to do, because it all goes by just a little too fast sometimes. Pack your Gore Tex jacket for a few more months just in case. We all know that Mother Nature in the Northwest is full of surprises. Lastly, the 2017 Fly Fishing Film Tour is almost here. This year’s tour has some really great films covering everything from Mongolian Taimen to Russian Rainbow Trout and Mexican Permit. Don’t miss it! 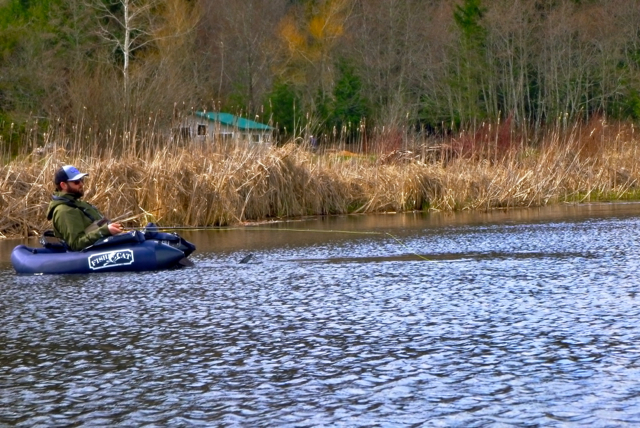 Lakes
Our local year round lakes have been fishing really well over the last few weeks, with Squalicum, Pass and Grandy providing some very consistent fishing. If chironomids are hatching and the swallows are swooping it’s hard to ignore the effectiveness of fishing a chironomid or tandem chironomid rig with or without an indicator. We’ve caught fish on Chromies, Brown Ice Cream Cones, Black Ice Cream Cones, Black Sallies and Wine/ASB Chironomids. The little bright green chironomids are starting to appear as well. We are seeing mostly #14’s and #16’s along with some really tiny bugs out there too. Look for the bigger #10’s and #12’s to start appearing as the season progresses. On the periphery of the chironomid hatch, black/red or peacock Simi Seal leeches, along with olive Pumpkin Heads and brown, black or olive Squirrel Leeches have been working well. The Balanced Leech fished under an indicator on a floating line has also been a good game. It’s been a long time coming but we have finally gotten some commercial Balanced Leeches from Solitude Flies so the non-tiers out there can get in on the consistent action these little beauties provide. Early opener desert lakes are fishing well, like the Lenice, Nunnally, Merry Chain near Beverly along with Dry Falls (April 1st opener) and several of the Seep Lakes. Chironomids have been dominating the stillwater scene and will continue to do so over the next several months. We should begin to see some Callibaetis mayfly activity as April progresses and lasting through May on most stillwaters, with damsel fly nymph imitations also becoming important. For our put and take lakes, we generally favor general attractor patterns like Doc Spratley’s, Carey Specials and Woolly Buggers. Don’t overlook your off-the-wall colors like bright red or chartreuse. The flashier Bead Head Pop’s Buggers are also good for the stocked trout. Remember, they’re still figuring out what real food looks and acts like. Be sure to have some CDC Midge Emergers and small Parachute Adams in your box as well. We’ve had some fantastic top water afternoons when the wind is light and the trout are picking off emergers near the lake’s surface. 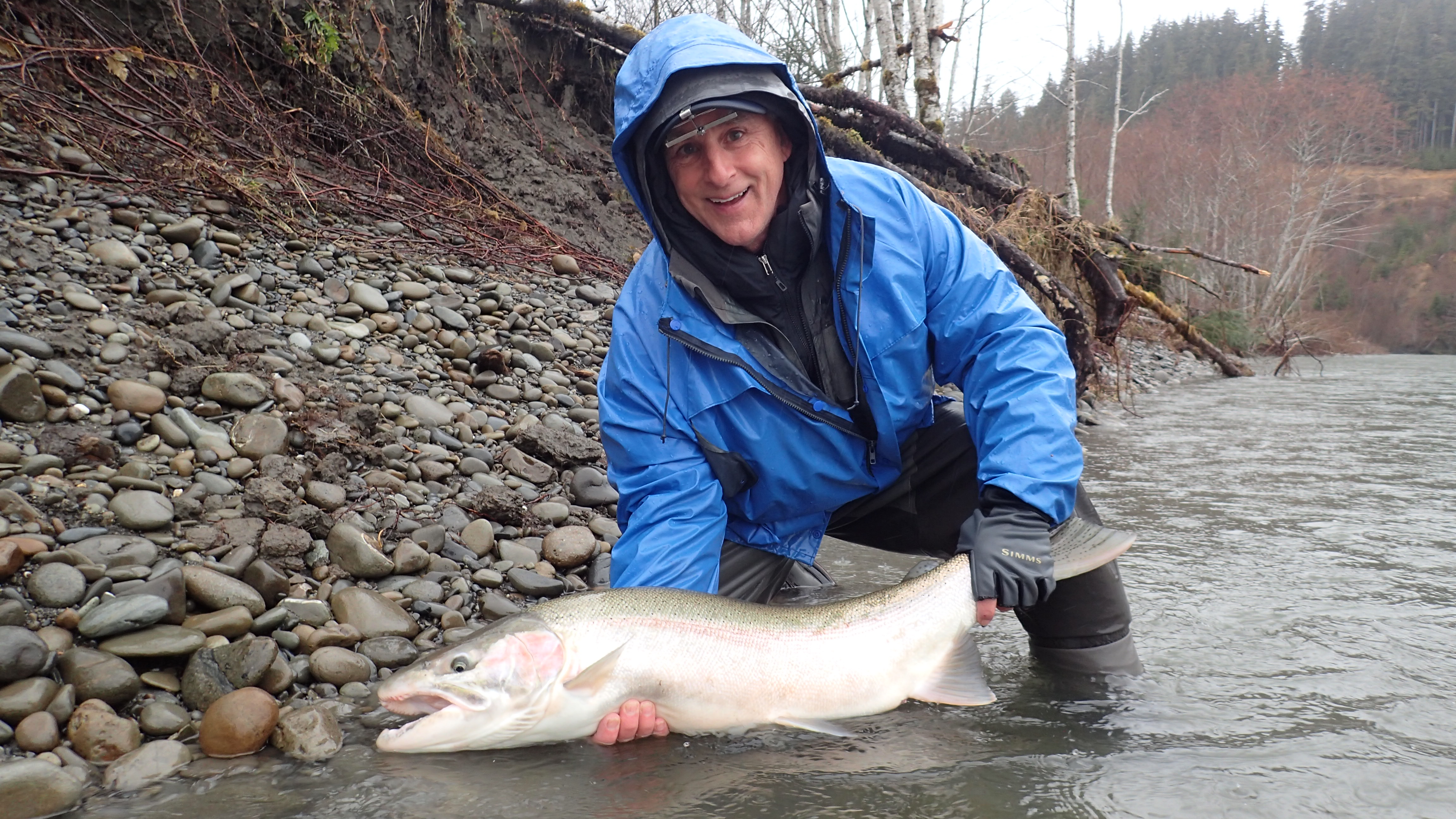 Rivers
Spring Steelhead is winding down or just getting started depending on which direction you’re headed. The rainforest rivers on the Peninsula mostly close on April 15th, with a handful remaining open through the end of the month. Be sure to check your Washington Regulations pamphlet for the latest updates. The Squamish steelhead run in BC typically peaks in late April and early May and can be a great fishery depending on water levels and run off. The Vedder just across the BC border fishes outstanding in April and if it stays in shape, will continue to fish in early May when the lower river goes to fly fishing only regulations. Ideally you want the Vedder running below 2 meters on the BC Hydrograph for decent fly fishing conditions. Match your patterns to the water conditions. This time of year we often find ourselves fishing lighter sink tips, even floating lines and small presentations like Hoh Bo Speys and Marabou GP’s in black, purple or hot orange. Don’t overlook more subdued natural patterns like the Exasperator Sculpin in olive when the water is clear. These work particularly well in systems with lots of cutthroat and/or char on the prowl, but steelhead will frequently crush them too. While our lower Skagit (below the Memorial Highway Bridge in Mount Vernon to the mouth) fishery has been difficult to catch in shape this season, BC rivers like the Cheakamus, Harrison and Stave are now full of out-migrating chum fry and cutthroat and bull trout are eating them on a daily basis. Epoxy Fry, Foxy Fry, Chum Fry, Bead Head Rolled Muddlers and Chum Babies are the name of the game on floating lines or very light sink tips as the fry tend to swarm near the surface. Look for aggressive surface feeding activity early and late in the date when fry tend to be most active and you’ll potentially enjoy some fast and exciting fishing. 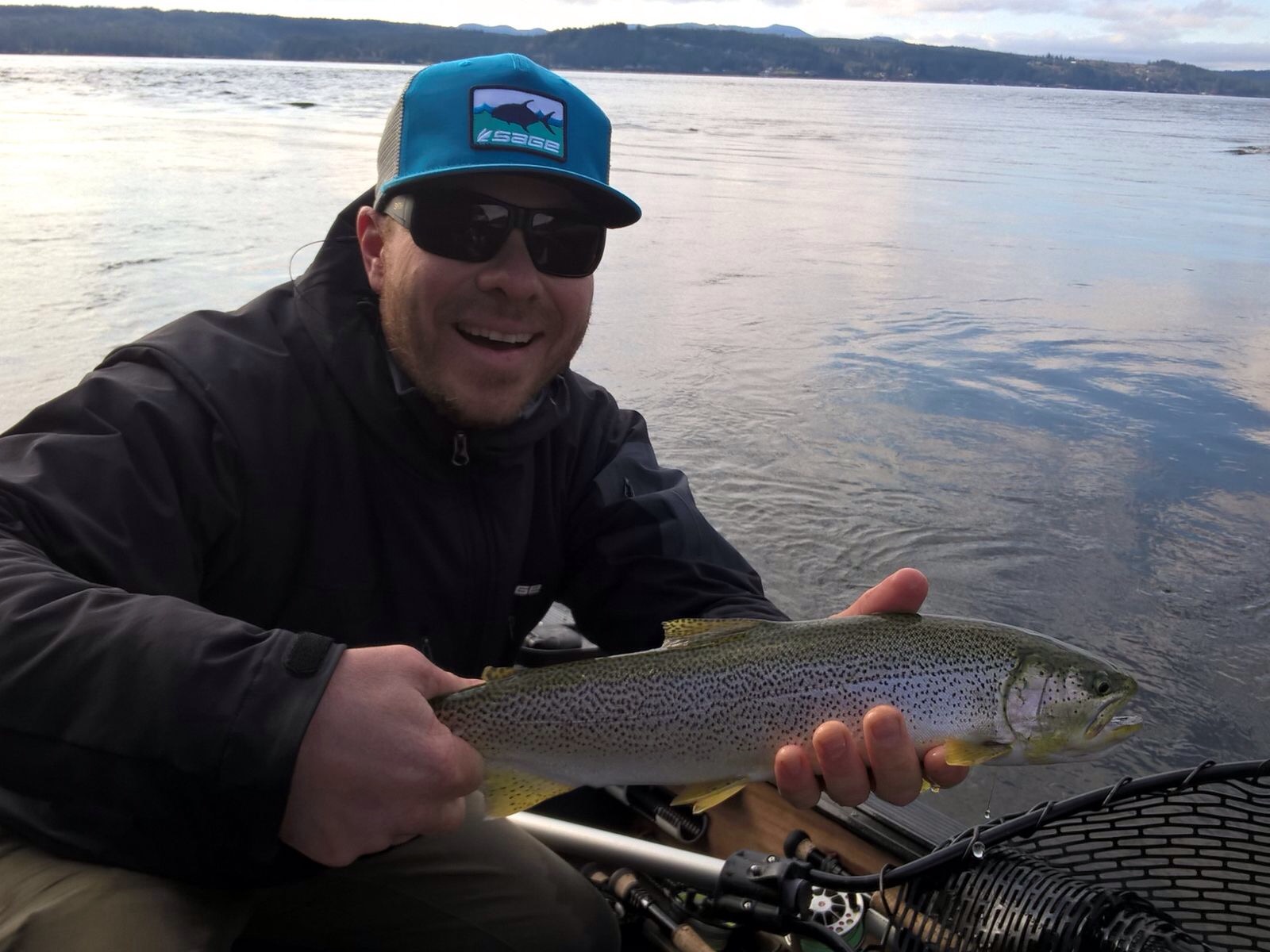 Beaches
Things are once again happening in the salt close to home and around the Sound. We’ve been finding some sea run bulls, cutthroat and the occasional small feeder blackmouth and coho around our Whidbey Beaches falling prey to a variety of patterns from Chum Babies to bigger Deceiver and Clouser Patterns in the 4″ range. Floating and intermediate lines on a 5 or 6 weight faster action rod have been our outfit of choice. Further south in the Sound and in Hood Canal, chum fry have been present in large numbers and the cutthroat are really keying in on them. Small Gurglers, Chum Babies and Epoxy Fry are working well. Most beaches, you’ll want to focus your fishing around 2 hours before and after the high tide with a good tide swing. We really like Protides as our tide predictor as the graph feature makes it really easy to circle the days on a calendar for potential fishing excursions. Look for days with fairly high peaks and valleys on the graph. You’ll see we have a number of them coming up. As for our summer salmon fisheries, WDFW just announced this year’s salmon seasons. Here’s the announcement from the WDFW website. While we will see more restrictions than in years when salmon are in greater abundance, the fisheries overall appear to be a pretty solid improvement over last year, including a coho fishery in Marine Area 9, which we are really excited about! 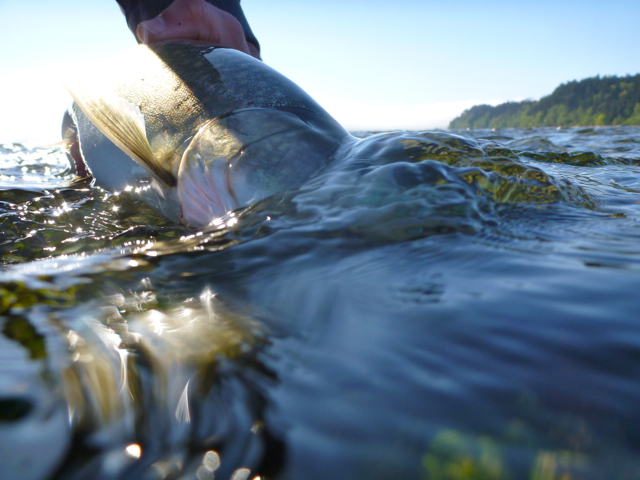