Our August report comes to you from Estes Park, Colorado, beneath the panorama of Longs Peak and the Rocky Mountain National Park.

The weather is appreciably cooler here and something akin to perfect for an August afternoon. It is a welcome break from the heat and humidity of western Washington and perhaps in a day or two, an opportunity to fish the streams of my youth, meandering through the pines and chasms of willows. With so many heat related stream closures throughout Washington and Southern BC, escaping to the high country meadows of Colorado in search of a trout or two will strangely feel like home despite the distance and changing landscape. If you fish, just about anywhere in the world feels like home, so long as you can be standing in crystalline water, waving a graphite wand and making magic happen with the creatures that swim there. Enough waxing philosophical, lets talk about what’s happening in the Northwest corner of Washington. 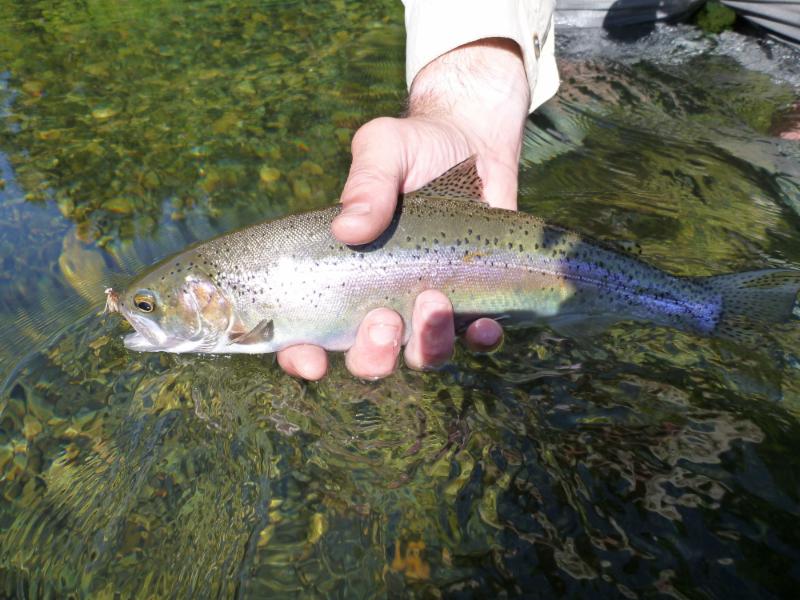 Be sure to check for the latest closures and hoot owl restrictions before venturing out to the rivers or planning a trip. WDFW’s drought page is an easy reference for the current regulations. Likewise, BC restrictions can be found on the Ministry of the Environment website.

Despite the widespread closures, opportunities still abound on our moving waters, from the upper open tributaries of the Skagit River and Nooksack River to the Methow, east of the Cascades. Bring a stream thermometer with you. If the water remains in the low 60’s or colder, fish will be active and in their element.

If the water exceeds 65 degrees fahrenheit, it’s best not to fish as temperatures this warm can be lethal to trout, salmon and char. August is a fantastic month to fish terrestrial patterns like ants, beetles and hoppers, along with the big foam or rubber-legged attractors like Chubby Chernobyl’s and Bugmeisters. #14-#16 Tan Elk Hair Caddis and Parachute Adams continue to fish well in the high mountain streams and the North Fork Nooksack above the falls. The Skagit below Gilligan Creek opened for pink salmon retention on August 1 and will open up to the Dalles Bridge in Concrete on the 16th of this month.

Judging from the numbers of pink salmon we’ve been encountering in the Sound lately, we should have fishable numbers in the Skagit as well. Small Pink Comets, Pink Darts, and Pink Aviators work very well. The Nooksack is open for pink salmon up to the Everson bridge and although visibility is severely limited by glacial turbidity, there is no shortage of salmon showing up in the river. Focus on slightly larger profiled pink patterns and fish early in the day when the water clarity can be a bit better on the Nooksack.

Beyond trekking into the alpine lakes and high country tarns, much of our local lake fishing is pretty dead until things cool off in the fall. Even the bass and bluegill have been taking a mid-day siesta in the oppressive heat. Top water spiny-ray action can still be pretty amazing at dawn and dusk, even into darkness. Just watch for bats on your backcast! Big noisy bass poppers and mini-poppers for the bream are the ticket. High Country trout are seldom super selective, but often long, light leaders (down to 6x) are necessary on the air-clear lakes in the absence of a breeze. Griffith’s Gnats, Para-midges, Parachute Adams and Midge Emergers in #18-#22 work well on top, with Zug Bugs, Hare’s Ears and small chironomid larval patterns producing subsurface.

Unless the alpine lake you’re fishing is no more than a few acres, you’ll typically catch more fish by packing in a float tube or small inflatable raft that will allow you to cover the water much more effectively. Deeper, mountainous impoundments like Ross and Diablo Lakes will still fish through the heat, but fishing early and late, along with presenting your fly deep will prove most successful. 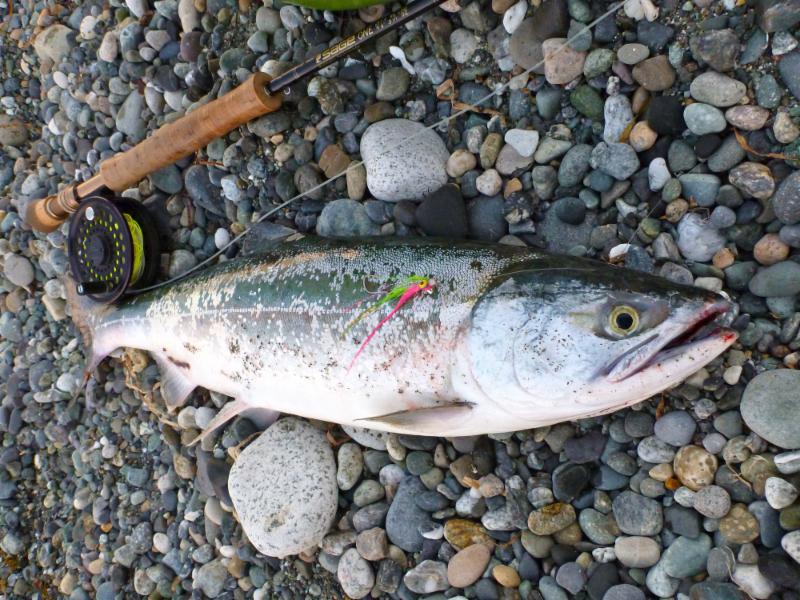 We’ve spent the preponderance of the last few weeks on the west side Whidbey Island beaches chasing salmon as their numbers build impressively.

We are finding more and more pink salmon, a surprising number of resident coho to 3-4 pounds and a variety of odds and ends from Kelp Greenling to a surprise Mackerel that a friend picked up on a fly while fishing for salmon. Closer to Bellingham, we’re finding the odd sea run around Chuckanut Bay or north along the Straight of Georgia beaches. Clousers, clousers and more clousers have been the top producers. #6 Humpy Clousers in classic pink/white and pink/chartreuse/white are working well for sea runs and pinks, along with larger pink/white, chartreuse/white and chartreuse/pink Craft Fur Clousers for coho and pink salmon. Right now, some of the best beach fishing has been from Fort Casey and south.

As August unfolds, look for more pinks to show around the north end of the island and along the east side as well. We ran another three of our popular beach classes in July based on interest. If anyone out there still wants to do a class, contact us and I may put one more together for this year.