January concluded with a thorough drenching that left most of our rivers high and muddy. Somewhere in there we found a few fishable days and with them plenty of bull trout and the odd obliging steelhead. Many of our North Sound steelhead rivers are now closed for the season, save for a few short open sections that remain worthwhile pursuits for the next couple of weeks. February is most certainly a month of fly tying, cherry picking those precious warm afternoons for a foray to the lake, the beach or wherever you may find fishing. It’s also a fine month to venture someplace warm, enjoy the sunshine and fish for the weird and powerful fish we don’t get to fish for around these parts. I just got back from a brief family vacation with wife and son on the Island of Hawaii. I’d heard tales of big difficult bonefish and thought I’d pack a rod and a few flies for a morning flats excursion. After a cursory exploration I confirmed that Hawaiian bonefish are indeed big and very difficult, far more than their Bahamian or Mexican cousins that, in my experience, have a certain aptitude for cooperation. I saw them, tracked them, spooked them and in one glorious moment, had a 10 pound bone track my fly, tip down and then slowly shy away in what we like to call an epic refusal. It’s certainly a fishery that begs a little more focus and time, if only to boast that you figured it out, at least long enough to hook one really big bonefish. February is in some ways a practice month, a preparation month for when things actually begin to happen. We have a lot of great events lined up for this month at the Confluence Fly Shop. Join us as we get ready for the promise of Spring. 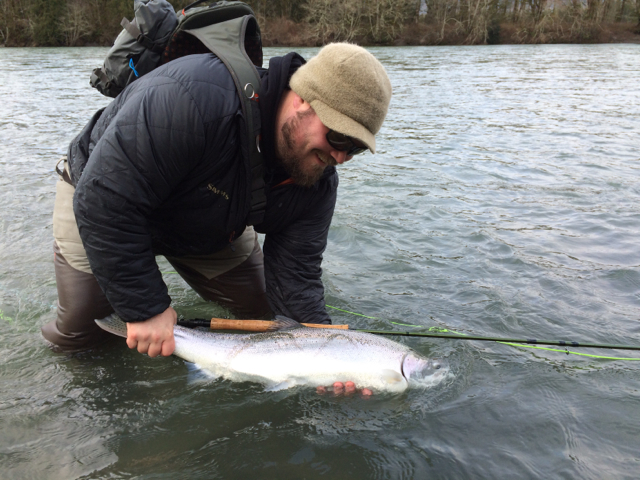 Rivers
Though a surplus of water posed some challenges toward the end of last month, we found some wild steelhead primarily on the Skagit in between flood cycles. There is a lot of conjecture about a Spring catch and release season returning to the Skagit and Sauk at some point in the future. If managed properly, we’d certainly relish the opportunity to swing the wide sweeping flats of this once-renowned river when the cottonwoods are budding and skunk cabbage percolates up through the lowland marshes. For now, we had to settle for a taste of what this magnificent watershed was willing to share this winter. The Nooksack was a lot more hit and miss this season, but shared a few steelhead as well. Through February 15th, we can still fish the NF Nooksack from the mouth to Maple Creek, the Skagit from Rockport to Marblemount and the NF Stilly from French Creek to Swede Heaven Bridge. Elsewhere in the region, the Olympic Peninsula Rivers are fishing well, as is the Vedder River just across the border. We get asked almost daily what the magic fly is for winter steelhead and would love to tell you in good conscience all about that most irresistible amalgamation of fur and feathers we unwaveringly fasten to the end of our 10 lb. Maxima. The truth is, there isn’t one. Steelhead will readily take just about everything under the sun under the right conditions. Have a variety of flies in bright and dark colors, large and small sizes and a few different weights. Show your fly to a steelhead presented slow and enticing. If he can see it given the water conditions, chances are that good things will happen, especially if it’s a rested fish. There is so much mystique about presenting flies for winter steelhead one can easily walk away feeling woefully inadequate. If you’d like to circumvent that relatively steep learning curve, consider the upcoming on-the-water steelhead class on the Olympic Peninsula on March 19th. It’s a small price for a ton of insight and knowledge. 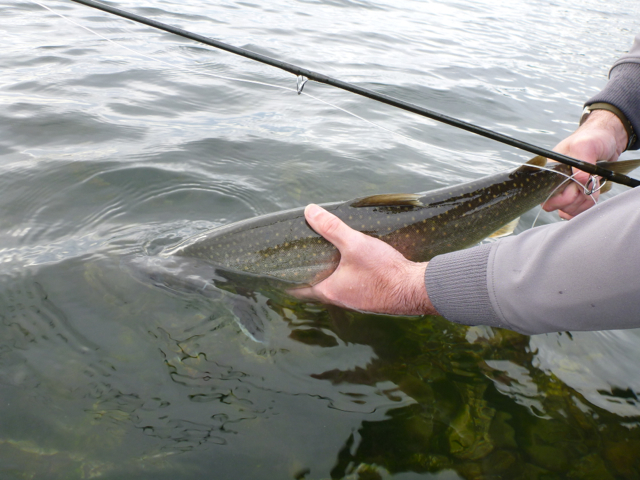 Beaches
We are getting awfully giddy about the fry hatch coming up. Most even years we see the first swarms of pink fry showing up in the saltchuck sometime in March, and with them hungry sea run cutthroat and sea run bull trout. We have a great selection of fry patterns arriving this month to help you fool a few fish. February typically sees fewer fish in the North Puget Sound than we’ll encounter later in the year, but we do find a variety out there, even in the throes of winter, from cutthroat and sea run bulls to resident coho, blackmouth and occasional steelhead, not to mention the flounder, cabezon and oddball species you seldom target but intermittently catch. You’ll frequently have the beach to yourself while you regale at the clear snow-capped peaks of the North Cascades or Olympics depending on your location of choice. Your standard chartreuse/white and gray/white Clousers make reliable probing patterns, along with Delia’s White Conehead Squid, green/white or blue/white Deceivers and West’s Imitators. For beach bound winter steelhead, the pink, orange, chartreuse or hot red marabous just like you’ve been fishing in the rivers swung confidently along the tidal seam is your ticket to success…that along with a fair amount of time and modicum of luck. 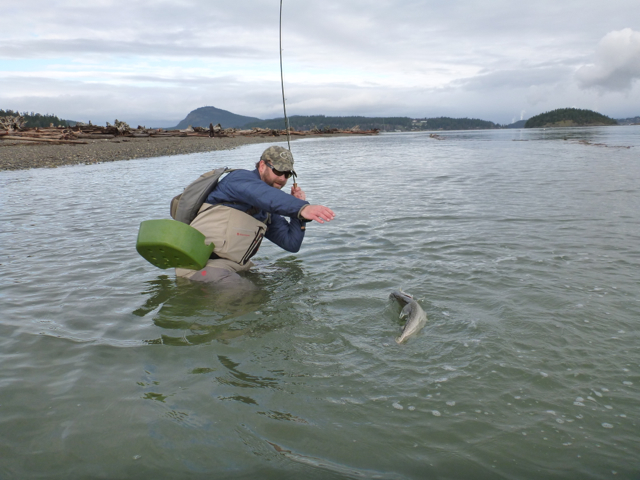 Lakes
Slow is the operative word for our open regional stillwaters at the moment. Pass, Lone and Squalicum are producing a few trout, mainly on micro-leeches, woolly buggers and bloodworm patterns. Most guys are seeing a fish or two for several hours spent. Nonetheless, fishing is fishing and still trumps cleaning the garage over the warm and pleasant weekend. The boating restriction was recently lifted from Fazon Lake. While we haven’t heard many reports from Fazon yet, you can certainly now get the pram or float tube out on the water to fish the edges of the lake. Lake fishing tends to pick up toward the latter part of February and can kickstart into great as we roll into March. Plus a number of productive eastside lakes will open March 1st, so it’s a wonderful time to get tying and planning a trip to your favorite water. The biggest news on the lake front is that we get to welcome stillwater expert Phil Rowley back to Bellingham on February 18th. The Confluence Fly Shop and Fourth Corner Fly Fishers will be co-hosting Phil at the Bellingham Golf and Country Club as he presents “Tactics for Tough Days”. Don’t miss it! 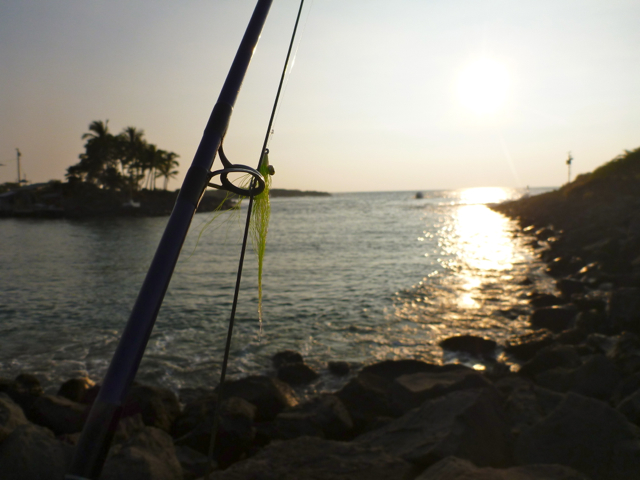