As we slip into the new year, the weather remains frightfully cold and pleasantly sunny and the rivers have remained in shape for longer than their fair share of time. There’s another several days of cold clear skies on the horizon and then we settle back into that winter rain we’ve come to at least deal with. The Skagit and Nooksack have produced some steelhead and a lot of bull trout of late and there’s even been some chilly but fishy days on our local year round lakes over the last few weeks. We’re finding the odd fish out off the beach and doing our best to mix it up in our usual fashion. It’s so easy to fall into the cyclical nature of your seasonal fishing calendar and enjoy the same reliable fisheries that have brought you smiles in years past. Make your 2016 resolution to try something new this year. Fish a saltwater beach if you haven’t, pick up a two-handed rod for the first time, target a new species or learn to tie flies. You may find yourself both surprised and reinvigorated. We are here to help. 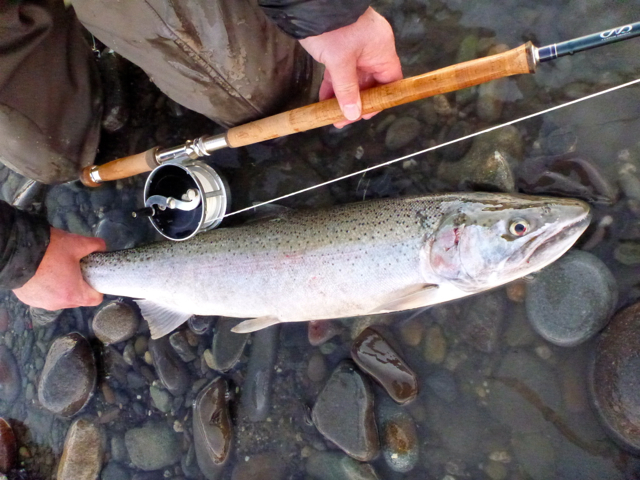 After dealing with an over abundance of H2O during much of November and early December, it’s refreshing to have pretty much all of our rivers at fishable flows for a change. We have found a number of winter steelhead, both hatchery and wild on the Nooksack and Skagit Rivers. Elsewhere in the region, the Olympic Peninsula rivers have been producing well, as has the Vedder in BC. Lower, clearer water calls for smaller presentations like Hoh Bo Speys, Marabou GP’s, Well’s Pink Shrimp and Pick Yer Pockets. On smaller water like the NF Nooksack or NF Stilly, trout beads and small egg patterns can also be very productive. When the water is cold, look for steelhead in slower runs and fish structure like boulder gardens and around log jams. Steelhead seek refuge in these areas when the water is clear and with a lower metabolism in the icy flows, don’t have the energy to hold in faster water. On bright and sunny days, don’t overlook shallow riffles either. The overhead cover provided by choppy water makes these areas very desirable holding water for steelhead as well. As the weather gradually warms, look for more steelhead to enter our rivers. The bull trout fishing on the Skagit and Sauk has been fantastic, with char taking a variety of patterns from whatever you happen to be swinging for steelhead to egg patterns and flesh flies. We’ve run across some very portly bull trout this season that appear to have shored up to an all you can eat buffet. Dali Llamas, White Zonkers, Split Decisions, Glo Bugs and Trout Beads have been working well for bulls. While not a lot of folks seem to do it, whitefish offer a perfect excuse to exercise your 3 or 4 weight and soak up some sunshine on the Skagit or Nooksack. Indicator rigs with small #16-#18 dark nymph patterns or small egg patterns work well and can put you on a lot of whitefish, which school this time of year. Look for deeper pools and inside corners of riffles. Typically where you find one, you’ll find many. Many of our local rivers close at the end of January but for a few short sections so now is the time to get out. Once the Puget Sound rivers close, we’ll be shifting most of our steelhead outings to the Vedder and Squamish or myriad rivers on the Olympic Peninsula. 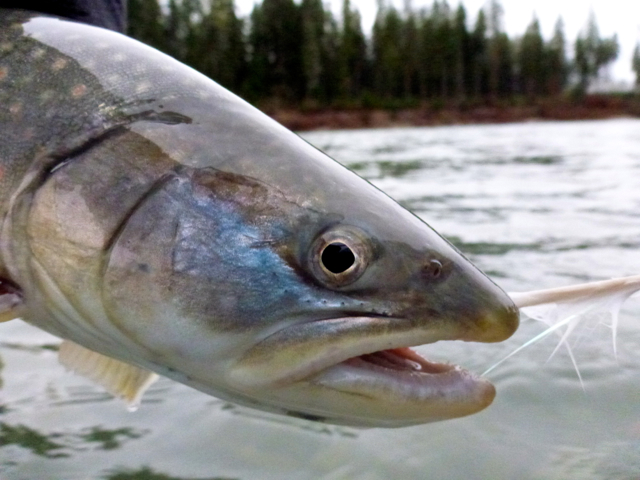 While winter hosts fewer cutthroat, bull trout and salmon than you’ll encounter in the spring and summer months fishing northern Puget Sound, there always seem to be enough around to keep it interesting. When the rivers are out, or you’re looking for a change of pace, the beaches usually have something to offer the solitude and beauty you typically find there. Small clouser minnows, white or olive Conehead Squids, Rolled Muddlers, and chartreuse or olive Lefty’s Deceivers are worthwhile flies to fill your box. January and February off Whidbey Island or the Strait of Georgia does produce sea run cutthroat, resident coho and feeder blackmouth along with the occasional winter steelhead if you’re incredibly fortunate. Besides, you’d better get out and practice your beach casting for the annual fry outmigration in early spring. We’ll have pink and chum fry coming out this year en masse to attract a variety of piscatorial predators. 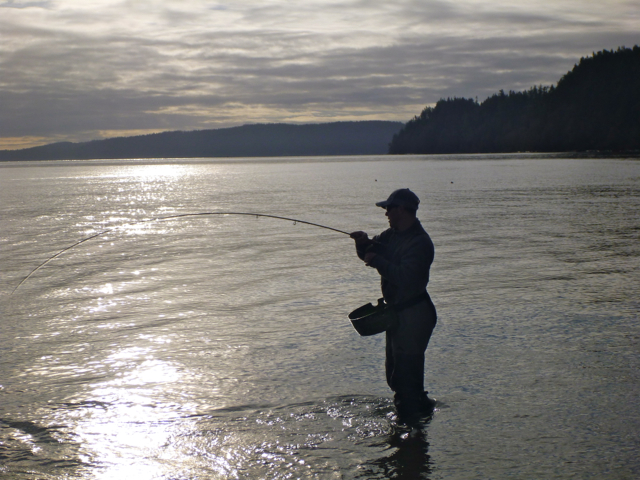 Folks have been finding some trout at Pass and Squalicum this winter on those warmer afternoons when the mercury climbs above freezing. While the fishing is arguably better as we enter into spring, it’s not a complete waste of time to load up the float tube, pontoon or pram and enjoy an early stillwater adventure. During winter, small midge patterns like Palamino Midges and Griffith’s Gnats will even take some trout on the surface during a hatch. Subsurface fishing remains more productive and Black/Red Simi-Seal Leeches, Seal Buggers, Bloodworm patterns and minnow-imitating streamers fished slowly have been catching fish. Fazon Lake will open to boating on January 28th and will provide yet another winter lake option. Speaking of lakes, The Confluence Fly Shop will be co-hosting stillwater guru Phil Rowley again in mid-February. Clear your calendars and stay tuned for more information on Phil’s speaking engagement.