As the temperature heats up, our desire to wick away the sweat and lethargy of a humid day by retreating to the water grows exponentially. It’s nearly summertime in the Pacific Northwest and just about every fishery that’s going to be available to enjoy is around the corner. Just about. May was a rollercoaster of on again, off again discussions about our upcoming fisheries and we’ve been mired in daily uncertainty about whether or not we’d get to spend any time fishing our Puget Sound rivers this summer, or what the saltwater salmon fisheries would look like a few months down the road. The wheels of government are now slowly grinding their way forward and we should have the opportunity to fish more moving water within a week or two. I guess better late than never. While not opening on their normal dates, we expect the main portions of the Skagit, Stilly, Nooksack and Skykomish to open shortly with Federal approval and are very anxious to take to the water. Lowland lakes continue to produce stocked trout with some holdovers, the spiny ray fishing has been fantastic and we continue to venture to our saltwater beaches in search of cutthroat and whatever else we may find. Fishing is our favorite way to beat the heat and we imagine we’re not alone in that sentiment. Thanks to everyone who came out to our BBQ last month to help us usher in another year as your local fly shop. The weather was decent, many a fabulous Echo, Sage and Redington rod was cast, the turnout was solid and the food was not to be missed. We might even still be a little full. 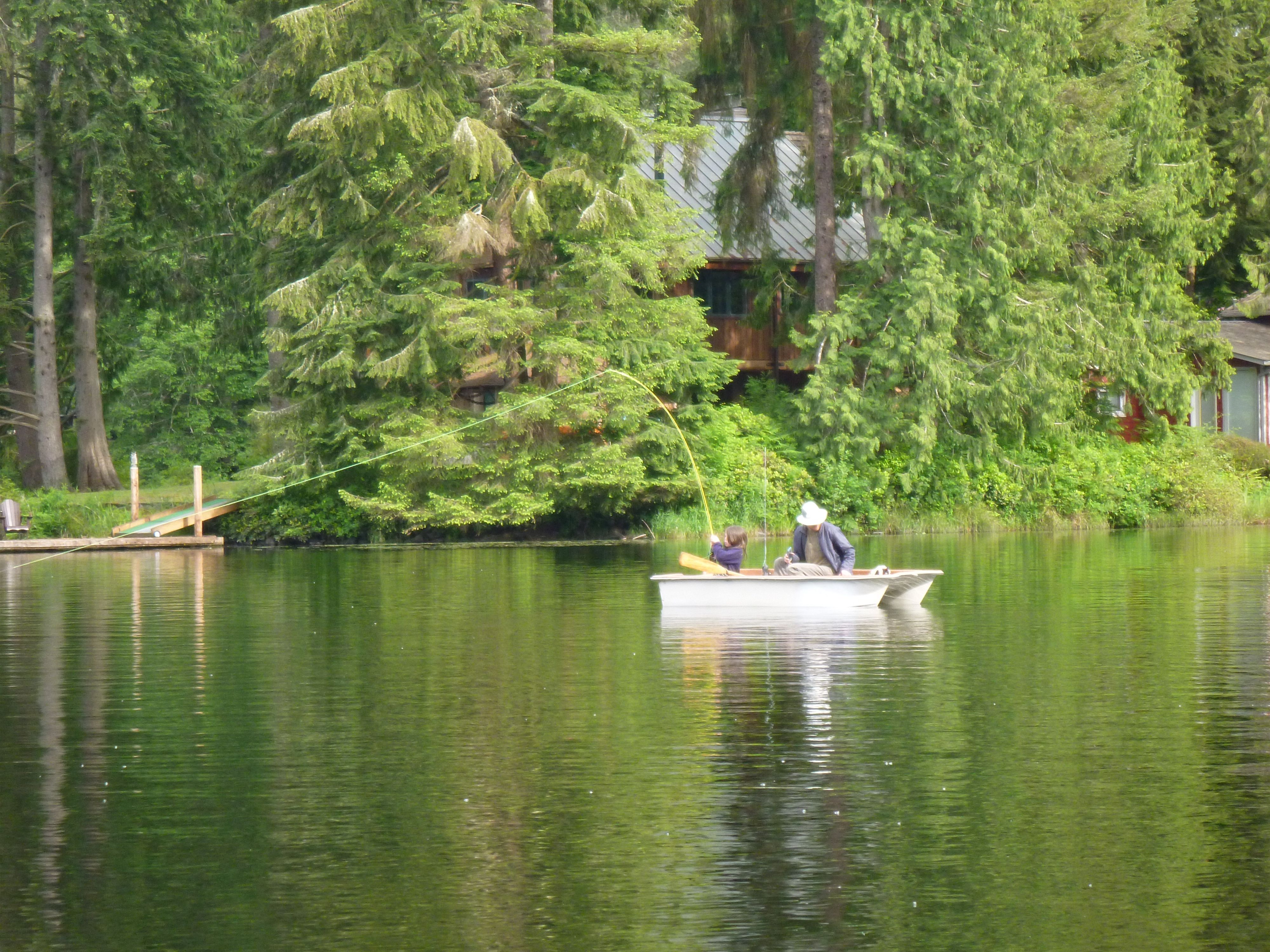 Lakes
Drive a few miles in just about any direction and you’ll eventually run into a lake that is producing well. Our local lakes like Padden, Toad, Cain and Silver are still fishing for rainbow trout. Quality fly only lakes Squalicum, Pass and Vogler are producing some very nice fish as well. Squalicum received another plant of larger triploid rainbows in May and the evening midge emergence has been fishing strong. The same assortment of Carey Specials in peacock, olive, red and chartreuse along with small Woolly Buggers and Pumpkin Heads in brown and olive are bringing trout to net. As the weather warms, make sure you have a full sinking line like a type 6 in your tackle bag. Many lakes have already stratified and you will often find trout stacking in the cooler water below the thermocline as the surface temperatures heat up. East of the mountains and into the BC interior, June promises continued hatches of a variety of bugs including chironomids, damsels, callibaetis mayflies and traveling sedges. We are well-stocked on stillwater flies for around the region so be sure to stop by pick up up the hot patterns prior to your next trip. 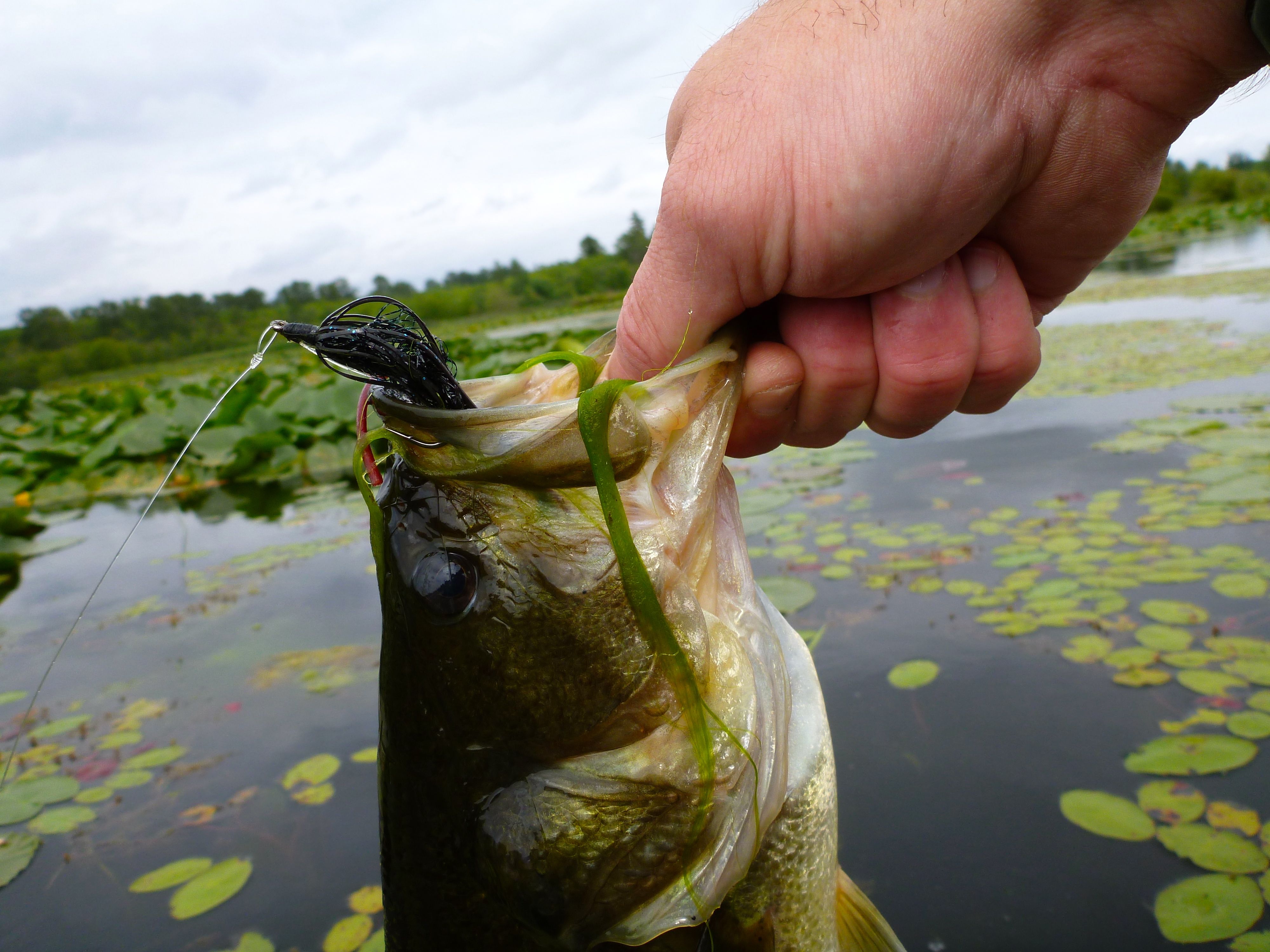 We’ve admittedly spent a disproportionate amount of time the last several weeks fishing bass and panfish. Surface activity on poppers has really picked up and made for many memorable, exciting visual takes. Patrolling the edges of a weed bed or field of lily pads with a weedless Frog popper on a warm and windless late spring evening is definitely our idea of a good time and this fishery typically persists well through the summer. Hexagenia mayflies should begin appearing on Lake Whatcom in another few weeks and become irresistible to smallmouth in the waning hours of daylight. Look for extensive hard packed clay/silt shoals as these are the habitat areas the giant yellow mayflies favor and hatch around. Find the swallow activity concentrated around these shoals and you are not far from the action. Just a reminder as we slide into summer, lake temperatures above 67 degrees can be lethal to trout and they can become severely stressed when played. We’re not there yet, but as the weather heats up, try to limit your fishing to early or late in the day when the surface water temperatures are cooler and play your fish quickly. If you’re not afraid of the dark, Pass fishes really well after twilight for big browns. Think big black Woolly Bugger or Zonker. 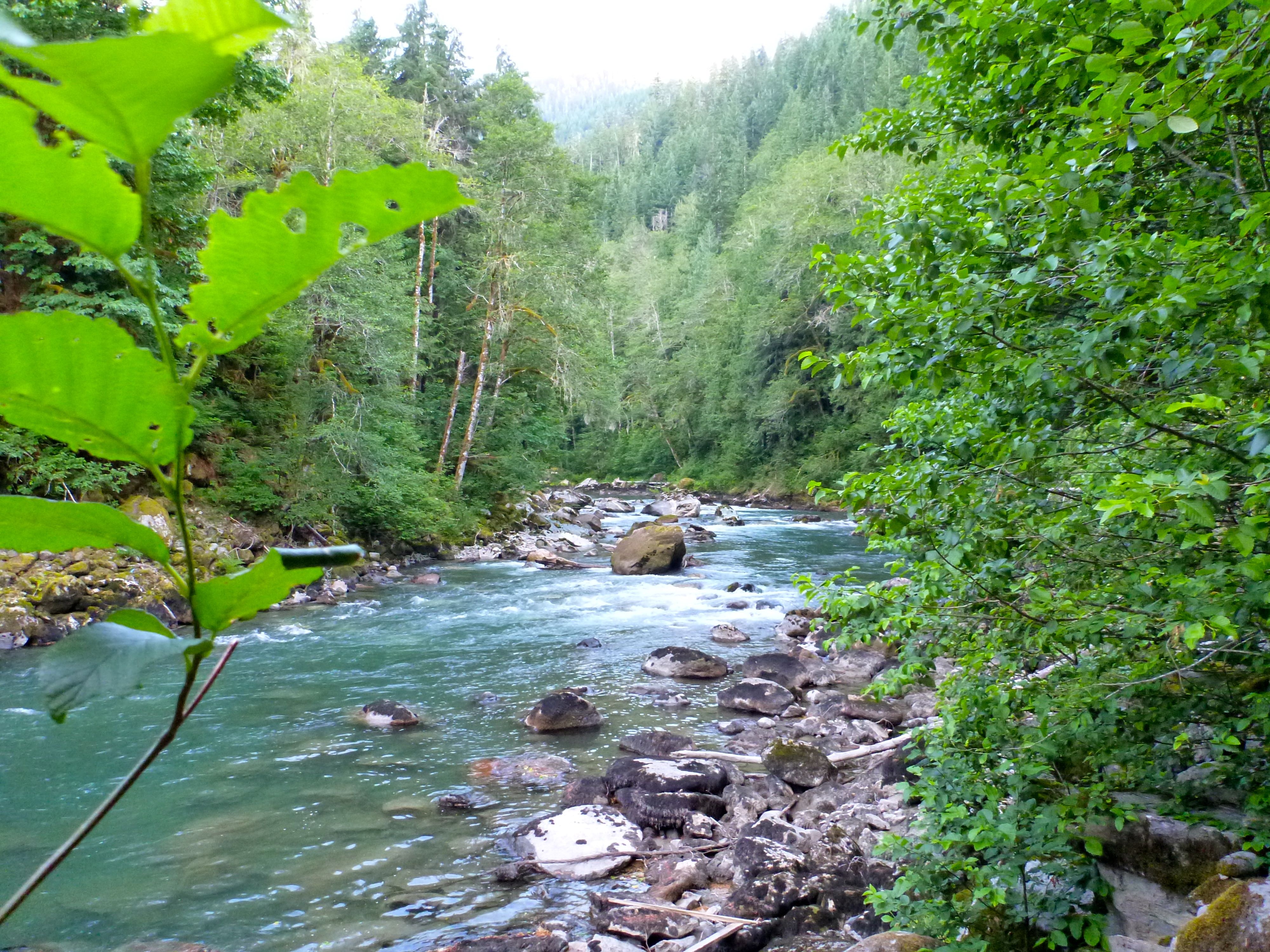 Rivers
The Saturday before Memorial Day marked the opener of a number of rivers and tributaries above anadromous fish barriers like the NF Nooksack above Nooksack Falls and the upper SF Nooksack above Wanlick Cr. Not a lot of reports coming from the high streams yet. Most of our moving waters jumped with this past weekend’s scorching weather and have a bit more flow than we’d like. As they drop, your typical attractor dry flies will produce very well with Stimulators, Royal Wulffs, Royal Trudes, Elk Hair Caddis, Parachute Adams and the Purple Haze being consistent winners. Early in the season, a small BH Pheasant Tail or Copper John fished as a dropper off the bend of your dry fly often attracts those fish that are slow to move to the dry in the colder water. East of the hills, the Methow and most of its tributaries are open as well. Methow flows are still on the higher side, but the visibility is good. Streamer fishing with Kiwi Muddlers and Sculpzillas will appeal to some of the larger rainbow and cutthroat in the system and as the water drops, hatches of caddis, PMD’s and yellow sallies will offer some fine dry fly opportunities. Once the quagmire of governmental red tape peels away, we should have a lot more options for moving water, including the rest of the Nooksack, Skagit, Stilly and Skykomish. Summer fishing on the Skagit for bull trout is one of our favorite past times and a fine way to cool off as a gentle breeze funnels down from the snowy slopes of the Picketts. Big streamers like the Dali Llama in black/white and olive/white along with CH Double Bunnies are some of our go to bull trout patterns. For summer steelhead on the Stilly and Skykomish Rivers, a mix of bright and dark marabou patterns along with traditional summer flies like the Green Butt Skunk and Purple Peril are worthwhile to have on hand. As always, match your flies to the water conditions. 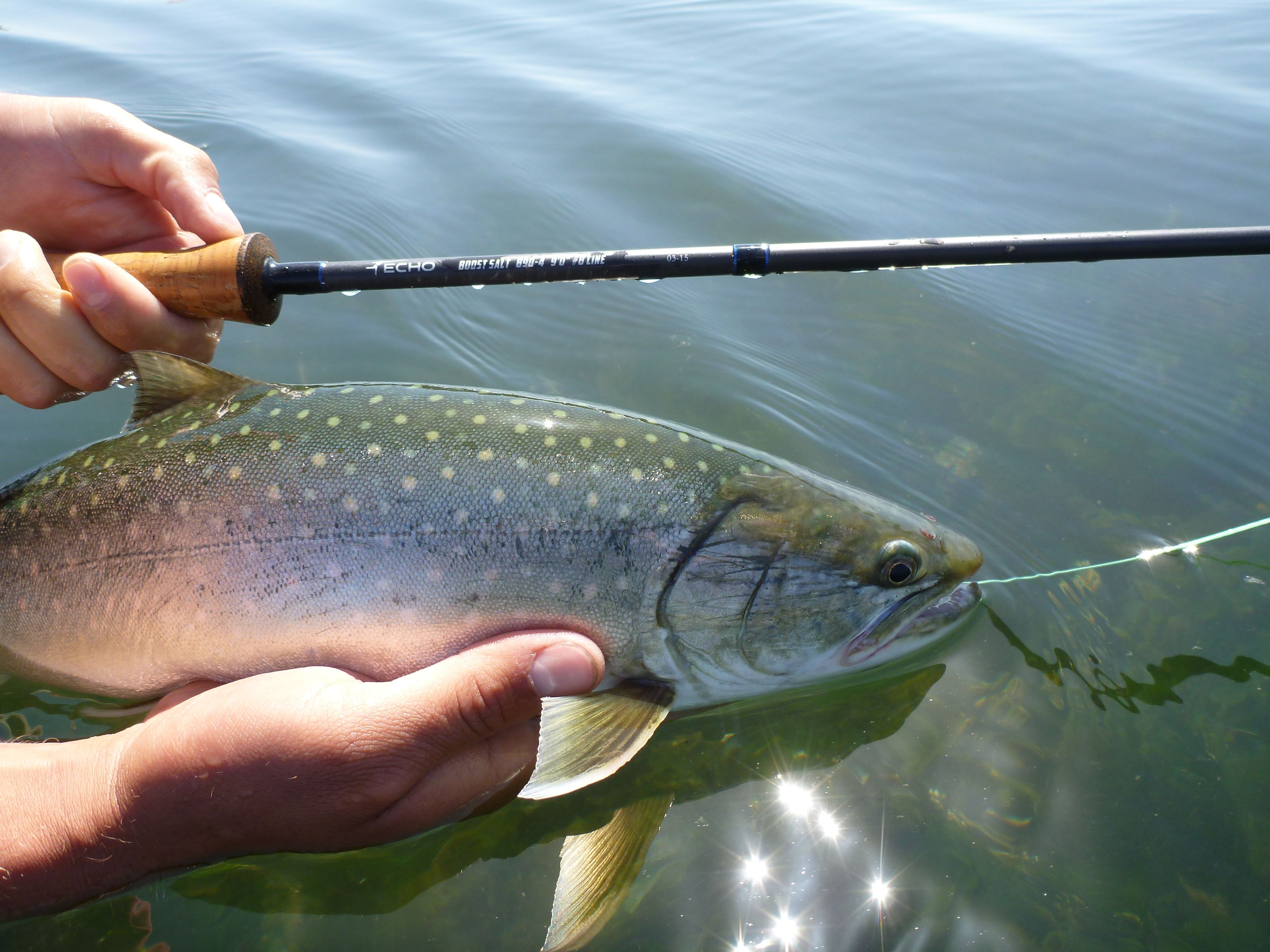 Beaches
From the reports we’ve gathered, sea run cutthroat fishing in the Sound has remained consistent, with white or olive Conehead Squid patterns, Sea Run Buggers and small olive/white Clouser Minnows getting the job done. Sea run bull trout continue to swim the channels and beaches around Whidbey and Camano Islands as well, though the fishing has been hit and miss. We are hearing of the odd cutthroat showing up around the Strait of Georgia beaches in north Whatcom County as well. It’s not looking like we’ll have a coho season in the Sound this year, but should have some chinook fisheries coming up in July. We are planning to use it as another great excuse to get out on the open water and target chinook a little later in the summer with large herring and squid patterns. I had the good fortune to spend a few days on the Yucatan in Mexico in early May. While it was more of a family trip than a fishing excursion, I did manage some worthwhile hours on the flats pursuing bonefish. The area around Boca Paila is stunningly beautiful and offers extensive flats swarming with bonefish, barracuda, snook, baby tarpon and even the elusive permit. The bonefish average 2-4 lbs. and are very obliging toward tan Crazy Charlies, Gotcha’s and various shrimpy concoctions on a 5 or 6 weight rod. I fished a Sage Salt 590 and Rio’s 5 weight Bonefish Quickshooter line and would have a difficult time selecting a more suitable combination for bones in the Mexican Caribbean. The Confluence Fly Shop is proudly putting together a hosted trip for late winter/spring of 2017 to fish the flats around Ascension Bay. If you’re interested in learning more about the details and joining the adventure please email me at scott@theconfluenceflyshop.com. 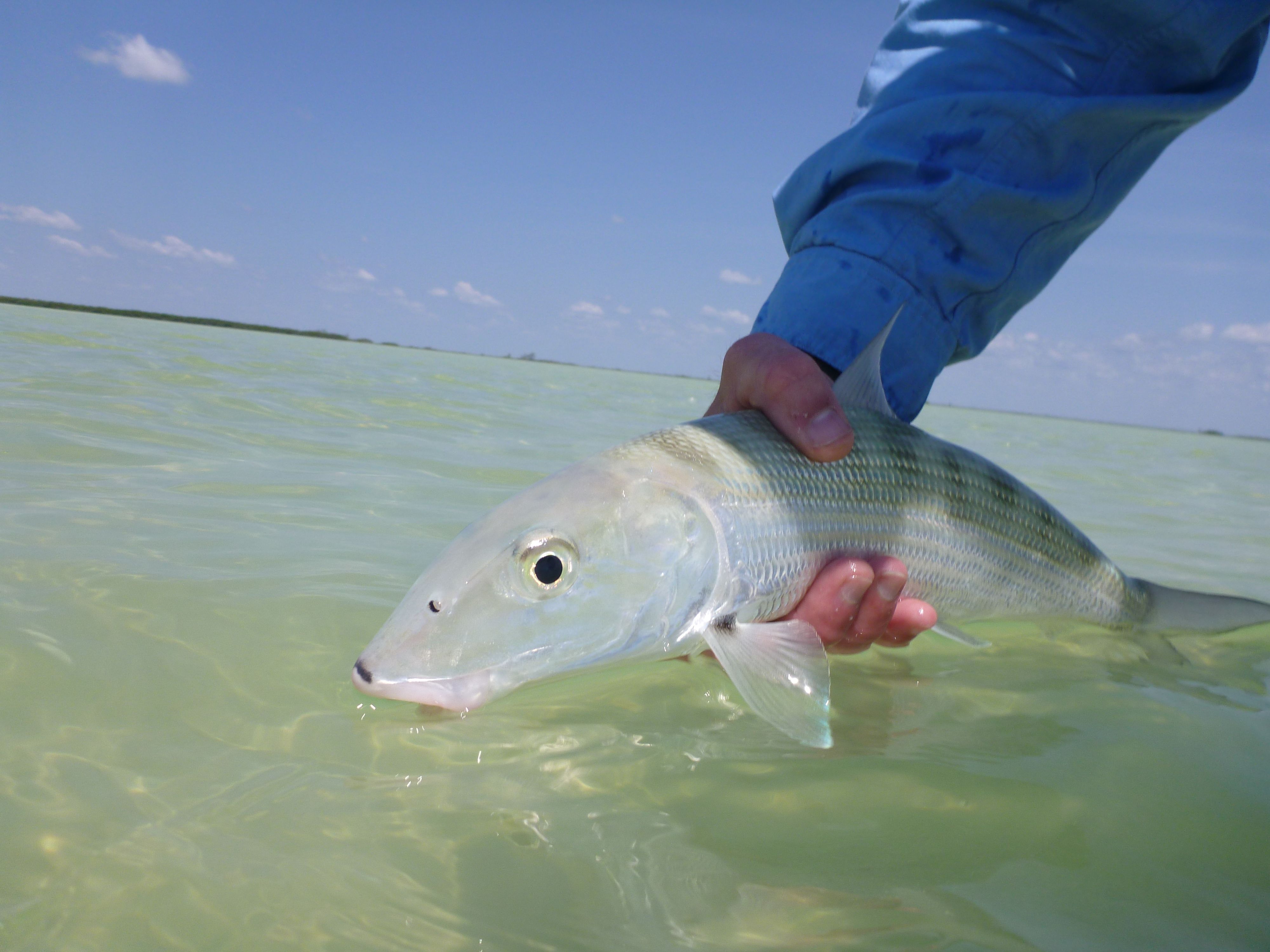