Winter continues to embrace the Northwest in a relentless bear hug. Sheets of sleet, freezing rain, snow, ice and sometimes heavy wind remain an almost weekly occurrence, and while the foothills and forests sure do look pretty all blanketed in fresh snow, we’re kind of ready for things to thaw out and warm up. We’ve had a few teasers of sunny afternoons, steam rolling off the lakes and the sense that things might really start to happen, and then the mercury plummets, the dark clouds race in and we turn the clock back a couple of months. I saw a skunk cabbage doing it’s darnedest to nose up through the marshy soil along a local lake the other day, only to be powdered in wet, heavy snow the following day. Spring is trying to happen. We do what we can to help it along. The days are getting longer and opportunity feels like it’s just on the horizon. Get your gear in order, get your flies tied, come get the things you can’t live without at the Confluence Fly Shop as we are hopefully not too far away from the start of another awesome fly fishing season in the North Sound. For the record, our season never really ends but the winter can be a bit sparse in terms of local fishing opportunities. If you’re not quite ready to brave the cold, there’s some pretty fun fishing related events happening in the community for you to enjoy, from the 2017 Fly Fishing Film Tour to NSEA’s annual fish trivia night. 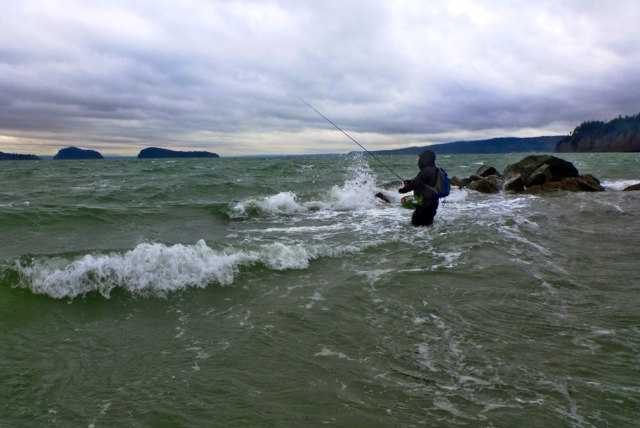 Rivers
With rivers and streams in Puget Sound closed until June or nearly that, your best options for moving water are on the Olympic Peninsula or north of the 49th parallel in the Fraser and Squamish Valleys. The Peninsula has fished pretty decent this year and we get successful reports from customers weekly from customers who found a wild steelhead or three when the rivers were in prime condition. Everything from the Sol Duc to the Hoh has been getting some fresh wild steelhead, you just have to watch the weather closely. There’ve been some major channel changes on some of the glacial rivers like the Hoh and Queets this past season. If you’re floating a stretch for the first time, be cautious, especially floating Morgan’s to Willoughby on the Hoh. As for flies, I think just about every fish we’ve heard tale of has been taken on something different, from elaborately fancy home tied Intruders to store bought Squidros. Follow the same old sound advice. Fish where the fish are, catch the river when it’s dropping if you can, cover as much water as you effectively can and keep the faith. We’ve gotten many reports from relative newbies this season who’ve encountered their first winter steelhead this year. We always take pleasure in reliving their stories and knowing that they are forever ruined, or at least indelibly marked just like we are. Some of the flies we really dig are Signature Intruders in pink and black/blue, Trailer Trash in the same colors as well as purple/red, black/pink and orange Pick Yer Pockets, black, orange or purple Marabou GP’s, the black/blue or popsicle Foxee Dog and the good old Hoh Bo spey in every imaginable color when the water is running on the clearer side. To the north, the same flies and colors are working on the Vedder, which seems to be having an average season, and we are hearing of a few fish coming out of the Squamish Valley as well. The challenge in the Whistler valley area and even the Chilliwack above the Vedder Crossing bridge has been the sheer amount of snow. Even with the roads mostly clear, finding a snow-free pullout has been a challenge. As things warm up, look for the first fry of the year to begin their ocean-bound migration and for hungry char and trout to be nearby. Prior to the fry emergence, sculpin patterns like the Wounded Sculpin, Exasperator and Sculpzilla will produce well, especially on big bull trout. Once the fry have been out for a spell, Epoxy Chum Fry and natural or olive Bead Head Rolled Muddlers are the ticket. The Skagit below the Memorial Highway Bridge in Mount Vernon is now open down to the mouth. If flows drop to where the bars are showing and the river isn’t completely in the trees, fishing the brush piles and shoreline structure is really effective in the Spring. 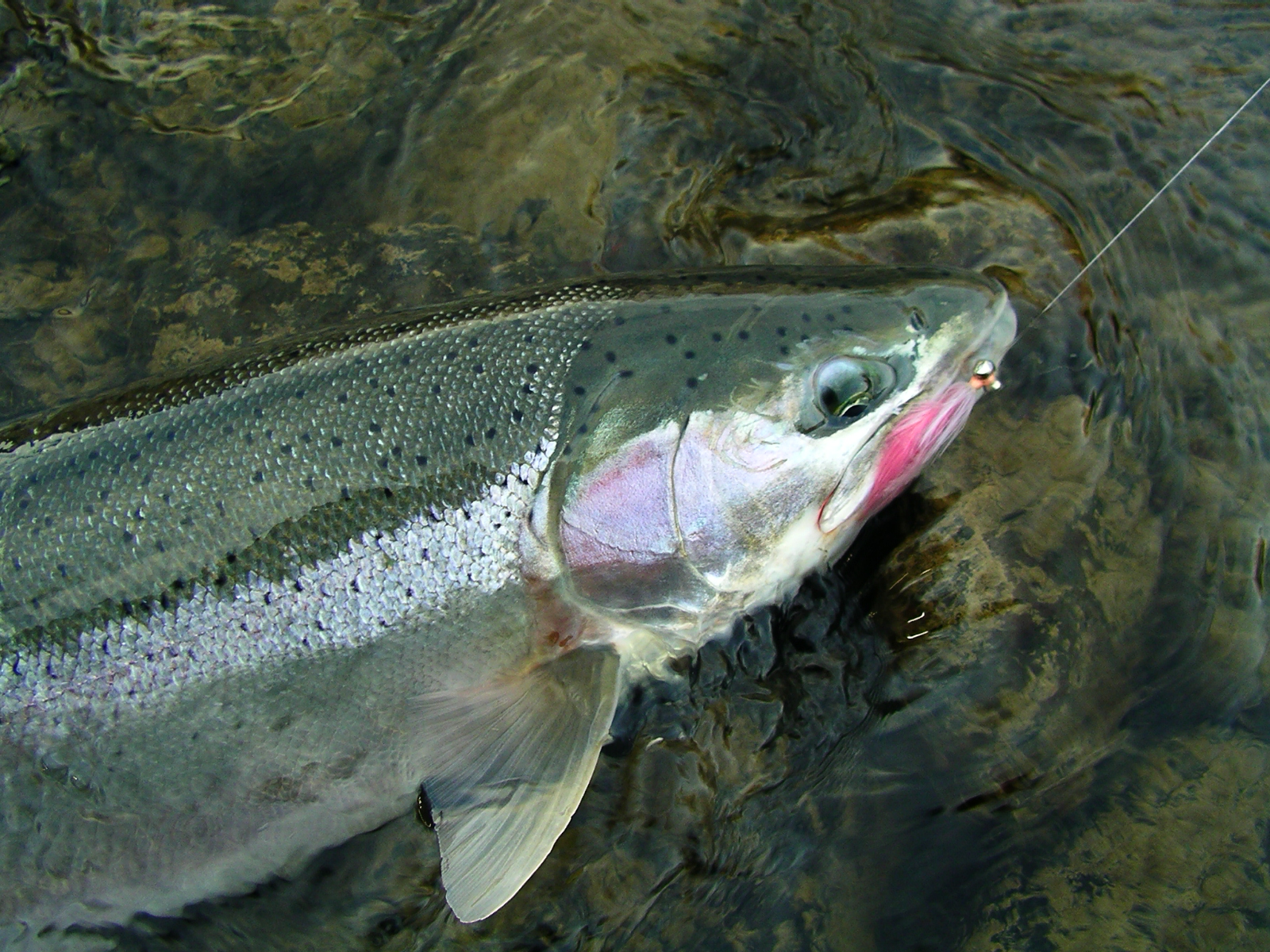 Lakes
Phil Rowley’s February presentation at the 4th Corner Fly Club meeting really got us jazzed up about our upcoming stillwater season, even though we seldom find the same caliber of rainbow trout that he talked about in his Lago Strobel adventure down in Argentina (12-15 lbs. is pretty common). There’ve been a few folks fishing Pass, Grandy and Squalicum of late, venturing out on the short-lived but infinitely pleasant sunny days we’ve seen over the last month. Fishing has been better than expected, with mostly black or brown Simi-Seal Leeches, Woolly Buggers or small Squirrel Leeches working well. Bloodworm patterns are working too, fished slowly near the bottom. March typically ushers in the first decent chironomid hatches. If you’re still struggling with the chironomid game, we still have a few copies of Phil Rowley’s Conquering Chironomids DVD series available at the shop. These are about the most comprehensive and straightforward resources we’ve found, short being of good pals with a chironomid veteran who can show you the ropes. Chironomids make up such a substantial portion of the trout’s springtime diet in most lakes that they deserve a prominent place in your fly box. Lone Lake on Whidbey was recently replanted, thanks to generous donations from the Whidbey, Fidalgo, Olympic Peninsula and Evergreen Fly Clubs as well as private donors. After a disappointing and widespread summer kill on the lake, it was stocked with 1500 rainbow trout averaging about a pound as well as several broodstock rainbows in the 6-8 pound range. There’ve even been a few fish rising to midges in the afternoons on Squalicum along with a quiet little lake where I walk. Stillborn midges, Palamino Midges, Griffiths Gnats and small Parachute Adams cast to rising fish work well, though is still typically less productive than fishing subsurface this time of year. Catch them on your terms though right? We’ve yet to hear any reports from the year round Chuckanut lakes this year, but aren’t surprised given the frosty weather. Expect everything to be a little behind schedule unless we experience a significant warming trend. 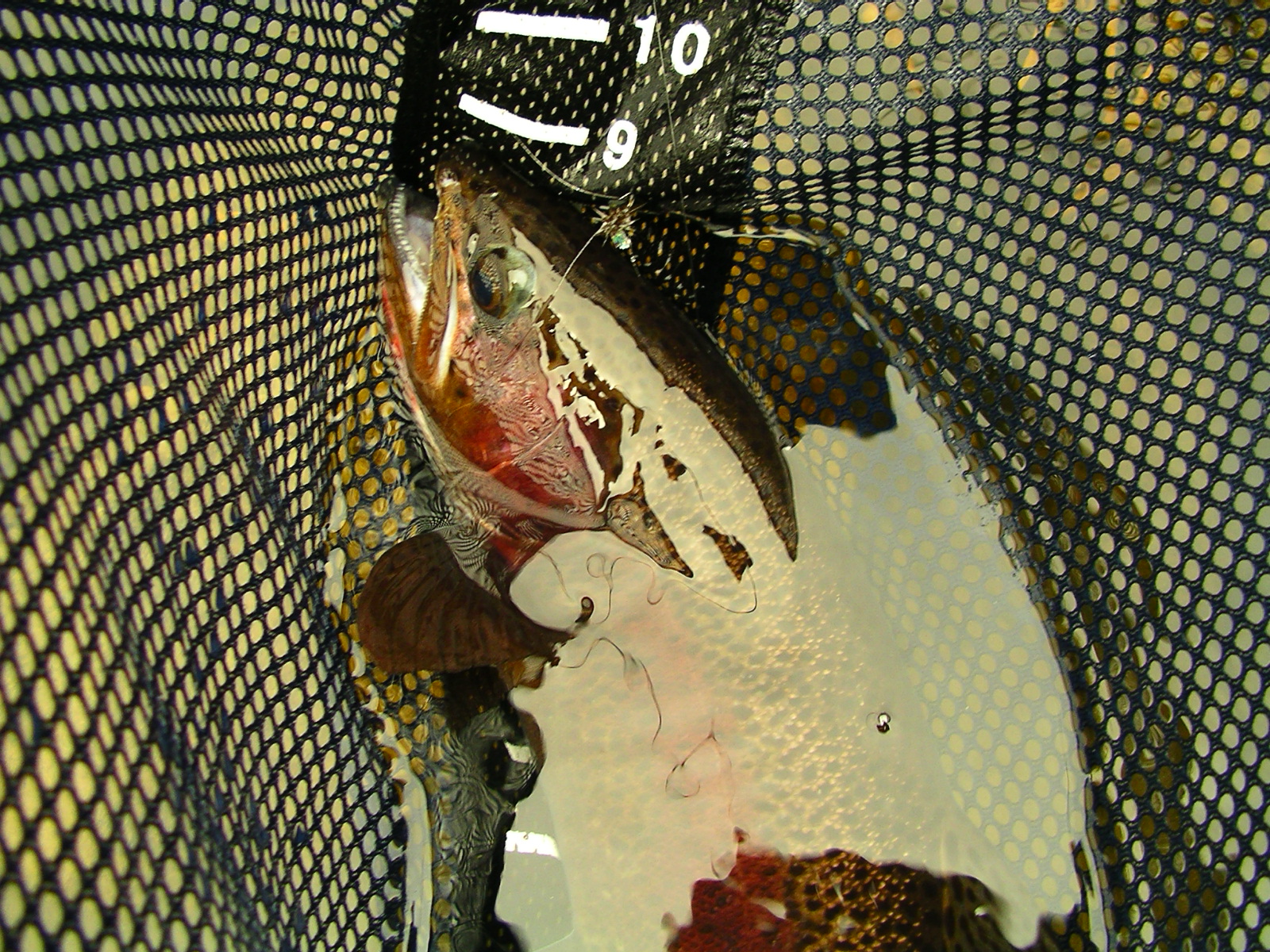 Beaches
Cutthroat fishing has been pretty good in the Hood Canal area of late, with some schools of chum fry already cruising the beaches. The Canal gets a summer run of chum which spawn earlier than their autumn brethren so they usually have fry around before anywhere else. Chum babies, Keta Rose and Epoxy Fry work well. Bring a pair of sheers with you and trim them down if need be. The fry are on the small side right now. Universal searching patterns like Snot Darts, small olive/white, chartreuse/white and gray/white Clousers have been consistent throughout the Sound as well as Sea Run Buggers. Concentrate your fishing around the high tide change, with two hours before and after peak high putting you in the zone on most beaches. This time of year you’ll have a mix of pre and post spawn cutthroat around. Land your fish quickly, keep them in the water and release them gently, especially the skinny ones as they need to build back strength. We are also finding an assortment of resident coho, feeder blackmouth and the odd sea run bull trout off our beaches from Camano to Whidbey, taking the same patterns we fish for cutthroat. While not open for retention, these are always a welcome encounter when chasing cutthroat. Early season forecasts for coho and pink this summer are down according to the WDFW report. The North of Falcon process over the next several weeks will determine what the recreational season is going to look like this summer. Let’s all keep our fingers crossed that things go better than they did last year. 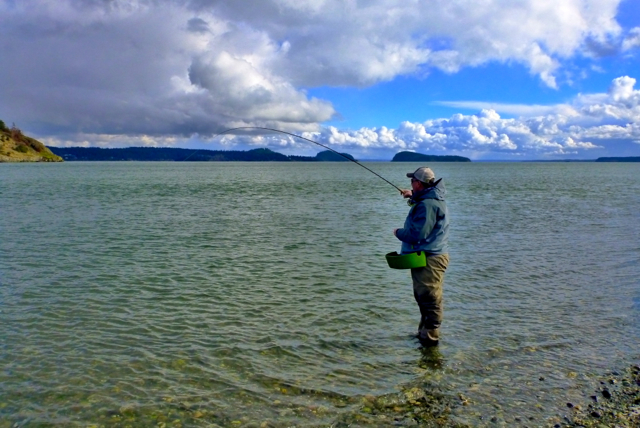