After a long and seemingly endless spell of gray skies, perpetual rain and tireless wind, we’re beginning to catch a glimpse of silver lining in our local forecast. The sun has returned for at least a little while, shorts and sandals are once again on rotation in the weekly clothing line up and our fishing has been pretty darn good lately. I feel like I’ve been waiting for months for that special day when it was legitimately pleasant to be on the water and not working around a stiff breeze, soggy downpour or fighting the chill of unseasonably cold water for the sake of satisfying that un-scratchable itch of a fishing fix. That day has finally manifested itself several times over, from chasing saltwater cutthroat and bull trout in the flat calm and shirt-sleeves of a 70 degree day on Northern Puget Sound to a balmy afternoon on a favorite bluegill lake with a 2 weight glass rod in one hand and an icy Kulshan Bastard Kat in the other. It’s a great time to be on the water. Here’s hoping you’ve had your day or days at some point this year, and if you’re still waiting, may the coming weeks and months be rife with such opportunity. The Confluence Fly Shop turned 4 this year and still continues to grow. Be sure to come celebrate with us for our anniversary BBQ on May 20th, as well as check out some of the exciting other events we have coming up. 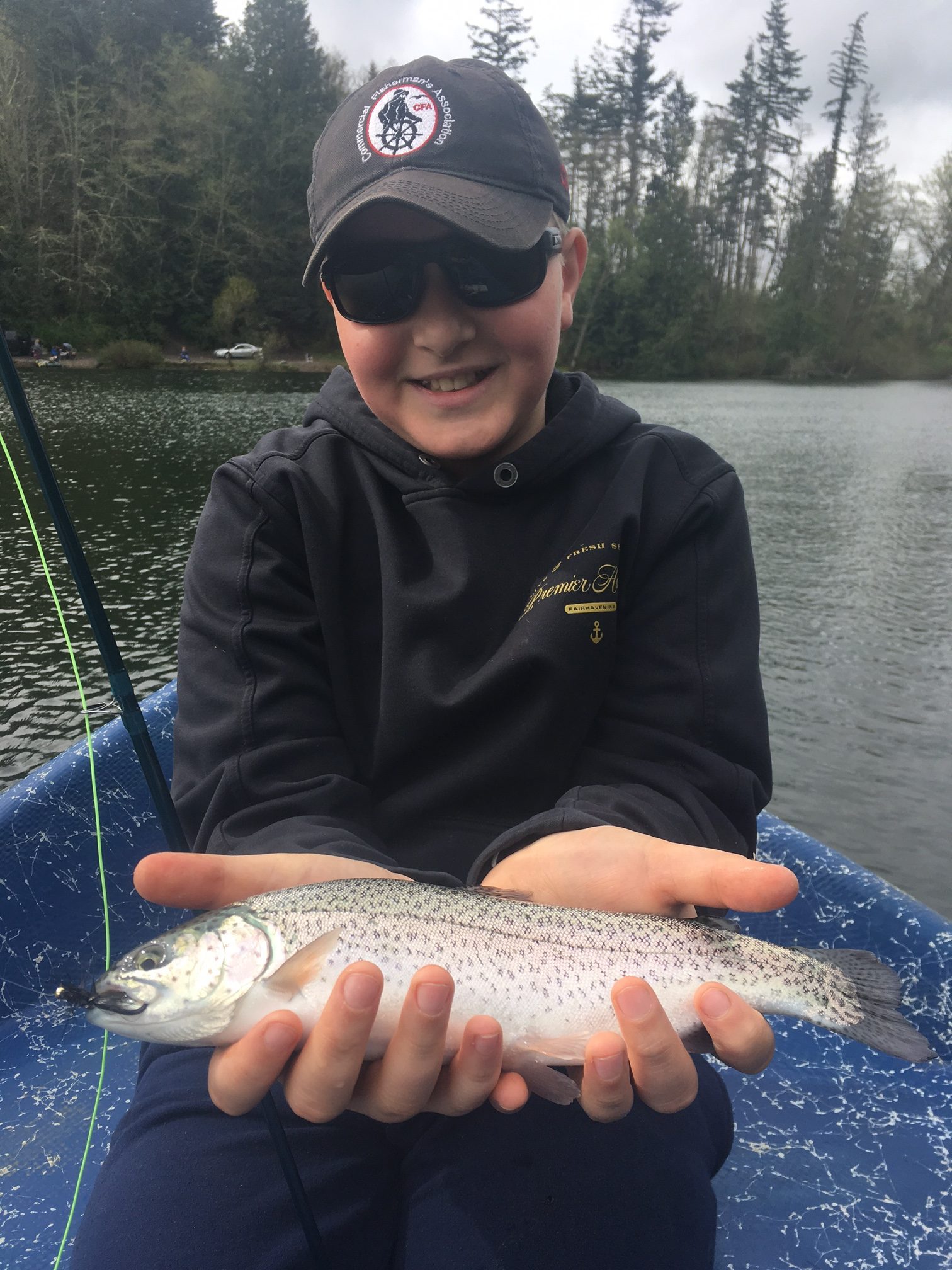 Lakes
It’s primarily a stillwater show in our neck of the woods right now and the opportunities are many after the lowland lake opener at the end of April. If you’re looking for trout, you can take your pick of options from the quality lakes like Pass, Squalicum, Vogler and Lone or hit up one of the stocked lakes like Erie, Heart, Silver, Padden, Cain and Toad to name of few. In the quality lakes, you’ll frequently find bigger fish, but they can prove a bit more challenging. The stocker lakes continue to be fairly easy and great options for beginners, kids or when you just want to lose count of how many 10″ rainbows you’re bringing to net. On the quality lakes, chironomids continue to steal the show. Bring a variety of blacks, olives, browns, tans and Chromies in sizes #12 through #18. We like to fish two flies, often using a Chromie or flashier pattern as the top fly to simulate the more noticeable build up of trapped gases in the exoskeleton as the chironomid pupa ascends toward the surface. The bottom fly may be more muted, often with a copper or black rib. Small leech patterns like the Hale Bopp or Simi Seal Leech in black, olive or brown are working. We are also seeing some afternoon and evening hatches of chironomids and callibaetis mayflies bringing trout to the surface on calmer days. As the weather continues to warm through May and into June, be sure to have some damsel nymph patterns on hand like the Dainty Damsel or Beadhead Marabou Damsel as these critters become more active. While you can certainly endeavor to mimic the insect life you’ll observe on our stocked lakes, the truth is, you’ll catch a ton of fish using attractor patterns like black, olive or brown Woolly Buggers, red or green Doc Spratleys and red, green or peacock Carey Specials. Stick with floating and intermediate lines as the stocked trout remain relatively close to the surface. With continued warm weather, full sinking lines will become increasingly important to include in the tackle bag. During the evenings, we’ve also been getting a lot of rainbows on top using Tom Thumbs and Parachute Adams in #12-#16. 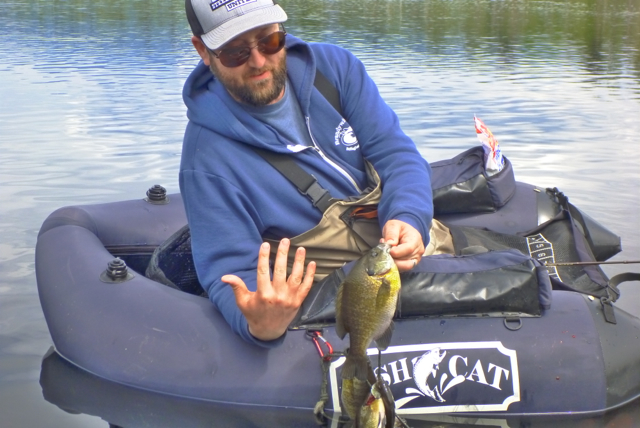 If you’re a warmwater species aficionado; and it’s no real secret that Brandon and I have soft spots for our prickly-spined, rough-scaled, wide-bodied swamp dwelling fish that lurk in the lily pads, things are starting to perk up. Bluegill and largemouth bass are getting more active in lakes like Fazon and Terrell. Smaller dark Woolly Buggers, Marabou Leeches and Beadhead Marabou Damsels are effective for the bluegill while larger offerings like Bass Turds and Divers are good for the bass. Lake Whatcom still remains on the cooler side, so we are looking at another week or two before we expect to see good numbers of smallmouth moving into the shallows to prepare for the spring spawn. If you’ve never experienced the thrill of a hand-sized bluegill muscling sideways on a little 2 weight rod, you’re missing out. These fisheries are a ton of fun for kids and us grown up kids alike. 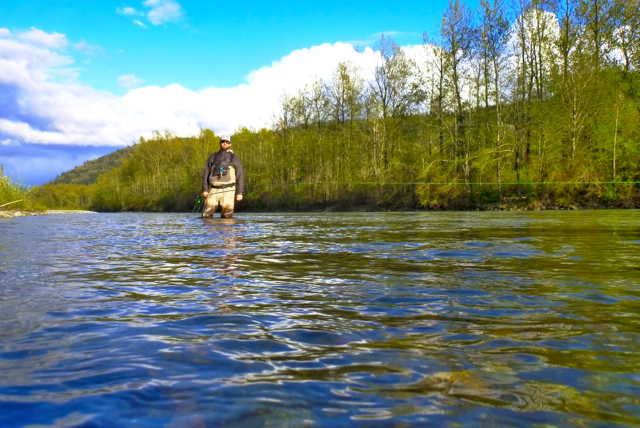 Rivers
With the warmer temperatures, we are seeing most of our rivers on the rise and have a feeling we’re not far from seeing full blown spring run off in the near future. If the Vedder at Chillawack falls below 2 meters (or better yet 1.5 meters) on the BC hydrograph, the river remains open through the end of May below the Vedder Crossing Bridge for fly fishing only and late run steelhead continue to filter into the river. Several of our small streams are slated to open the Saturday before Memorial Day, with most of our larger rivers in North Puget Sound opening in early June. We’ll be keeping an eye on water levels for a better idea about what our early river/stream opportunities will look like next month. There’s a lot of snow in them hills waiting to melt! 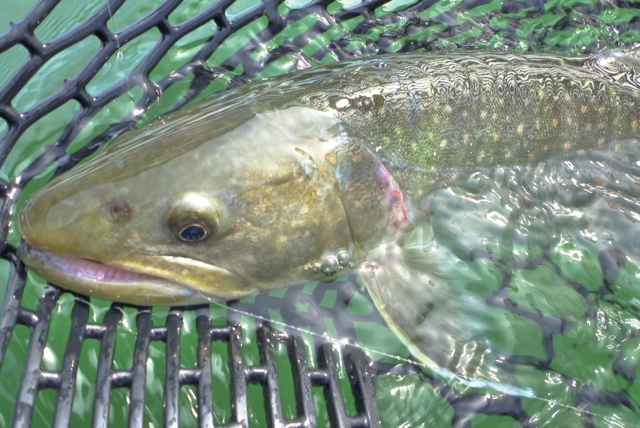 Saltwater
Beach fishing has been decent throughout the Sound. There are still some larger chum fry working their way through the Salish Sea and attracting cutthroat, with the Conehead Squid in white or olive, Rolled Muddlers, small Clousers and Gurgler patterns also getting the job done. We are still encountering some nice sea run bulls too in Marine Area 8. The bulls always seem to favor larger herring or smelt imitations, so bigger Clousers and Deceivers are worthwhile to have in your fly box. If you’re adventurous, own a seaworthy boat and a 10 weight, lingcod fishing is open through mid-June. Fish high density fast sinking lines, big meaty streamers in the 8-12″ range and look for rocky shelves in 30-40 feet of water where you can realistically get your fly down. We’re exploring these fisheries in the North Sound more and more each year. The co-managers have announced our tentative summer salmon fisheries for Puget Sound and while we continue to face some restrictions, it’s certainly much better than last year. The official regulations should be published by early June, but here’s what we are looking at for Northern Puget Sound according to the WDFW.

Marine Area 8-1: Closed May 1 through October 31. Open November 1 through Apr 30 for hatchery Chinook.

Marine Area 8-2: Open August 1 through Labor Day (September 4) for hatchery Coho for shore only fishing from Possession Point (MA 8-2 & 9 Boundary) up to Possession Beach Park on Whidbey Island. Closed to boat fishing May 1 through October 31 except within Tulalip Bubble as described. Tulalip Bubble is open for Chinook and Coho during typical Fridays-Sundays and Saturdays-Sundays starting May 26, but is closed June 17. Open November 1 through April 30 for hatchery Chinook.

One thing to note is that there is no bonus pink salmon limit, however in most areas pink salmon can be kept as part of the salmon daily limit. These projected seasons should not be used in place of the pamphlet as actual regulations may change due to the rule-making process. Outside of our salmon seasons, all marine areas of Puget Sound will remain open for trout fishing year-round. On a final note, please also kindly remember: don’t shoot the messenger. 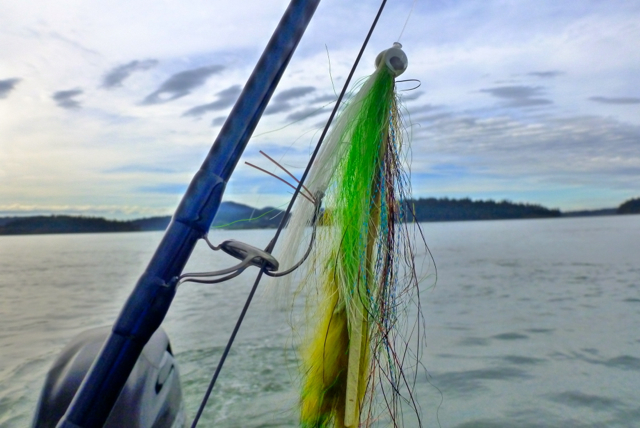