One of my favorite fishing quotes rings especially true during the fall when the beloved season of many seems to come and go all too quickly. There doesn’t seem to be enough time to fish everywhere we’d like and it’s simply too darn good to miss on most of the varied waters we love. Rivers rise and fall, clouds roll in and part for a warm and productive afternoon. Fish are coming, going or gone and we seem to find ourselves nearing winter in the blink of an eye. Make the time to fish during this lovely time of year. You’ll surely regret not going, when in a month or two from now the days are dark and short, the water cold and the fishing is still fishing but not quite what it is right now.

Rivers: The pinks are pretty well on their way out: zombified, humped out and skeletal just in time for Halloween. It was a great season, though the Skagit run seemed a bit down over previous years. At this point, the humpies are better regarded as food for hungry bull trout, rainbow, cutthroat and a host of other critters. Think fondly of the tenacious pink salmon of 2015 as you drift a flesh fly, egg pattern or swing an egg-sucking something-or-other for the eager trout and char looking to consume a little bit of what they’ve left behind. We’ve already seen some piggish bull trout in the Skagit wantonly feeding behind salmon redds and packing on the calories. 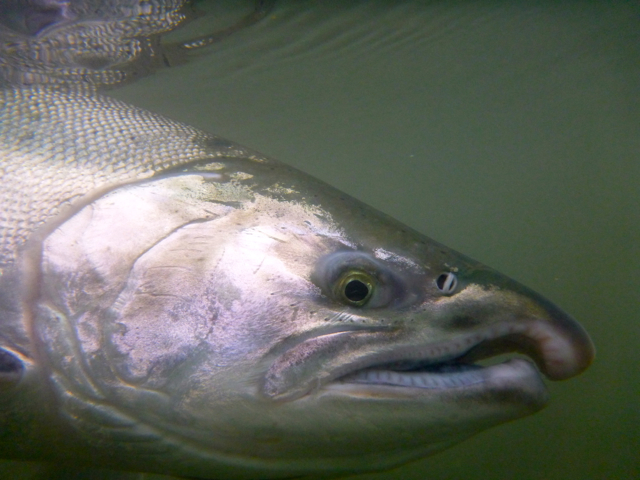 Coho are in the Nooksack, Stillaguamish, Skagit and Fraser system in good numbers. Fly choice for coho is as much a function of water conditions as anything. Under low and clear conditions, green, pink or blue California Neils, green/silver or blue/silver Flash Flies, Coho Buggers, Olive Sparkle Buggers and Rolled Muddlers fish well. With reduced visibility after a rain, larger presentations like Reverse Marabou Spiders, Hareball Leeches or Starlight Leeches perform better, especially in pink or chartreuse. In heavily pressured fisheries like the South Fork Nooksack, smaller and often drabber patterns in olive or natural colors will often do the trick. The old olive Woolly Bugger can be deadly for clear water coho. Floating or clear intermediate lines work best in the slow, froggy, structured parts of the river coho favor. Bull trout fishing on the Skagit has been productive with Sculpzillas, olive/white Dali Lamas and Double Bunnies working well. Make sure you have some egg patterns and white leeches or flesh flies on hand as well. When the salmon do their thing, trout and char throughout the region can become very keyed in on this annual feast of steak and eggs.

Sea run cutthroat fishing on the Skagit has been hit or miss with water conditions below the Sauk being somewhat of a wild card of late. When the lower river and forks have decent visibility, fish Rolled Muddlers, Reverse Spiders and Mickey Finns on a floating line or sinking poly leader around the root wads and shoreline snags. The Stilly water conditions have remained much more consistent with cutthroat being caught from the lower Mainstem and up into the North Fork.

After a virtually waterless summer, we’ve all but forgotten about local summer steelhead, but improved water conditions have reinvigorated the itch. The North Fork Stilly has fish scattered throughout the upper river if you can find them between the rotting masses of pinks. Black or purple articulated leeches, Steelhead Muddlers, black or purple Egg Sucking leeches, Hobo Speys, Green Butt Skunks, Silver Hiltons and Max Canyons are effective fall patterns on the Stilly. Upper Columbia tributaries open today, October 15th and steelhead numbers look pretty good on the Methow. If you’ve ever dreamt of taking a steelhead on a skated fly on the surface, this is as consistent a river you’ll find to do it on. Steelhead caddis, Ska-Oppers, Steelhead Muddlers in natural, black or purple work very well. Subsurface, Egg Sucking Leeches, Hoh Bo Speys, Guinea Spiders and any smallish, dark pattern catch plenty of steelhead on the eastside. Save your heavy sink tips for the dog days of winter. October steelhead are still very willing to move to the fly and a floating line presentation allows you to cover more water more quickly, which is the name of the game when fly fishing for summer steelhead. 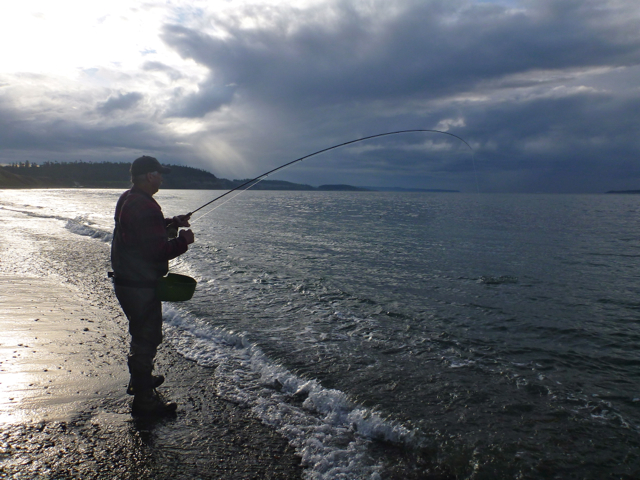 Saltwater: After a solid 3 months of beach fishing, we’re beginning to see signs of the fishery winding down. There are still plenty of coho moving along Whidbey, but the numbers have dropped over the last week or so. It’s still very worth toughing it out, as some of the biggest coho of the season will filter into the Sound between now and the beginning of November. Sea run cutthroat fishing in Northern Hood Canal and South Sound has been decent if you can break away from the big salmon, though many of our local cutthroat have made their way into North Sound rivers. Coho have been staging in Drayton Harbor over the last few weeks and this can be a fun fishery for some nice fish. Typically, smaller sparser patterns like Rolled Muddlers, California Neils and Mickey Finns fishing on floating lines with long leaders work better for staging fish that are no longer feeding. 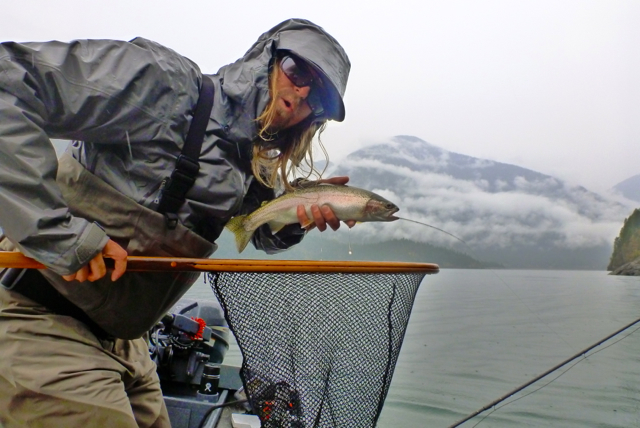 Lakes: Aside from year round local favorites like Pass, Squalicum and Lone Lakes, many of our lowland stillwaters will close at the end of the month. October is feasting time for some of the best trout you will see this season. Minnow imitations worked close to shore, black, brown, grey or white leeches and a variety of small midges have been working on our west side lakes. If you head east or north to BC, small callibaetis patterns, scuds, micro leeches, chironomids and dragon fly patterns have been finding some nice fish. I recently spent a marvelous few days fishing Ross Lake with Ross Lake Resort Owner Tom Barnett and Fly Fish Journal Photo Editor Copi Vojta. The weather was a tad soggy and the valley remained largely socked in with low clouds, but the lake was exceeding calm and fished very well. White and olive bunny leeches, black/white Dali Lamas, olive/white Clouser minnows, and white or olive cone head Woolly Buggers produced many chunky rainbows in the 16-18″ range with a fair number of larger fish. We caught a nice bull trout and a leviathan brook trout as well. Deep trolling with type 6 and 7 lines or motoring along the shoreline casting into the rocky or stumpy banks were most effective. Ross fish grow to large sizes on the lake’s abundant redside shiner population. If you find the shiners, you will generally find the trout nearby. The Ross Lake Resort is a class act operation with friendly staff in a breathtaking setting. If you’ve never experienced this idyllic wild trout fishery settled amidst the stunning backdrop of the North Cascades, you’re missing out. The Resort offers lodging on the lake, some flies and tackle, motor boat and watercraft rentals as well as a water taxi service to remote wilderness campgrounds throughout the valley. The Resort often books up to a year in advance so be sure to start planning your next adventure. 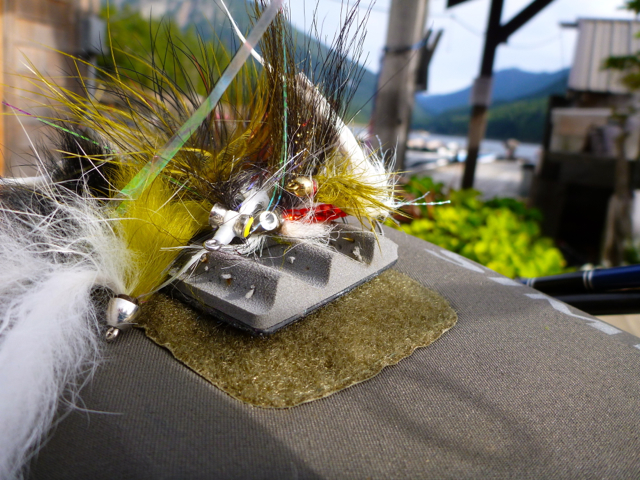