I think it’s spring but I’m not completely sure. Some days the sun is shining and the magnetic pull to the lake is undeniably strong. I launch my float tube, gliding smoothly across the reflective flat waters of the pond. Trout are rising just a few short kicks away. I’ve been waiting all winter for this. I slow my roll, ease into position and begin casting a small black chironomid emerger towards the rise forms. In a blink the wind cranks up to eleven. It begins snowing, then hailing. The sky is dark and the sun is nowhere to be seen. I am gloved and layered in Primaloft and Gore Tex and my teeth are chattering. Within an hour the clouds part and the sun returns, but the wind is still relentless and cold. I am numb from the waist down despite the feverish kicking of fins to maintain my position and not be helplessly carried away to the far shore. I am catching the odd fish on a leech pattern but it is not yet the day I envisioned. Perhaps in another week or two winter will loosen its grip and we can walk outside in T-shirts without risk of hypothermia. Though many of us are pretty well done with winter, it is clearly not finished with us.

As the season changes, so do our fishing emphases. With the closing of most steelhead rivers in the state, it’s time to shift our attention back to trout in lakes and the few open rivers available to us. Bugs are hatching once again, mostly chironomids of various sizes and colors and the swallows are back to dive bombing the lake and putting on a tremendous aerial show in the afternoons. We keep a vigilant eye on the weather and the water temperatures, awaiting that magic moment when the bass and bluegill will stir from their cold water slumber and get turbo charged and aggressive. The fishing scene is gathering steam and it’s time to think about getting out there if you’re not already on the water. Before we know it, there will be so many available open options, the challenge will be in deciding where to go. The pandemic-fueled lust for time in the outdoors has led to some crowding and congestion on the water. People are pretty cordial mostly but if you’re like me and prefer a little solitude when you’re fishing there are many open options out there just off the beaten path. Remember that any lake not specifically listed in the Washington Fishing Regulations is open year-round. Not all of them have the notoriety of Pass or Lone, or the large average trout size, but there are some gems waiting to be discovered…by you! 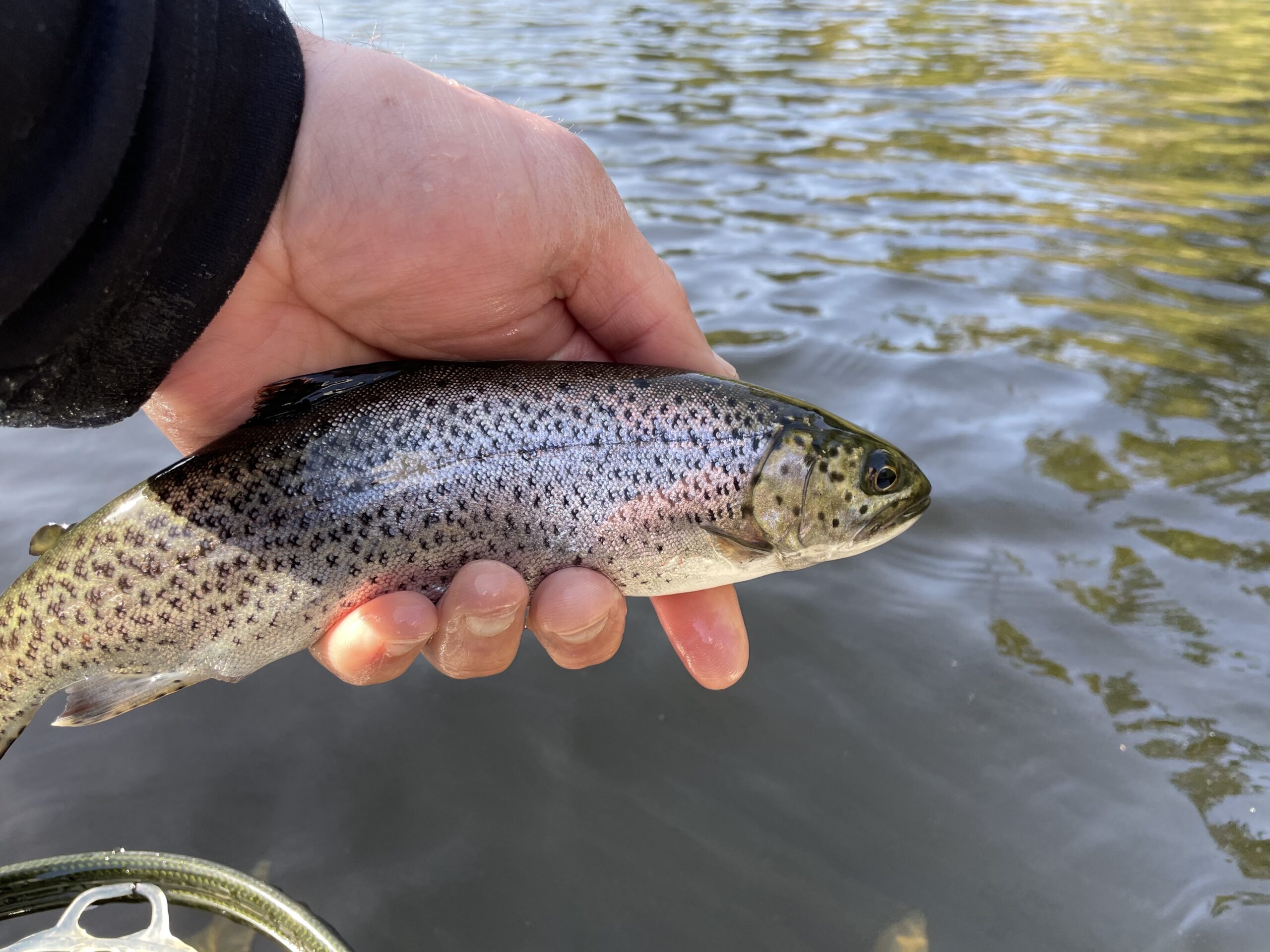 We hope you enjoyed the 2021 Fly Fishing Film Tour from the comforts of your favorite arm chair. It’s encouraging to see so many of our customers getting vaccinated and looking ahead to the little freedoms that have been absent from our lives for over a year. We hope to be able to fill the Lincoln Theatre next year and experience the films together again. Brandon and I each got our first shot this week and look forward to more travel opportunities down the road.

I am still set to host a 1 or 2 week Christmas Island Trip from November 3rd-November 16th, 2021. As of now, the Kiribati republic is still closed to any outside travel through June. They’ll revisit the travel ban at that time and we’ll have a better sense of whether or not we’ll get to go this year. If you’re interested in joining us and haven’t already reached out, drop me an email and we’ll get you more details on the trip.

We are now in our 8th year of business thanks to all of you and are looking ahead to our anniversary next month. I’m sorry to say we won’t be able to have the usual big bbq we typically do, but we’ll have some free raffles and specials going on in May to celebrate and say thanks. Stay tuned for details in next month’s newsletter.

In the meantime, stay healthy, stay safe and be sure to take advantage of the little weather windows when it ain’t so squirrelly out there. Next week is looking promising! 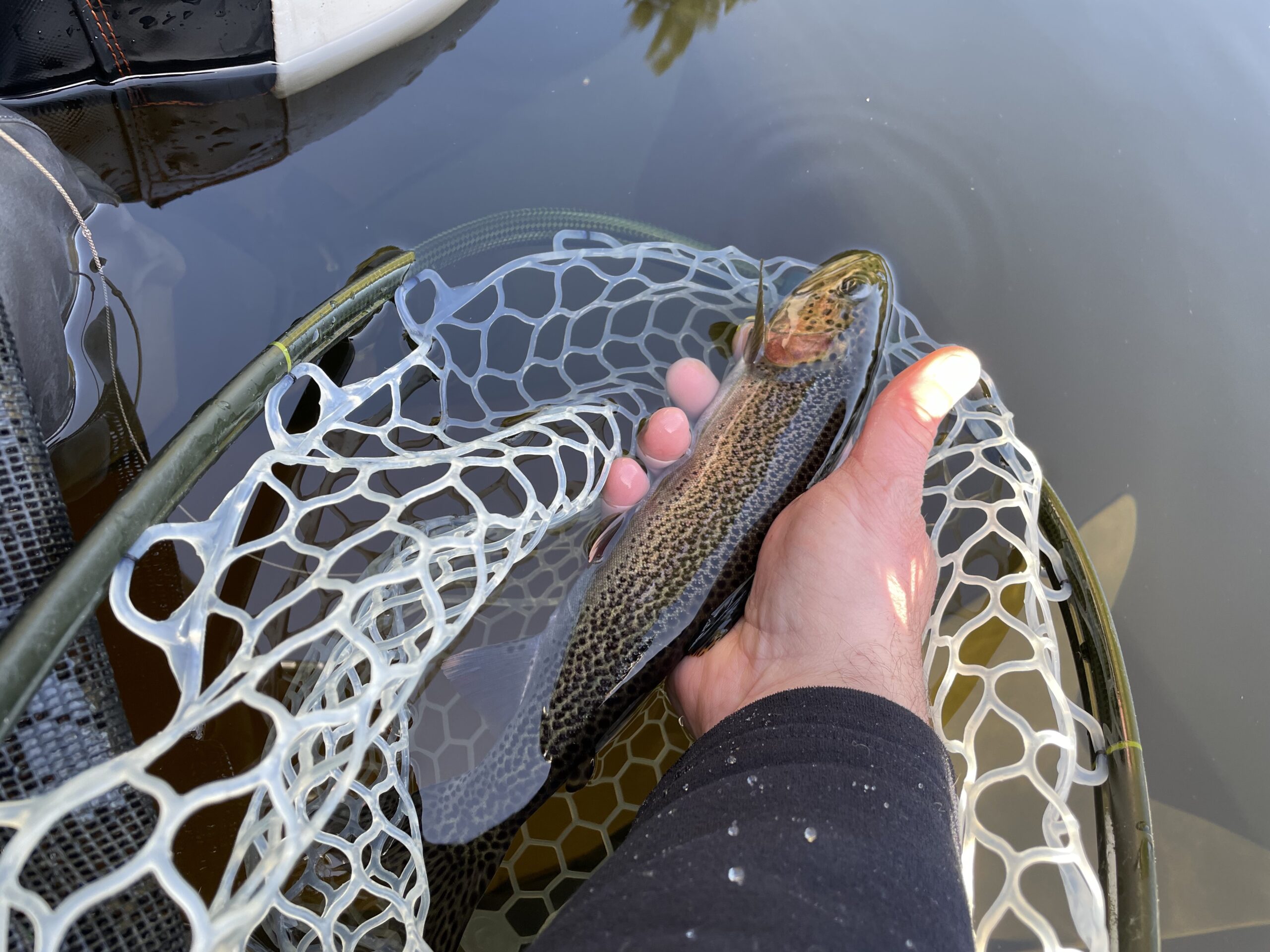 Lakes
Every year I come away from a few months swinging flies for winter steelhead with an incurable urge to bob around on a quiet stillwater and catch trout. I love the steelheading, don’t get me wrong, but it’s a lot of hiking, bushwhacking, rowing, traveling, trying to make nice with the weather and frankly, doesn’t involve a whole ton of catching fish for the most part, not that catching fish is ever a make it or break it part of the deal. By the time late March and April roll around, I’m pretty ready for a change, and the relaxed pace of chilling in a float tube or Dogfish boat trying to figure out the hatch or what’s going to produce for the day is just what I need. The certainty of knowing there are actually fish in the lake somewhere just waiting to be found is comforting, as the assurance of fish being present is a luxury rarely afforded to a winter steelheader.

Pass, Lone and Squalicum are all fishing decent when the weather is stable. Grandy just a received a plant of 2000 catchable rainbows in mid-March, and the shallow lakes of the Chuckanuts and Alger Alps are coming into their prime. If you’re more the leech or bugger-dragging type, Hale Bopps, Slight Leeches, Gold Jiggers, Crystal Buggers and the like are working well. If you haven’t been by the shop lately, we’ve moved some flies around in the bins and have an entire drawer overflowing with Bugger variants. If you like to fish chironomids, now’s the time. We are seeing hatches really start to get going on many waters and the daily emergence will continue to build as the weather warms. Much of what’s coming off now is on the smaller side, #16-18’s, black, gray or red-brown. Bug size tends to increase as the season progresses, so have a variety of patterns on hand. We have a great collection of chironomids to suit any destination. 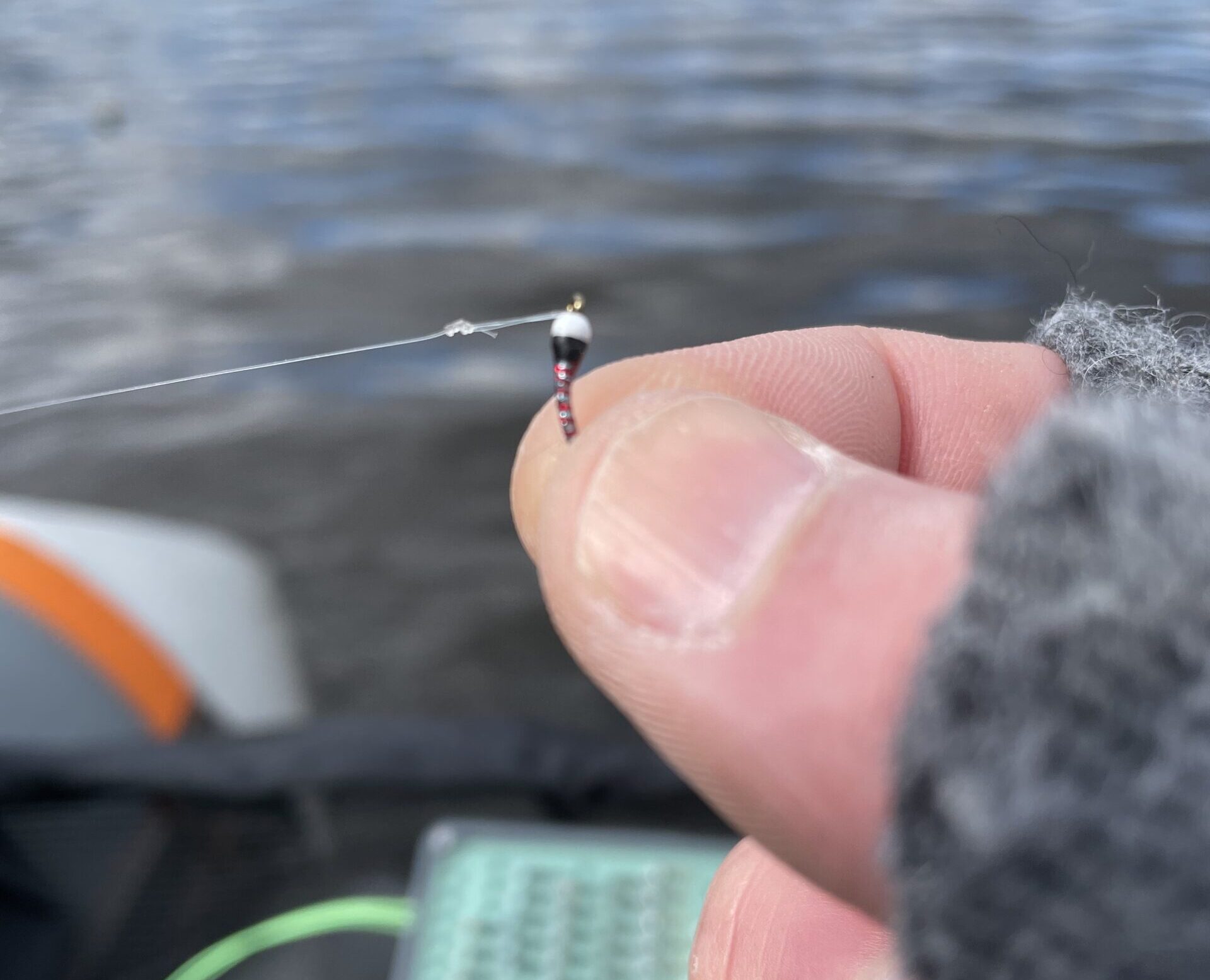 If you’re new to fishing chironomids, don’t be afraid to ask us about our favorite methods for presenting them. My most productive patterns over the last few weeks have been #16 Chromies, #16 Black Sallies, #16 ASB Red Ribbed, #18 Olive Black Ribbed and a #18 Tan Thread Chironomid, but patterns will vary according to the water you fish. Look for Callibaetis mayflies to begin hatching later in the month and for warmwater bass and bluegill fishing to really pick up in May. And by the way, the general lowland lake opener is Saturday, April 24th. Check the WDFW stocking page to see what’s going where. 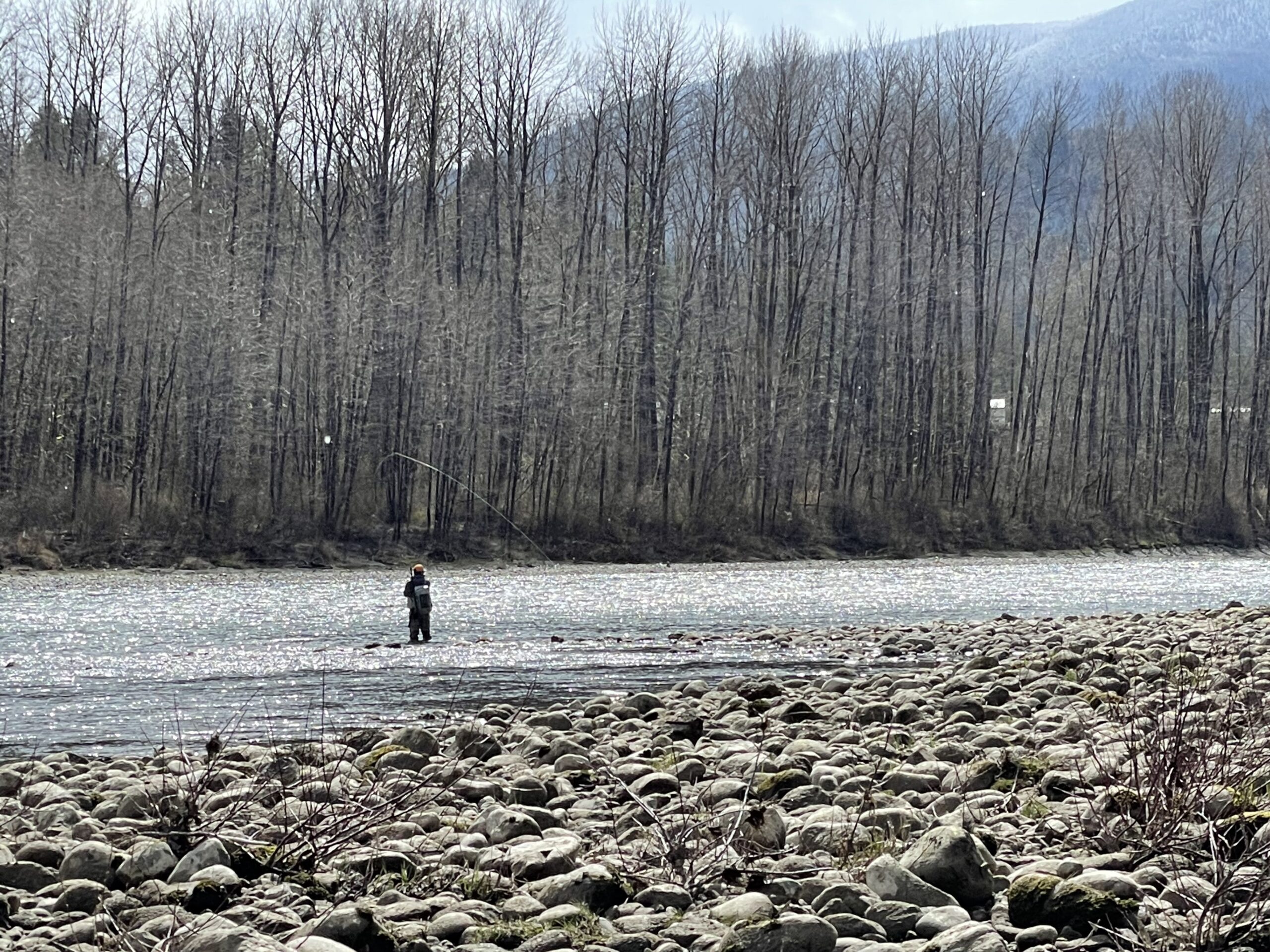 Rivers
Well, the Skagit and Sauk have one more Saturday-Tuesday block of being open before closing on April 13th. With restrictions and lots of early closures on the Olympic Peninsula rivers, it’s been a very busy season out there with a tremendous amount of pressure. Folks have caught some really nice fish this year, but it’s been far from easy and the last several weeks have been pretty stale between lower snow levels, lack of rain and low and clear water conditions. Hopefully, at some point we’ll have a broader variety of open options in the winter that allow anglers to spread out and not be force-funneled into one or two open rivers. We hope you found a fish or two or at least enjoyed the prospects of swinging for one. It’s an incredibly enjoyable way to spend time on a river whether the fish come or not. 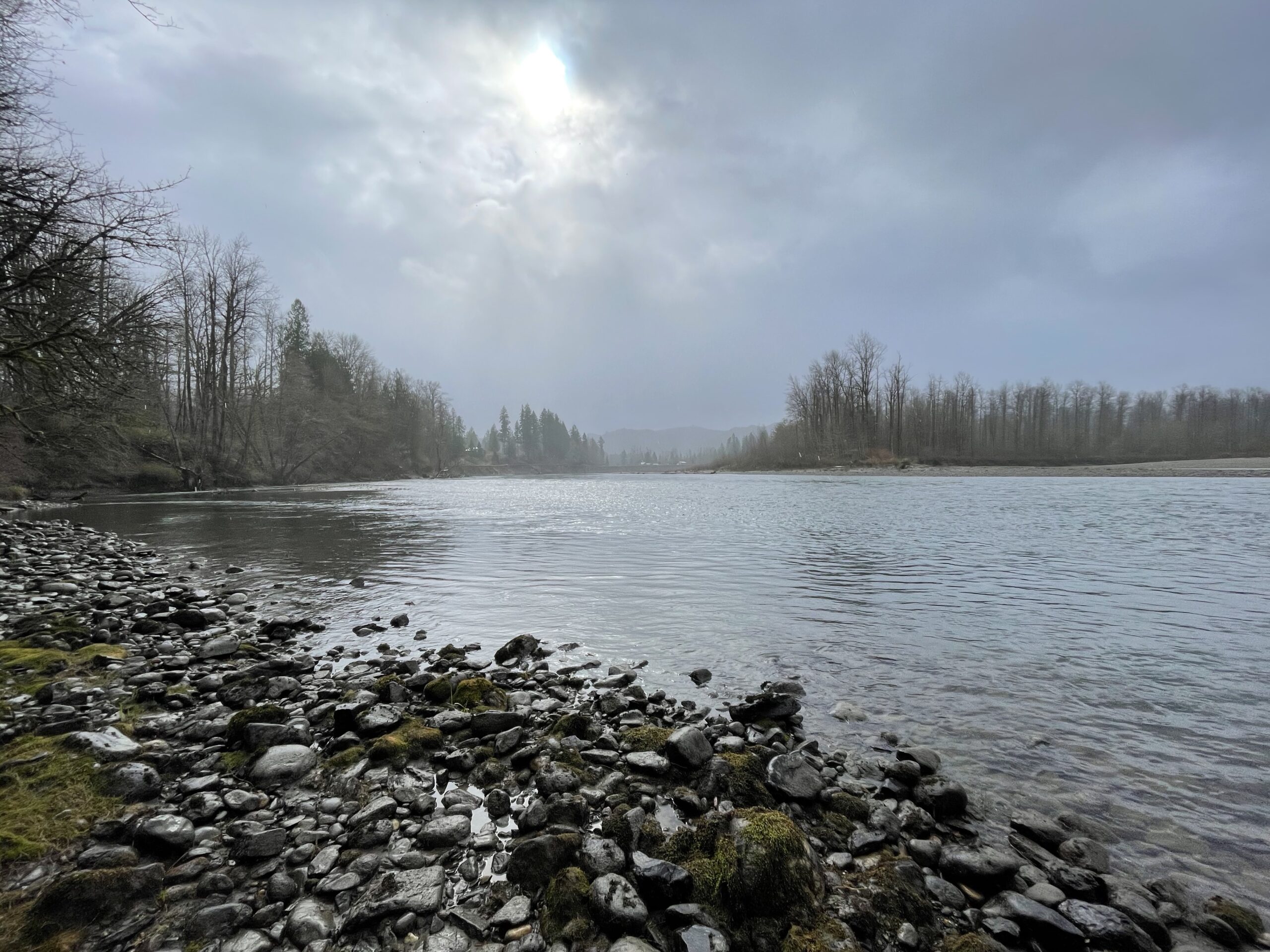 In other news, the Yak remains open and has fished well this spring. There are still a few Skwala stones to be found and the March Brown hatch should get roaring in the afternoons as things heat up. Early to mid May usually sees the first big caddis hatches get underway over there as well, so that’s a good time to plan a pre-runoff trip. In the absence of hatches, Pat’s Rubber Legs, Double Bead Stones, Squirmy Wormies and Jigged Pheasant Tail nymphs under an indicator or contact (Euro) nymphing have been productive. The lower Skagit below Memorial Highway Bridge in Mount Vernon remains open to the mouth including both forks and is in good shape. You really need a boat for this fishery but the cutthroat are active and chum fry are migrating downriver to the salt, so be sure to carry some Chum Babies. 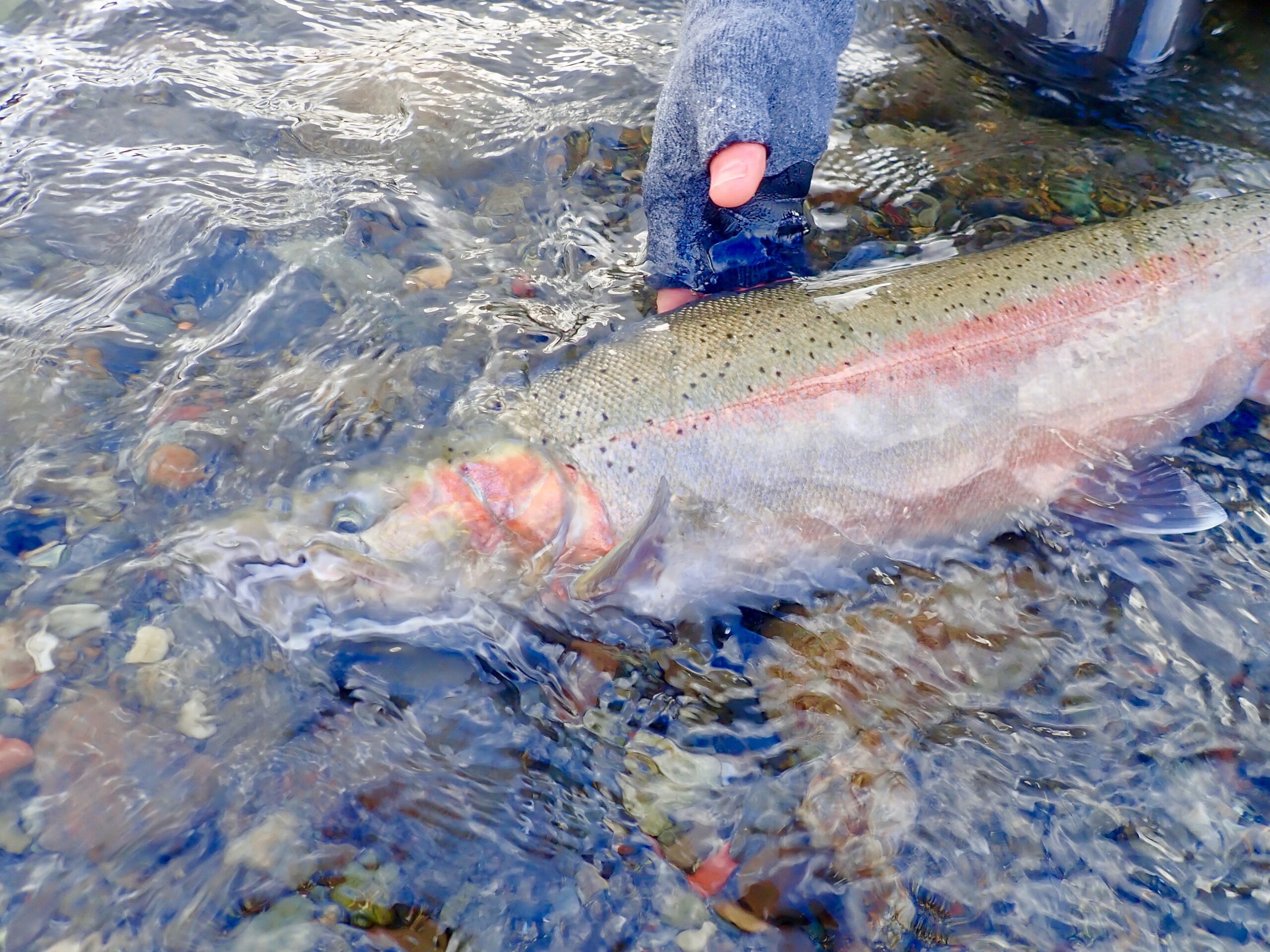 Beaches
We’re beginning to see things happening off the east side of Whidbey. Chum fry are on the move and sea run bull trout on the prowl. We’re not seeing much in the way of north sound sea run cutthroat yet but they ought to be showing up this month off our beaches. Chum Babies, Chumbody Loves Me, #6 Olive White Clousers and the Just Keep Swimming in Fry and Whitebait colors should be in your box. 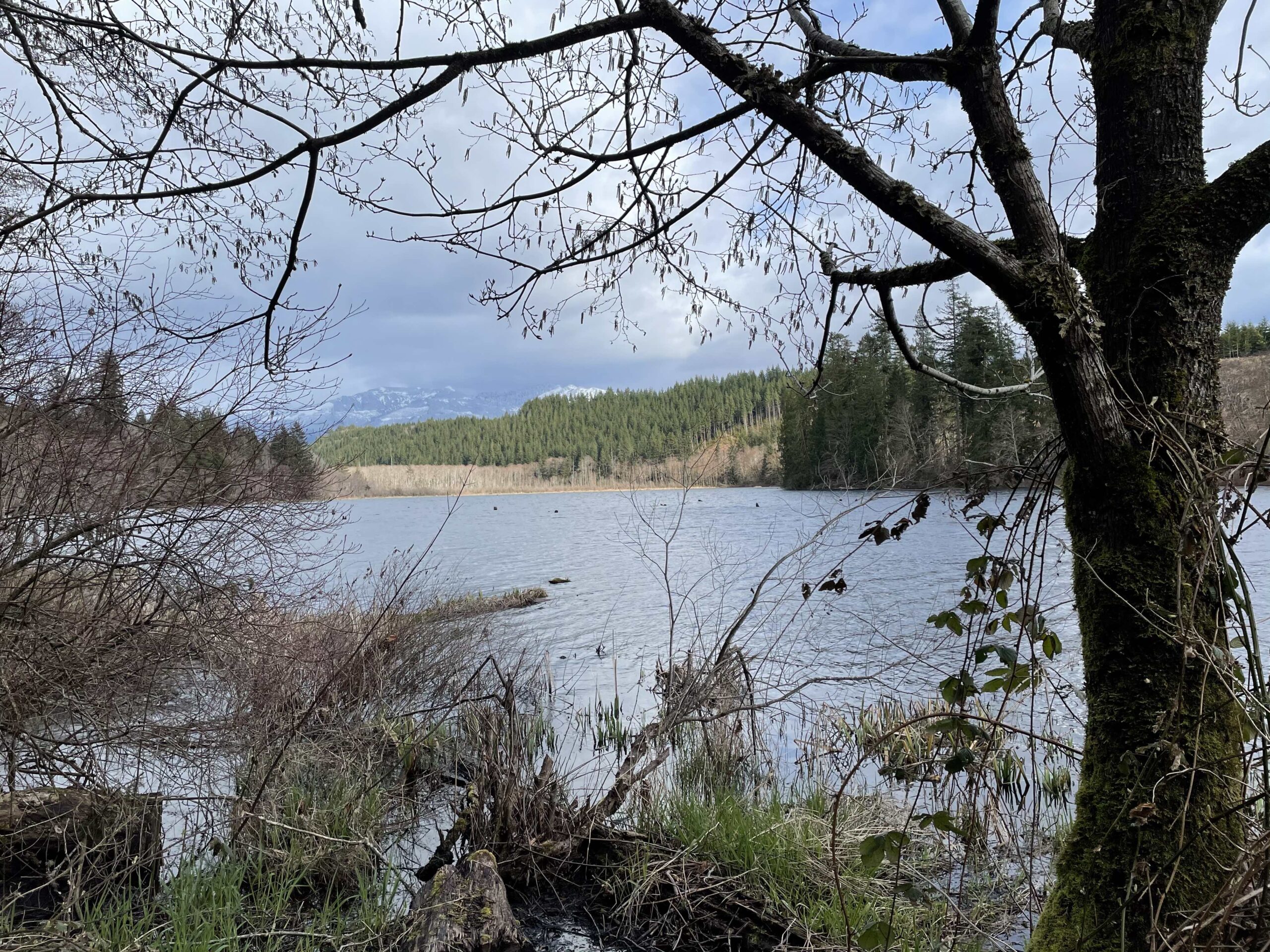