Welcome to hot and smokey! With the post apocalyptic haze of BC’s wild fire smoke blanketing much of the area and temperatures approaching triple digits in parts of Puget Sound, we find ourselves seeking the refugee of a well-shaded mountain stream or early dawn tidal rip now more than ever. The fishing is always a welcome distraction no matter what, but simply finding somewhere to cool off is ranking higher and higher on our list of priorities. Rivers on both sides of the hills are in great shape and fishing well. Mountain lakes are accessible and worthy of exploring. Pinks are somewhere out there, waiting to filter into the Sound and it’s tributaries, though numbers throughout the region are forecast to be down from their 2015 abundance. Regardless of which direction you head, it’s inarguably nice to ease into the water, with or without waders (though mostly without), wash away the palpable stickiness of an oppressive August heat wave and wrangle a few fish. Play them quickly, keep them wet and release them to the coolness of the water where we all long to be. 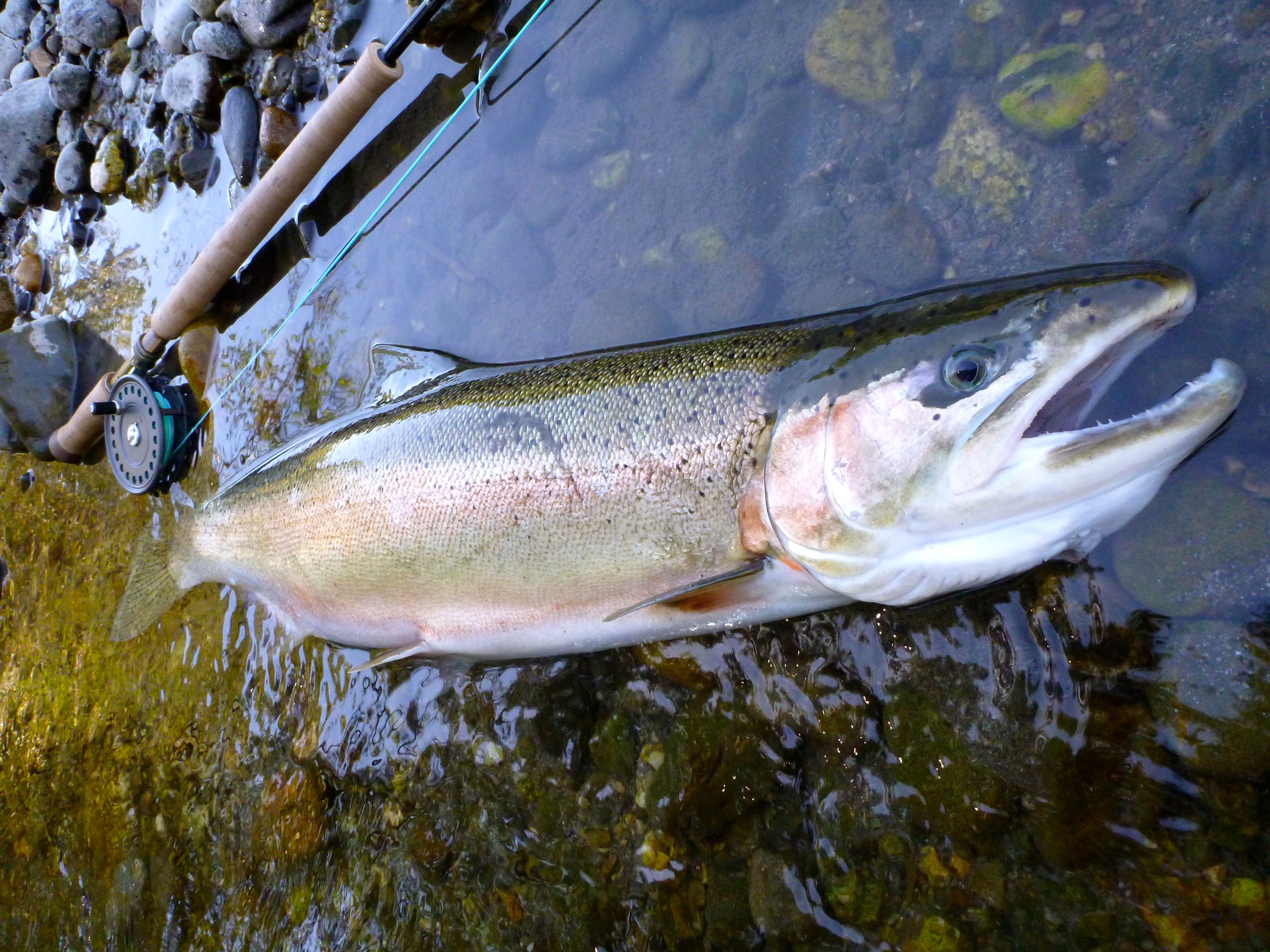 Rivers
Unfortunately some of our primary local heavy hitters are done for the better part of the year with the Skagit and main tributaries and the Stilly now closed to all fishing. The Stilly fished quite well through the end of July and produced a fair number of both wild and hatchery steelhead to the fly. Let’s hope we get a bit more of a season next year. On the bright side, we still have a fair variety of moving water fisheries to enjoy from the Methow to our mountain creeks and some good stuff in between. The Nooksack is still awaiting a good push of pink salmon, but we’re expecting they’ll show up at some point this month. Some better upcoming tides may help bring fish into the river. Visibility is reduced with some glacial melt coloring up the river. Stick to bigger profiled pink flies like Aviators, Hot Shot Comets, Reverse Marabou Spiders and Starlight Leeches and fish shallow as the pinks will often travel very close to shore under these conditions. The Nooksack is currently open up to the FFA Barn in Deming for a 4 pink salmon limit. The Snohomish above highway 9 and Skykomish up to the Lewis Street bridge opens for salmon on August 16th, and then September 1st above the bridge. Typically, smaller pink patterns like the Comet, Pink Finkus and Pink Sparkle Bomb work better in the clearer waters of the Skykomish/Snohomish system. The Skykomish is currently fishing okay for summer steelhead and you’ll potentially find them throughout the river. Smaller traditional patterns like Purple Perils, Freight Trains, Muddlers and the like are appropriate for the current water conditions. 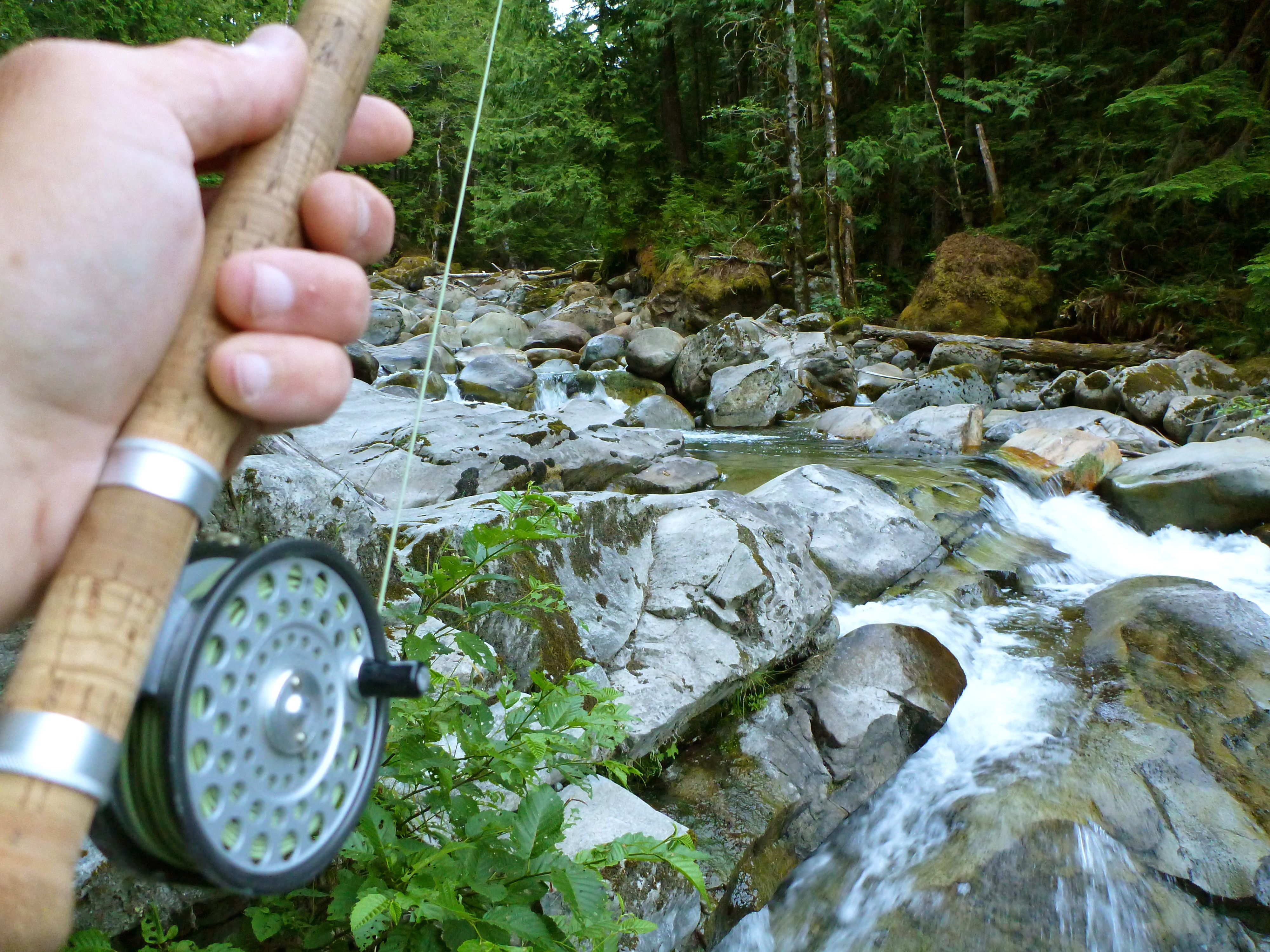 Upper portions of the Nooksack system and open tributaries are fishing well, with near perfect lower water conditions and a variety of dry flies being productive. Bear in mind that the road into Canyon is closed about a mile and a half below the first bridge where you can legally begin fishing, so it’s a bit of a hike to get to the water. Effective flies include smaller Stimulators, Elk Hair Caddis, Royal Humpies, Royal Wulffs and Parachute Ants. East of the mountains, the Methow and open tributaries are fishing well, with some bigger fish looking up. Chubby Chernobyl’s, Amy’s Ants, Sandwich Hoppers with little Copper John or Lightning Bug droppers are always a wonderful combination this time of year, as are Kiwi Muddlers, Sculpzillas and Wounded Sculpins fished on a sink tip or poly leader through some of the deeper runs. This river system can produce some epic cutthroat and cut-bows even in the heat of summer. The upper Skagit above Ross Lake is fishing really well of late and is in perfect shape. Elk Hair Caddis, Parachute Adams, Adams, Para-midges, Griffith’s Gnats, Purple Haze, Parachute Ants and Foam Beetles are taking fish on the surface, with small Beadhead Prince Nymphs, Zebra Midges, Twenty Inchers and Hare’s Ears nymphed through the pockets producing the river’s infamously strong rainbows as well. Bring bug spray and/or bug repellent clothing if you head that way. The notoriously sparrow-sized mosquitos at the north end of Ross Lake are in full force. If you’ve not yet seen the new Simms Bug Stopper hats we carry at the Confluence, these were pretty much made for the upper Skagit and equally bug infested nether regions. 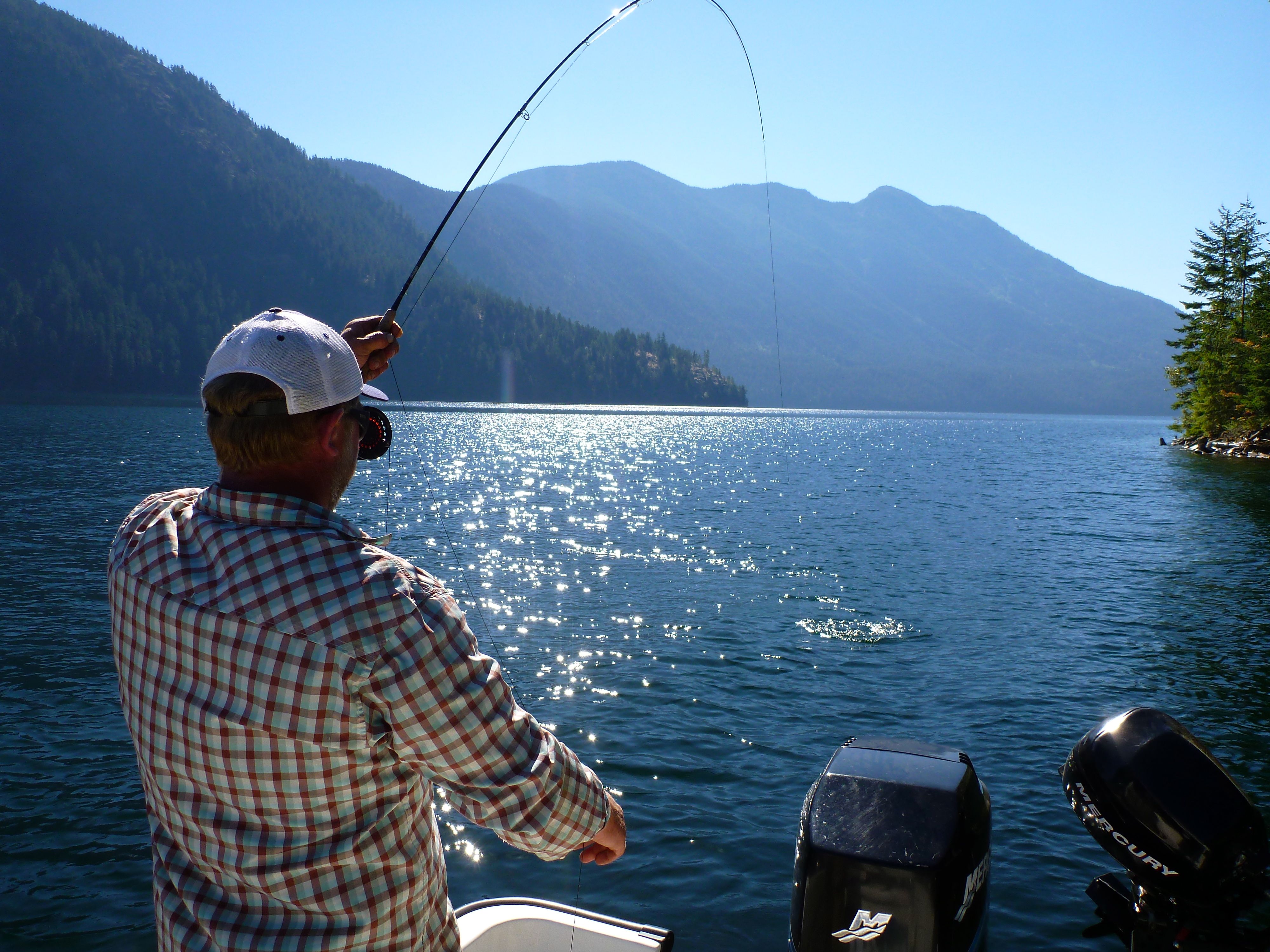 Lakes
August is a great time to don hiking boots and hit the dusty trail to experience the short season of high lakes fishing. Black gnats, Mosquito’s, Parachute Adams, Adams and CDC Midge Emergers are working well when the lake’s surface is dimpled with rise forms. Terrestrials like ants, beetles and even small hoppers often end up bobbing in the surface film of our alpine lakes during the dog days of summer and significantly supplement the trout food chain. Subsurface attracters like Zug Bugs, Soft Hackles and small Woolly Buggers work well too, resembling a staggering variety of possible food sources. Ross Lake is fishing pretty well early and late in the day for some of the biggest wild rainbows our region has to offer. Full sink lines (type 6) are the name of the game on Ross as this steep walled flooded river valley is generally lacking in shallow shoals. I was up there about a week ago for a few days and while we had to work a little harder for our fish, found some really nice trout. You can troll or cast along a rocky shoreline and retrieve flies back. Redside shiners in the 2-3″ length are the predominant food source in the lake and flies that imitate them account for most of the rainbows. Shiners are literally everywhere in the lake and the trick to catching fish seems to be to find areas where the rainbows can corral them into confined spaces, be it a sheer rock wall or submerged trough in the lake bed. Each day we’d see hapless shiners driven out of the water by frenzied slashing rainbows. Olive/white Clousers, Marabou Clousers, Thin Mints and Dude Friendly’s all produced fish. This month’s fly of the month, the Ross Lake Shiner certainly has the magic stuff for up there. 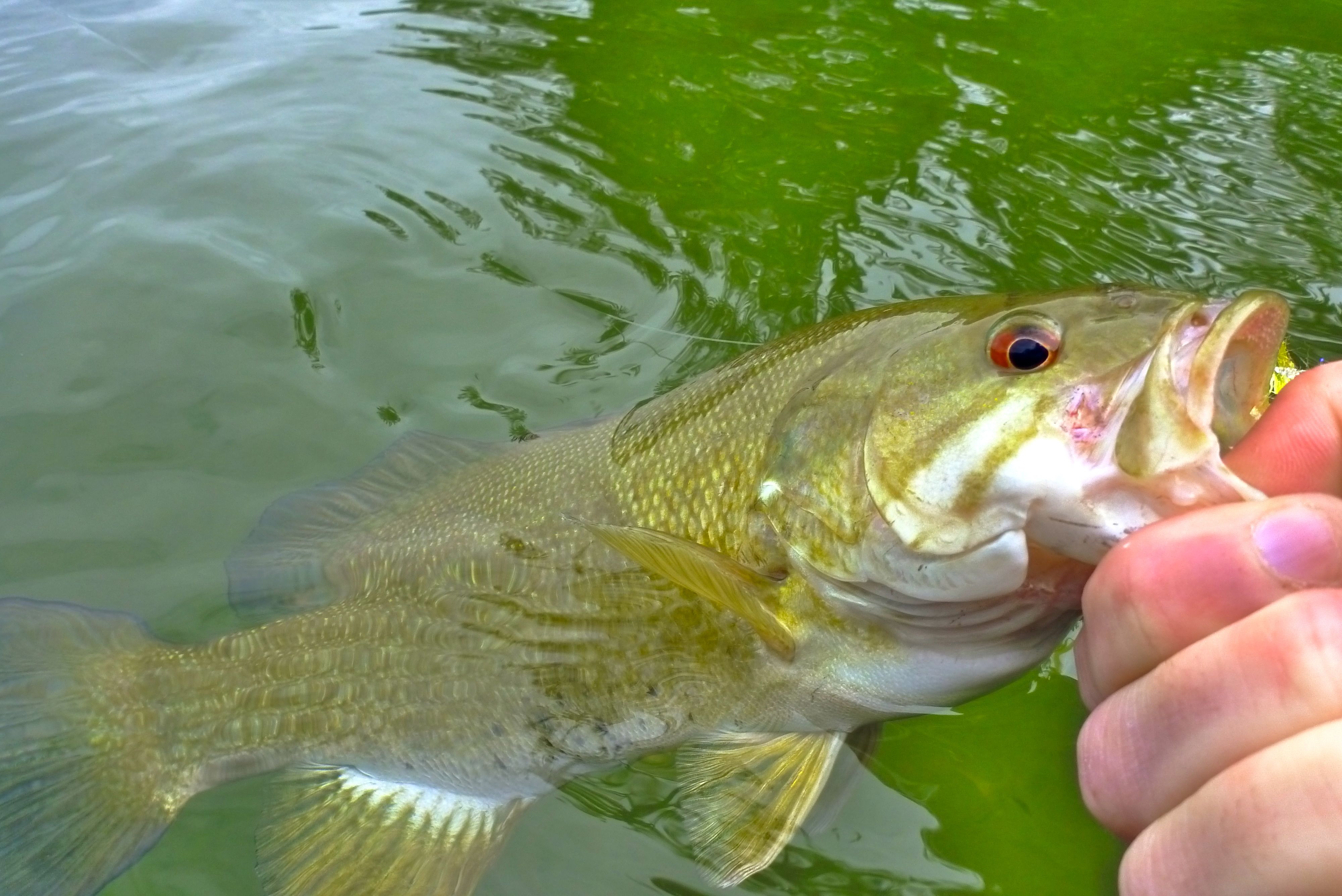 Closer to home, local bass lakes like Fazon, Terrell, McMurry and Clear are kicking out some big bass in the lowlight hours of the day. Now is the time for big topwater presentations like Hair Bugs, Divers, Mouserats and Frog Divers as the sun fades into the horizon. Bring a stout rod and iron resolve. Though the hexagenia hatch has dwindled on Whatcom, big smallmouth prowl the shallows early and late in the day, feasting on crayfish, perch and kokanee. Stick with patterns that imitate these plentiful forage species and you’ll find some willing smallies to put a nice bend in your rod. 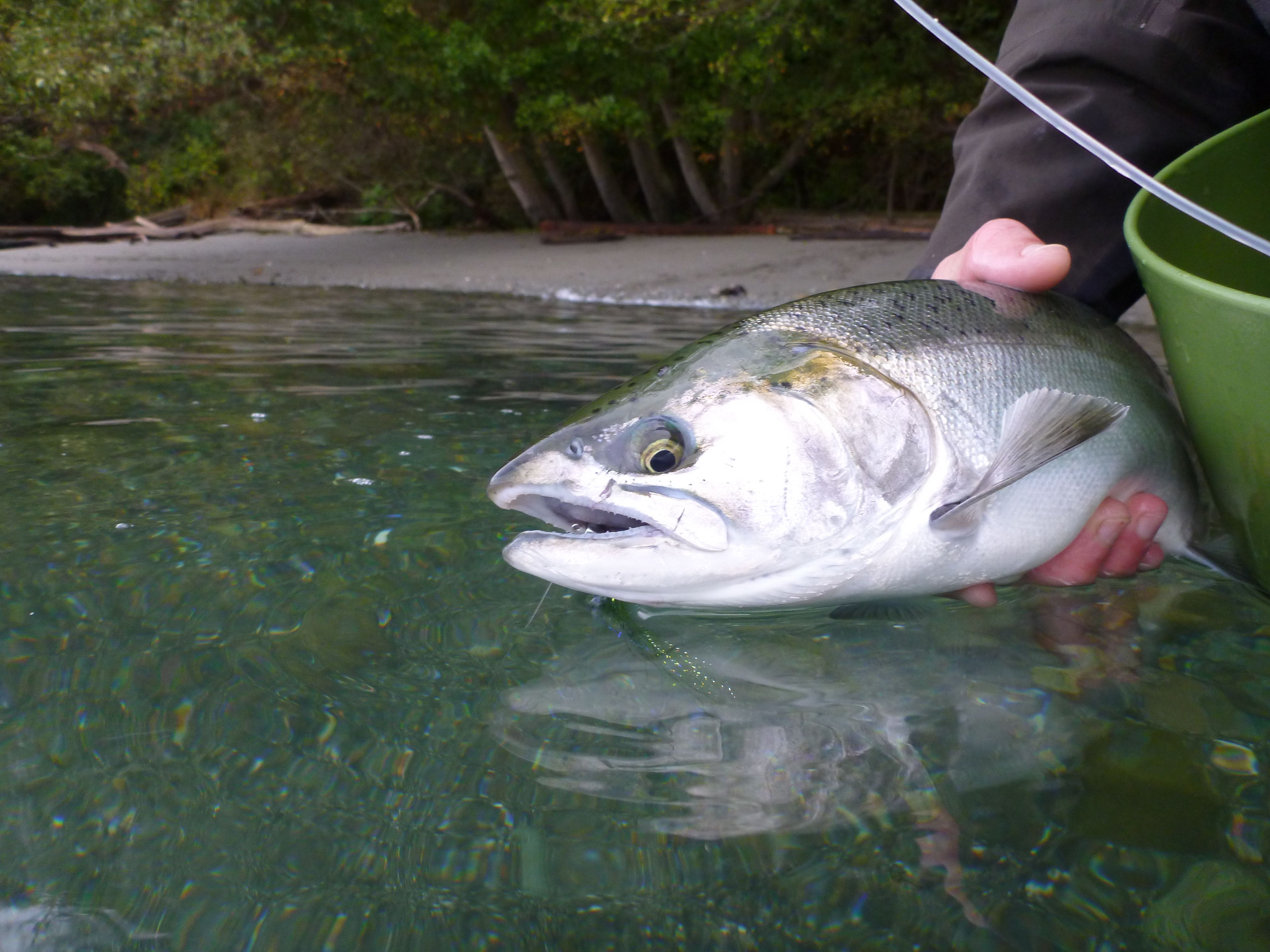 Saltwater
Our long awaited summer beach salmon fishery has finally arrived, though has gotten off to a slow start so far. Folks are finding the odd pink and resident coho around the Sound, but we are looking forward to more consistency in the coming weeks. Marine Area 9, where we find much of our best beach fishing, closed to fishing from boats at the end of July once the chinook catch quota was met. You can still fish from the beach through September 4th, so there’s plenty of time to encounter bigger pods of salmon migrating along the shoreline. Look for tide rips, points of land and rocky beaches along Whidbey’s west side. Generally, south of Partridge Point fish are going to be moving in a southerly direction. With this in mind, you can time your presentation to intercept pods of visibly jumping salmon or look on with anticipation and readiness as rods to the north of you bend and buck under the weight of a sea bright fish. You’ll want a 6 or 7 weight rod, floating and intermediate lines, some 10-12 pound fluorocarbon and don’t leave home without a stripping basket lest you wish to spend your quality time untangling fly line from kelp, barnacled rocks and your lower extremities. Fly wise, a simple selection of Clouser Minnows in pink/white, green/white and green/pink works like a charm. The custom tied Craft Fur Clousers we carry at the shop are more durable than bucktail and swim like the real deal. Pink salmon will take these larger patterns as well, though it’s hard to beat smaller pink/white Marabou Clousers in the 2″ and under range for consistency with pinks. Vary your retrieve between fast and slow. Pinks typically like a slower moving fly than the coho but feel free to mix it up. Check your WDFW fishing regulations prior to heading out along with any emergency rule updates. Salmon seasons in the North Sound are a bit different this year to protect weak Skagit and Stilly pink and coho returns. Elsewhere in the Sound and Hood Canal, regulations are more on par with a “normal” year. 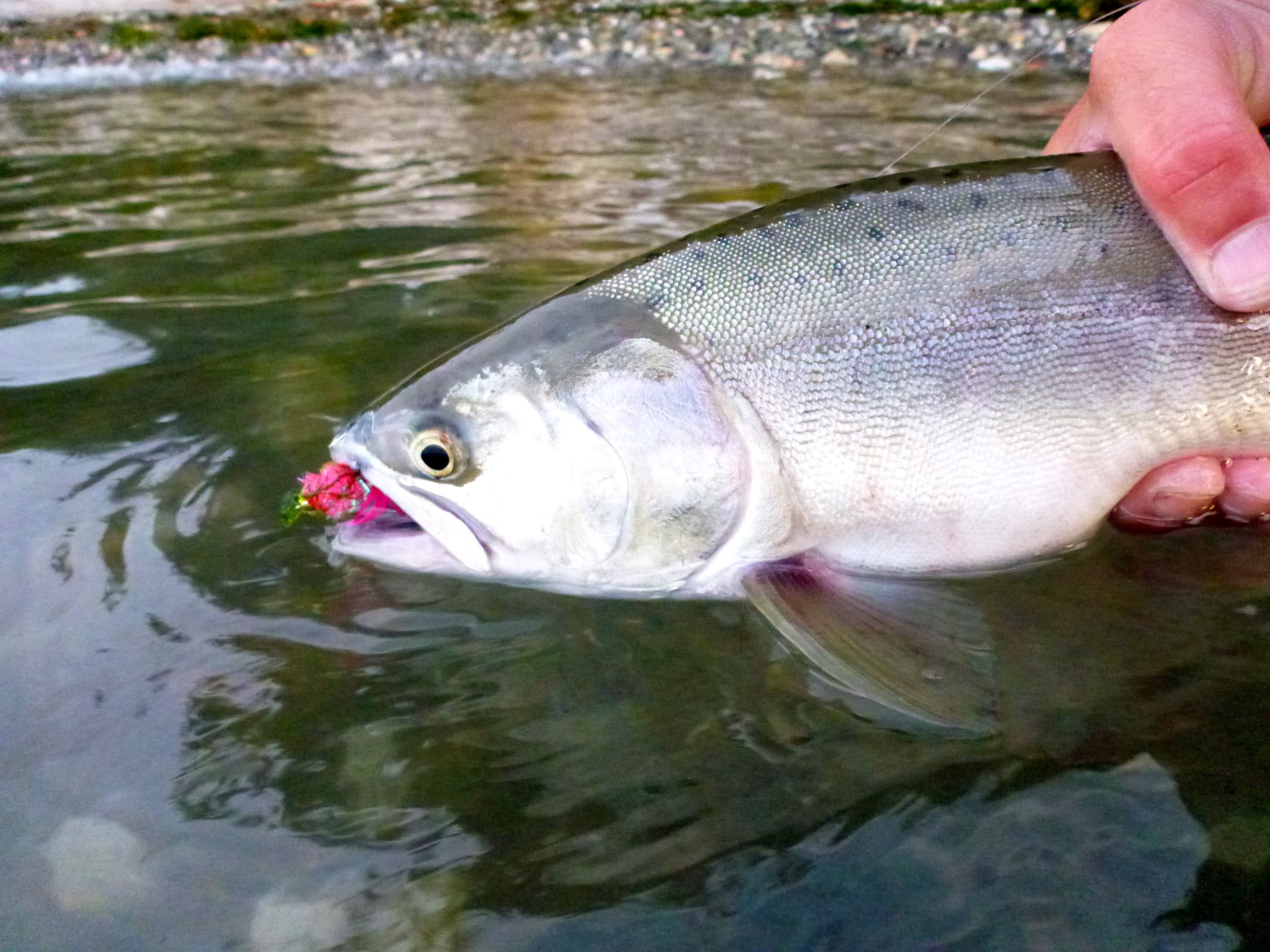