By now most of us have a pretty good sense of what it’s like to be a corn dog under a gas station heat lamp. Days upon days of sizzle, the intermittent red glow of a wildfire sun beating down on you as much of the west continues to burn. Sound apocalyptic? Yep, it sure feels that way. If you’re not chasing bass or carp or sunnies these days, finding cool water has been the name of the game. We are blessed to have notably cooler water fishing options in our neck of the woods west of the Cascades than throughout much of the country. Prominent summer fisheries like Silver Creek in Idaho are closed due to heat, and many others in western states are under voluntary or mandatory hoot owl restrictions, where you’ll need to be off the water by noon. Imagine how we feel when the mercury tops 90+ degrees and the cheap Fred Meyer box fan is no longer cutting it. That is the world of salmonids when the water reaches the upper 60’s and they don’t have air conditioning. Of course, neither do most of us in Western Washington either. 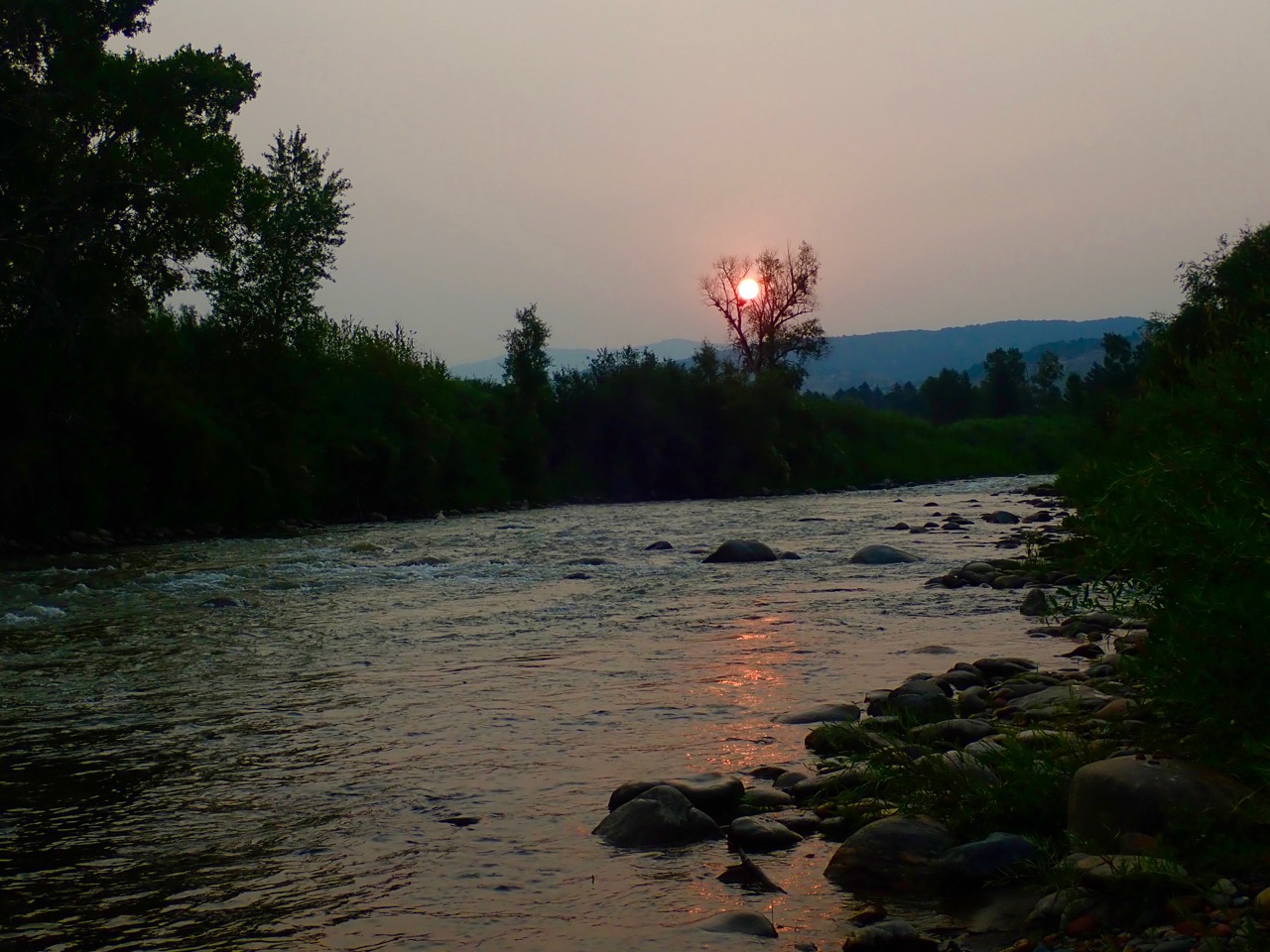 I just got back from a wonderful family trip to Colorado and of course squeezed a fair bit of fishing in along the way, from the tumbling Eagle River to the meandering Fraser and some icy alpine brook trout creeks in between. A biblical rain fell the night we arrived and many of the bigger river systems were muddy for the better part of the week, but it was a welcome sight to see buckets of water squeezed out of the clouds for several hours. We had more precipitation in an hour than we’ve likely seen here in Washington since late May.

My favorite part of the whole experience was getting to help my 11-year-old nephew Gus learn to fly fish. We fished dries, we fished indicator rigs and explored what easily became his favorite means of tricking trout, tight line nymphing, probably as a result of seeing the good number of big browns and rainbows I managed to pick up with my euro nymphing rig. He’s a quick study and has that same spark and passion for being on the water as many of the folks that frequent our fly shop. Give him a few years and he’ll be a force to be reckoned with. 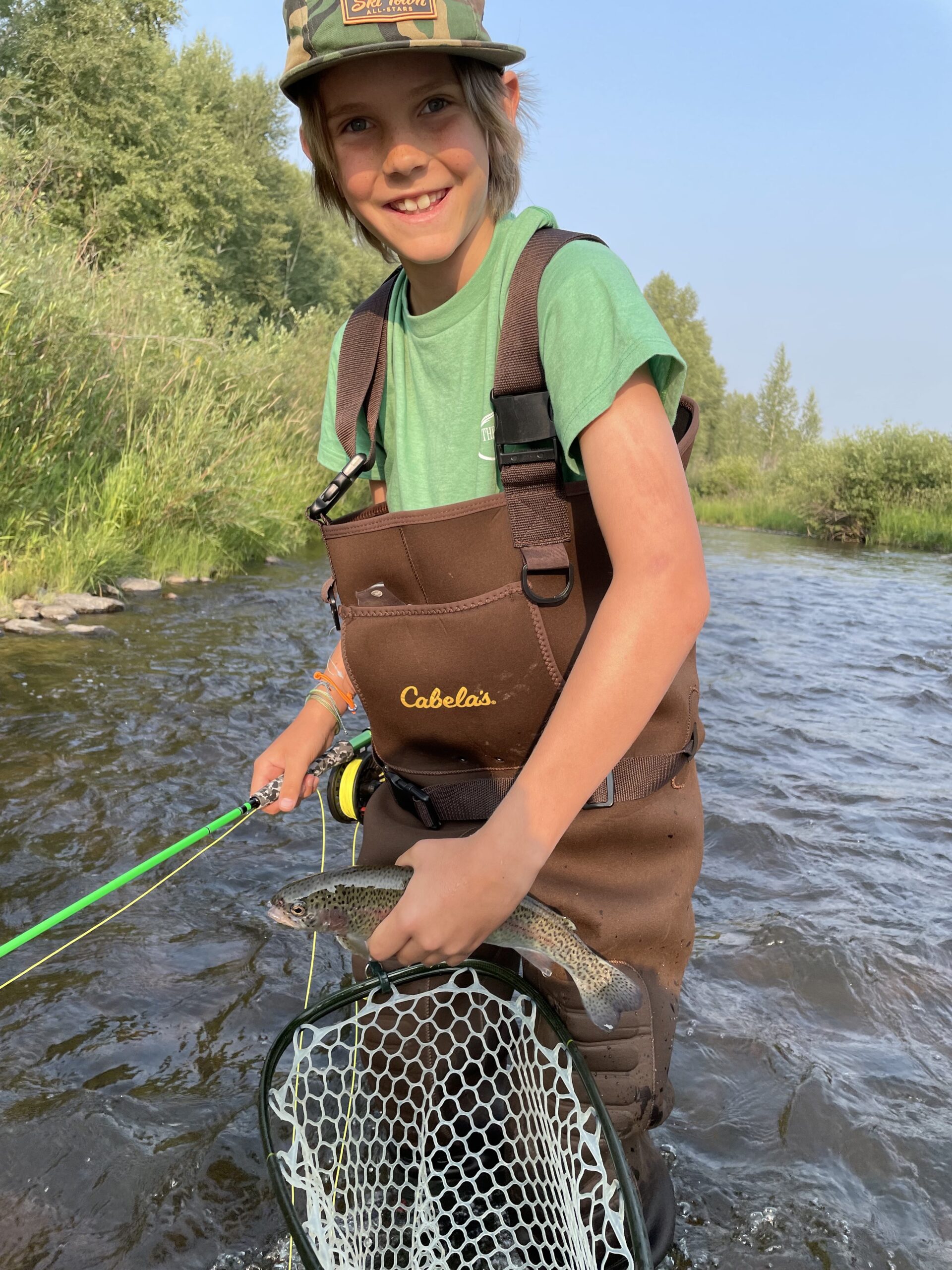 Back on the home front, it’s definitely getting to be go-time for pink salmon. Most of the fish are still migrating through the Sound, so the beach is the place to be, but come September, the Skagit should be absolutely teeming with them. Come October, it’ll start to smell really bad up there but those big nutrient loads to our relatively sterile rivers are key to keeping the whole process going. If you’re not salmon-centric, it’s a fine time to explore those thin blue lines in the mountains or climb your way into an alpine lake. And if you don’t have the time or inclination to travel too far from town, the bass and panfish lakes are still fishing as well as ever.

In shop news, our last two Spey Wednesdays for the summer are completely full with several folks on the waitlist. If you missed out, we’re going to try and put together some weekend days this fall to get a few more sessions in. Otherwise, we always offer private one on one instruction and we can get you up and belting laser beam casts across the river that way. Just drop us a line and we’ll get you scheduled.

﻿Product availability continues to improve every week and we are very well stocked on everything except boats and float tubes at the moment. If you’ve been waiting for that unfindable wader or boot size for several months, there’s a good chance we have it in stock as we just got a massive backorder in from Simms and are literally wall-to-wall waders and boots. We got a big order of the Linekurv stripping baskets in a few weeks back too if you’re beach bound for pinks and coho and need one.

In the meantime, stay cool, stay fishing and enjoy the last couple of months of summer. There’s a lot to do out there! 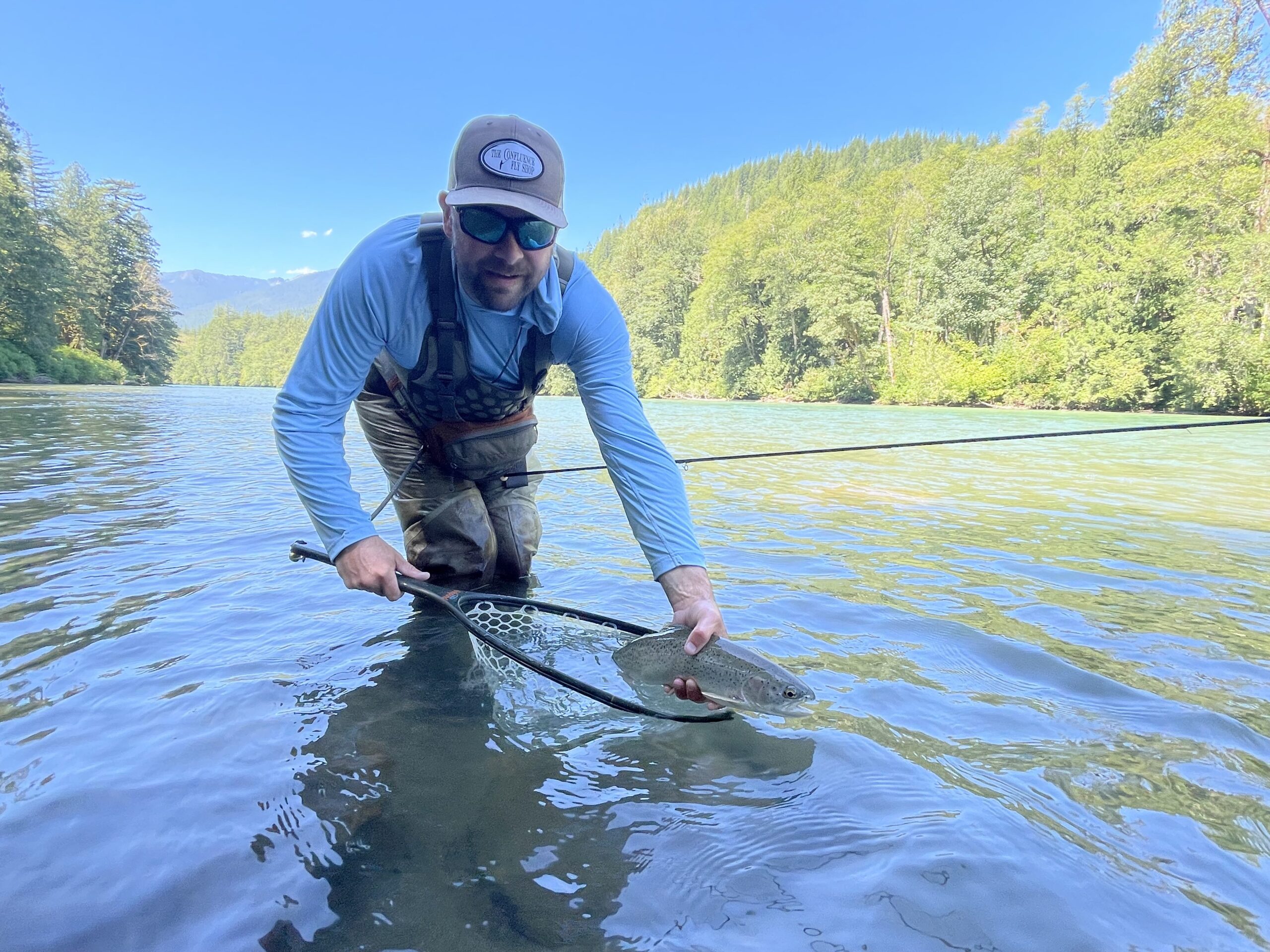 Rivers
It’s still prime time to hit the rivers. Now that Hwy. 20 is back open, the Methow is an option once again. Keep in mind that it’s very low and you’ll want to restrict your fishing hours to the early mornings when the water is cool. You’re best to stop fishing when the water gets above 65 degrees for the trout’s sake. It’s hopper time over on the old Yakima and with water levels still bumped for irrigation, it’s a fine option for an August float whenever you can break away.

We’ve been splitting time between the Skagit system and small mountain creeks for the last month and will likely continue with that program. The Skagit fishes well for big bull trout using streamer tactics and you’ll find some decent rainbows above the Sauk confluence too. The Dali Llama, Olive Sculpzilla and White Zonker are our favorite bull streamers. Trout will eat these too, though smaller offerings like Rolled Muddlers and Slumpbusters tend to out-perform the big ones. High water temperature is not usually an issue in the Skagit. As of a week ago I still found myself comfortably numb below the waistline after half an hour of standing in the river. 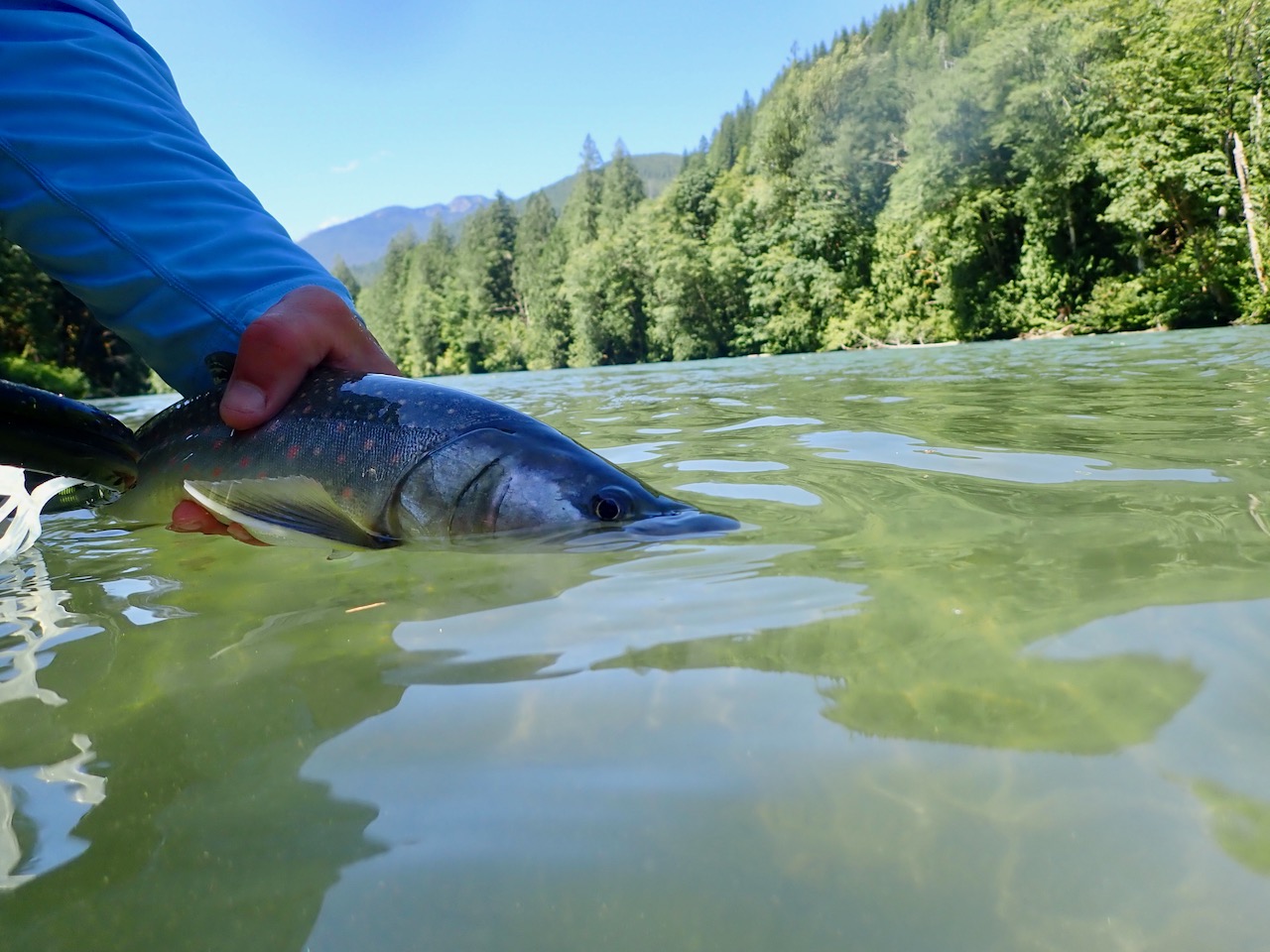 For the small streams, standard attractor dries work well like Para Adams, Purple Haze, Royal Wulffs and Humpies. Some of the newer patterns like Rio’s Foam Run Caddis, the Moodah Poodah and Grumpy Frumpy have been outstanding as well. With liberal amounts of foam built into the fly, they tend to ride high and are virtually unsinkable in the higher gradient and turbulent flows where you’ll often find trout congregating at this time of year.

The Skagit up to Gilligan Creek opens Saturday, August 14th for pink salmon retention, though it’s still relatively dirty below the Sauk. The rest of the river up to Marblemount will open September 1st for pinks. The Nooksack mainstem is open for pink salmon now, though water clarity remains an issue. Generally speaking, the clearer the water, the smaller the fly you want for pink salmon. Sparse pink Comets work great above Rockport on the Skagit, whereas you may want something with a bit more profile like our Just Another Humpy Fly in the lower reaches of the river. You’ll find instructions to tie this fly in our August Fly of the Month video. We also have a good supply already tied up at the shop. You can fish light sink tips for pinks on a 6 wt. rod or bigger. We actually mostly fish floating and intermediate lines in an effort to keep the fly just above the fish and avoid any incidental snagging. Remember, humpies tend to occupy the slower, shallower margins of the river. Being smaller and less powerful than other salmon species, they prefer to take the path of least resistance so fish accordingly. As with all salmon, the more you can locate them in areas where they appear to be resting or holding, the better biters they will generally be. Actively moving fish are typically less aggressive and less apt to bite. 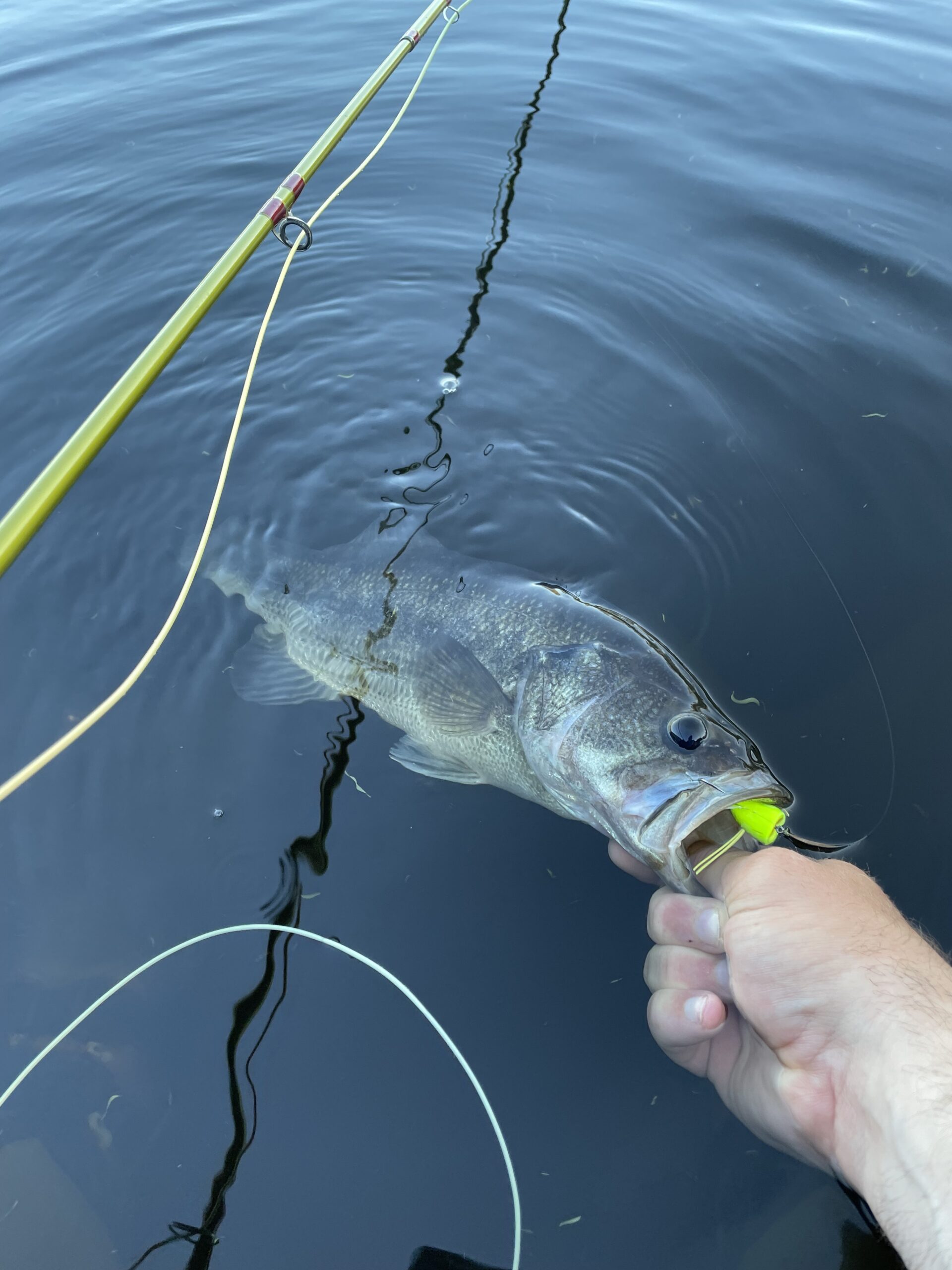 Lakes
Outside of clamoring up to a secluded basin in the mountains, most of our lowland trout lakes are way too hot to be fishing right now. Terrell, Wiser, Fazon, Samish and Whatcom on the other hand continue to fish well for bass and panfish. Mornings and evenings are usually more productive than mid-day and you can pretty much stick to topwater presentations if you want to for largemouth and panfish. The smallmouth in Whatcom and Samish will come up for a popper at night too, but we tend to find more fish crawling crayfish patterns along the bottom or stripping a baitfish pattern on a sink tip or full sink line in deeper water. 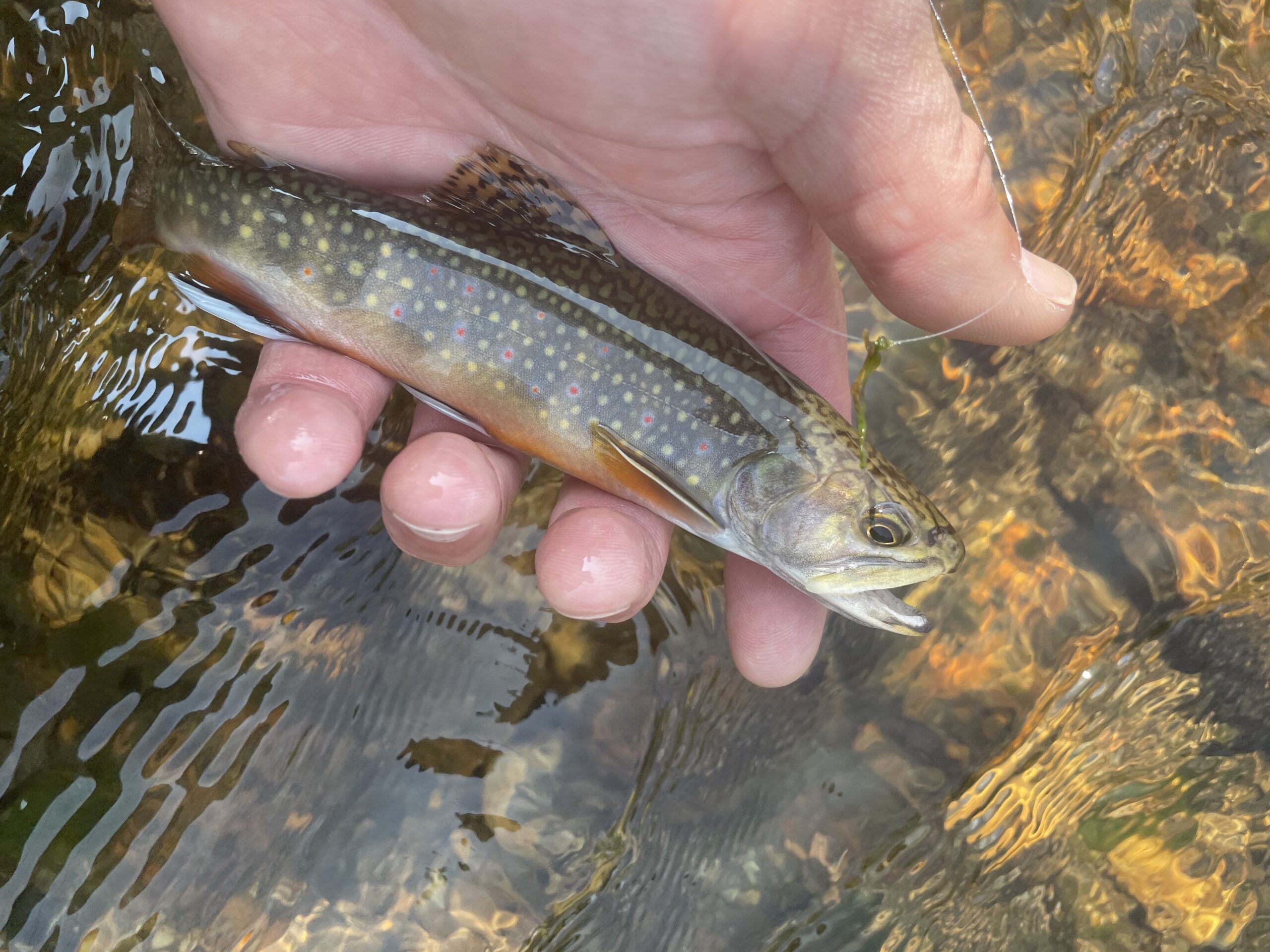 If you hit the alpine lakes for trout, Mosquitoes, small Para Adams, Black Elk Hair Caddis, Para Ants, Foam Beetles, Zug Bugs and Hare’s Ears will produce well. In a couple of months, many of these gems will be frozen and dusted with snow, so now’s the time to get after it. 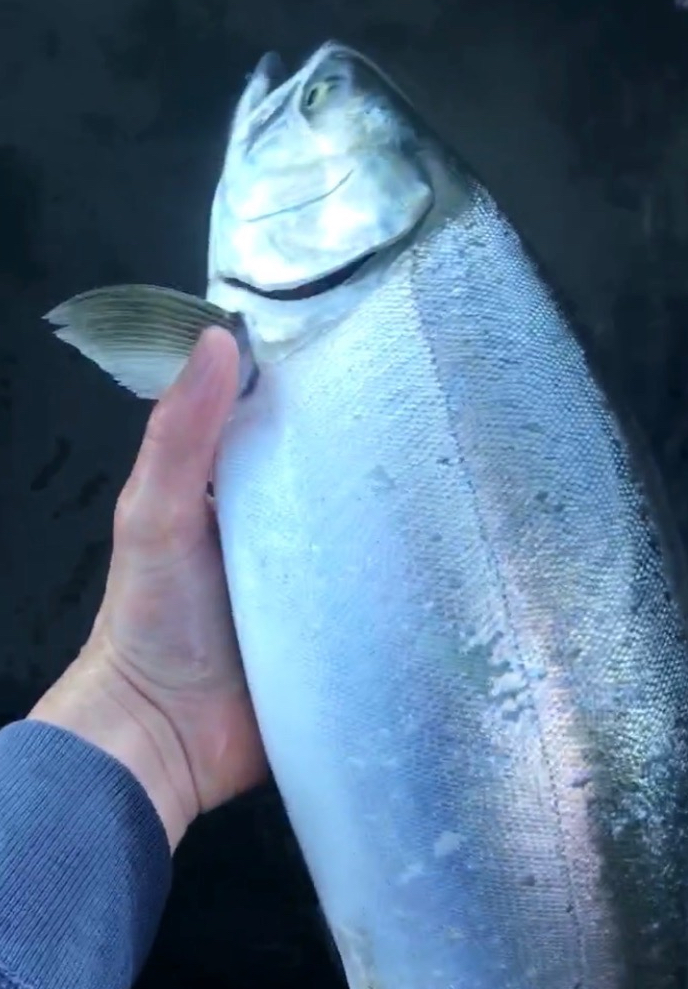 Beaches
The west side of Whidbey is pretty thick with pinks right now, with fish showing off key beaches like Fort Casey and Bush Point fairly regularly. Small pink or pink/chartreuse Clousers are the way to go on a floating or intermediate line depending on the water depth. There’ve been some fish coming around through Deception Pass as well and even along the east side of the island in spots. It’s mostly a pink salmon show right now but folks have been getting into some 2-4 lb. resident coho around the island as well. They’ll take the Clousers too, but have some Imitators, Psychedelic Herring, Shock and Awes and Pinheads with you as well.