For the first time in the last few summers, the dog days of August feel a tad less dogged. Despite last week’s heat wave, many of our rivers on both sides of the mountains remain comfortably cool with decent flows thanks to an abundant snow pack. From the sunshine, the prime water conditions over many of our fisheries and the plenitude and diversity of things to fish for, life is pretty darn good. We’re enjoying the breadth of our summer fisheries from local mountain creeks to saltwater cutthroat to pond bass and jumbo trout on the Methow. Did I mention the giant hexagenia mayflies are hatching on Lake Whatcom too? We’ve all waited a thoroughly long time for summer this year and it appears to be sticking around for the foreseeable future. We hope each and every one of you gets an opportunity to savor the season and get some quality fly fishing in.

In shop news, things are moving along pretty steadily these days. We’re about as well stocked as we’ve ever been and the supply chain with most of our vendors is flowing at a fairly close to normal pace. We still have quite a few different models of Outcast float tubes in inventory, so if you’re shore-bound and looking for a convenient way to get out on your favorite lake please drop us a line. We had a great spey night in July with an awesome turnout and eager learners. We’re going to forgo doing an August event. Between vacations, classes and other commitments we just can’t squeeze it in but are working on putting together a fall spey demo workshop to make up for it. We still offer one on one spey and single hand casting instruction so be sure to hit us up if you’re in the market to learn or simply improve upon your skills. 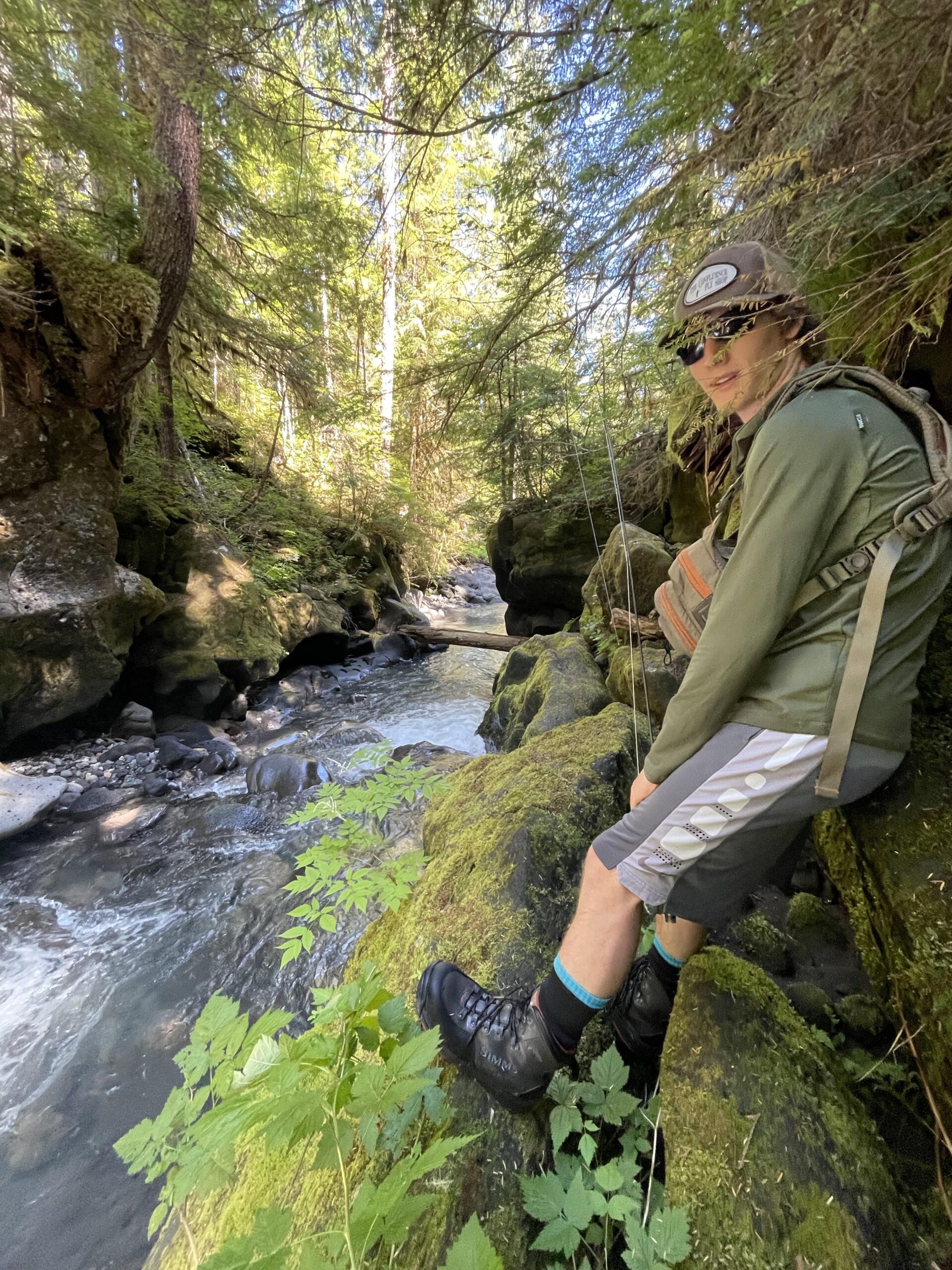 Last, but certainly not least, we’re bidding a fond farewell to Addison Cross who has worked the last two summers at the Confluence. Addison is heading off to college at Montana Tech in Butte, Montana to study something that is well beyond the scope of my understanding. He’s a smart kid and we wish him well. I heard there might a few trout in the rivers out that way so we’re sure he’ll be just fine. August 10th will be his last day so stop in and wish him the best if you’re so inclined.

Now let’s get down to the nitty gritty and talk about what’s happening out on the water! 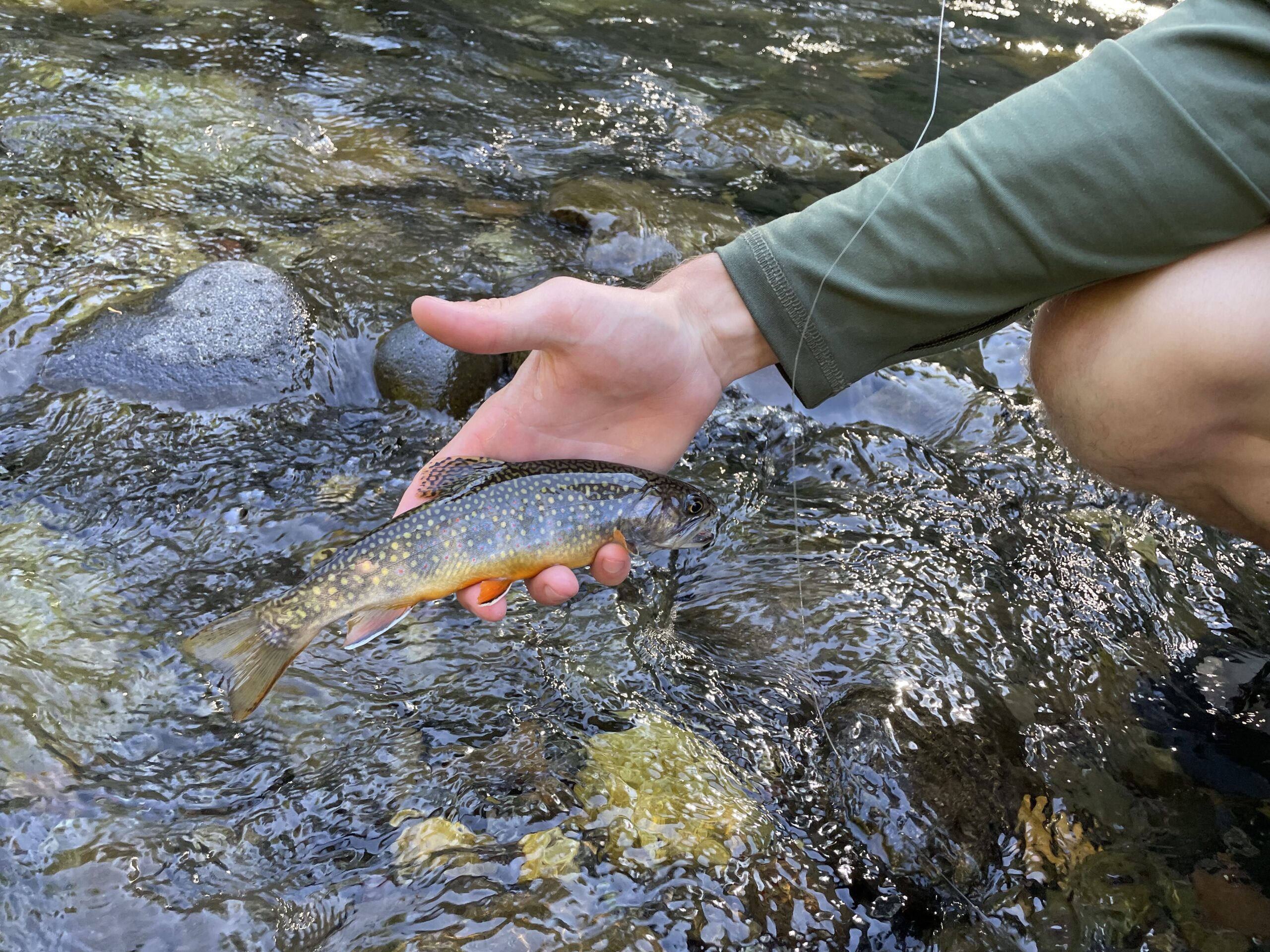 Rivers
After higher and challenging flows on a lot of streams last month, creeks and rivers alike are settling into typical summer levels that culminate in being more easily wadeable and offering some great fishing. As for the creeks draining the western Cascades, we fish a lot of dry flies this time of year. Nymphs certainly work quite well too, but let’s be honest, how many months out of the season do we really get to experience exceptional dry fly fishing? Our creek fish are typically not terribly picky when it comes to flies, but there are a few important considerations to note about flies to have in your box.

First, it is paramount that you be able to see your fly floating nicely along a rippled current so that you can react accordingly when a hungry trout scarfs it down. A lot of our streams are relatively high gradient and feature boulder strewn pocket water. A high floating, highly visible fly is critical in this water. Foam Run Caddis, Stimulators, Royal Wulffs, Grumpy Frumpies, Moodah Poodahs, Para Wulffs and Humpies all fit this bill nicely. Now when you fish the long slicks and the flat water, the currents are generally slower and trout don’t absolutely have to make the same knee jerk decision to eat your fly. More subtle, lower riding flies like the Parachute Adams, Purple Haze, Hi Vis Foam Beetle and Para Ant get a lot more action in this water type than their jacked up cousins. If you opt to run a dropper nymph off your dry fly, you’ll often tempt that next class of fish to take the subsurface pattern when it’s reluctant to move to the surface. Just be sure you’re fishing a dry that’s buoyant enough to support a small weighted nymph. The Moodah Poodah is one of my favorites as it’s not huge but still floats exceptionally well with some weight under it. A big Chubby Chernobyl may work wonders on the Yakima or Methow as an indicator dry, but they’re a bit oversized for the average creek fish. 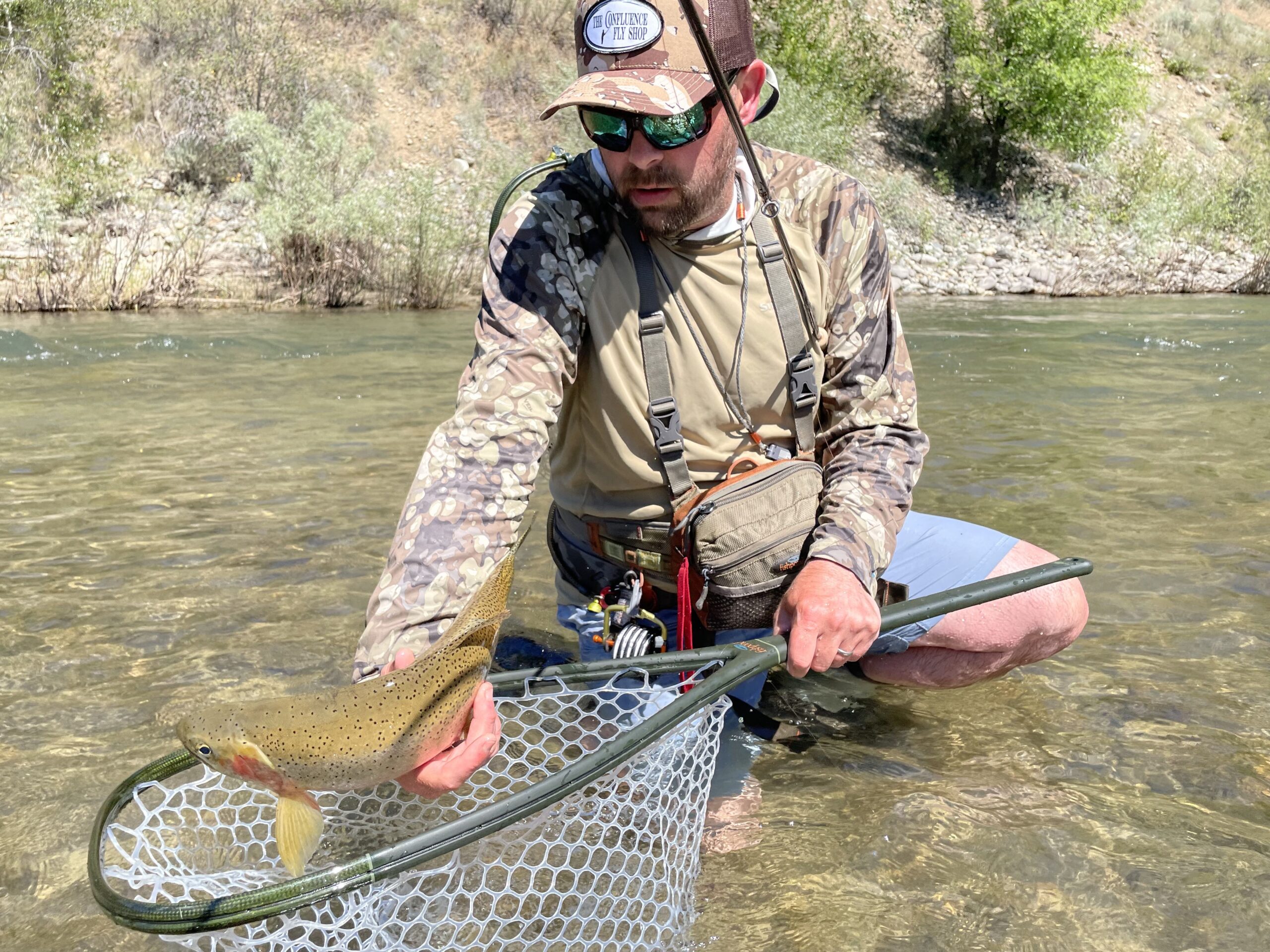 The Methow continues to fish well, though things slow down in heat of the afternoon this time of year. Mornings and late evening are generally best. As for hatches, you’ll continue to find lots of caddis and yellow sallies with a smattering of golden stoneflies about. PMD mayflies are coming off sporadically as well. If you’d rather fish streamers, by all means, those big cutthroat love Sculpzillas, Dali Llamas, big Muddlers and most anything with a sculpin profile. Keep a stream thermometer on you over there. If water temps start to exceed around 65 degrees it’s best to move on until the water cools down. Think of it as a good excuse to seek out a cooler higher elevation tributary or explore someplace new.

The Skagit has been running a little higher than average lately but is clear above the Sauk confluence. Summer bull trout fishing can be quite good as these char migrate upriver towards their spawning tributaries in the fall. Big white Dali’s, Flash Fry and Zonkers fished on an active retrieve with a sink tip are the ticket. Next month, look for good numbers of coho and plentiful sea run cutthroat to begin making their way upstream. Addison’s been tying Reverse Spiders for the shop the last few weeks so we should have some in the top colors on hand. 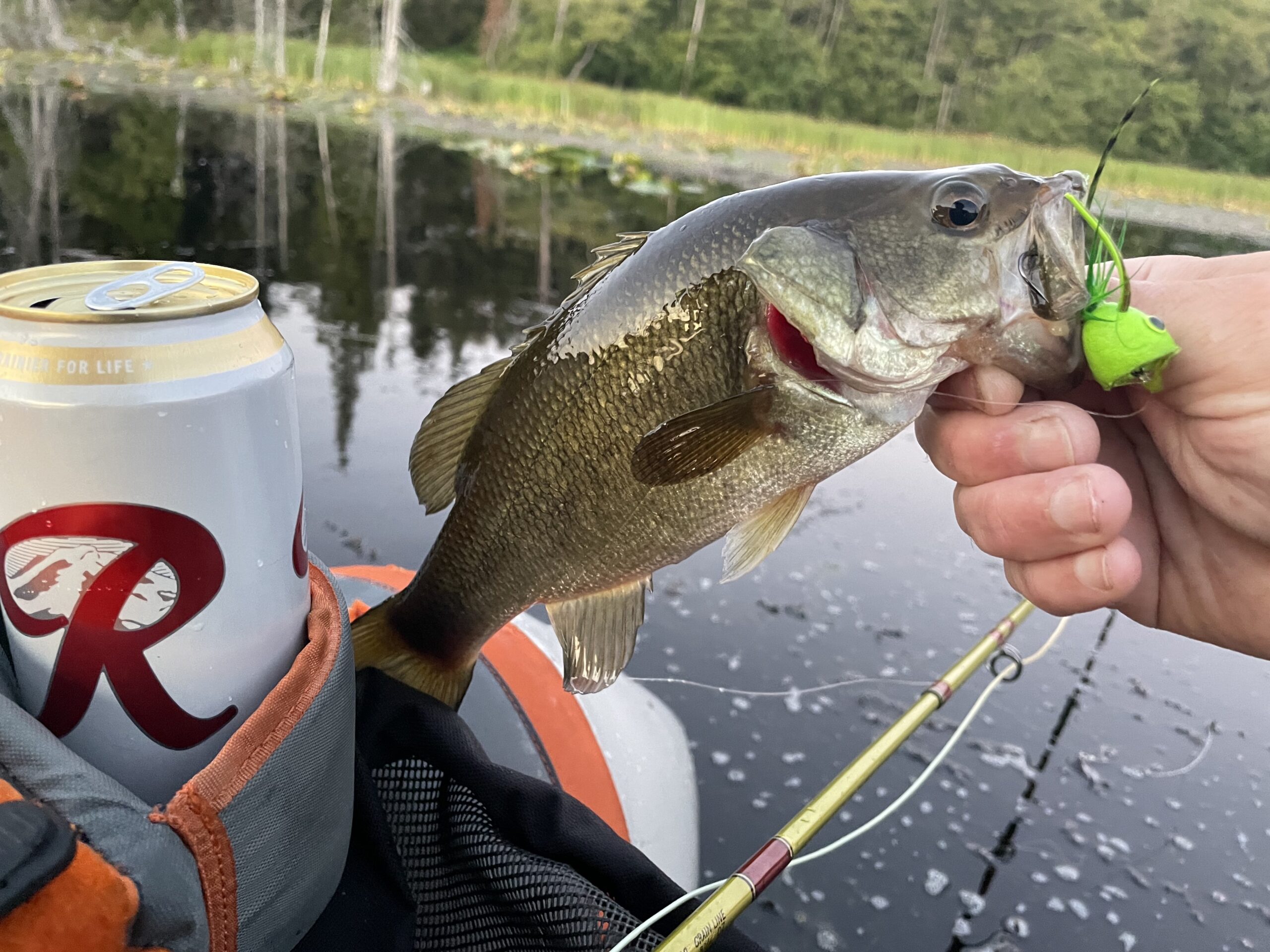 Lakes
Most of our lowland trout lakes are far too warm at the moment to be responsibly fishing for trout. Pass, Squalicum, Lone and others are definitely better left alone until the water cools in the fall. On the bright side, many alpine lakes are finally snow free and accessible with lots of hungry trout that only get a handful of months out of the year to chow down and grow. Effective high country flies include the Adams in a variety of sizes, Mosquitoes, Para Ants, dark bodied Elk Hair Caddis, Griffiths Gnats and Royal Wulffs. Subsurface, general attractors like Zug Bugs, Hare’s Ear Soft Hackles, Prince Nymphs, Half Backs and small Buggers work well when the trout aren’t looking up. 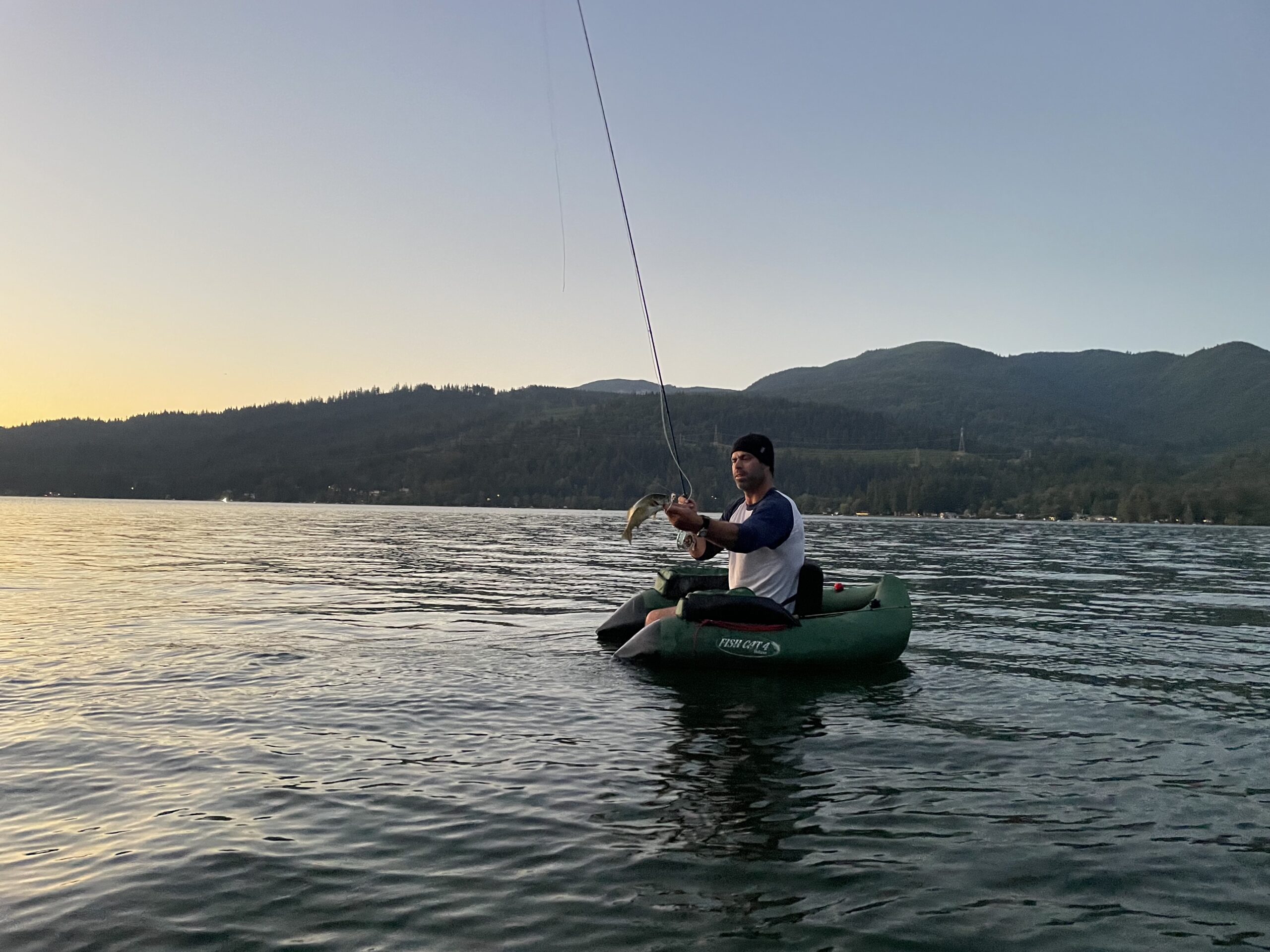 If you don’t want to drive much or aren’t up for a hike, local lakes are fishing very well for a variety of bass and panfish during the heat of the summer. The Hexagenia or Big Yellow Mayfly hatch is going steady on Lake Whatcom. These big bugs hatch to some degree nightly around dusk and often draw smallmouth into the shallows where fly fishing can be very effective. The hatch usually tapers often in late August. Be sure to bring your Clousers, Murdich Minnows, Zoo Cougars and even a few big noisy poppers with you when you go, as some nights the bass are keyed in on bugs and others not so much. Largemouth bass and panfish fishing has also been fantastic the last several weeks outside of the heat of the day. Fish have been most aggressive in the dawn hours and again when the evening shadows set in over the lake. Big frog poppers, mouse patterns and divers work great fished fairly aggressively and loudly around weed beds, pads and structure. 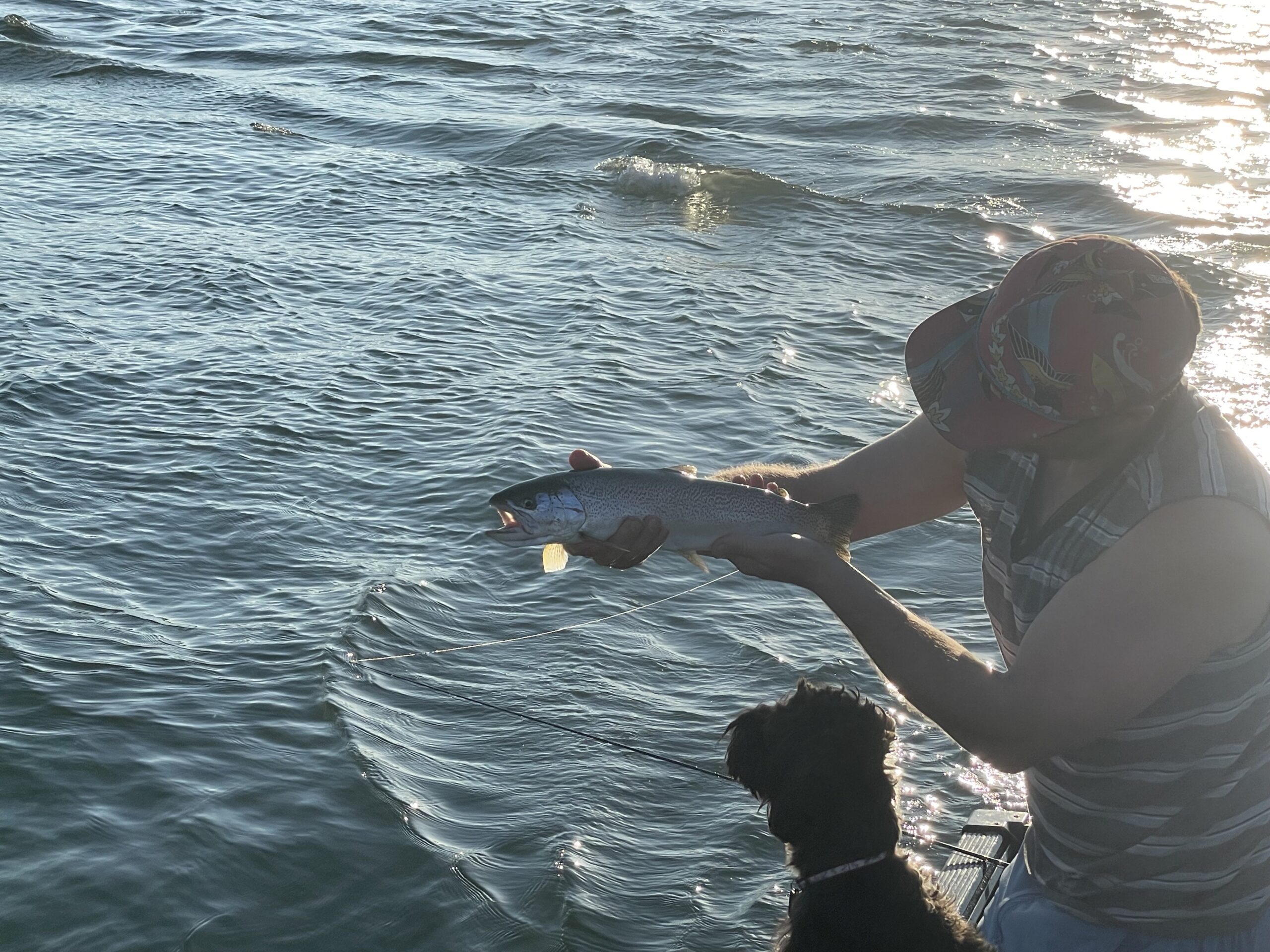 Beaches
We’re creeping up on coho season as we get further into August. There have been good numbers of Puget Sound resident coho around the south end of Whidbey lately, but the migratory ocean coho typically start pouring into the Sound a bit later in the month and all through September. Pink/white and chartreuse/white stinger Clousers are your bread and butter flies, along with a handful of more imitative big herring patterns. In the meantime, cutthroat fishing along the eastside of Whidbey and Camano Islands has been pretty steady with smaller Clousers and Pinheads. The Skagit is putting some color in the bay, particularly on the outgoing tide, so high visibility colors like chartreuse or flashy patterns like Rio’s Flashdrive have been particularly effective at those times. 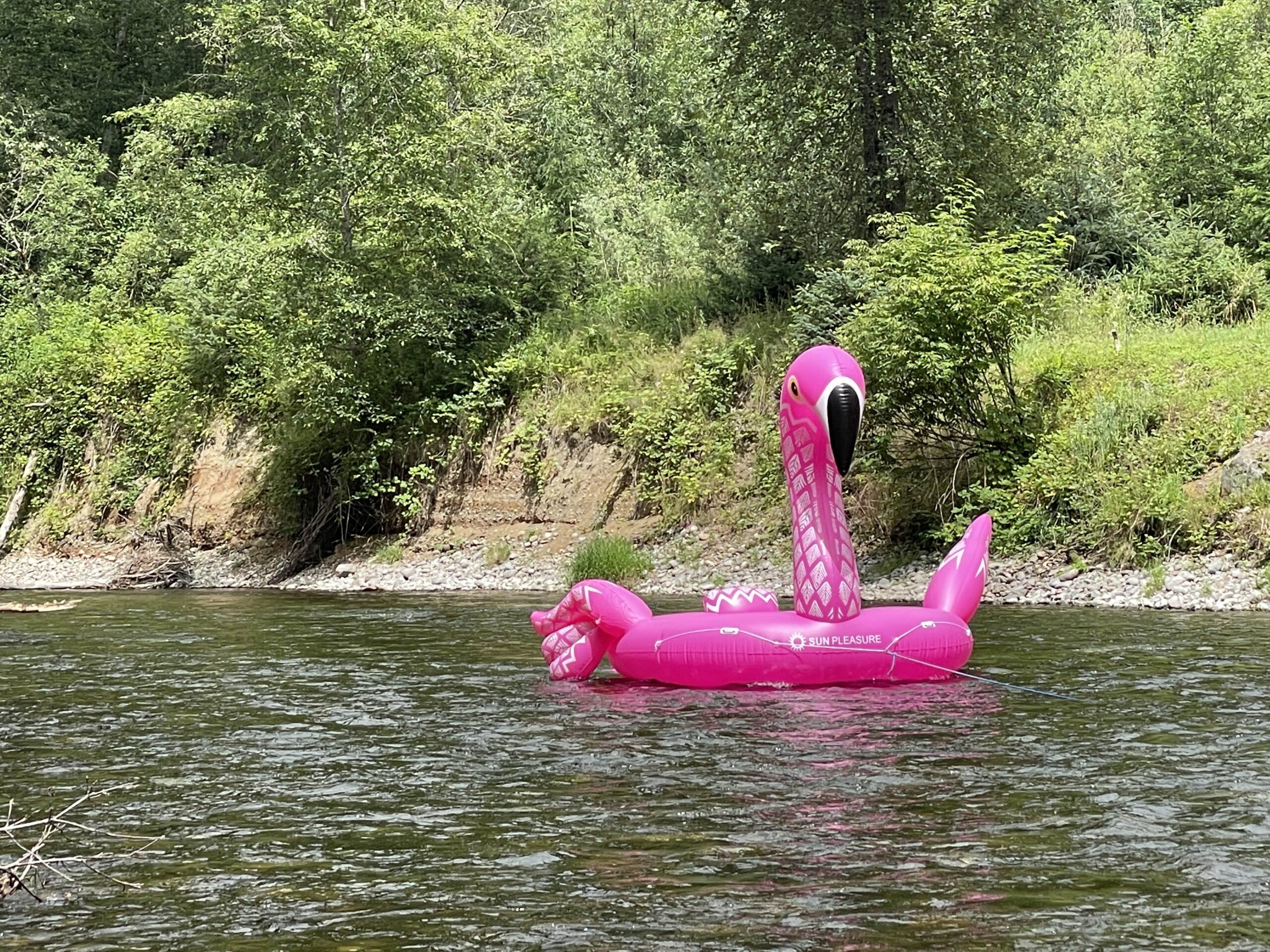