An Atmospheric River Runs Through It was the riveting story of a bunch of fisher people who wanted nothing more than to go fishing in November 2021 and instead found themselves pumping water out of their basements, sandbagging their riverfront property and nervously driving through downtown torrents of water from Iowa Street to Squalicum Parkway. What a mess! Our thoughts go out to everyone who lost property or struggled through the onslaught of successive floods. November was pretty slow around these parts. Between limited fishing options and large swaths of the county cut off from easy travel folks seemed pretty well stuck at home. Things are looking up in December with snow in the mountains, rivers dropping into shape and a few year round local lakes putting out some decent trout. Let’s hope the weather cooperates for a stretch. At least we’ll round the annual bend in a few days and start earning a little daylight back.

I was fortunate enough to dodge gray skies, rain and lowland snow last week for 8 days in mostly sunny Belize chasing bonefish, tarpon and the elusive permit. I’ve never fished for permit before and was pretty well hell bent on catching one on the fly or at least sufficiently losing my mind in the process. Day one threw four legitimate shots my way, one of which resulted in multiple follows on a Strong Arm Merkin Crab from an interested permit, only to snub the fly at the boat and carry on about its anxious route along the turtle grass flats. Day two I had one shot after hours of drifting channel edges and deep flats around San Pedro. As so often happens in flats fishing game, the day turned from listlessly scanning the horizon and fighting off an eternity of boredom to a sudden flurry of action as a small school of permit revealed their subtle black fin tips cutting a series of wakes within casting range. My first cast was short, my second cast was close enough and a permit peeled off from the group to rail my shrimp pattern and race across the flat. 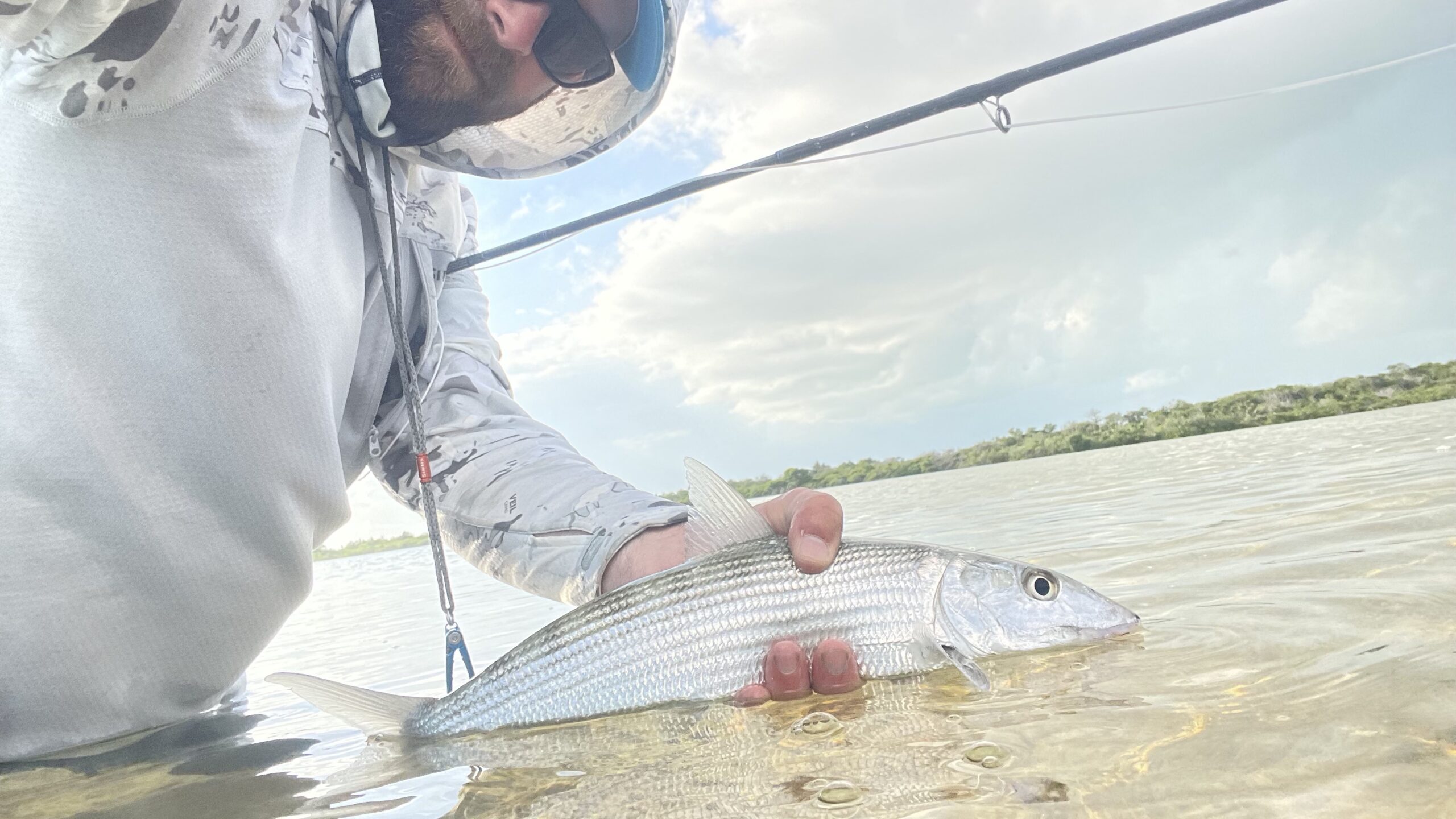 My initial impressions of permit fishing draw a lot of parallels to steelheading in the Northwest. It entails much hunting, requires a laser focus and iron resolve and much of the time you walk away empty handed. It’s not for everyone, but permit fishing embodies the magnetism of the ultimate quest and for anybody that likes to set a lofty goal and relentlessly pursue it until you either achieve it or completely break yourself along the way, it’s pretty hard to beat. I love swinging flies for steelhead in our local rivers, but wholeheartedly admit that the allure of chasing permit in shorts and shades under 85 degree sunny skies might have a leg up on winter fishing in wool gloves, icy guides and 6 layers of clothing. I can’t wait to go back. The bonefish fishing was excellent, the friends around camp unbeatable and the excitement of catching the myriad of mysterious fish species lurking around the mangroves was pretty special. If you’ve never fished tropical saltwater, make it a priority to get out there at some point. You’ll be glad you did.

Things are certainly picking up around the shop with the holidays fast approaching. With supply chain issues still a challenge, it’s a good year not to wait until the last minute for that fly fishing present you just have to get for that special someone in your life. We’re still pretty well set for inventory but some things are harder to come by than others. We’ve got some good sale stuff as well so be sure to check that out further along in the newsletter. Have a safe and happy holiday everyone and thank you all for another busy year. 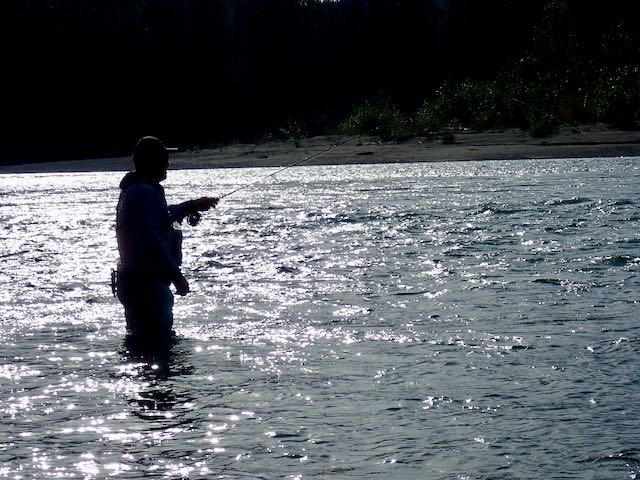 Rivers
The river report might be a little skimpy this month seeing as how they’ve pretty well been running off the charts during much of the recent past. It’s time to starting looking for early winter steelhead both close to home and over on the coast. It’s not expected to be a great return again this winter. Steelhead are where you find them though and in my book, it only takes one to make the season. 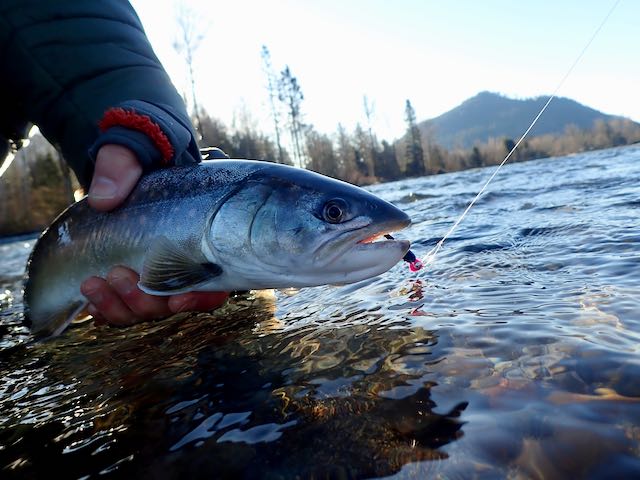 Bull trout are out and about in our North Sound rivers and can often be found hanging around old spawning chum. Whitefish are congregating in deeper pools and can be a fun diversion from holiday shopping or going stir crazy at home. Lots of flies work, from marabou streamers to bunny leeches, but remember, pretty much everything in the river eats an egg this time of year, so egg sucking leeches or single egg patterns are always a good bet. There are a number of river closures on the Olympic Peninsula again this year, so be sure to bone up on the emergency rules before making a trip. No word yet on a Skagit spring catch and release opener for 2022. We generally don’t find out until the latter part of January. Stay warm, stay positive and stay safe out there. After the recent flooding, expect lots of changes and new hazards on our local rivers. 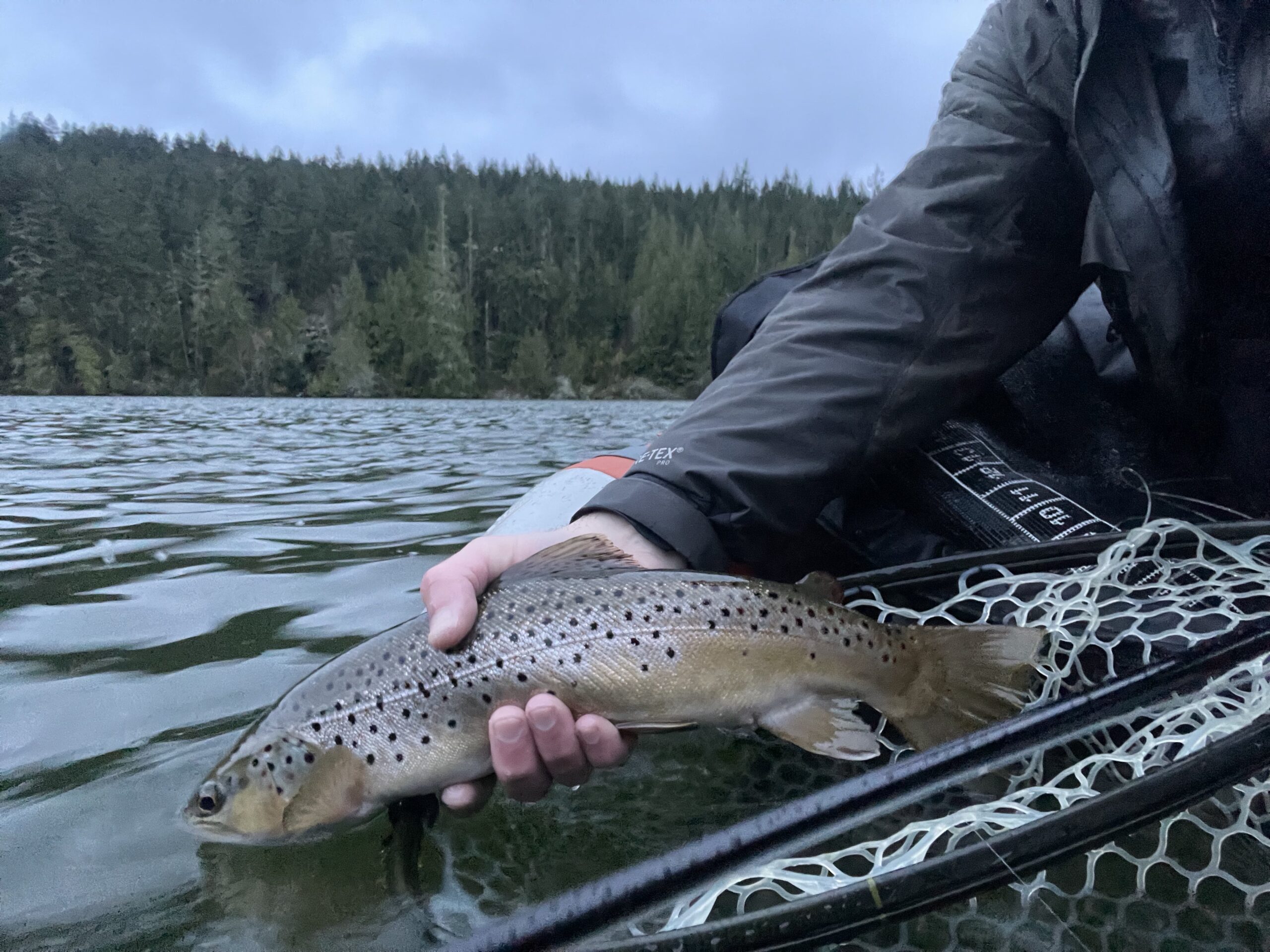 Lakes
While certainly not the prime time to be fishing stillwater, many of our year round lakes offer a reasonable alternative to catch fish when our rivers are jumping their banks. Pass and Lone both fished very well last month. The normal winter fly fare is fishing bloodworms (chironomid larvae) near the bottom, micro leeches or attractor patterns like Boobies and Blobs. Cranberry Lake in Deception Pass State Park was stocked last month with some bigger trout, so there is opportunity there as well. Check the WDFW stocking reports for more details.

Beaches
Winter cutthroat fishing is pretty good right now in Hood Canal and South Puget Sound. We see some anadromous bull trout and a handful of cutthroat around the east side of Whidbey this time of year, so it’s worth a look if you’re hankering for the beach. 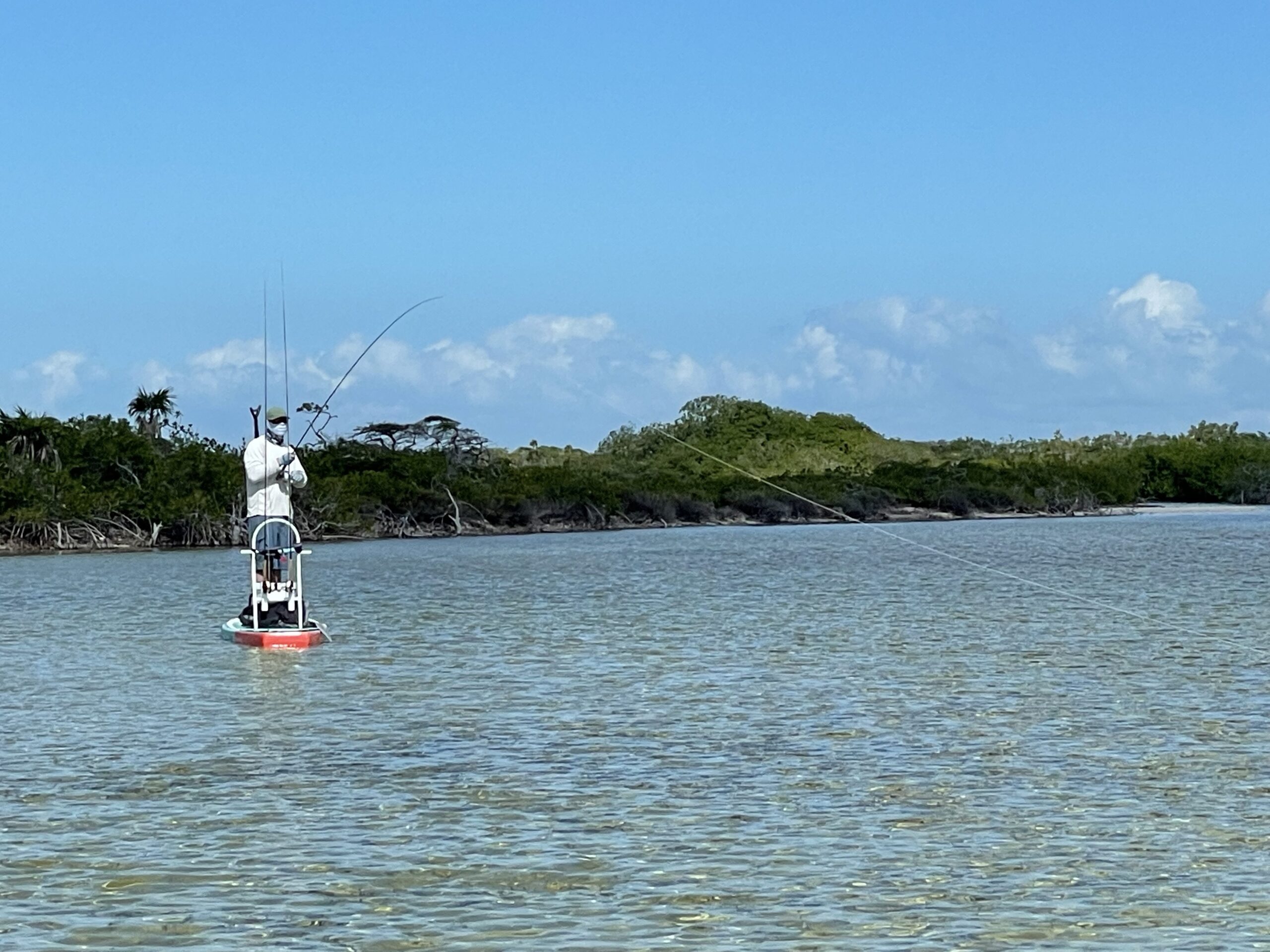