After a seemingly endless dark, damp, cold and dreary winter, we are beginning to see a light on the horizon. With barely a month until the official start of Spring it’s been awesome to begin the process of reacquainting ourselves with the sun for a couple of days over the past few weeks. Of course we all know that Spring in the Pacific Northwest can mean just about anything, but the anticipation of upcoming fisheries, potentially better weather and the joy of watching the landscape simultaneously bloom and thaw out brings us one step closer to our happy place.

Speaking of happy places, it was nice to have the Nooksack back open for at least a couple of weeks, and even have it remain in fishable shape through much of that period. There were steelhead around at times along with the ever present bull trout. I admittedly go a little nuts when the possibility of steelhead exists within a 20 minute drive and a predawn wake-up call. I am hopelessly attracted to the asceticism of slipping into cold clammy waders as 34 degree wet snow piles at the base of my neck to go look for something that may or may not be there. I knocked on a lot of doors so to speak in the wee hours before work. The knock even got answered a few times and now the part of me that awakens on the Nooksack every January can sleep in once again for the better part of another year. 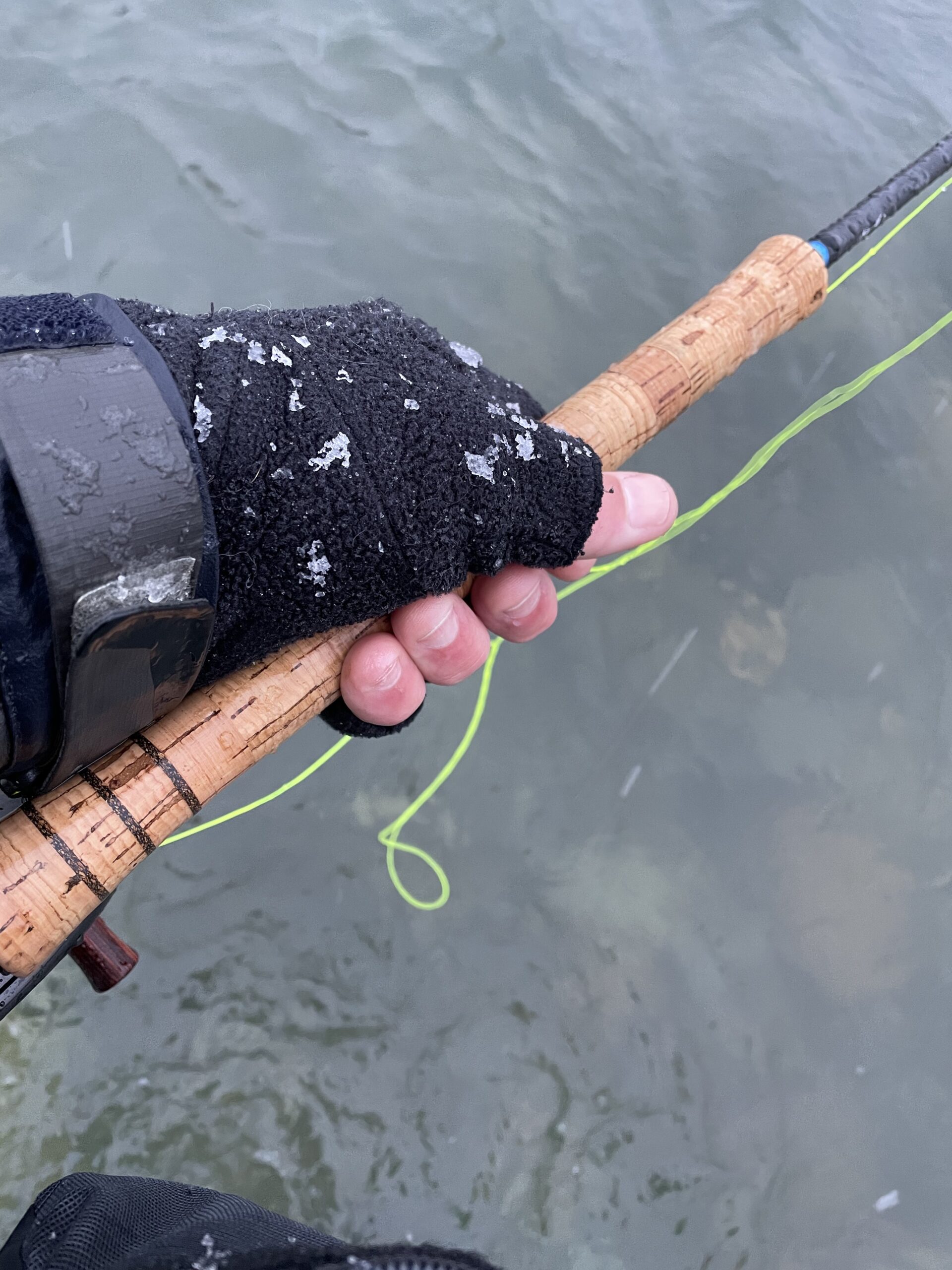 We’re really excited for our trout lakes to begin warming up and for a more frenetic pace of catching fish to commence. Bass and panfish will be hot on their heels, fry-crushing cutthroat and bull trout off the beaches, mid-day hatches on the Yakima and just a few short months away, enough daylight for many of us to grind out an hour or two on the water after work…arguably the most satisfying way to cap off the day.

There’s a lot to look forward to right around the corner. Now is the time to be dusting off and organizing your gear, filling the voids in your fly boxes from last season, making plans and most certainly stopping by your local fly shop for anything you may be missing. It’s been pretty quiet around these parts and we miss your smiling masked faces. It was great to catch up with folks during the 2022 Fly Fishing Film Tour at the Lincoln Theatre last month. We were honestly surprised by the turnout given the whole pandemic and all. Certainly not a packed event as in the past, but a good showing, lots of excitement and energy and folks excited to get a healthy dose of high octane fly fishing from around the world.

Shake off those winter doldrums and get after it! Here’s the skinny on available fly fishing this time of year around these parts. 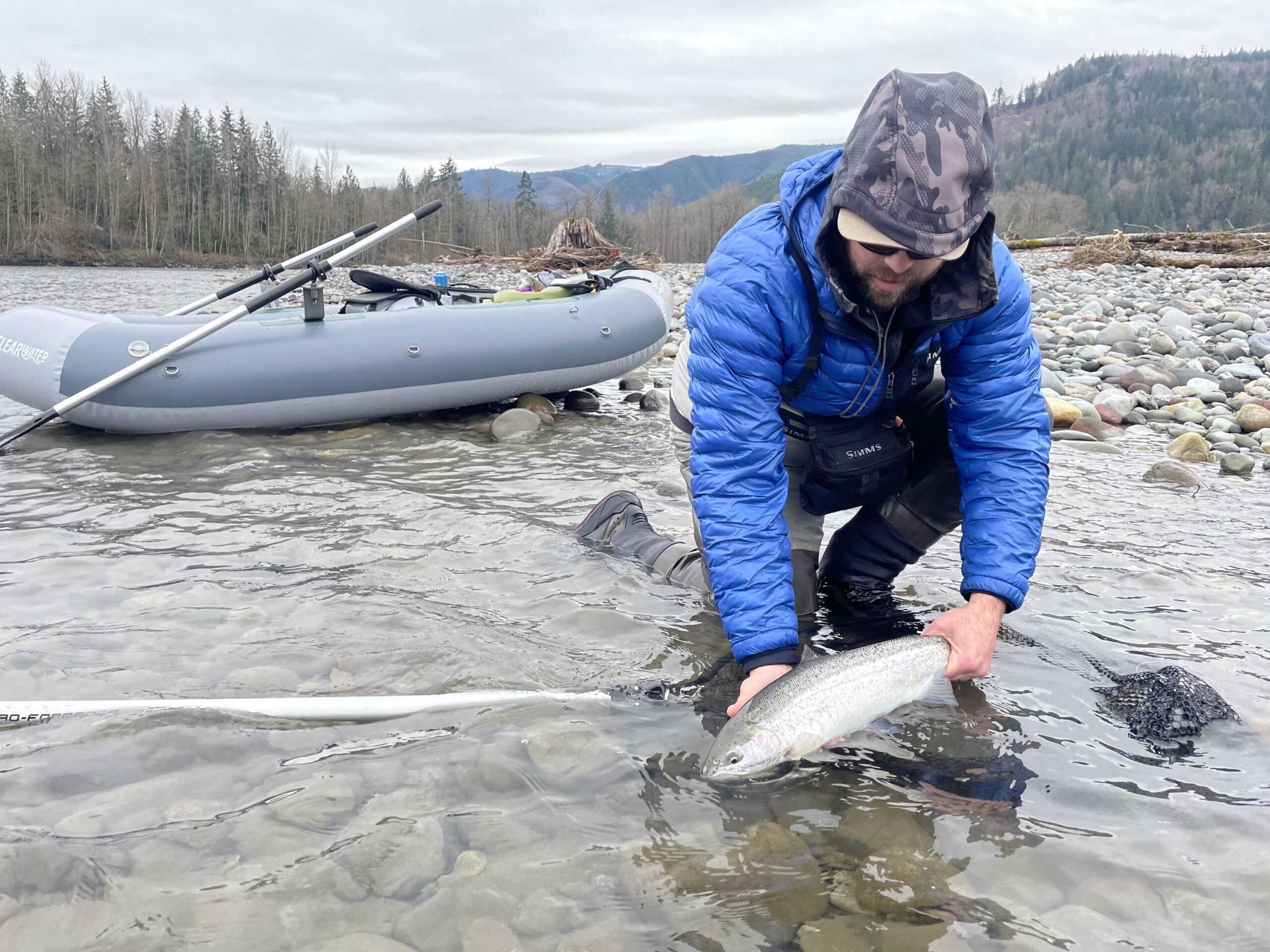 Rivers
We had a short but productive season on the old Nooksack. The Skagit and Sauk fished really well at the end of the season in January too. It’s a shame we won’t have a spring fishery on the Skagit/Sauk this year but the steelhead numbers aren’t forecast to be there this season so what are you going to do? The Olympic Peninsula remains open through the end of March. Read up on emergency restrictions before you go as not all rivers are open this year. As you would imagine with all the closures, it’s pretty busy over there these days, but if you’re willing to hike or get creative on your float timing you can find some river bar to yourself. The Nooksack was as busy as ever before the closure, which got me thinking about a number of strategies I’ve employed over the years to try and find some semblance of tranquility on the river.

Most folks are not into walking much beyond the roadside pullout. If you’re willing to put boots on the ground and cover some turf, you may just find yourself in a zone beyond the masses. If you’re floating, which is a fantastic way to cover a variety of water, realize that as a fly fisher, you’re not going to be first water on more than maybe the initial run of the day. We fish slow, we fish methodically and we’re just plain far less effective most of the time than other gear types. That’s okay. I like to put in after the majority of boats have begun the race downriver to try and be first through everything. Take your time, fish like you’re not the 50th person going through a stretch of river and recognize that all the people that went through before you at breakneck speed so they could beat the next guy to that cherry run a few miles down probably left some stones unturned. Steelhead like other fish do go on and off the bite. Sometimes that water warming half a degree in the afternoon gets them good and active and ready to take a swipe at your fly when they just weren’t into it while your guides were icing up in the dark and you were more focused on your frostbitten toes.

Lastly, enjoy your time out there and be realistic about your expectations. There is a meditative quality to swinging flies for steelhead that is in many ways its own reward. Remind yourself that you’ve chosen the most difficult way to catch a winter steelhead there is, short of swimming the river and attempting to wrestle a fish by hand. To hook one is a major accomplishment, to land just one feels like winning the Superbowl (only without a bunch of bogus pass interference calls to help you get there). Limit your impacts, respect the fish and do your best to learn a few lessons from the river. That’s an achievement in my book. Beyond all that, we’ve got the gear and the flies to help you in your endeavors. 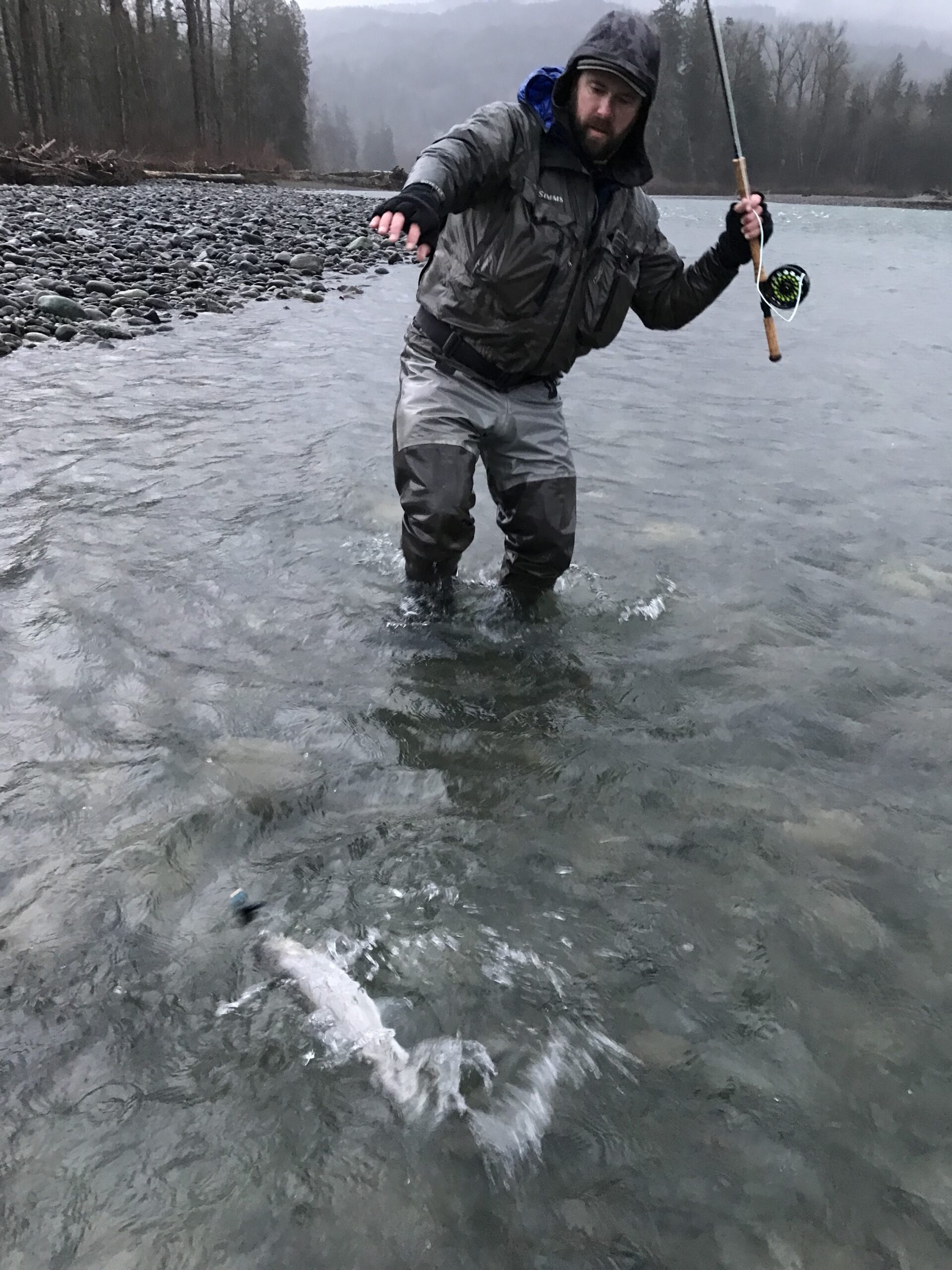 Outside of steelheading, there’s a few viable trout options in the rivers out there. The Yakima is certainly worth a visit. As we enter the spring, warming water triggers the first significant bug hatches of the year. After a long winter, trout are hungry and a quickening metabolism fuels the need to eat more. Swinging sculpins is still really productive right now, as is fishing a nymph rig, either below an indicator or using Euro tactics. Small Lightning Bugs, PT’s, Rainbow Warriors and the like combined with a Pat’s, Jig A Bugger or Egg pattern is also a good bet. Rocky Ford spring creek is another good winter destination. As a spring creek, the water temps are really conducive to year round feeding and insect hatches. This time of year you can expect daily midge hatches and some blue wing olives. Small olive scud patterns catch fish every day at the “Ford”, as will streamer tactics with big Bunny Leeches and attractor patterns when the bugs aren’t coming off thick (and sometimes even when they are).

﻿The Skagit will open from the Memorial Hwy. Bridge in Mount Vernon downstream to the mouth of both forks on March 1st. If river levels remain on the lower side this can be a really good fishery for cutthroat and bull trout. Woolly Buggers, Zonkers, Clousers and Fry patterns cast near structure are the ticket here.

Lakes
With warmer daytime temps and longer daylight hours, lake temps are hovering in the lower forties in most North Sound lakes, meaning we’re getting ever closer to the first good chironomid hatches of the year. On open lakes like Lone, Squalicum and Grandy we typically begin to see chironomids coming off as early as late February and the first days of March if the weather stays reasonably warm. Absent a hatch, your cold weather staples like chironomid larvae (bloodworms) and small black, olive or brown leeches will work best. Don’t overlook attractors like Boobies and Blobs too this time of year. They have often caught fish when nothing else seems to get it done. Please note that while technically still open for fishing, the parking area and boat launch at Pass are closed indefinitely due to a large sink hole beneath the lot that needs to be repaired. A number of eastside lakes open March 1st like Dry Falls and Lenice and Nunnally. Check your WDFW fishing regulations for additional options. 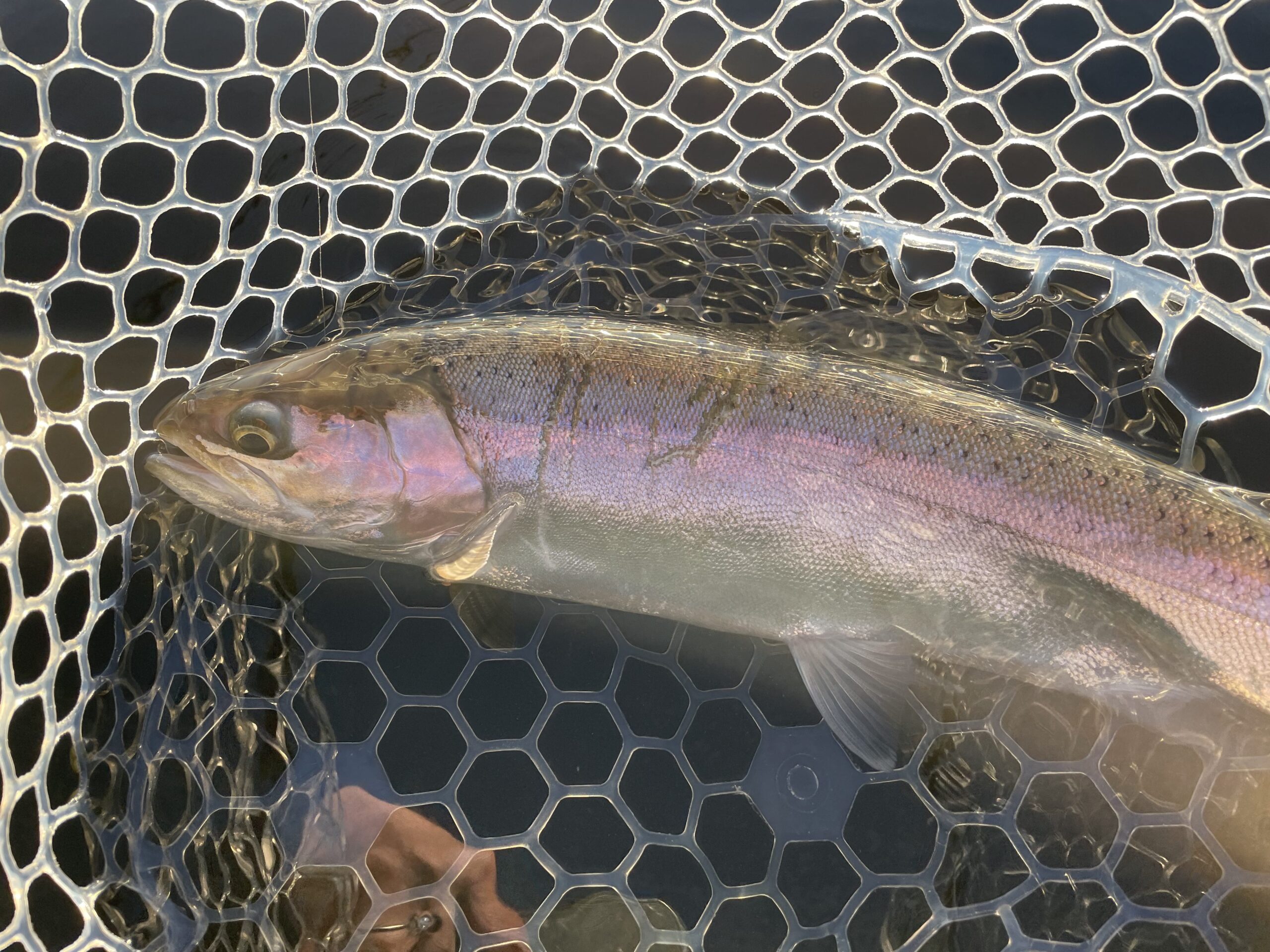 Beaches
It’s getting close to fry time. When the millions of pink and chum fry begin out-migrating into Puget Sound in early March it’s chow time for cutthroat and bull trout in the salt. South Sound and Hood Canal tend to get earlier fry than here in the Northsound, but it’s time to get ready for some frenzied fishing in shallow water.