2020, the year many would just as soon obliterate from the memory banks has drawn to a close. As with all new years, we can begin with a mental clean slate, an opportunity to learn from past mistakes and misdeeds, an opportunity to advance and discover something new, a chance to better yourself or seek to better those around you through the osmosis of being kind and decent. Aside from the many calamities and misfortunes that befell the human race in 2020, it wasn’t too terrible on a personal level. The standstills and shutdowns curtailed many a travel plan, many a meeting, many a social obligation and the pace of life slowed down just a little. I for one, tried to fill many of those voids with fishing and like most ventures to the stream or lake or salty beach, can’t say I regretted any of it. Sometimes fish were caught, sometimes the day was occupied with lots of repetitive casting and very little activity on the part of our finned friends. Still, the mind wandered, even went completely dormant at times. Fishing is escapism at its finest.

We want to wish you a happy new year from the Confluence Fly Shop and hope that you too have at least a few fond memories from 2020 and like us are poised and ready take on 2021, fly rod in hand. Winter fishing in North Puget Sound is what it is. Sometimes there are fish around, sometimes it’s pretty dead out there. You come to really appreciate those days when your line suddenly comes tight a few times and something lively dances on the end. Those willing to put in some time will find fish. That first and last fish of the year always seems to stick in my memory, be it a chrome and vivacious steelhead or a diminutive whitefish. Just pray it’s not a foul hooked sucker, in which case you’re probably doomed for the next 12 months. Call me superstitious.

It’s winter tying season for a lot of folks, maybe the wiser of the bunch. If you’re not fishing right now, tying is a fantastic way to stay engaged in the sport you love. Practicing casting, cleaning and organizing your gear is another great option. Don’t worry, spring will be here before you know it. At least the days are getting a little longer. Thanks for all your business and support last year and we hope to see the trend continue in 2021. It’s amazing to see people uniting with their passion for fishing and a ton of newcomers diving headfirst into the world of fly fishing. I think being engaged in an activity that’s so intertwined with a clean and healthy environment spawns people that naturally want to take care of the outdoors, protect and conserve it. One easy way you can help is to support a local conservation organization. Read on for an easy opportunity to support North Sound Trout Unlimited and potentially win a box of my hand tied steelhead flies.

In the meantime, continue to stay healthy, warm, connected to family and friends and don’t forget to wet a line now and again (and stop by your favorite local fly shop). 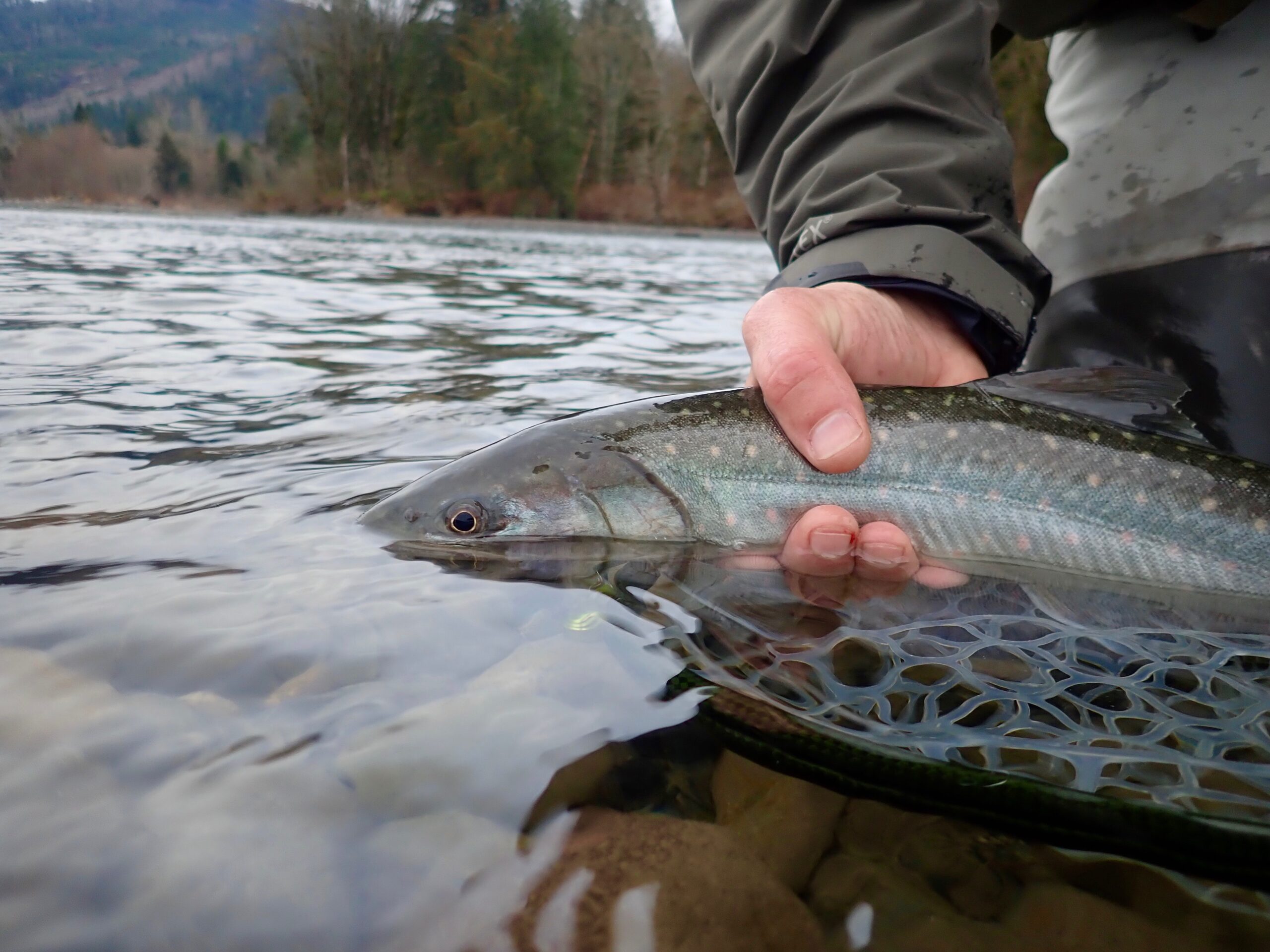 Rivers
It’s still predominately river season in the North Sound and beyond, whether you search for the elusive winter steelhead, catch a bull trout or two or get the drop on a bunch of whitefish. Most of our Puget Sound rivers close at the end of the month, so time is running out. We’re getting reports of a mix of hatchery and early wild winter steelhead showing in the Nooksack and some early wilds in the Skagit and Sauk. Beyond steelhead, streamer tactics for bull trout and nymphing for resident trout and whitefish are still on tap. Early in the season, there aren’t a ton of fish around so it pays to go often and cover some water. In a perfect world, I’d rather fish the same run or two for a few hours several days a week than have only one day out there from dawn to dusk. Some days there’s new fish around, sometimes there aren’t.

Having been out 3 or 4 times on the river this year, I’m reminded just how relaxing it is to cast and swing a spey rod working your way down a big broad run. You can go on autopilot, you don’t have to watch anything, your mind wanders and you simply need to maintain enough feeling in your arms and hands to manage a cast deal with the big pull once it happens. Sometimes people ask us if it’s worth it to go fishing this time of year. In my esteem, it’s always worth it. If you have to catch a fish to validate the experience, it might not be every time. When you do get one, I promise it’ll all make sense. 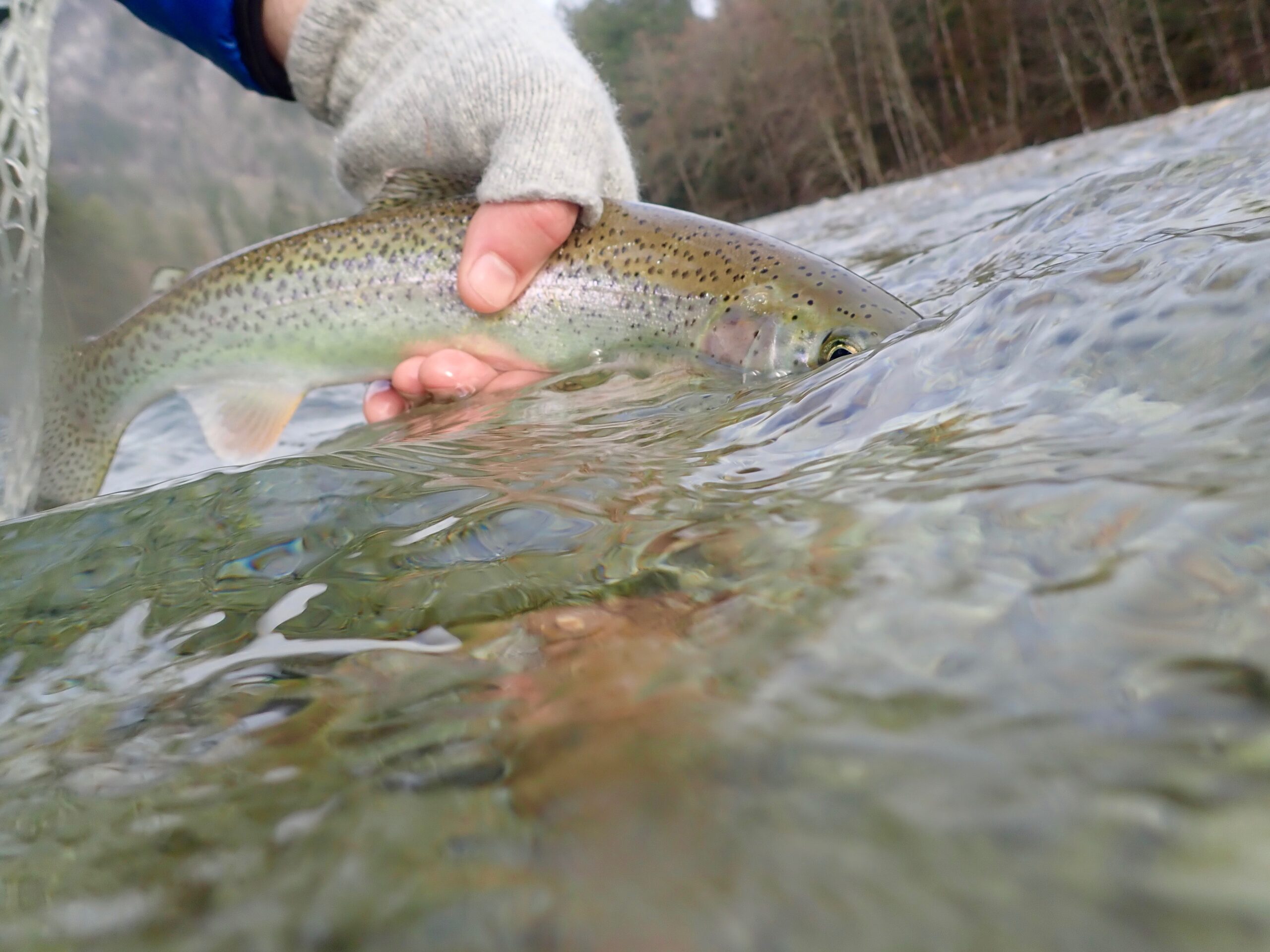 Once rivers close in the North Sound, we continue to have the Yakima in our back pocket to get the trout fix. As a tailwater fishery, the Yak can produce well throughout the winter. Small midges, the occasional blue winged olive hatch, fishing streamers, all work at times during the colder months. 25 degrees on the east side still feels considerably warmer to me than 36 and raining over here. The Olympic Peninsula rivers will mostly remain open for steelhead through April 1st and I’m planning for a trip or two over there this year since the likelihood of fishing our BC rivers to the north this spring is next to nonexistent. Forecasts for wild steelhead returns on the Coastal Washington streams this year are not great. As such, the WDFW has enacted emergency regulations which include no fishing from a boat and mandatory wild rainbow trout release. We applaud the department for their forward-thinking actions to balance both the desire to offer a fishery and at the same time, greatly limit impacts and encounters with wild steelhead. We just got a big order of winter steelhead flies in so we’re well-stocked for the winter and spring. Hoh Bo’s, Intruders, Loop Leeches….pick your poison. They all work, but only when you give them time in the water. 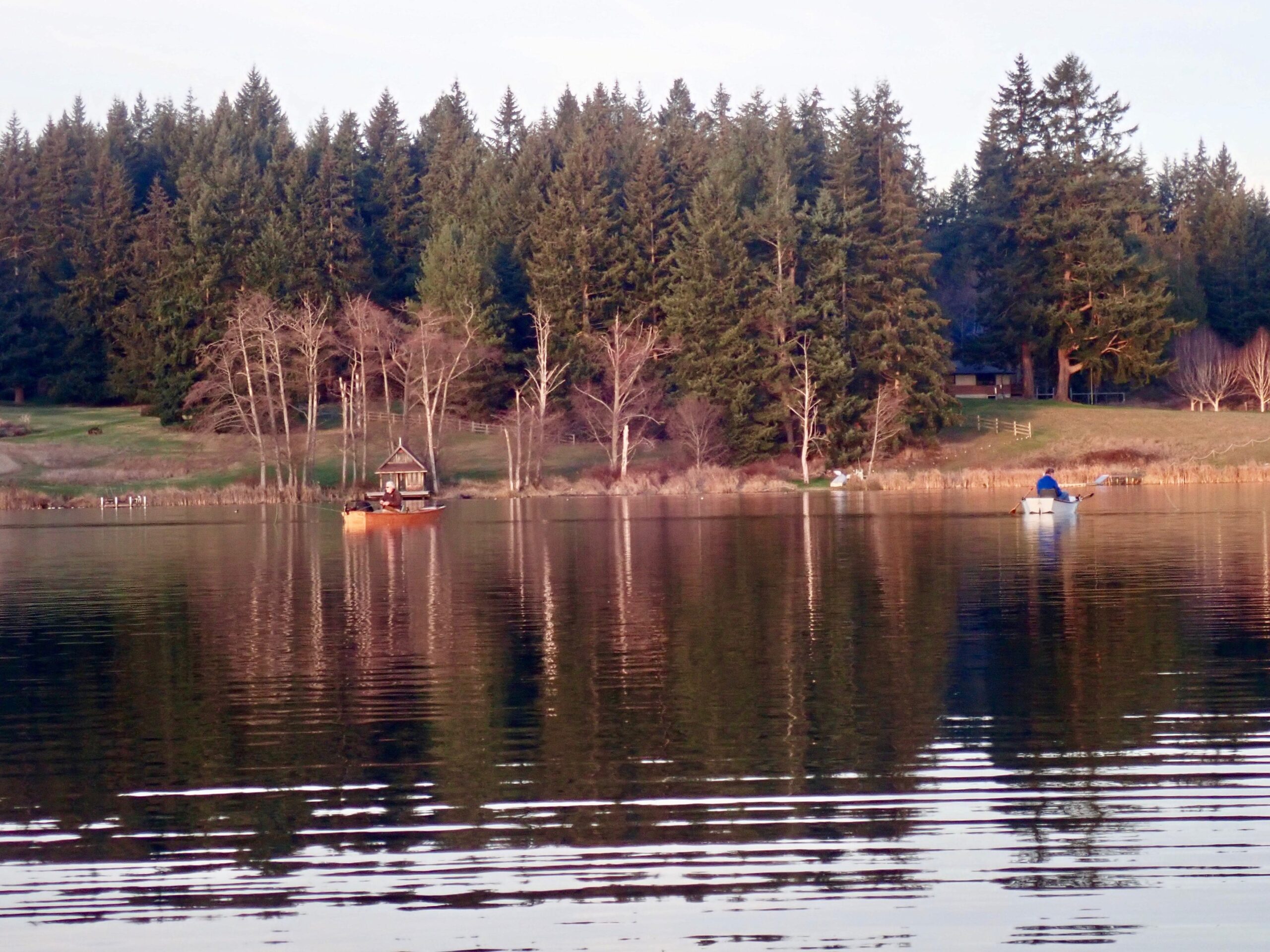 Lakes
Years ago, the thought of fishing a lake in December and January never really crossed my mind. With the reduction in local steelhead fisheries and the fact that the rivers are frequently in and out of shape (yep, they’re out for the moment), spending time on our year round lakes has become a viable and often productive alternative. I primarily fish Lone and Pass in the winter, though Squalicum, Grandy and others that remain open can fish decent as well. The former, being so proximal to Puget Sound, seem to stay a tad warmer. I’ve fished both Pass and Lone in the last month and have done well fishing bloodworm patterns near the bottom, usually under an indicator on a floating line. The Hot Bead Fire Worm, San Juan Worm and BC Bloodworm patterns are a few of my favorites. Small Simi Seal Leeches, Hale Bopps in black, olive or brown work well on sinking lines as an alternative, as do attractors like White Bunny Leeches and Boobies.

Beaches
It’s slim pickings in the North Sound this time of year usually but we periodically find sea run bull trout, the odd cutthroat or resident salmon out there. Olive or white Polar Worms, white Clousers and big Deceiver patterns work well. Watch the wind and check the Skagit River levels before venturing out to the east side of Whidbey. There can be a lot of debris in the water this time of year so be safe! 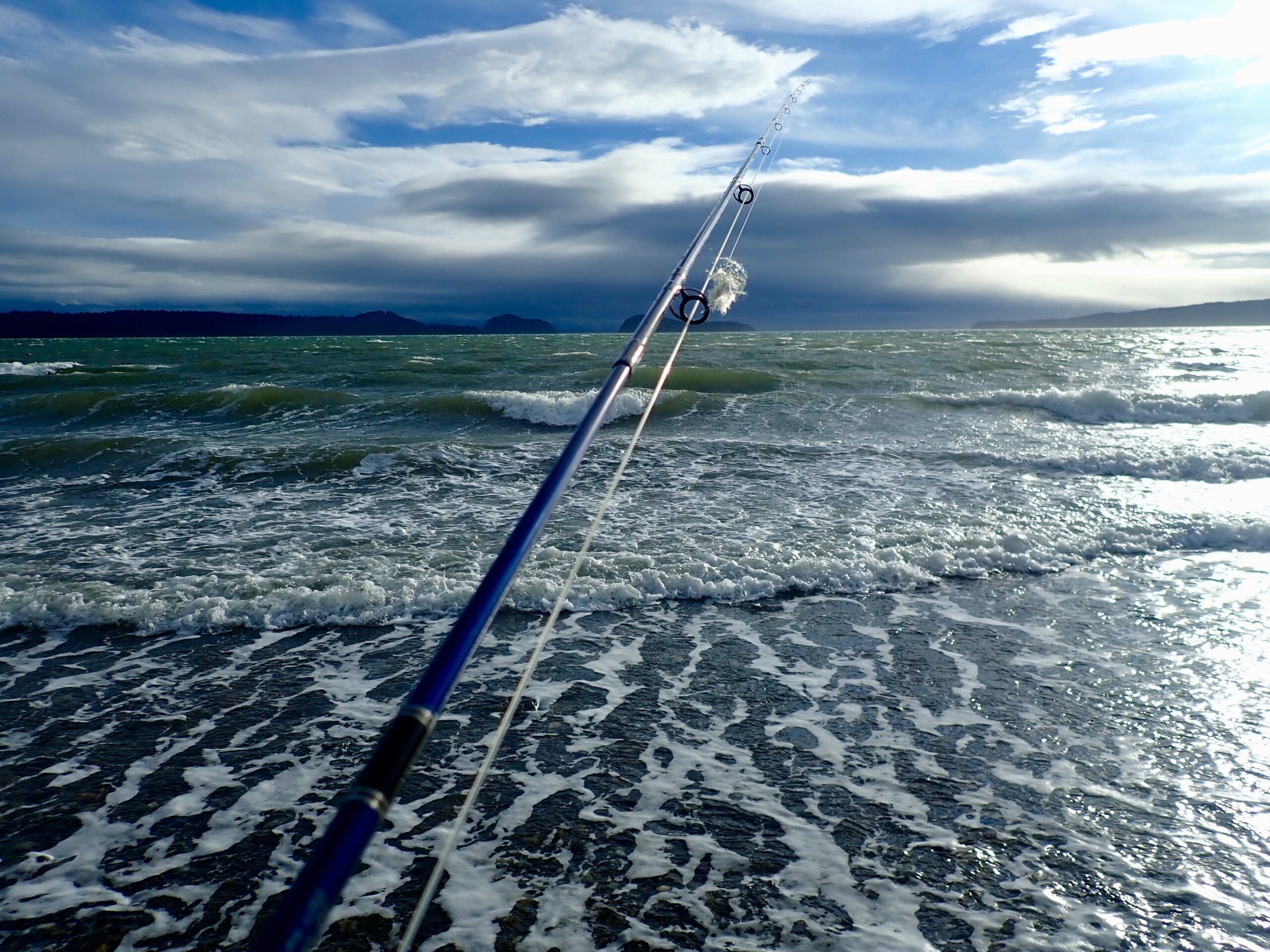