Here we are in early July, with the shack nasties of our abysmal winter just a fleeting speck in the rearview mirror. With much of the country melting down in a soaring heat wave, we’re reminded how lucky we are to enjoy our utopian summers in northwestern Washington. Rivers are shaping up, some of our lakes are still fishing well and a much-anticipated saltwater salmon season off the westside of Whidbey is fast approaching. There are enough fly fishing options to choose from right now that it can get a bit overwhelming, but never fear, you’re bound to have a good time no matter which you choose to sample. We going to loose one of the best summer wild char and trout fisheries on the Skagit and Sauk after July 15th when the WDFW has elected to close it this year, which is more than disappointing, but we’re trying to look at it as an invitation to explore new waters and spend some time fishing places that sometimes get eclipsed by the more popular summer “S” river fisheries. Slather on the sunscreen, fill up a few water bottles, take your fly rod and a box of flies, find some willing fish and revel in the sunshine while it lasts. 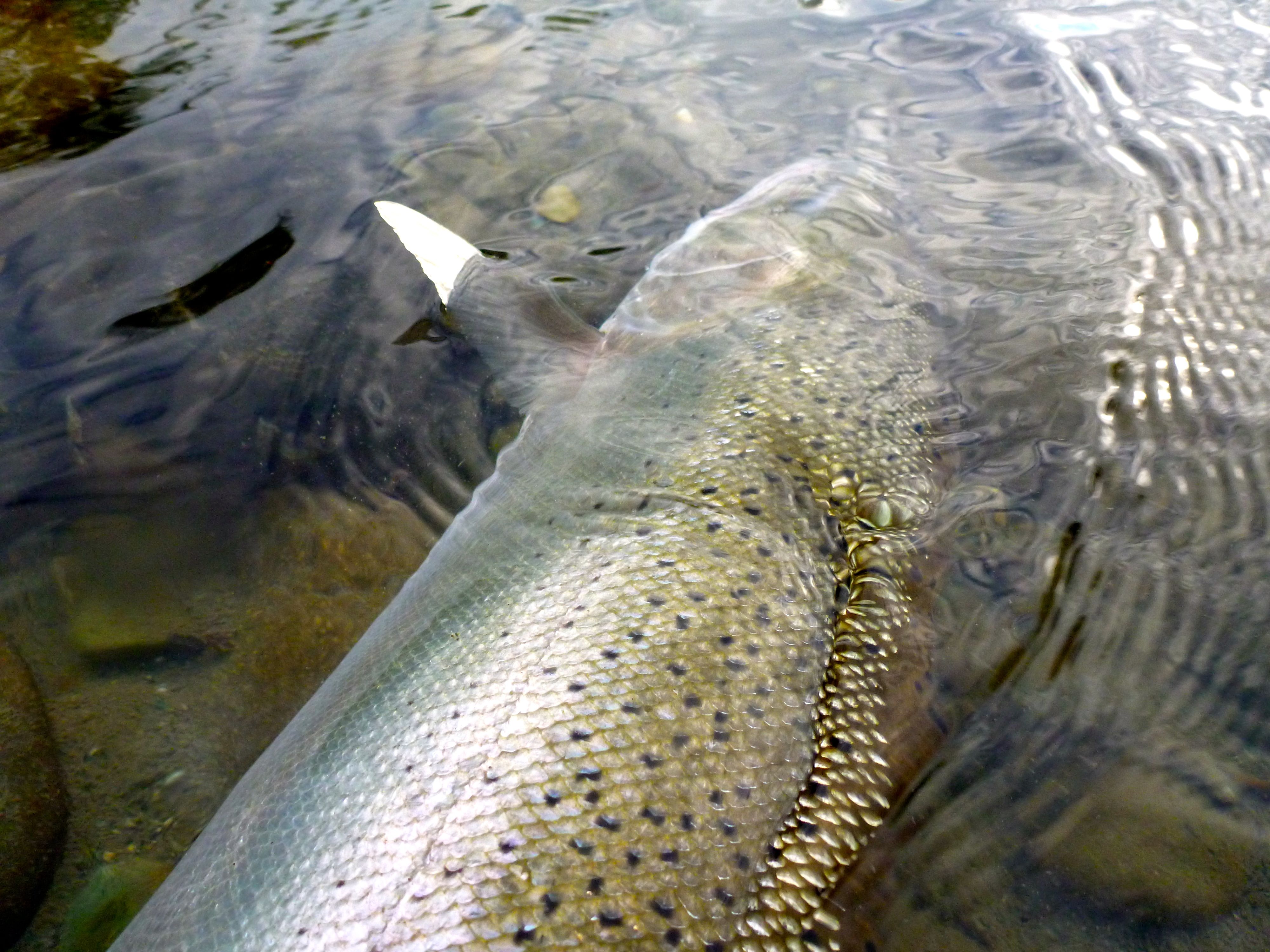 Rivers
Many of our streams are finally starting to shape up nicely after weeks of high and sometimes dirty water. Lower elevation rivers like the Stilly are in great shape as of this writing and even the Methow is dropping toward the fishy zone. While it’s taken a bit longer than normal for run off to subside, the good news is that our late July and August rivers will hopefully have decent flows and cool water in them, which is both good for the fish and the fishing. Here’s the lowdown on our local moving water. The Skykomish system and Stilly have been producing some summer steelhead. Smaller marabous, Hoh Bo Speys and scaled down smaller Intruders have been working in addition to traditional patterns like Purple Perils and Skunks. The Stilly is in beautiful shape throughout right now. Unfortunately it will close July 31st to protect the forecast low abundance of coho and pink salmon. Although the NF Stilly is already closed to salmon angling and restricted to single barbless flies during much of its regular season, we are going to miss out on some fine fall cutthroat and steelhead fishing this year because of the closure. It’s really tough to wrap our heads around some of the WDFW’s management decisions these days. There’s not much point to reporting on the Skagit, Sauk, Cascade, Whitechuck or Suiattle either, since they’ll all be closing on July 15th for the same reason. At least the Nooksack is open (except for the SF below Skookum Creek to the mouth) and in reasonably good shape. 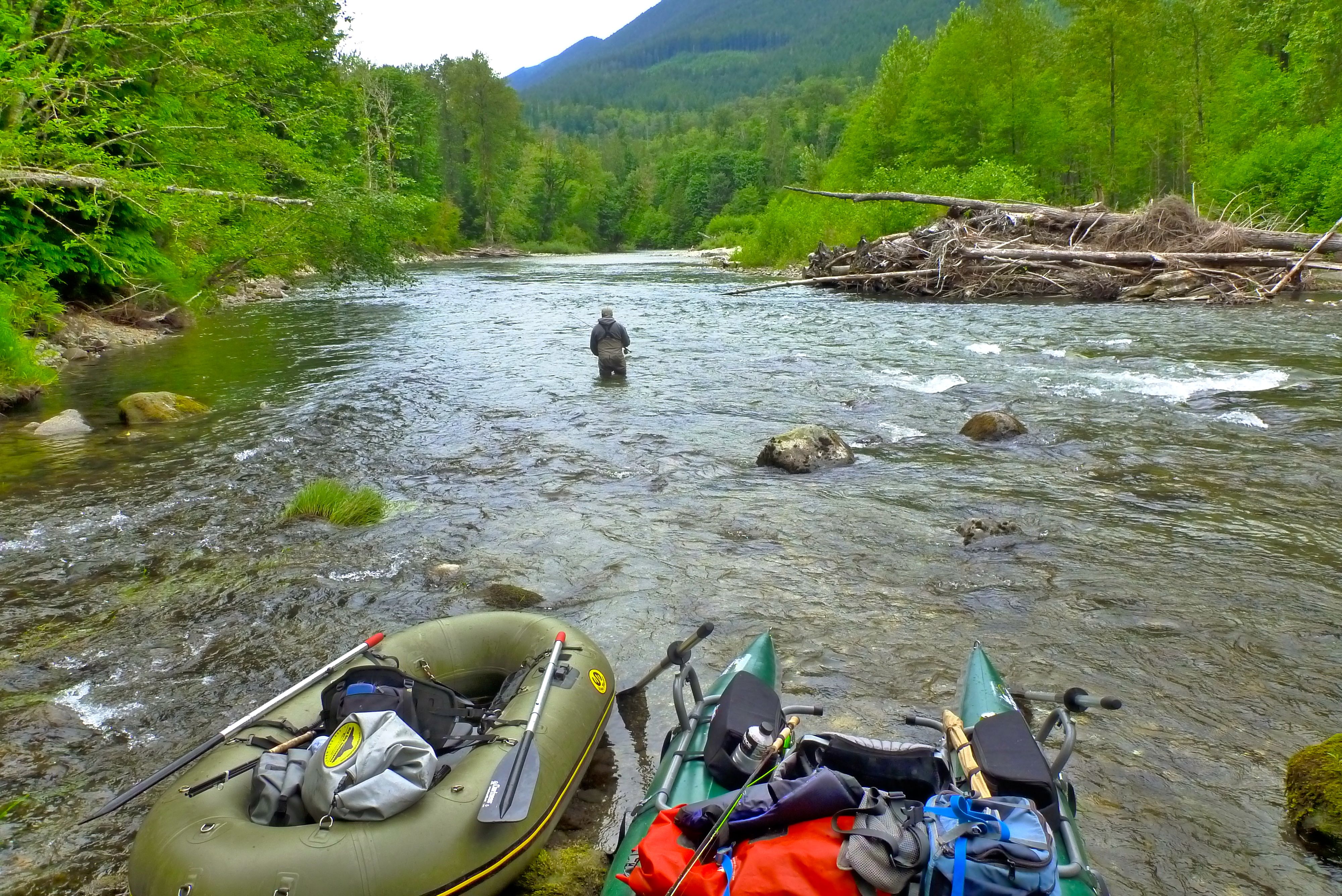 We are finding the odd bull trout in the NF and mainstem this time of year, with a pink salmon fishery slated to open on the mainstem up to the yellow marker behind the FFA barn in Deming on July 16th. Look for pink numbers to build as we get closer to the end of July. 6 wt. rods, floating lines and light poly leaders or tips with an arsenal of small pink flies like Aviators, Sparkle Bombs, Comets and Starlight Leeches should keep you into fish. If the clarity is 3′ or better, go small on your flies. When visibility deteriorates with glacial melt, size up your presentations. The Nooksack above the falls is in decent shape, albeit a tad high, but should begin fishing well this month. Several of the Nooksack tributaries, like Clearwater Creek, are also beginning to get to fishable levels. Small attractor dry flies like the Royal Wulff, Stimulator, Humpy and Purple Haze will work well up there. Don’t be afraid to swing a small streamer, like a BH Woolly Bugger, Wounded Sculpin or Muddler Minnow through some of the deeper pools on the creeks. You will be occasionally surprised by what you find out there. The Methow and its tributaries are still running high, but should begin settling into summer flows later this month. Look for hatches of caddis, PMD’s and yellow sallies to show their stuff during the summer on the eastside streams, making way to some terrestrial action through August and September. During the higher floats, double nymph rigs, like the 1-2 knockout Pat’s Rubber Legs with a #16-18 Lightning Bug dropper is hard to beat, along with swinging Sculpzillas and Bunny Busters through some of the deeper pools. The Upper Skagit above Ross Lake opened July 1st. We haven’t had anyone up there yet, but plan to head north later this month. Early season on the Skagit produces some Golden Stones, Little Yellow Sallies, PED Mayflies, Caddis and the coveted Green Drake Hatch. Stock up before you head out. We’ve got the flies. 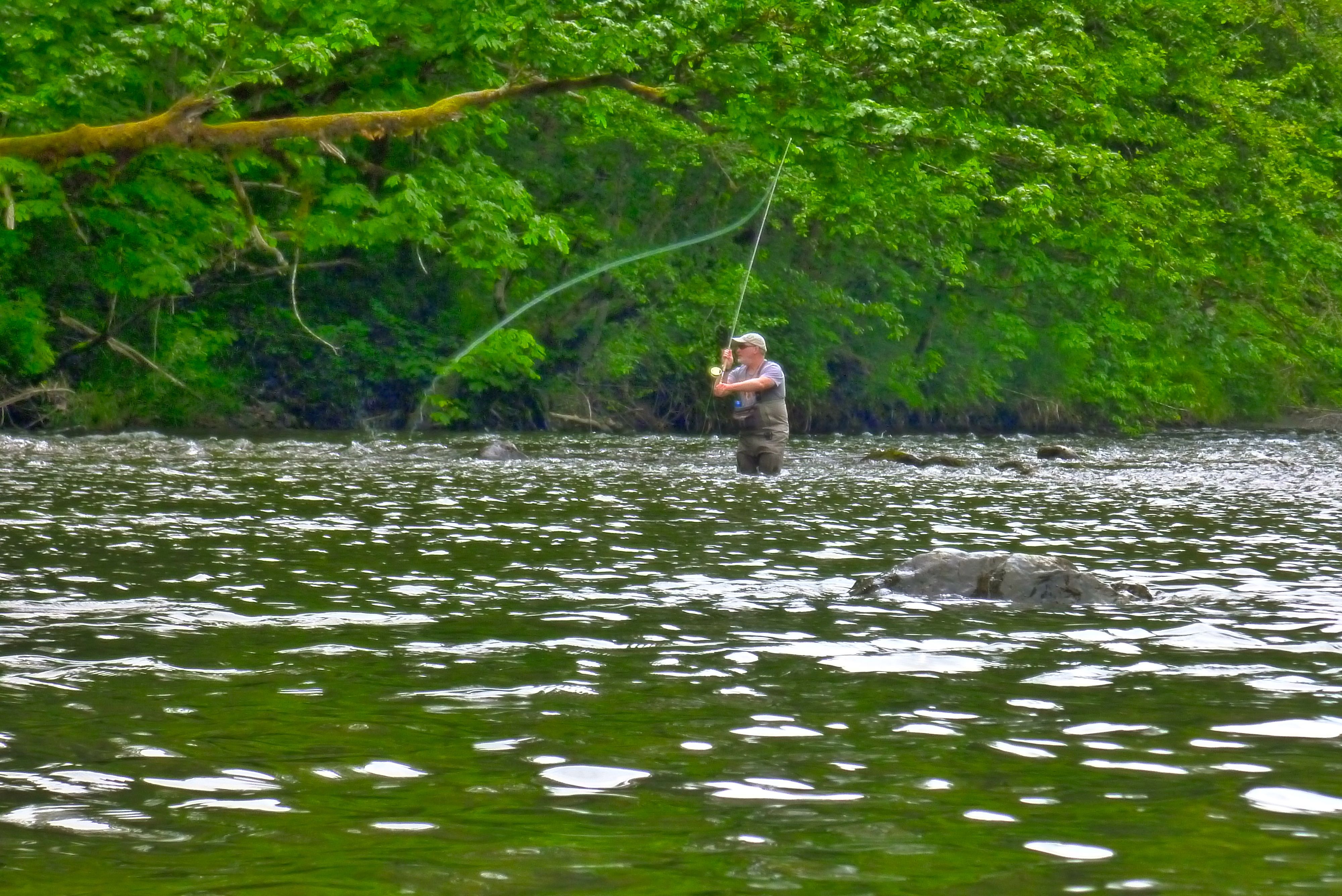 Lakes
We are still spending a lot of time on the lakes, mainly focusing on large and smallmouth bass. The hexegenia hatch is underway on Lake Whatcom, though really just getting started. Look for extensive clay/mud flats in 4-12′ of water and that is where you’ll find the big yellow mayflies hatching close to dusk. You’ll find a mix of smallmouth and some cutthroat. Please remember that all cutthroat must be released on Whatcom. If you’re not seeing mayflies hatch, brown or olive Woolly Buggers, yellow Zonkers, Lemon Drop Beldar Buggers, Clouser Minnows and white or yellow Zoo Cougars worked on sinking lines around rocky drop offs are picking up some really nice smallies. Area largemouth lakes like Terrell, McMurray and Fazon are putting out some nice topwater bass on Frog, Luna, Fire Tiger and Lime Poppers as well as diving patterns like the swimming frog. Silver Lake near Maple Falls is still kicking out some nice trout on full sinking lines and small Woolly Buggers, as well as #16 Parachute Adams, Black Gnats and Midge Emerger patterns in the evening. Many alpine Lakes are mostly still a few weeks away from being ice free but should become accessible as we truck along through the hot month. Ross Lake also opened July 1st and we plan to get up there soon. Full sink lines (type 6’s and type 7’s) and a variety of streamer patterns are your go to patterns for Ross. #6 Thin Mints, #6 Olive Zonkers, #8 BH Dude Friendly’s as well as olive/white Clouser’s work well to imitate the abundant red side shiners in the lake that serve as the main table far for the lake’s big wild rainbows and bull trout. 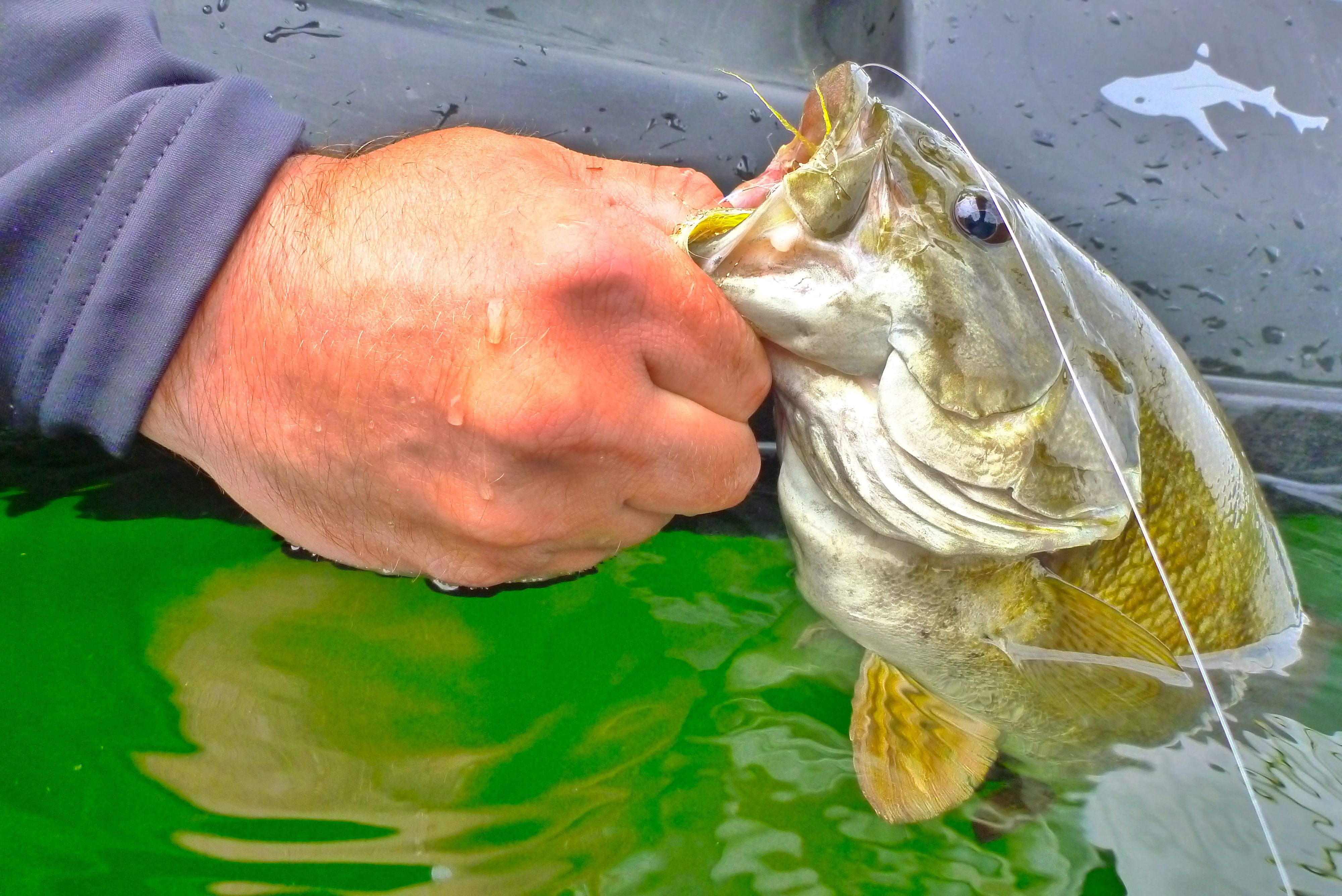 Saltwater
Cutthroat and sea run bull trout fishing in the North Sound has gotten slower over the last month, but the bright spot is that we have some summer salmon fisheries open or opening soon. The west side of Whidbey is our favorite area to fly fish for coho and pinks from the beach, focusing on prominent points like Fort Casey and Bush Point where migrating fish travel closer to the shoreline. Marine Area 9 will remain open from July 16th through September 4th this summer season for salmon so get out there while you can. Look for big outgoing tides and focus your efforts 2-4 hours before and after the high tide. Craft Fur Clousers in pink/green, olive/white, chartreuse/white and pink/white are some of our top patterns. Don’t forget to tie up a few Tung In Cheek Herring flies while you’re at it, as the coho and chinook find them pretty irresistible when they’re on herring. 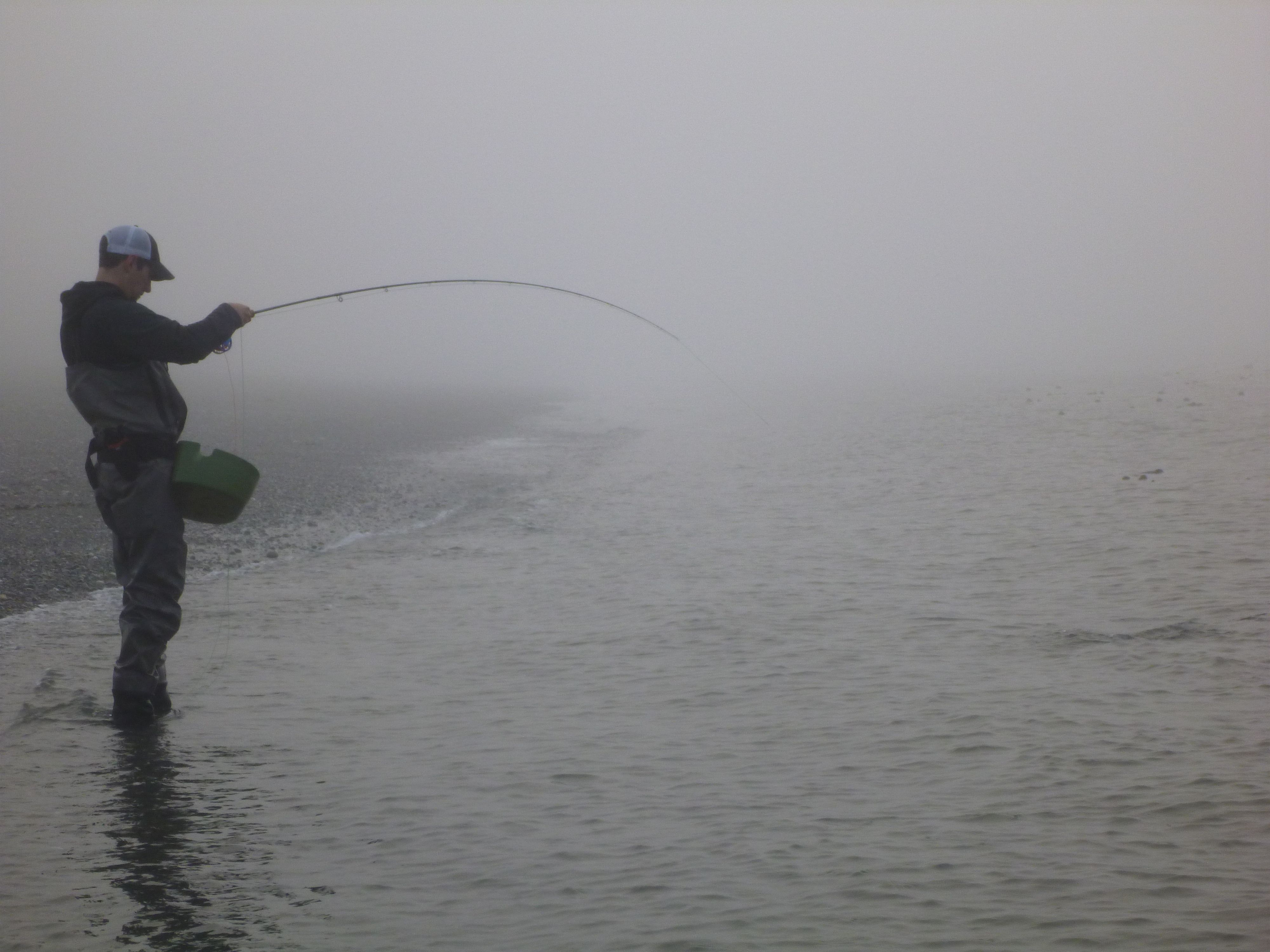