Summer has officially arrived both in terms of the passing of the solstice and that great fiery orb in the sky that warms our waters and too often likes to play hide and seek in corner of the globe. I’ve had the good fortune over many years to be able to fish as the season changes according to the calendar. Be it by design or just dumb luck, it’s kind of become my tradition to usher in the next quarter by duping a few fish and relishing in a few quiet days on the water. This year the solstice day itself felt as arbitrary as any, fading from the hot and sunny final days of spring into a windy, rain and thunder stricken tempest during the first few days of summer on the high plateaus of central BC.

We fished several lakes around the Merritt and Kamloops area, moving around to find better fishing, a change of scenery, or in one case, to simply avoid the ill effects of a lightning-sparked forest fire just a few uncomfortable miles from where we were camped and fishing. That was more than a bit unnerving as you might gather from the picture above. To complicate matters, the catching was pretty darn consistent even as the last line of trees went up in flames and big bombers dropped retardant on the blaze. Even zealous guys with serious tunnel vision when it comes to fly fishing can make a decent judgement call now and again.

As expected, we found a smorgasbord of bugs coming off, from dragons and damsels, intermittent chironomids, to a few mayflies and some big sedges motor-boating across the lake’s surface in the evening. We caught fish on lots of different flies throughout the trip in keeping with the staggering variety of naturals we observed on the water. If there was a shining star in the line up, the olive Pumpkinhead that gets so much press in BC waters was pretty consistently effective, along with a few choice chironomid patterns, smaller maroon leeches and a little brown one too. 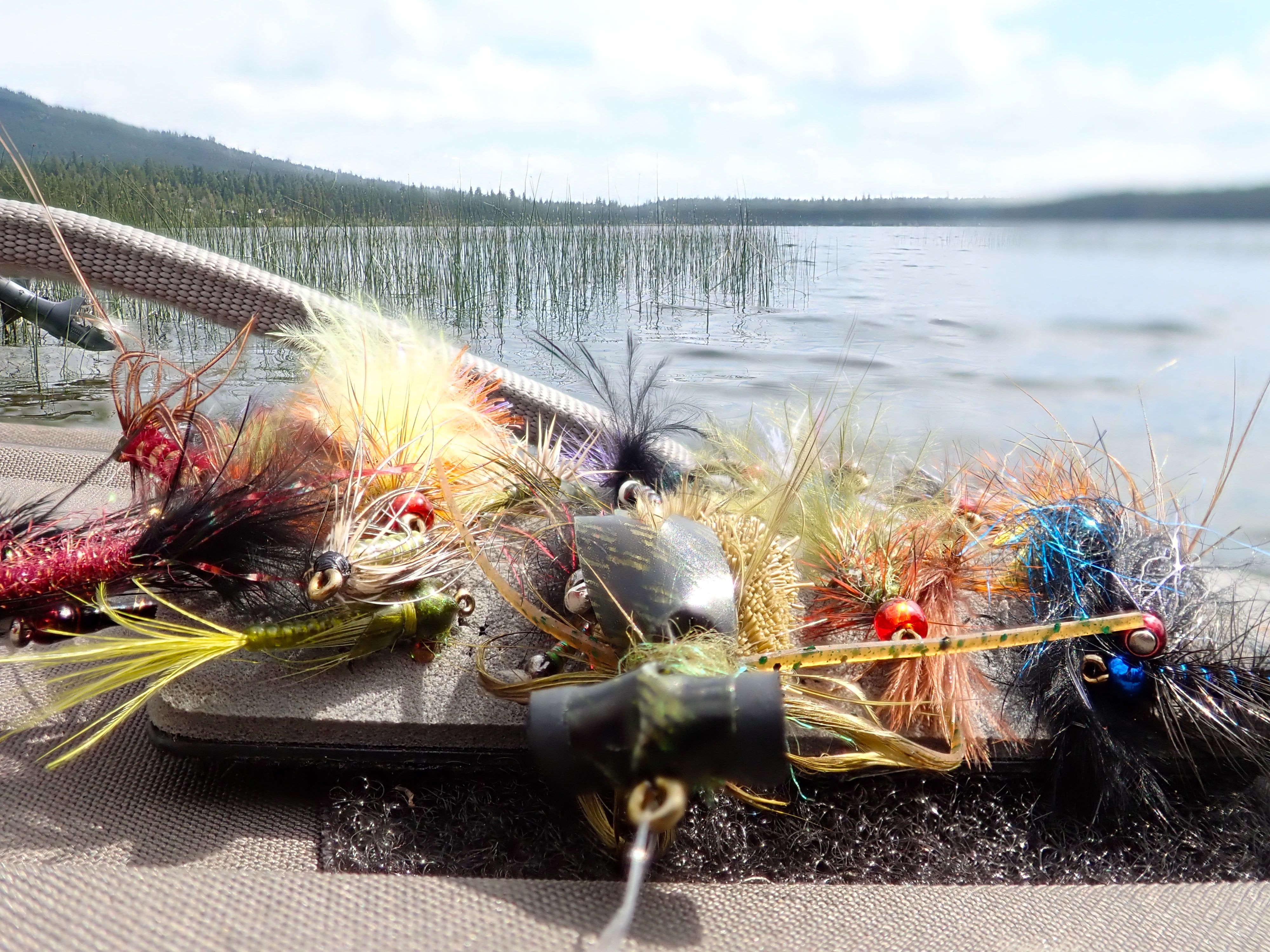 The trout were spectacular, even the small ones, and seemed to spend as much time suspended in the still air above the lake as they did screeching off into the submerged weed beds. Of course we enjoyed all the other fine camp accouterments from homemade carne asada to evening cribbage matches and a whole lot of camaraderie along the way. As most fly fisher people will tell you, it’s about a lot more than the fishing. I would tend to agree with them, however fantastic the fishing itself may also be.

There’s a lot of variety out there to enjoy in the way of our summer fisheries and they all make a pretty easy excuse to steal a moment or two on the water with friends. Whether you’re targeting surface-oriented bass on a weedy lowland lake, hunting for big rainbows in a stunningly beautiful mountain impoundment, exploring the next bend on your favorite little stream or hitting a good tide on a Whidbey beach for sea run cutthroat or coho salmon, you’ve got a lot of options and some tough decisions to make. Actually, they’re not that tough because you’re pretty OK no matter which direction you go. 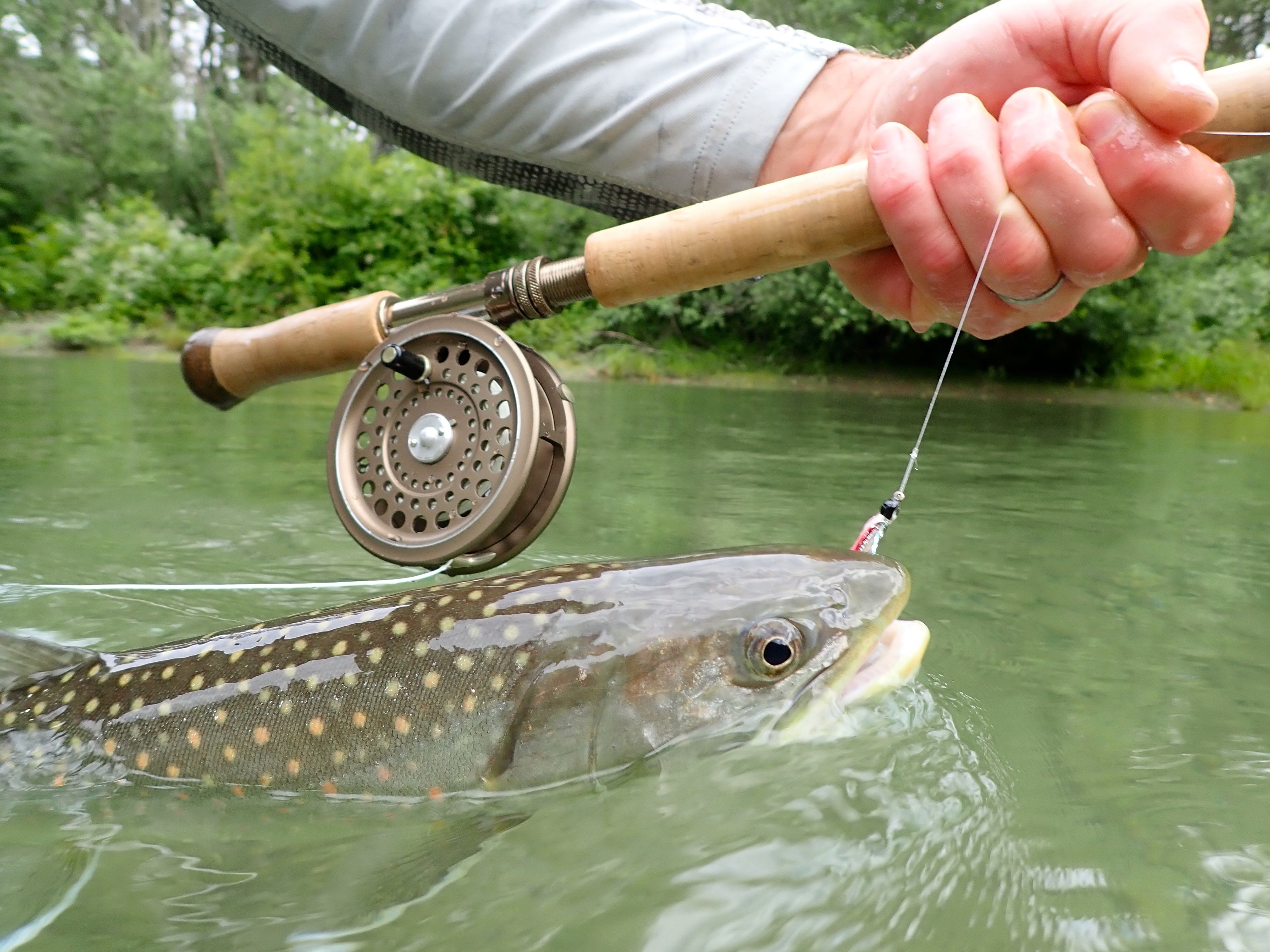 Rivers
Oh, it’s so nice to have them back. We’ve had a tough go of the last few summers with an inordinate number of river closures in the Puget Sound for some of our major local waters. Most of them are open this summer season and into fall with a few notable exceptions. The SF Nooksack from Skookum Creek to the mouth is closed until October 1 (the fly only section in the headwaters above Wanlick Cr. remains open) and the NF Stilly is closed until October 15th. The Stilly is kind of a bummer as it’s become my favorite summer steelhead water close to home over the last few decades, but the Skykomish is open and seems to have a pretty decent steelhead return going for it so far this season. Water is dropping nicely and while you can still swing your smaller, sparser marabous like Hoh Bo Speys right on through the heart of it, you should definitely have a place for those Green Butt Skunks, Freight Trains, Purple Perils and more diminutive classic steelhead patterns in your box. Oh, and Muddlers. If there is a cult of the Muddler, I am amongst its ranks. We don’t drink koolaid or burn weird symbols into corn fields like some of the more radical cults in history, we just fish a lot of Muddlers. It’s a versatile fly and catches just about everything that swims during the summer.

Our mountain trout streams like the upper NF Nooksack along with Nooksack and Skagit tributaries are shaping up nicely. The water is still on the higher side but they are mostly very fishable and running clear. If you’re a born and bred Rocky Mountain tailwater kind of fly fisher, our recommendation to pick a handful of attractor dry flies that tickle your fancy may seem rather unsophisticated and simplistic, but our west side stream trout just don’t see a lot of bugs and are pretty darn willing most of the time. Grab the 2 or 3 weight, a handful of small Royal Wulffs, Stimulators, Purple Haze, Elk Hair Caddis or Humpy’s and get ready to watch that little rod bend time and time again. 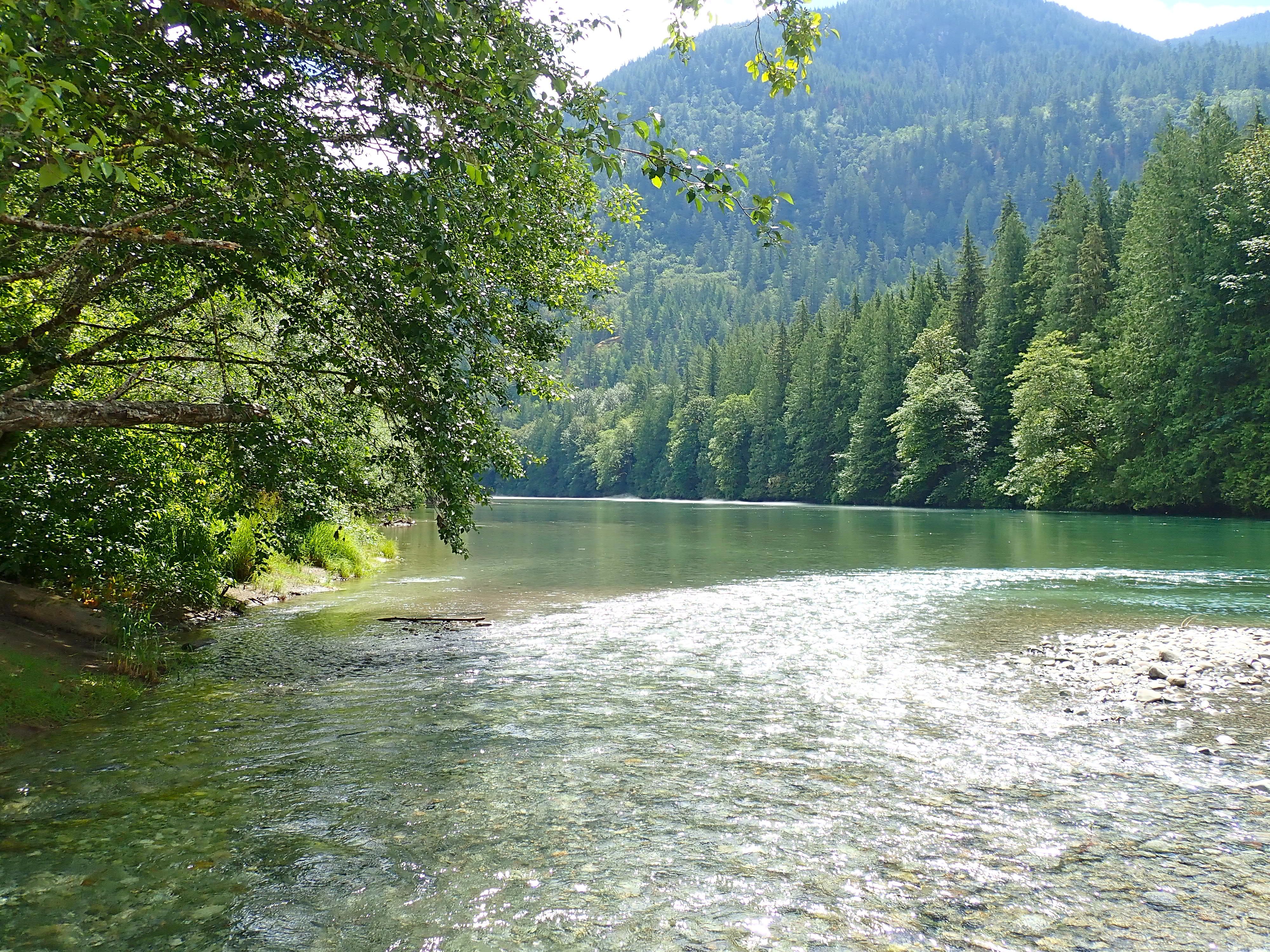 If larger salmonids are your quarry, the Skagit, Sauk and Cascade are producing some nice bull trout if you want to put the streamer rod in play. Dali Llamas, Flash Fry’s, Clouser Minnows, Sheila Sculpins and Sculpzillas on a 6 weight are game on. We have a new bull trout pattern in the shop called the Yo Mama’s Llama, an oversized black and white bunny beast that is going to wreak havoc on aggressive bull trout, especially in lower visibility water conditions like we see in much of the Sauk this time of year. The OPST Commando Heads, Airflo Skagit Scouts or Scientific Anglers Skagit Lite heads are fantastic for turning over sink tips and these meatier flies on your trout rods and are a joy to fish. If you want to do the streamer thing on the Methow east of the mountains, it’s a really effective way to pin down some of the bigger cutthroat in the system. The Methow is also experiencing hatches of PMD’s and caddis right now if you want to fish bugs and get into some nice fish. If the trout do not seem to be looking up, small nymphs like the Lightning Bug, Copper John and Rainbow Warrior frequently do the trick, either fished in tandem with a larger nymph like the Double Bead Stone or Pat’s Rubber Legs or below a buoyant visible dry like the Foamulator or Chubby Chernobyl. 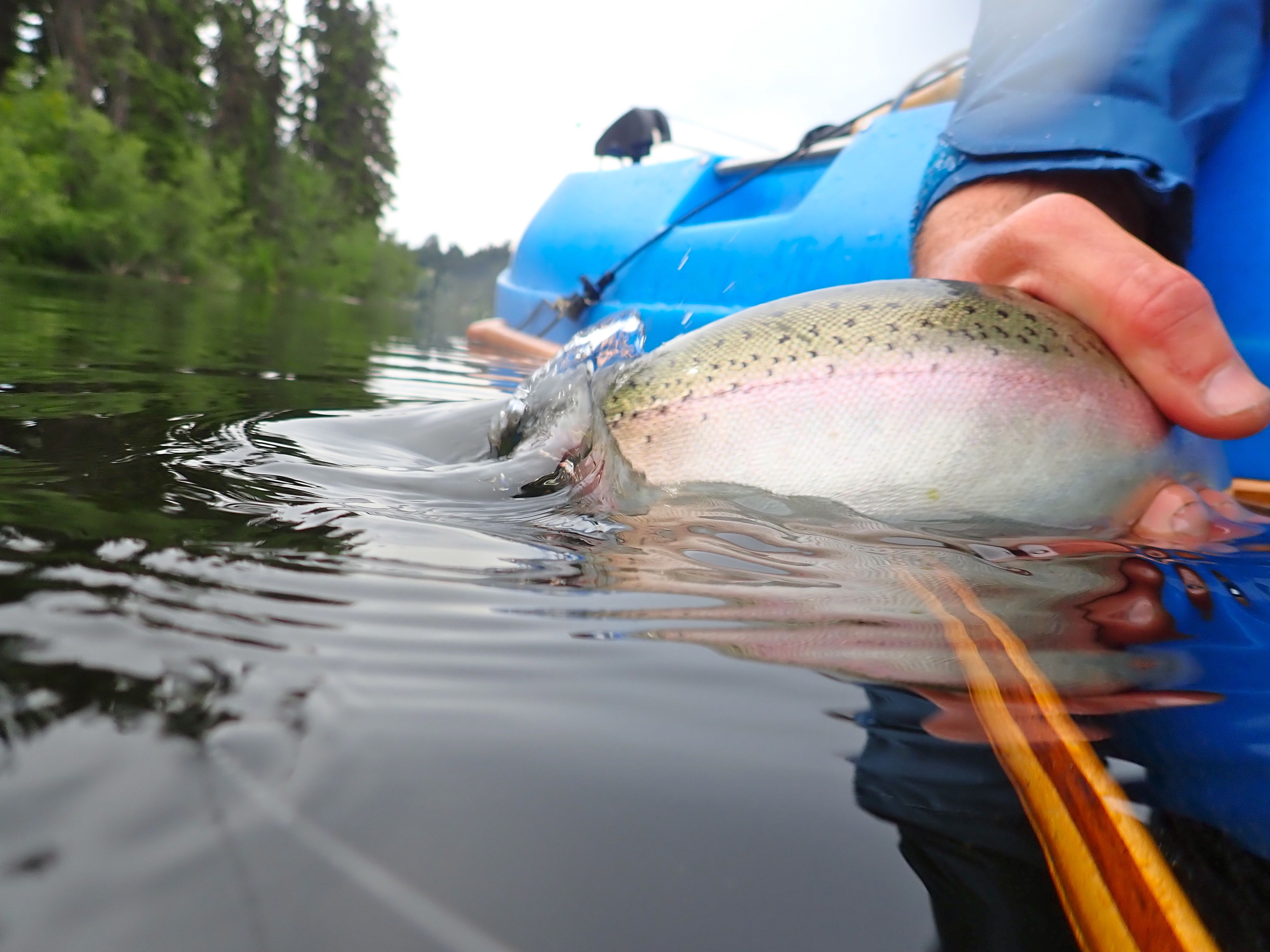 Lakes
Water temps are getting on the warm side and most of our lowland trout lakes are turning off for the summer until the water cools down in the fall. Trout are more comfortable in deeper, cooler water below the thermocline but if you have to bring them through the warm top layer getting them to net, they often don’t recover well or at all during the release so it’s best to wait till they begin cooling off toward fall. Good lake options at this time of year are to fish for bass and panfish, which naturally have a warmer water temperature tolerance or head higher in the hills, be it to a favorite alpine lake where the snow is just melting off or some of the higher elevation lakes in the BC interior. Ross Lake opened on July 1st and while Brandon and I won’t get up there for another few weeks, we’ve had several reports of decent fishing with rainbows in the 16-22″ range. Type 6 full sinking lines and various shiner patterns are the name of the game on Ross, with the Oliver Zonker, Ross Lake Shiner and Olive/White Clousers producing fish. 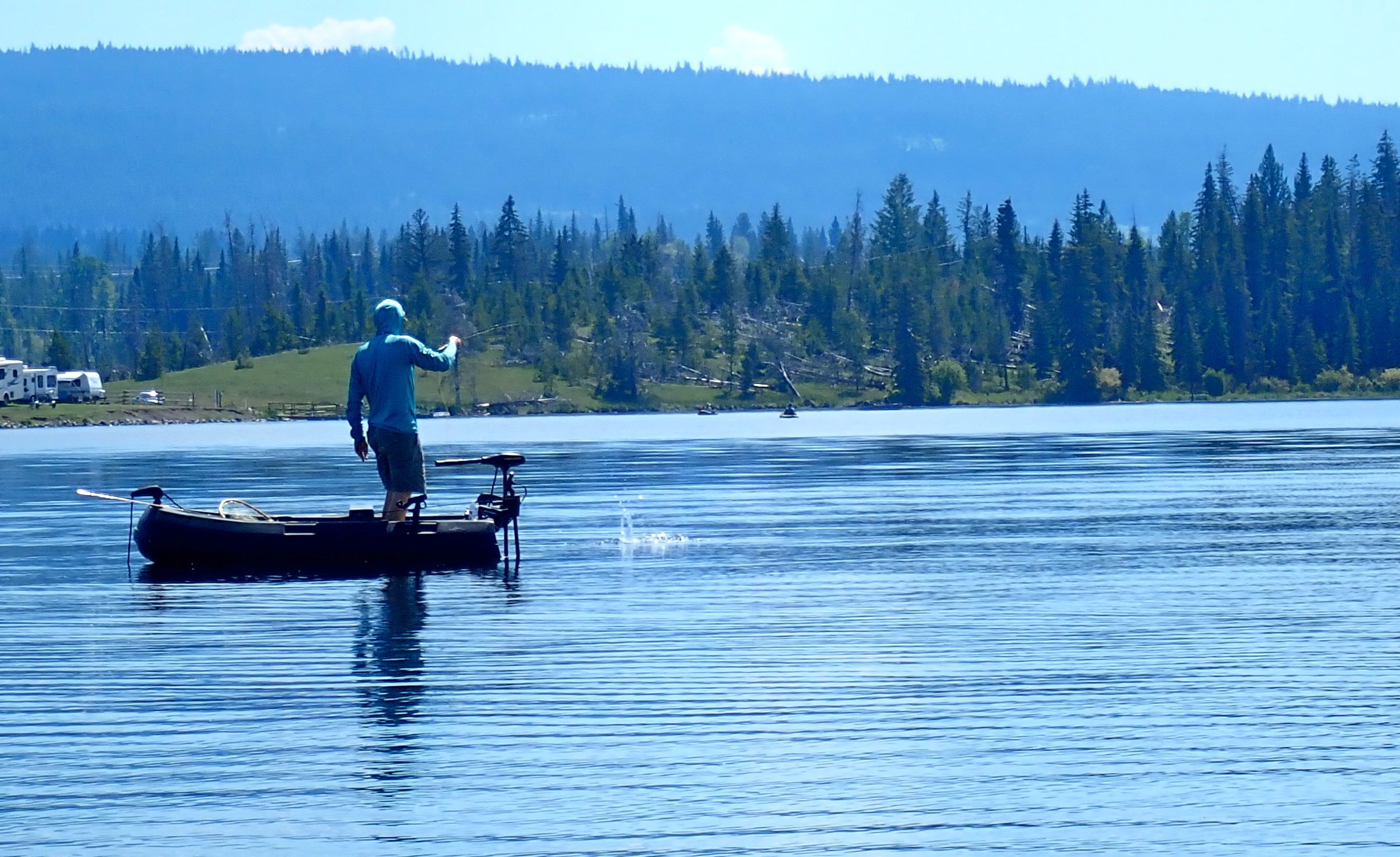 The Hexagenia mayfly hatch is just getting underway on Lake Whatcom. I was out last week and had bugs coming off just before 9pm and into dark. The fish weren’t really on the adults yet, but I picked up several nice bass and a few trout working hex nymph pattern near the bottom in 8′ water. Burk’s Hex Nymph and Saddleback Hex Nymphs are good, and fishing the Parachute Hex Adult, Hex Emerger and Hex Cripple on top are a blast. You never know what kind or size of fish is going to hit these things but it’s simply too big a chunk of protein to be easily ignored. Lake Terrell and Fazon have been continuing to produce bass, with now being prime time to throw top water bugs like Frog Sliders, Swimming Frogs, Oliver Divers, Black Deer Hair Bugs and Fruit Cocktail Hair Bugs along with a variety of hard-bodied poppers. Work these slowly and methodically around weed beds and vegetation. A lot of people fish poppers way too fast and aggressively. Largemouth are notorious for scrutinizing a fly before climbing all over it at the eleventh hour, usually just before you’re about to pick up for your next cast. 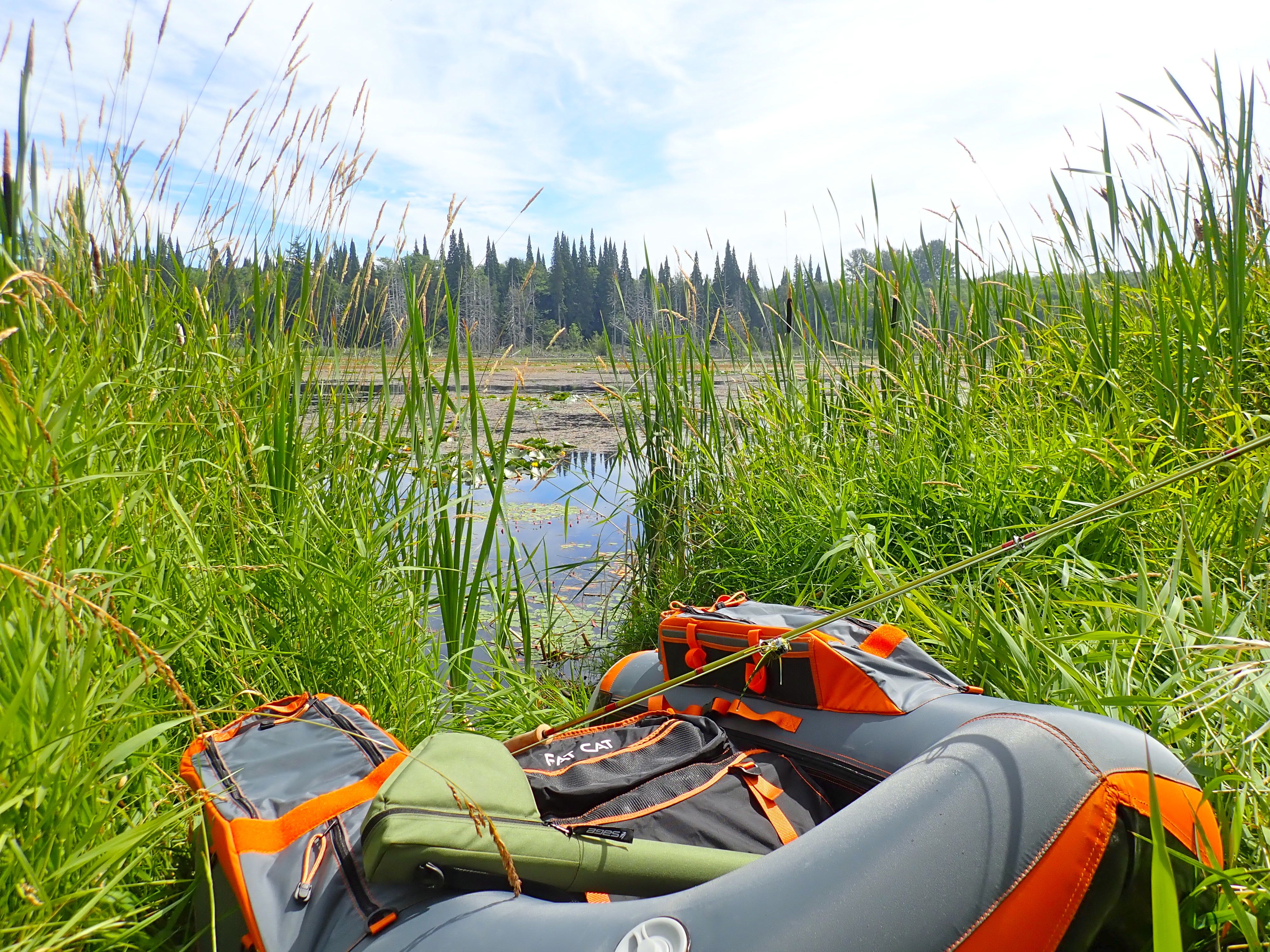 Salt
Sea run cutthroat fishing has been decent around the Sound, with sand lance and small herring being the top forage species this time of year. For flies, Clouser Minnows, Foul Free Herring, Mini Ceivers, Pin Heads and Imitators are great options. The key to summer success on salty cutthroat is finding areas of stronger tidal exchange with some depth or drop offs nearby. The shallow inner bays and flats that can produce well earlier in the year start getting too warm by mid summer and you’ll find more fish in areas where the water remains cooler. We are getting excited to get out beach coho fishing again soon. Marine areas 6 and 7 are currently open for salmon, area 9 opens July 16th and area 8 on August 1st. As always, check the WDFW website for any emergency changes to the regs prior to heading out or download the new WDFW fishing app to stay on top of things. Craft Fur Clousers and Stinger Clousers are some of our beach saltwater salmon favorites. Some years it’s green, some years pink or a combo of the two. Not a bad idea to have both. The Psychedelic Herring and Imitator work quite well too. If you’ve been wanting to get into saltwater beach fly fishing, we have a lot more opportunity this summer than we’ve had the previous couple of years so now’s the time to start! 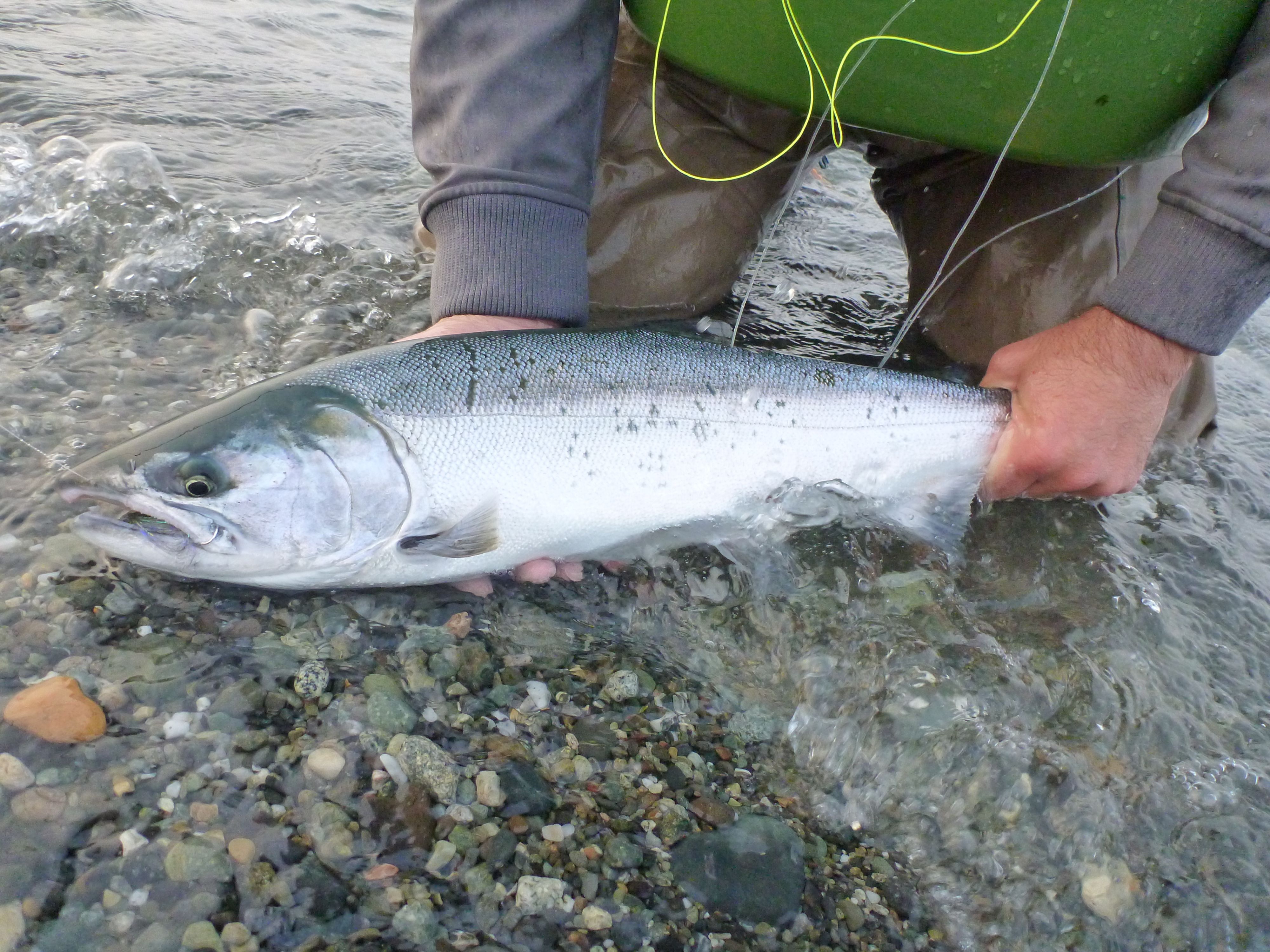