It’s been a perpetual scorcher over the last few weeks with few signs of abating and I feel a bit like bacon sizzling in a cast iron skillet. Being on or in the water as much as is humanly possible has been one of few saving graces so far in the hottest June/July I can remember, and I’ve lived in Western Washington all my life.

I just returned from a week in Wyoming and you bet it was hot there too. Albeit a dryer heat than what we typically experience in Pugetropolis, but mid 90’s and camped in the cooking sun at 7800 feet and you begin to feel a bit dusty to say the least. I fished the headwaters of the Snake mostly with a couple of old college buddies and we had a grand old time. Night-time temperatures dropped into the 40’s each day, which proved to be the salvation for the fishing and the fish. The cutthroat were active from first light until around noon, feeding aggressively in the cozy 60 degree water. By mid-day, the thermometer jumped to 70 degrees in parts of the river and the fishing effectively ended. It was time to play guitar in the shade while sipping a cold cerveza, scrub away the grime and BO in nearby Sheffield Creek, or look for colder, higher gradient water where fish would feed comfortably and survive the stress of being caught. Seems like it happens earlier every summer these days, but we’re already seeing rivers shut down or adopt hoot owl restrictions across the west. 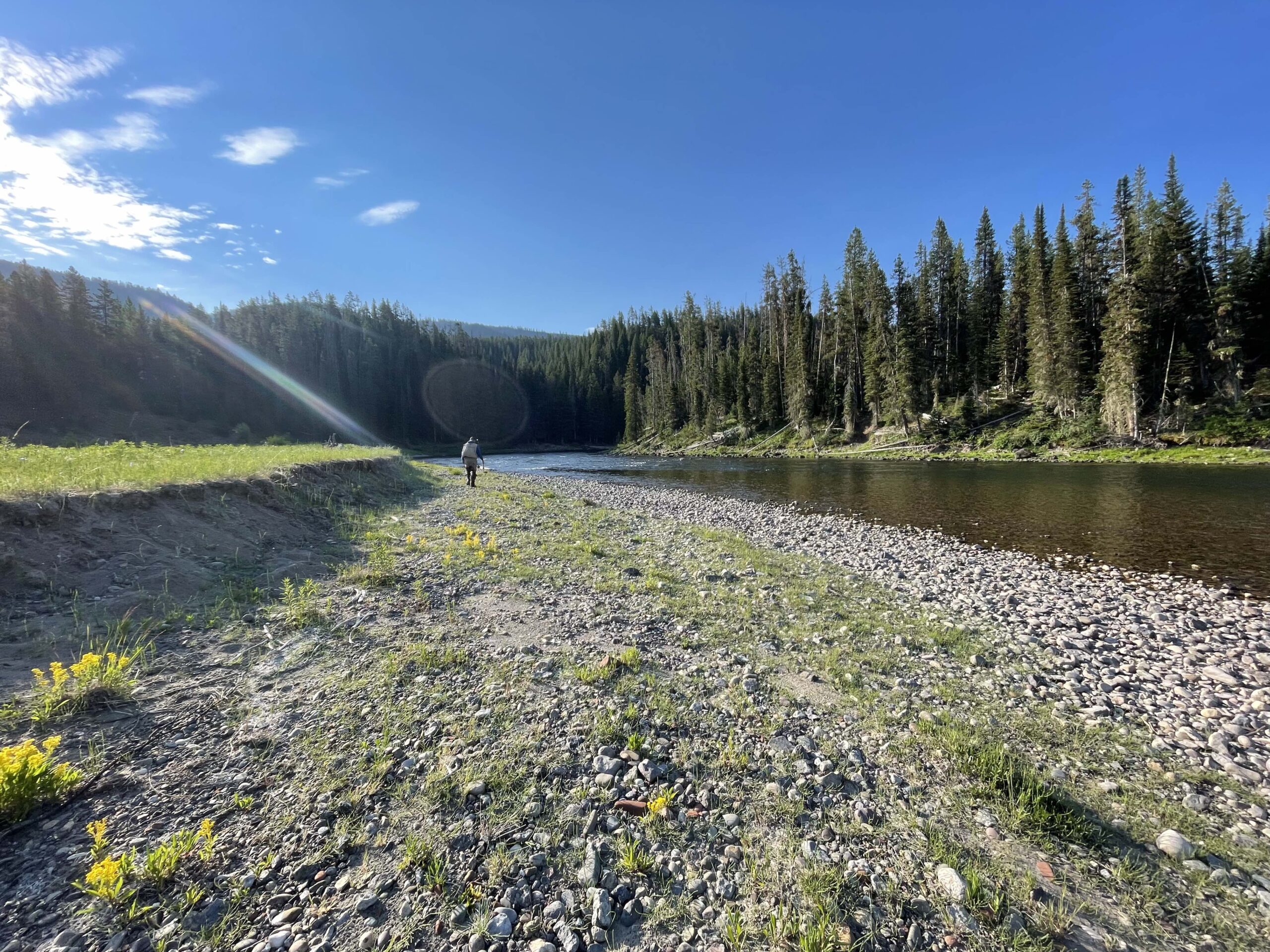 ﻿Our North Sound rivers are a bit more hospitable from a temperature standpoint than in much of the Northwest, being blessed with a good snowpack and in some cases, cold glacial influence, but we’re heading in the same direction as everywhere else. If you don’t already, it’s time to carry a stream thermometer with you when you head out to fish. We sell them at the shop if you need one. When the water temps hit the upper 60’s it’s time to give the trout a break, whether fishing stillwater, a river or even areas of the Puget Sound and Hood Canal. Early mornings are often your best shot at finding suitable water temps in the lowlands, or hitting the high country where stuff may have just recently thawed out. You can shift your focus to bass, panfish or carp…they dig those bathwater temps far more than our salmonids. Whatever the case, at the risk of sounding preachy, we all need to fish responsibly these days.

Proselytizing aside, we do have some exciting fisheries to look forward to this summer. The pink salmon forecast for the Skagit looks really good and we’re on track to have a fishery this year. WDFW published the 2021-2022 fishing regulations this month. They aren’t available in printed form just yet, but you can peruse them online and see what’s in store for your favorite waters. Addison, Brandon and I are busily cranking out pink salmon flies for the shop so you can load up in August and September. Westside Whidbey coho in August and September is another fishery we get pretty jazzed about. Fingers crossed that it’s more productive than last year off the beach, but with just shy of a million pink salmon forecast for the Skagit alone, we should have something out there to catch anyhow.

We’re still working feverishly to keep the shop well stocked in the midst of pandemic era supply and shipping slowdowns. For the most part we’re in pretty good shape. If you’re in the market for waders or wading boots, I’d act sooner rather than later or be prepared to give some lead time as these items have been particularly hard to come by. Speaking of the pandemic, our policy remains that you don’t have to wear a mask if you’re vaccinated when you come to the shop and it’s really refreshing to see people’s entire faces again.

Our spey nights continue to fill entirely each session and we’re going to keep attendance to 6 people maximum. We have some space on July 28th and for the remaining sessions in August and September as well. If you want to learn to spey cast or up your two-handed game, there’s no time like the present. Lock in your spot now.

In the meantime, cool off on the water, explore that mountain creek you’ve always wondered about, catch a big bass on a popper or get your humpy flies all tied by the icy breeze of a box fan. We look forward to seeing you in the shop or on the water. 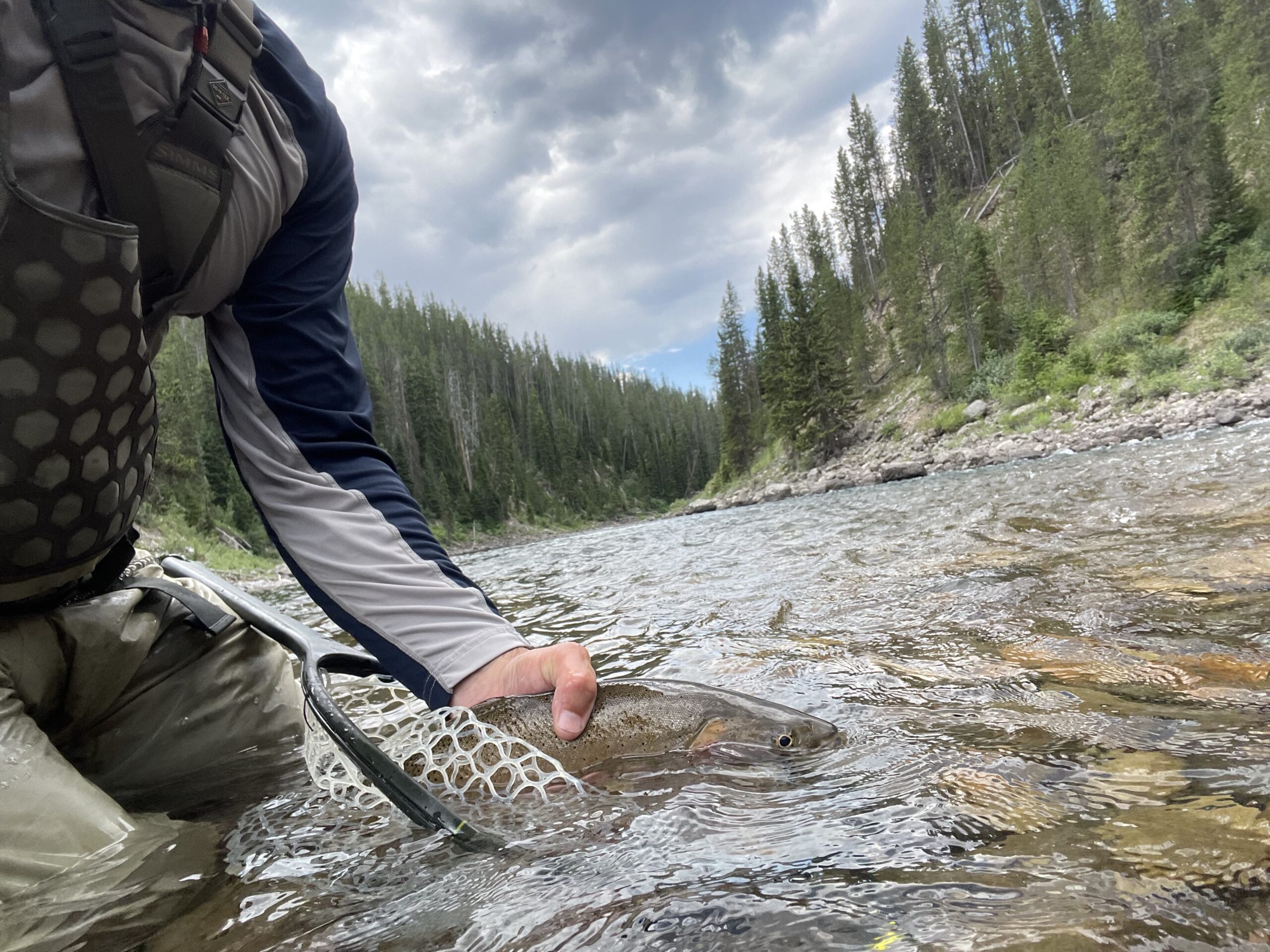 Rivers
With all but the higher elevation lakes getting a little too toasty for safe trout fishing, it’s largely a river show until fall. Rivers and creeks are dropping daily and it appears that much of the snow has melted off and most things are coming into the shape. On the eastside, the Methow and tributaries are very wadeable, though Hwy 20 is closed indefinitely just west of Mazama due to fire activity. If you go the long way, fish early in the day and you’ll find yellow sally stoneflies, a few golden stones, PMD’s and lots of caddis. Remember what suckers cutthroat are for a big foamy dry, so don’t skimp on the Chubbys, Fuzzy Wuzzys, Foamulators and such. We just got several hundred dozen summer fly staples reloaded in the bins, so the Confluence is well stocked on flies for your next adventure. 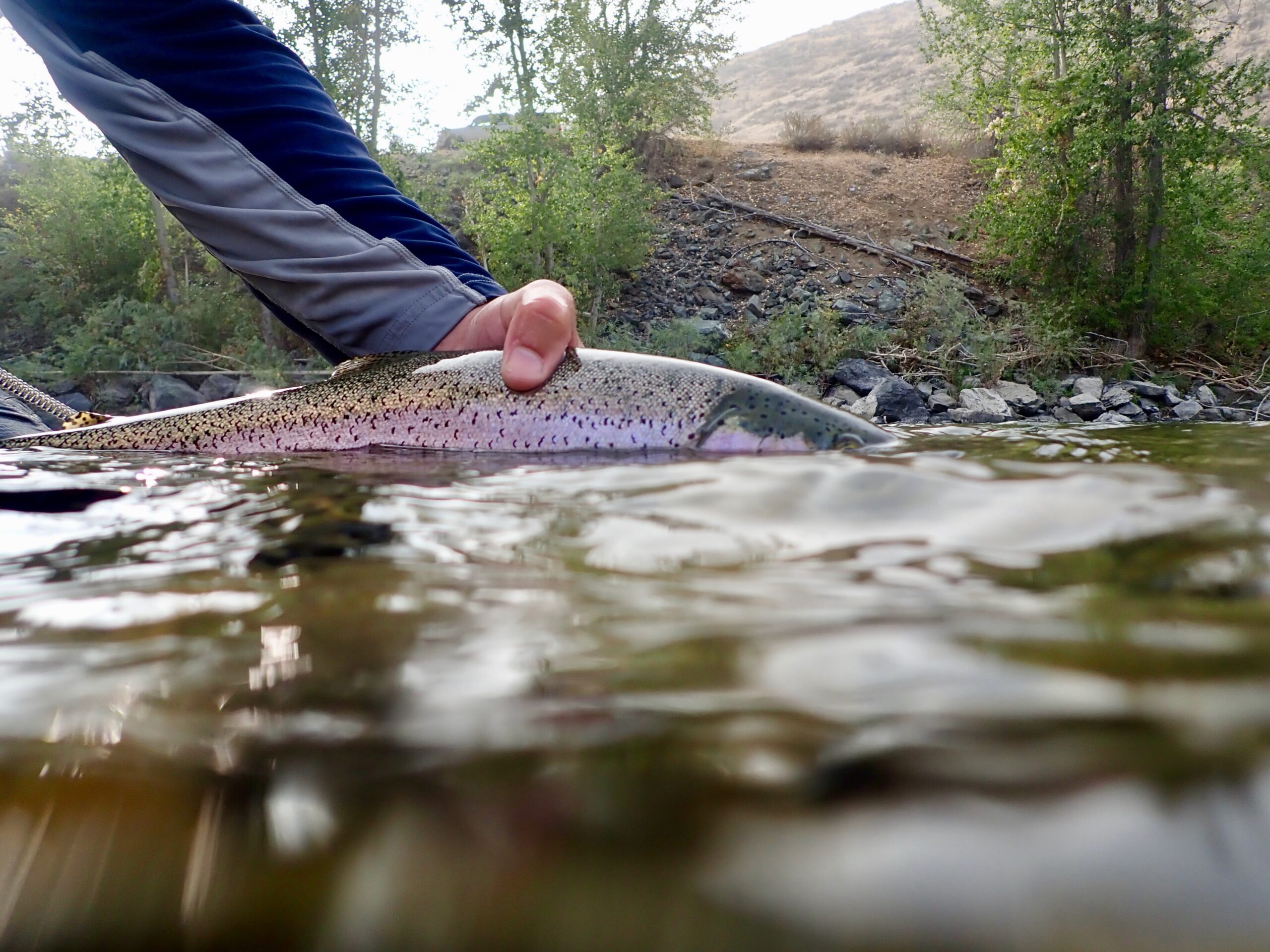 Westside creeks are now in fishable shape, with some still slightly high, but clear and headed in the right direction. Grab your attractor dries, Humpies, Royal Wulffs and Stimulators for some small but feisty trout. This is the time of year where we will really try to sell you on a 2 or 3 weight. You can’t necessarily make the fish bigger but you can scale way down to make them pretty fun and sporting on an ultra light fly rod. You wouldn’t believe how much play our 2 and 3 weights get between bluegill and creek trout every year. We added some killer fly patterns like the Grumpy Frumpy and Moodah Poodah to our selection this season too. Both will float like a cork and are perfect for our higher gradient, turbulent little rivulets.

The Skagit above the Sauk has dropped into shape and is ready for action if you’d like to swing streamers for big bull trout and the upper Sauk above the glacial tributaries is getting there too. The usual Dali Llamas, Sculpzillas and meaty streamers swung on a trout spey or single hander with a Commando Head will work, just keep covering water. The fish tend to be really spread out up there this time of year. 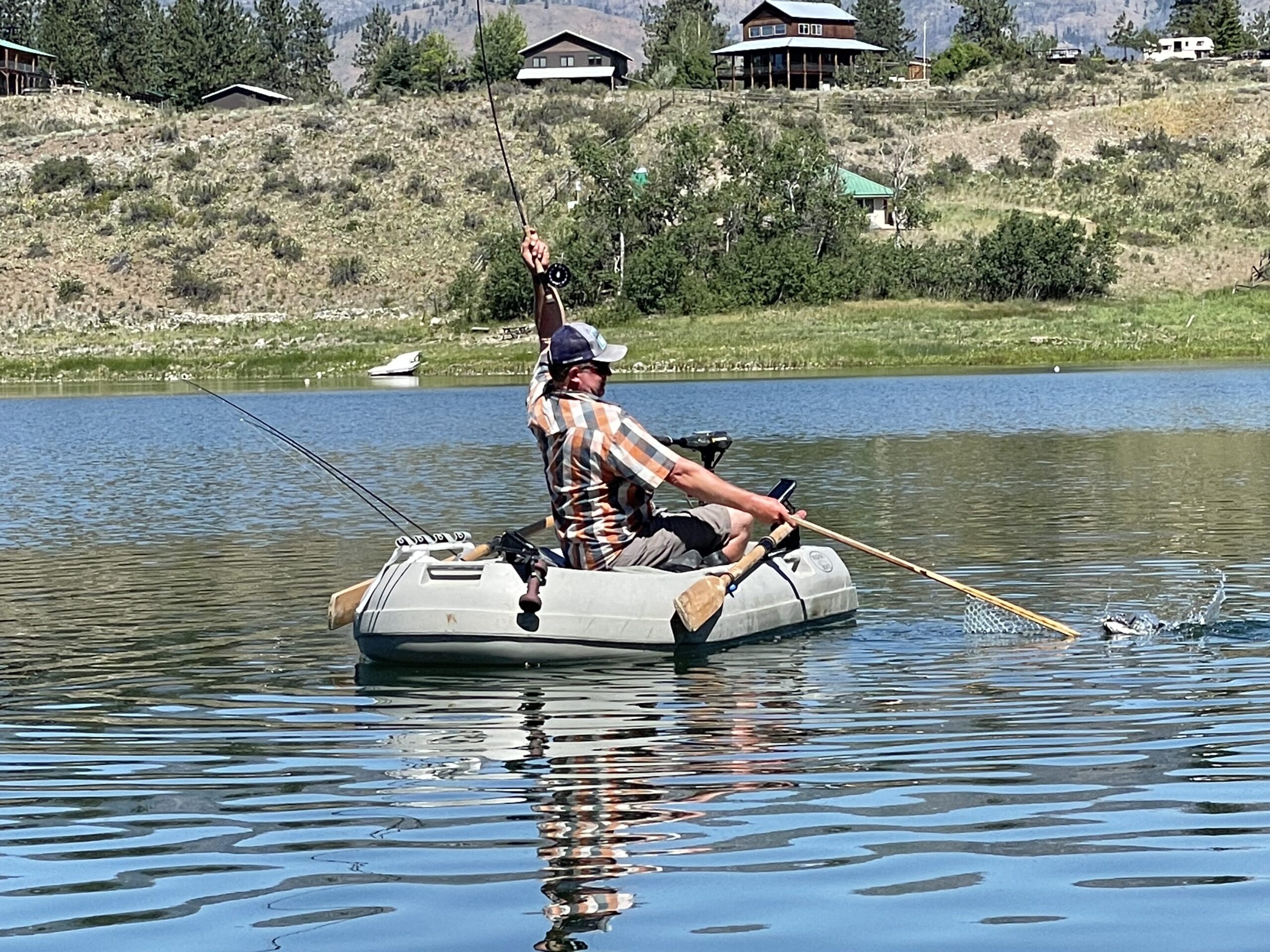 Lakes
Alpine lakes are now becoming accessible for the short but productive season. Black gnats, Elk Hair Caddis, Griffiths Gnats, Mosquitos and Parachute Adams work on the surface with small Woolly Buggers, Hare’s Ears, Soft Hackles and Zug Bugs being good subsurface options. Ross Lake opened July 1st and generally fishes well throughout the month and into the fall using full sink lines and redside shiner patterns. With the BC border still closed, your only boat access is through the Ross Lake Resort, so be sure to call ahead to try and reserve a boat rental.

Our lowland trout lakes like Pass and Squalicum are too warm to fish until things cool down in fall. Sure, the trout can seek cooler water refuge when there is sufficient depth, but if the surface temps are in the 70’s and oxygen poor, trout are slow to revive and mortality is potentially much higher. Our warmwater species like bass and bluegill, however, thrive in our summer lowland lake conditions. That magical last few hours of the day, when the light begins to fade and the shadows creep farther and farther out from the lake’s edge have been positively incredible over the last few weeks. 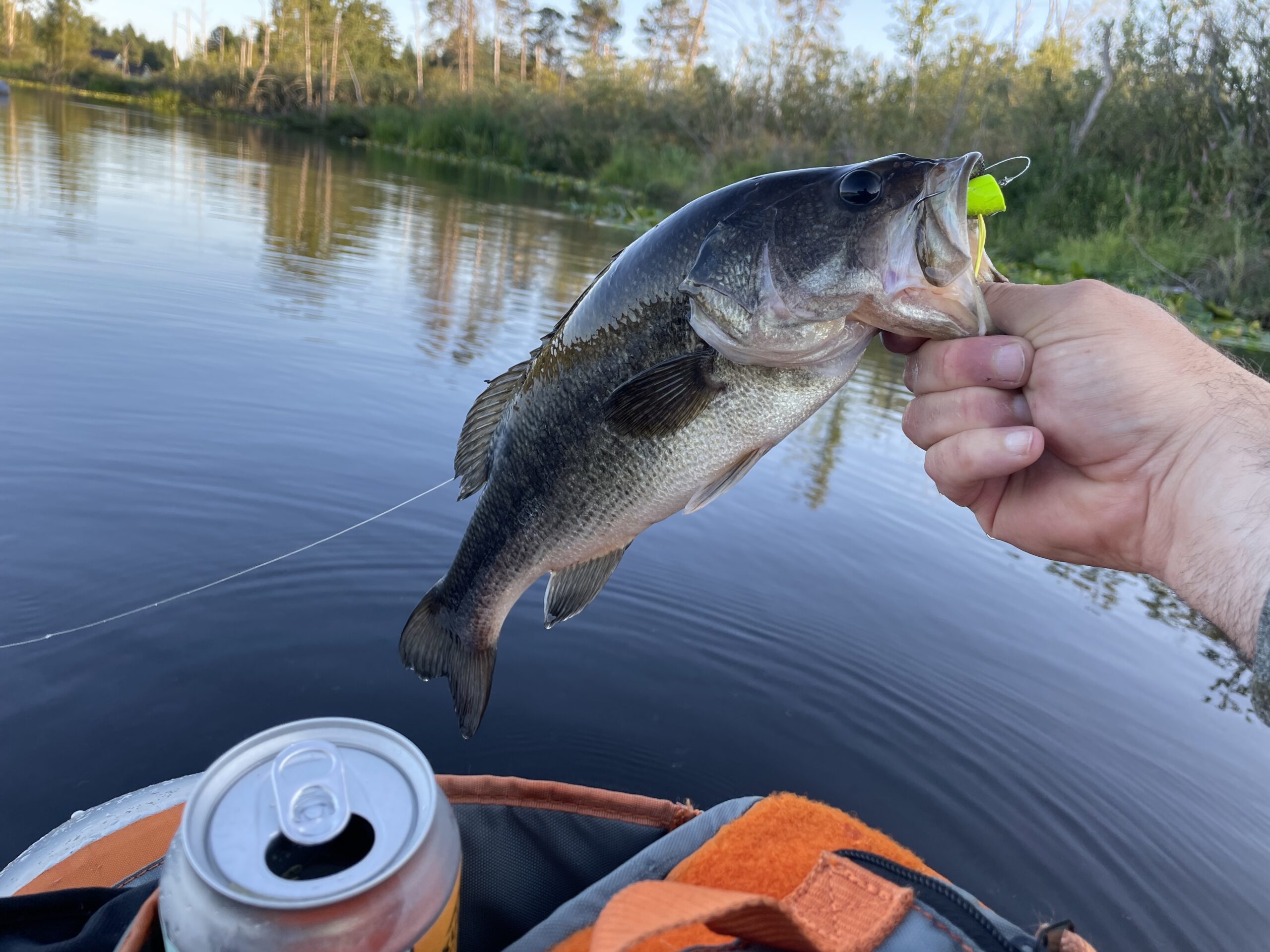 Bluegill Gurglers, Bream Poppers, Madam X’s and virtually any small, bushy dry fly have been lights out for bluegill and the largemouth bass topwater bite. has been stellar to boot. Fish big noisy hair poppers, hard bodied poppers, mouse and frogs patterns just before dark and watch the fireworks begin. Lake Whatcom smallies are starting to pick up after the spawn as well. Crayfish patterns worked on the bottom under bright light and then baitfish patterns like Clousers, Zonkers and Zoo Cougars fished higher in the water column as the sun sits lower on the horizon. We’re starting to see Hexagenia mayflies take flight on Whatcom as well. Bring your headlamp and be prepared to fish till dark. The Hex hatches typically lasts through July and into mid-August and is a ton of fun to fish. 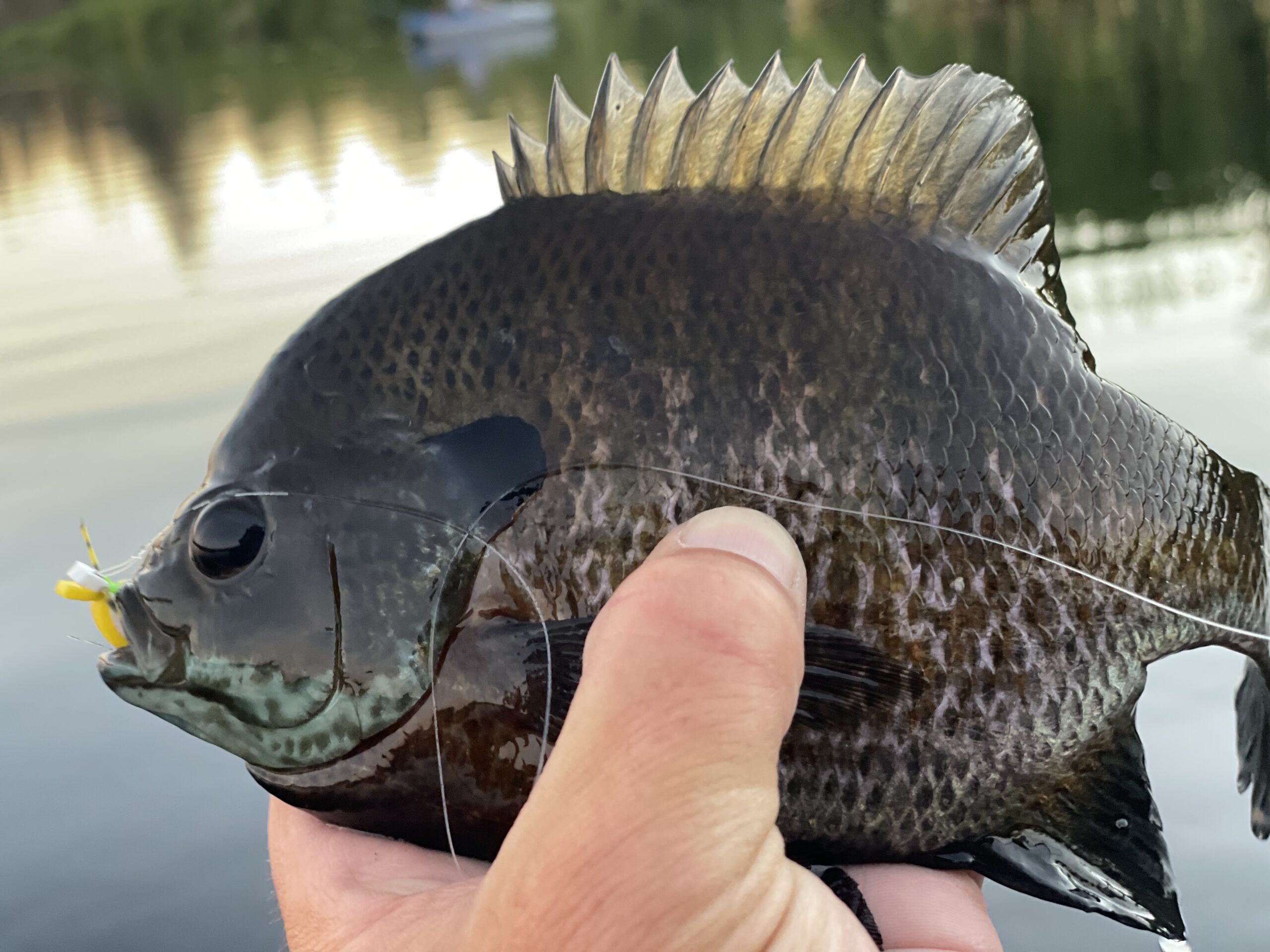 Beaches
There’s some cutthroat around east Whidbey and Camano, but it’s been tougher with the long, hot bright days. Early morning and late evening tides offer the best opportunity. We typically start seeing the first pink salmon showing around Admiralty Bay in late July or early August so have your small pink Clousers ready at the helm. 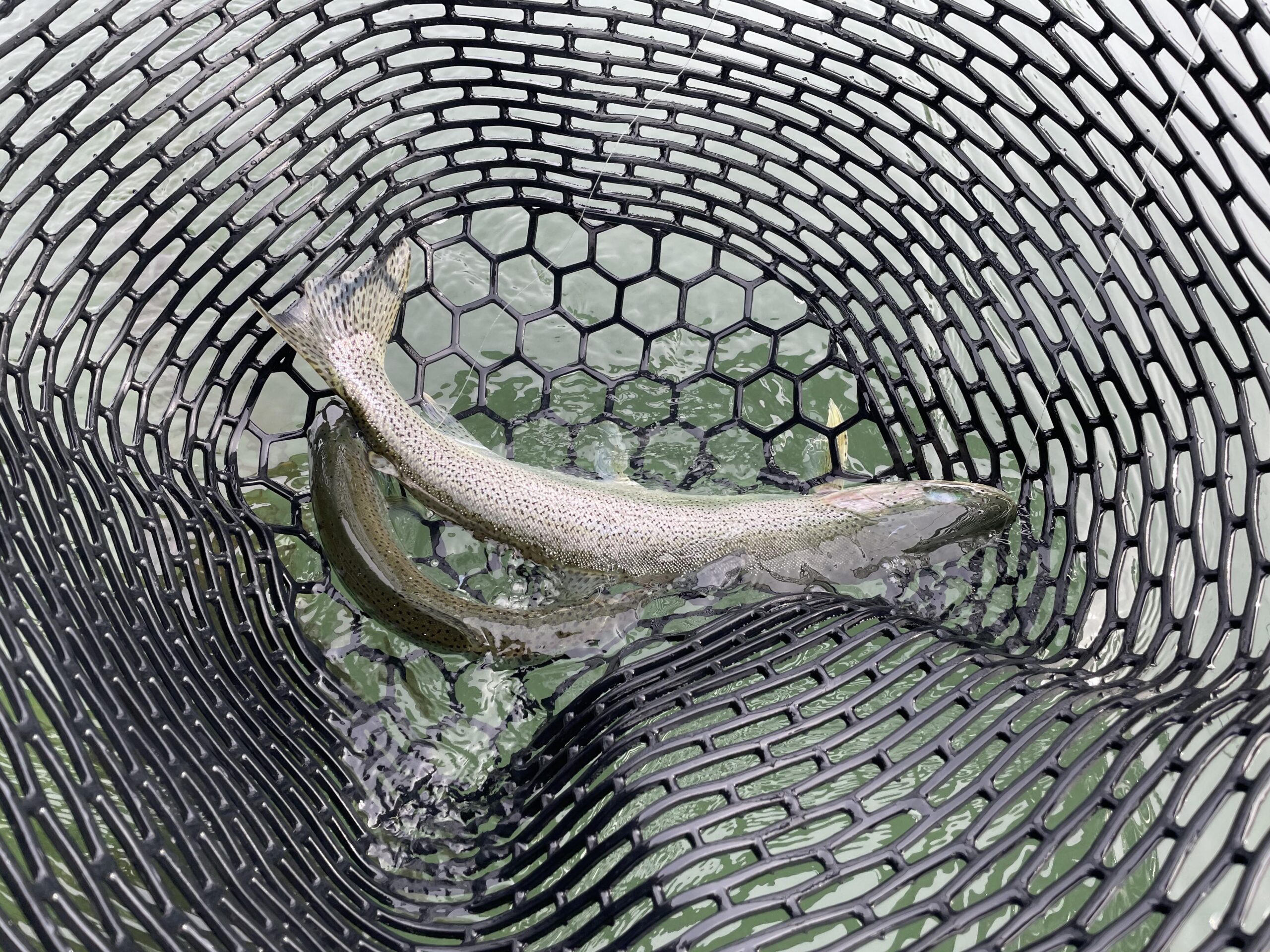