After an odd start to the year, the seasons finally seem to be aligning a little more closely with the calendar. As a native Washingtonian, I’m pretty accustomed to summer not truly beginning until the 4th of July most years anyway. We’ve been fortunate to enjoy a fine stretch of decent weather lately and with it, long hours of daylight and some really good fishing. If you’re a trout person, the cooler spring has extended the productive lowland lake fishing period out a few extra weeks while the high country snows continue to melt and open up more water access in the mountains. If you’re bass and panfish connoisseur, it’s been off the hook lately and should continue well into the summer. If you’re most at home on a river or stream, well, we’re getting there but there’s still quite a bit of water flowing out of the hills so most watersheds that drain from high elevation are running big and fast. Be careful out there. We expect to see river levels beginning to drop as we get further into the month. There’s still a ton of snow up in the mountains!

I’m pleased to have made it through another 4th of July with all of my digits intact. I’ve always had a penchant for firecrackers but have toned it down considerably over the years as being able to fish and tie flies remains a chief priority in life. With gas prices still high, it’s no surprise that people seem less and less eager to travel afar. Don’t forget that we’ve got some stellar fishing options relatively close to home this time of year, so don’t be afraid to get out and do some exploring in your own backyard. Take a buddy while you’re at it. You can split the fuel costs and enjoy some shared time on the water with a bonus break for your pocket book.

Inventory remains really good at the shop. We are the best stocked we’ve been since the pandemic began, with more products coming in this month. We have a big shipment of float tubes expected to arrive next week so let us know if you’re in the market and get one while they’re available. We also have a few open spaces for our July 20th Spey Night if you’re interested in a free chance to learn to spey cast or just want to brush up your skills. Let us know ASAP. Otherwise have a safe and fun-filled July on the water and best of fishing to you! 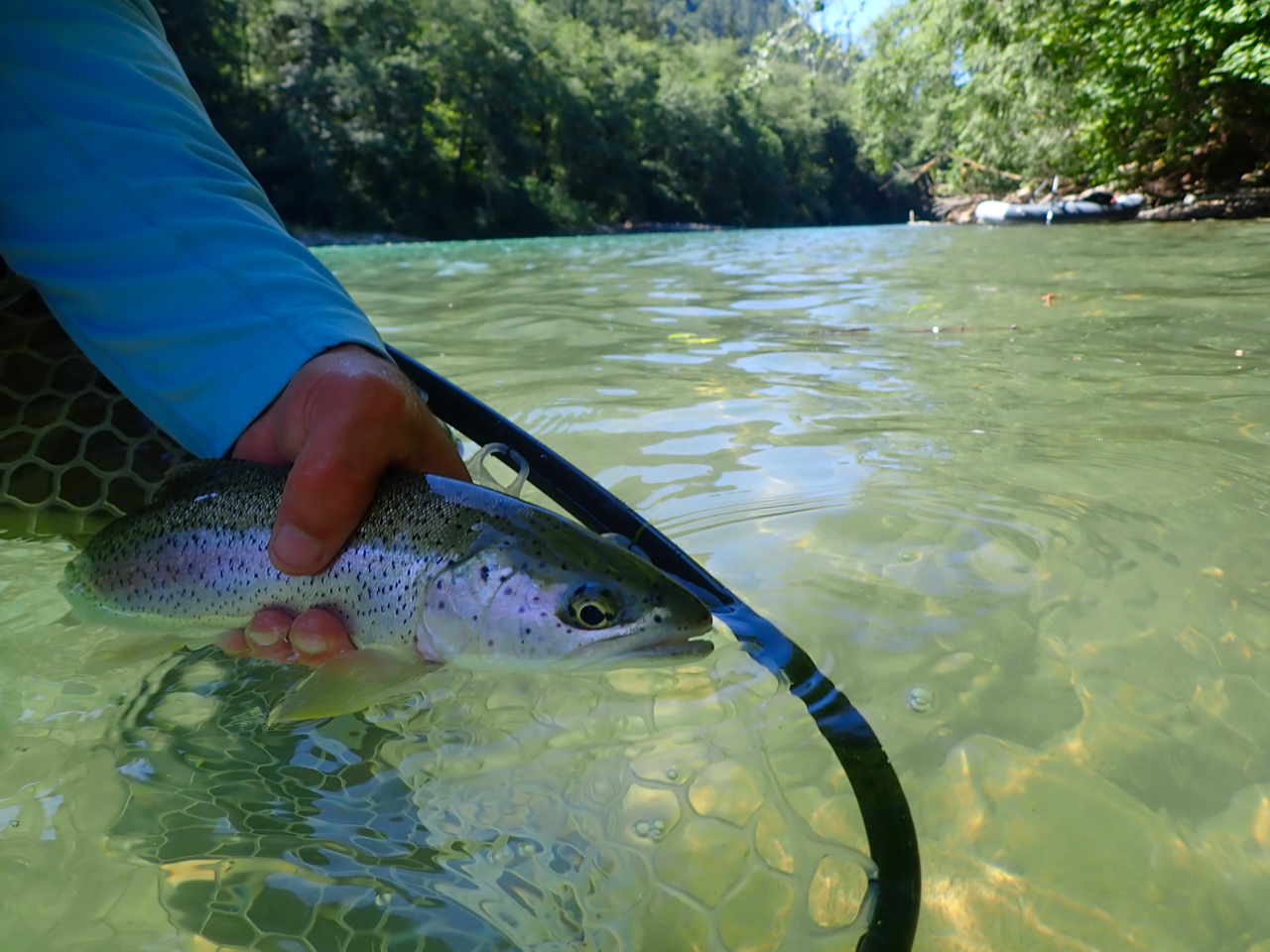 Rivers
It’s a waiting game at the moment for many of our rivers to return to fishable flows. The warmer summer days and massive snow pack this year in the mountains have most of them running fairly high at the moment. Between dam releases and swollen tributaries, even the Skagit above the Sauk is averaging around 15,000 CFS. That’s really ripping, even for the most optimistic of anglers. The Methow has been hovering close to 3000 CFS lately. That’s floatable and fishable but challenging for the walk and wade angler. 1500 CFS and lower is closer to optimal. The Chewuch is getting close to the fishable and many of the lower elevation streams like Whatcom Creek and the Samish are just fine in terms of water levels. In another couple of weeks I’d expect river and stream fishing options to increase tenfold.

As for bugs, expect to find lots of yellow sally stoneflies on most flows, plenty of caddis, some PMD mayflies and even the occasional Golden Stonefly. In the higher waters of the Methow, streamer fishing is your top bet, but when the bugs are out and about, Purple Haze, Parachute Adams and Slickwater Caddis will catch fish if they’re looking up. Later in July, start tossing Foamulators, Chubby’s, Gypsy Kings and other big foam dries with a Lightning Bug, Copper John, or Rainbow Warrior dropper.

Closer to home, the Skagit above the Sauk hosts a great bull trout fishery using Sculpzillas, Dali Llamas and big white flashy streamers. Look for flows <10,000 CFS and even less is better. 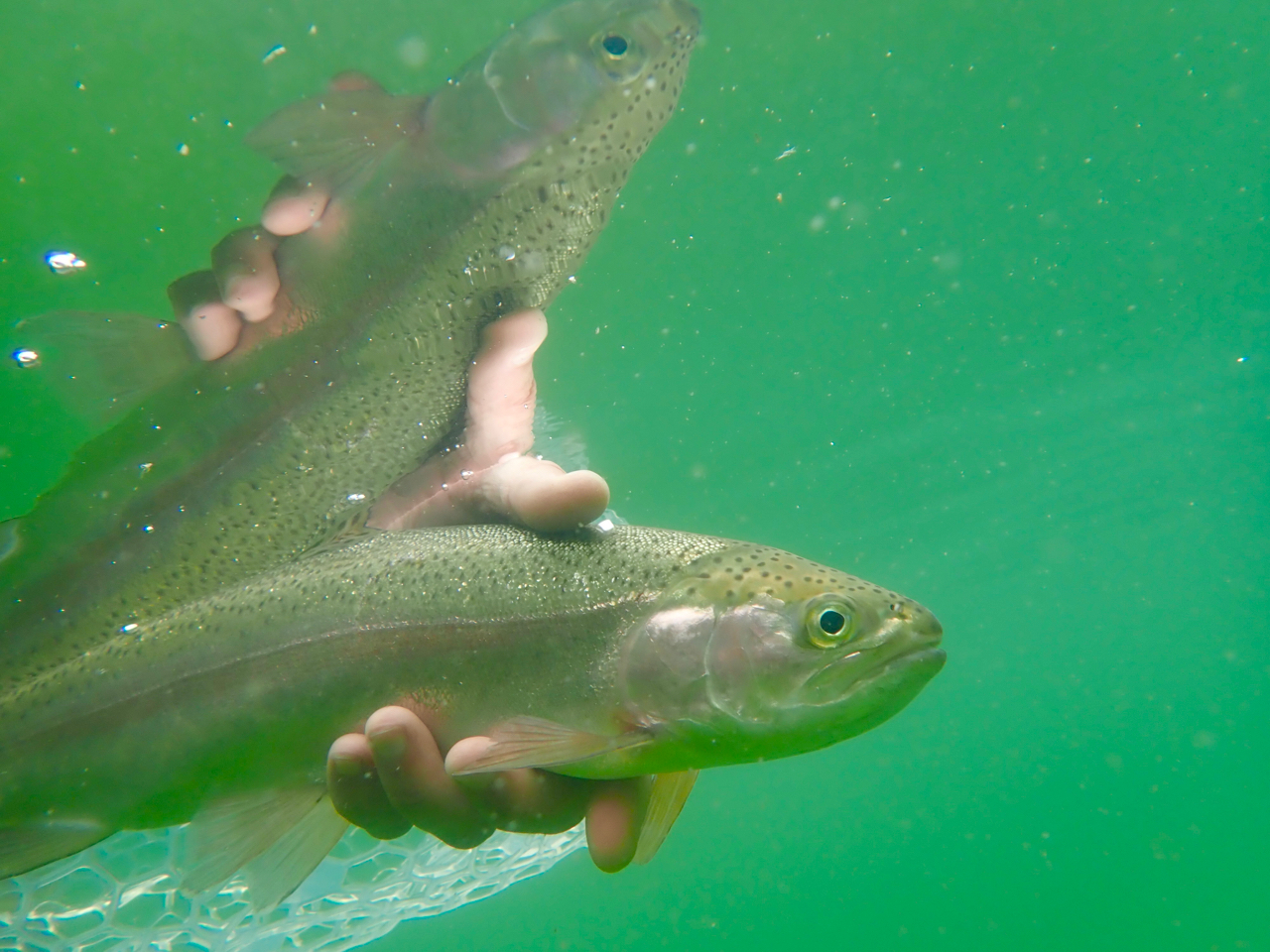 Lakes
While the sun has thankfully become a more consistent presence in our daily lives, it’s far from scorching hot out there, with the exception of that mini heat wave at the end of June. The cooler temps have kept many lakes fishing longer into the summer than usual. Remember, trout thrive in cold water. If you’re targetting trout the temperature cutoff is around 65 degrees fahrenheit. Even above 60, really take special care to land fish quickly and revive them fully to better their survival chances if you’re planning to release them. As summer unfolds, seek out lakes at higher elevations where you can expect to find cooler water. Chironomids will still be hatching throughout the day, though more sporadically than earlier in the spring. Small dark caddis abound in the evenings and damsels and dragonflies (both nymphs and adults) are a much sought after meal for trout this time of year. Of course Woolly Buggers, Hale Bopps and other general leech imitations continue to produce fish too.

One of our favorite pastimes this time of year to pursue bass and panfish with a fly rod in the local lakes and ponds dotted across Whatcom, Skagit and Island Counties. A peaceful evening filled with little else than the sounds of bullfrogs and the occasional big largemouth exploding on a topwater popper is hard to beat. Check out this article on Whatcom bass and panfish I wrote a few years ago. It’ll help point you in the right direction if you’re new to this fishery. The best part is that bass fishing spans the entire summer and most of us live within 10 miles of a lake with bass and panfish. We are loaded up with a huge selection of bass poppers and divers for your next evening adventure. July typically marks the beginning of the hexagenia mayfly hatch on Lake Whatcom. These giant yellow mayflies hatch late in the evening over hard compact clay/silt flats throughout the lake and both smallmouth bass and cutthroat trout will be on the lookout for them. The hexes also hatch at Lake Padden, though to a lesser extent. 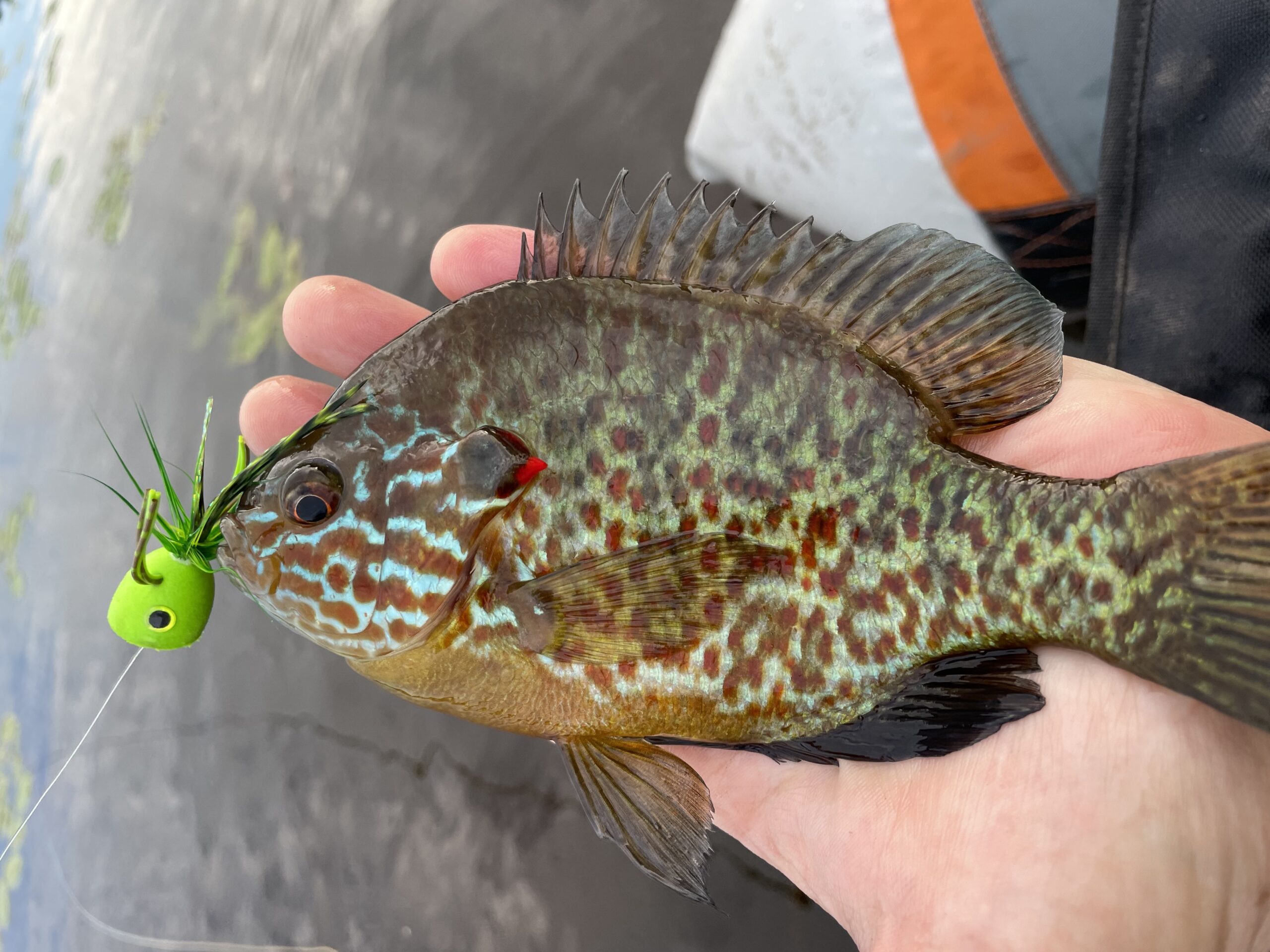 Beaches
Cutthroat are out and about in the North Sound saltwater. The east side of Whidbey and Camano Islands as well as all along Chuckanut Bay from Fairhaven south to Samish Island are frequented by summer cutthroat. Pinheads, Imitators and small Clousers work well this time of year. We’re already looking forward to casting for coho salmon off the west Whidbey Beaches next month. Get your Craft Fur Clousers tied!