June’s North Sound fly fishing report comes to you courtesy of the sun, whose lingering presence has bestowed a great number of overwhelmingly pleasant fishing opportunities on us. From baking afternoons pitching top water bugs for bass and bluegill, swinging gurglers for ravenous cutthroat on a peaceful Puget Sound beach to chasing big trout under the clear desert skies of Eastern Washington, there’s a little something out there for anyone interested and it’s downright tough to beat an afternoon on the water with a full beer and an empty mind. It’s easy to forget just how nice our late spring and summer Washington weather can be when we’re enduring the dirge of the other nine damp months, but it’s as good as it gets out there and there are few reasons not to do your best to go fishing. Local rivers are open now if you’ve been biting your nails to get a shot at moving water anywhere close to home. If you still remember a few months back when it was remarkably cold and snowy, all that frozen stuff is liquefying in the heat before our very eyes and we have a lot of water coursing through most systems. We’re continuing another summer of spey Wednesdays every other Wednesday through early September. It’s a great opportunity to up your two handed casting game and try out some of the new rods in our demo line up. We have some other exciting events coming down the pike as well. Thanks to all who showed up for our anniversary BBQ last month and thanks to Frank Koterba and volunteers with the Fourth Corner Fly Club along with Erik Johnson from Anglers Rendezvous, Larry Shoenmaker with Dogfish Boats and Clint Avery for playing a huge part in making it happen. We’re confident everyone walked away well fed with a kiss of sunshine on their cheeks. We wouldn’t be here without all of your support. Now get fishing! 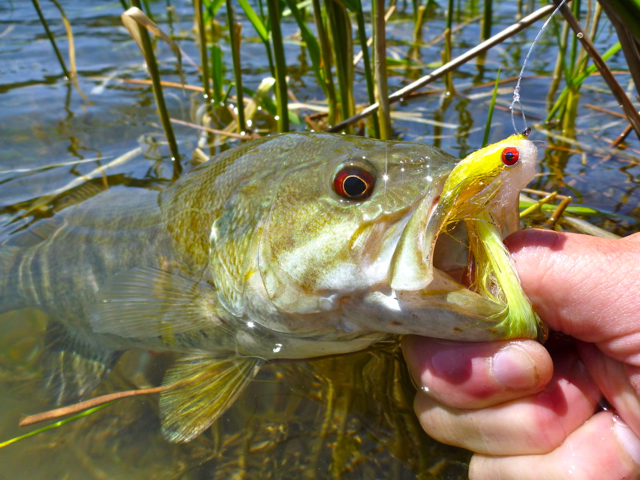 Lakes
Our extended warm weather has been having mixed effects on our local fisheries. The bass and spiny ray action has been absolutely amazing on Fazon, Terrell and Whatcom to name a few, while the lowland lake trout fishing is slowing down for some. Several lakes have stratified with the heat, so you’ll want to fish early and late for cooler surface temps where trout are more comfortable or break out the full sinking lines to keep your flies below the thermocline. Much of our lowland lake fishing quiets down by the end of the month and really it’s a good time to give our cold water lake fisheries a break to help keep trout from going belly up in the heat. Mid and higher elevation lakes are a better choice further into the summer, from the high desert lakes of North Central Washington like Chopaka to the interior plateau lakes of BC. We are probably at least another month, if not two away from being able to enjoy our alpine lake fisheries. I just returned from a trip to eastern Washington and the sheer amount of snow in the North Cascades is pretty significant. Wherever you end up, we’re still seeing Callibaetis mayflies in the higher elevation lakes, some continued chironomid activity, a strong damsel emergence along with some dragonfly activity and some evening caddis on most lakes. Productive patterns have been Two-Tone Marabou Damsels, Dainty Damsels, #16-18 Bright Green Chironomids, #14 Dark Brown Ice Cream Cones, Gomphus patterns, Adult Damsels, #14 Callibaetis Cripples, #18-20 CDC Midge Emergers and a variety of leech patterns, with the Conehead Ruby Eyed Leech and Bruised Balance Leech being some of our favorites. We’re picking up fish using both floating line and floating line indicator tactics as well as with full sinking lines. Ross Lake will open July 1st, hopefully providing yet another summer of pursuing big shiner-eating wild rainbows in the serenity of the Cascades. 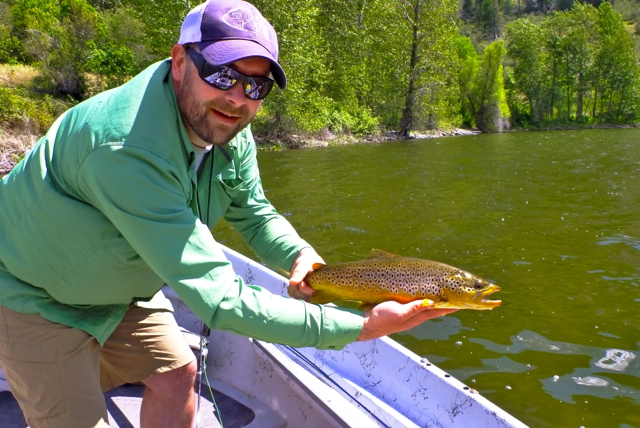 For bluegill, we’ve had continued success fishing the mini Bream Poppers in an assortment of colors along with our Bluegill Gurgler on top. On those days when they’re less inclined to come to the surface, damsel nymph patterns, #12 Pheasant Tails, #10 Slight Leeches and smaller Woolly Buggers have produced subsurface. Nathan Sundine’s Woolly Bully has proven deadly on our local panfish, so be sure to tie a few compliments of our June Fly of the Month. Largemouth are fishing well on most lakes where they predominate. During the bright daylight hours, subsurface patterns like the Olive Diver, Bass Turd and Bass Worm are performing well, with Frog, Luna and Fire Tiger Poppers on top producing some nice bass early and late in the day. Lake Whatcom has been outstanding for smallmouth this season. A lot of fish are still on their beds so release them gently if you happen upon a few. Yellow Zonkers, White Zonkers, Zoo Cougars in the same colors, Bass Turds, Jawbreakers, and Beldar Buggers in Lemondrop and Autumn Splendor have all been working. Just focus on the rocky structure and look for shade during the day in the form of docks and overhanging brush. Next month we’ll begin seeing Hexagenia mayflies hatching on Whatcom. While the hatch only lasts an hour or two each night at dusk, it can provide pretty exceptional fishing. We just got some new Hex Nymphs in that ought to be deadly prior to and during the hatch. 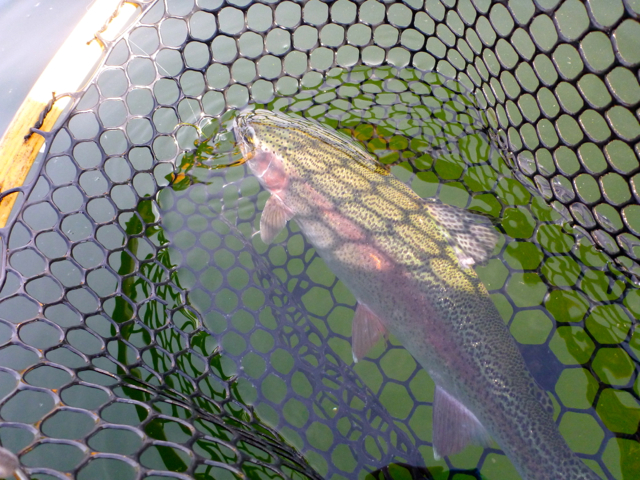 Rivers
While it’s nice to have the opportunity to fish moving water once again, most of our rivers and streams remain pretty swollen from runoff. The Methow last weekend was bank full and chocolaty, all the way to Winthrop and beyond. The visibility on the Skagit above Rockport was decent, but still really high. The Stilly is in pretty good shape if you want to chase summer steelhead and the Nooksack seems to vary from day to day depending on how hot or wet it gets. Many of our higher country streams draining the Cascades will be pretty high and/or off color through this month. Let’s hope to see them drop as we get into July. While they are fewer in number, non snow-fed streams like the Samish and its open tributaries or Whatcom Creek are in decent shape and primed for a few hours on the water. Swinging small Muddlers, Bunny Busters or Wounded Sculpins on a Poly Leader is a good tactic when the flows are up. At lower flows, Elk Hair Caddis, Parachute Adams, Stimulators, Royal Trudes and Humpies will bring fish to the surface. If you want to up your odds, fish a really small Prince, Copper John, Rainbow Warrior or Lightning Bug as a dropper below the dry. If and when the 2017 WDFW Fishing Regs Pamphlet ever comes out (it was due out last week), check your summer river seasons carefully as we’ll have a number of complete closures in the North Sound area. The South Fork Nooksack is now closed from Skookum Creek downstream until September 30th. See the WDFW Emergency Rules for more details. We are all for conserving our weak pink and coho stocks this year, but these across-the-board complete closures are eliminating some of the best river trout and char fisheries in Western Washington in the same breath. If you’re as miffed about the way our rivers are managed as we are, we’re offering 15% off of our one of a kind “WDFW Shirts” for the month of June. 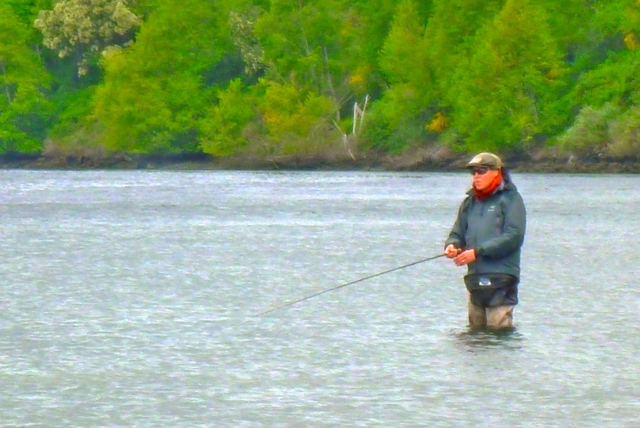 Saltwater
Still a few more days of lingcod fishing in the Sound and they can and are taken on a fly if you’re so inclined. These suckers can really pull and will willingly gobble a pike/musky-sized streamer fished on your fastest possible sinking head. Off the beaches, folks are still picking up a few sea run bull trout around Skagit Bay, though it’s been tougher this year than in years past. Sea run cutthroat fishing around central and southern portions of east Whidbey has been pretty good, as in elsewhere in the Sound. The chum fry have largely moved off to parts unknown, but sculpin, small herring, and sand lance patterns are working, along with the ubiquitous olive or white Conehead Squid. When in doubt, small Clousers in chartreuse/white, olive/white or pink/chartreuse seem to work nearly everywhere. Some of our bays, particularly in the deep south Sound and Hood Canal can get uncomfortably toasty in the summer. Fish the drop offs and deeper water if fishing from a boat or look to areas with some nearby depth and good tidal current if fishing from the beach as the water temps remain cooler in these areas. Our summer pink and coho seasons will fire up next month, and while very heavily restricted this year (look for further detail when the regs are published), it still beats last year’s total lack of opportunity. 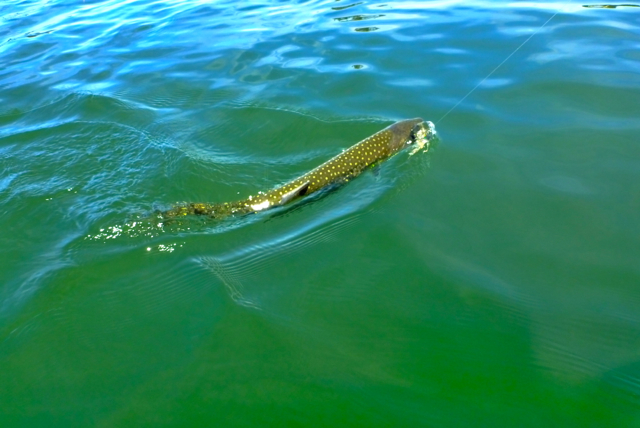