We are almost officially to summer now and the biggest news is that we once again have rivers to fish. With our long days, fishing before or after work is easier than ever, with a ton of fishable options close to home. Want to catch the evening or morning rise on your favorite trout lake? Doable. Want to swing flies for bull trout or summer steelhead? Pretty easy too. Ready to pop some bass bugs back in the reeds as the sun dips into the horizon and the bullfrogs are croaking? Got some great options there as well.

Though we have lots of fisheries throughout the year that we look forward to, it’s pretty tough to beat the number of options we have out there at the moment. The sunshine and semi-consistent weather are a welcome bonus, despite getting somewhat of a mixed bag in conditions over the last several weeks. We all know summer doesn’t officially start until after the 4th of July around these parts anyhow, so a little extra warmth and vitamin D right now is just icing on the cake. Speaking of the 4th, we’ll be closed for the day of July 4th to celebrate the Independence Day, which will hopefully include a little fishing.

Our Spey Wednesdays have kicked off for another season, with our continued goal of making two-handed casting both fun and accessible to anyone wanting to learn every other Wednesday at Nugents Corner. It’s just too good a time to pass up and a pretty efficient way to cover or rivers for the many species of salmonids that call them home. Even if you don’t have the salmon/steelhead bug, spey casting is a pretty nifty way to target trout in tight quarters or big water. Come find out just what it can add to your game.

A big thank you to our Confluence customers who keep the fishing reports coming in. We really appreciate sharing the excitement of your adventures and hearing of your success. While we get out there as often as time allows and try to sample a variety of river, stillwater and saltwater fisheries each month, Brandon and I are often distracted by what many might consider fringe fisheries. Big lingcod on the fly has been that grail over the past month and with that season winding down we’re wishing we had some tiger musky nearby or another toothy apex predator ready to shark a giant wad of feathers on a big hook. Truth is, we love it all, from our native bull trout to the coastal cutthroat, the super-charged steelhead and even the oversized bass that dominate our urban ditches. It’s all fun and we appreciate the chance to share it with you. Keep the good times coming and make sure to make the most of this season. 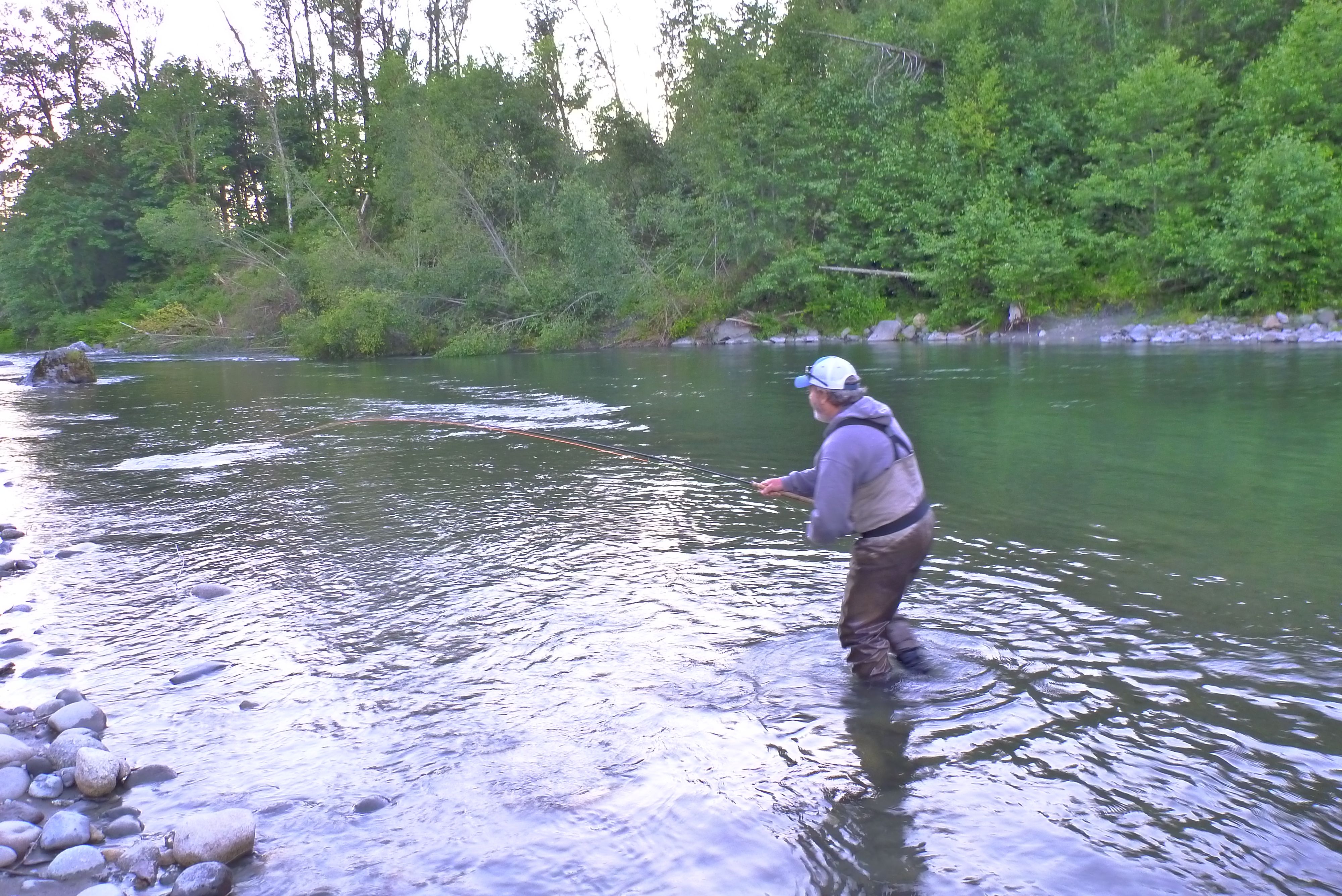 Rivers
We’re pretty excited for our rivers to be open once again and there are a myriad of possibilities from spring chinook to steelhead to trout and char. The ebb and flow of warm and cold air temps and surprising lack of rain have kept many of our rivers in prime shape for the early season, even erring on a little clearer than we’d ideally like. On the steelhead front, the Sky fished really well around the opener and produced a higher number of summer steelhead than has been typical for the first part of June. Early indications seem to point toward a pretty decent season. There seem to be fewer fish in the Stilly as of now, but certainly things can change. You only have to hook one before all odds are out the window. While the water is up and fish are hot, our favorite patterns include Pick Yr. Pockets in orange, pink and purple, Hoh Bo speys in black, purple, blue and pink, orange Marabou GP’s and Reverse Marabou Spiders in black/blue, purple and pink/white.

If you want a shot at big spring kings, the upper Skagit and Cascade are open for them through July 15th and are both kicking out some fish. Fly fishing for kings is not easy, with fish often holding in deeper, faster water that is more difficult to present a fly in, but if you connect, the shear heart-stopping power of a bright chinook will leave you breathless. Your two handed rod will usually cast both the heavy tips and flies a lot easier. In the big water, black/chartreuse or pink Guide Intruders, Squidros and Signature Intruders will work. In smaller, more defined runs like you’ll find on the Cascade, egg patterns and Cabelleros dead drifted under an indicator or tight line nymphed are pretty effective too when the fish are grabby. Often first light or overcast days will afford your best opportunity. 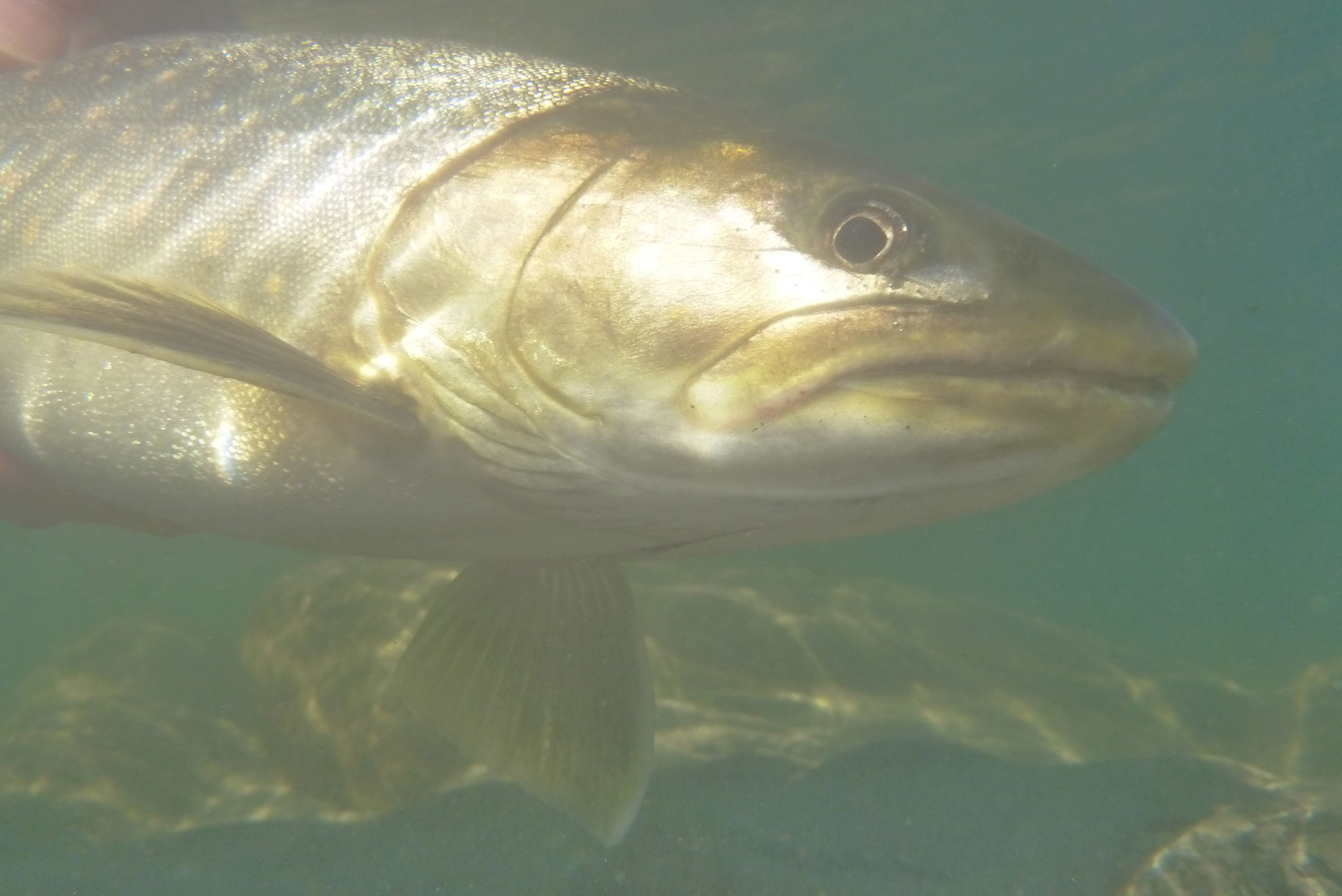 Bull trout fishing in the Skagit and Sauk has been decent if you’re willing to cover a lot of water to find fish. There seem to be a few more fish around the lower gradient sections right now, with fish tending to move up higher in the system when the water drops through the summer. Swinging Hoh Bo Speys, Wounded Sculpins, Bunny Busters, Burnt Chickens and Sculpzillas will get you into some nice bull trout if you find them. Concentrate on the flats and inside seams. Bulls are a great excuse to exercise your trout spey set up.

Mountain streams for trout have been in reasonable shape, but with the forecasted heat wave in our future, expect them to rise with snowmelt. The upper Nooksack and Skagit tributaries usually begin fishing more consistently by mid July. In the cooler water, we often do best with a dry/dropper rig. Stimulators, Bugmeisters and PMX’s make for a good indicator with a small Prince Nymph, Lightning Bug or Flashback Pheasant Tail dangled a foot or two below. Lower elevation streams like Whatcom Creek and the upper Samish are in prime shape now, with caddis flies and little yellow stoneflies being the primary bugs in the mix. If you really want to make our smaller west side river trout more enjoyable, pick up a 2 or 3 weight from the Confluence for your summer outings. The newer fiberglass rods from Echo and Redington are loads of fun. 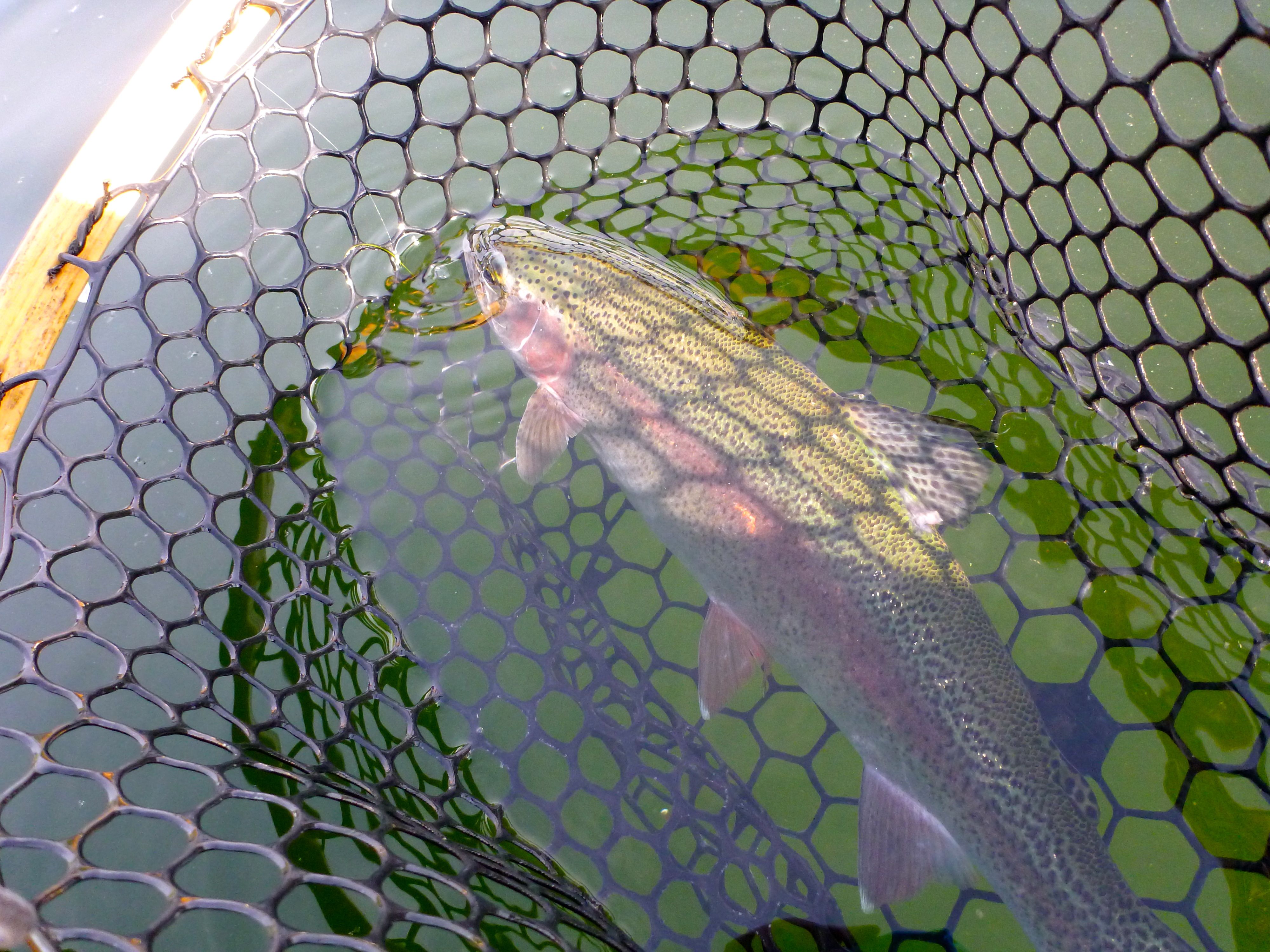 Lakes
Lowland lakes in Whatcom and Skagit Counties are still producing fish, with our recent cooler weather helping to keep water temps down and trout comfortable. We’ve had reports of Silver, Padden, Cain and Lake Sixteen fishing well over the last few weeks, with chironomids, small olive or peacock Woolly Buggers and damsel imitations catching lots of trout. Chironomid Emergers, Griffith’s Gnats, Black Elk Hair Caddis and Parachute Adams are taking fish on top as well. Methow Valley lakes continue to offer good fishing right now. Big Twin was restocked recently and anglers are seeing fish to 17-18″. The chironomid folks have been particularly effective. We add more and more chironomid patterns to our fly bins every year as there are new ones out and literally thousands of variations in the naturals on our stillwaters. Have a good selection of colors and sizes on hand so you can really dial in the hatch.

While chironomid activity typically wanes at many lakes after June, some of the BC interior lakes in the Merritt and Kamloops area see some bigger chironomids, AKA bombers coming off during the summer. I’ll be up there most of next week so feel free to drop by the shop for an updated report later in the month. Good June hatches depending on where you go are Callibaetis mayflies, Sedges, Damsels, Dragons, still some chironomids and don’t forget a handful of tried and true leech imitations in your box. 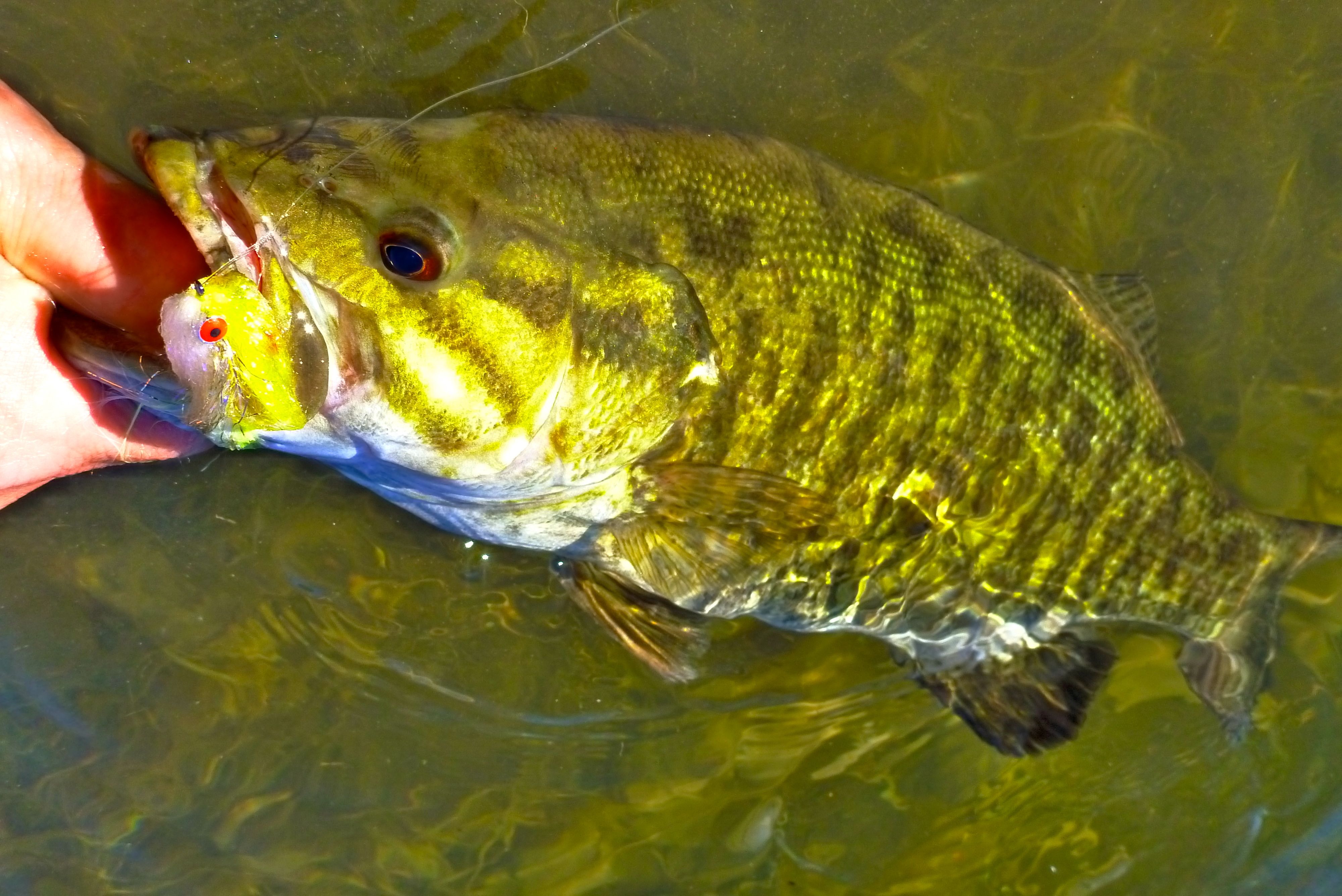 Area bass and panfish fishing has been pretty good recently. Surface Poppers in a variety of colors, Adult Damsels and Gully Worms have been productive for largemouth, which have been pretty tight to structure lately. After a pretty solid month of smallmouth bass fishing on Whatcom, a lot of fish are in the process of recovering from the spawn and have moved out to deeper water. We should see them moving into the shallows during the next few weeks where Zoo Cougars, Olive Zonkers and crayfish patterns will be effective in addition to surface poppers during lowlight periods. The beginning of July also sees the infamous Lake Whatcom Hexagenia mayfly hatch getting underway during the last few hours of the day. We are well stocked on Hexagenia nymphs, emergers and adults at the shop so don’t miss your chance to capitalize on fooling fish by imitating the largest mayfly in North America (size 6’s and 8’s!). Lake Padden also gets this hatch and to a lesser extent, Cain Lake. A lot of alpine lakes should become accessible later next month as well and you can find some pretty solid fishing for hungry trout and along with a finer degree of solitude. 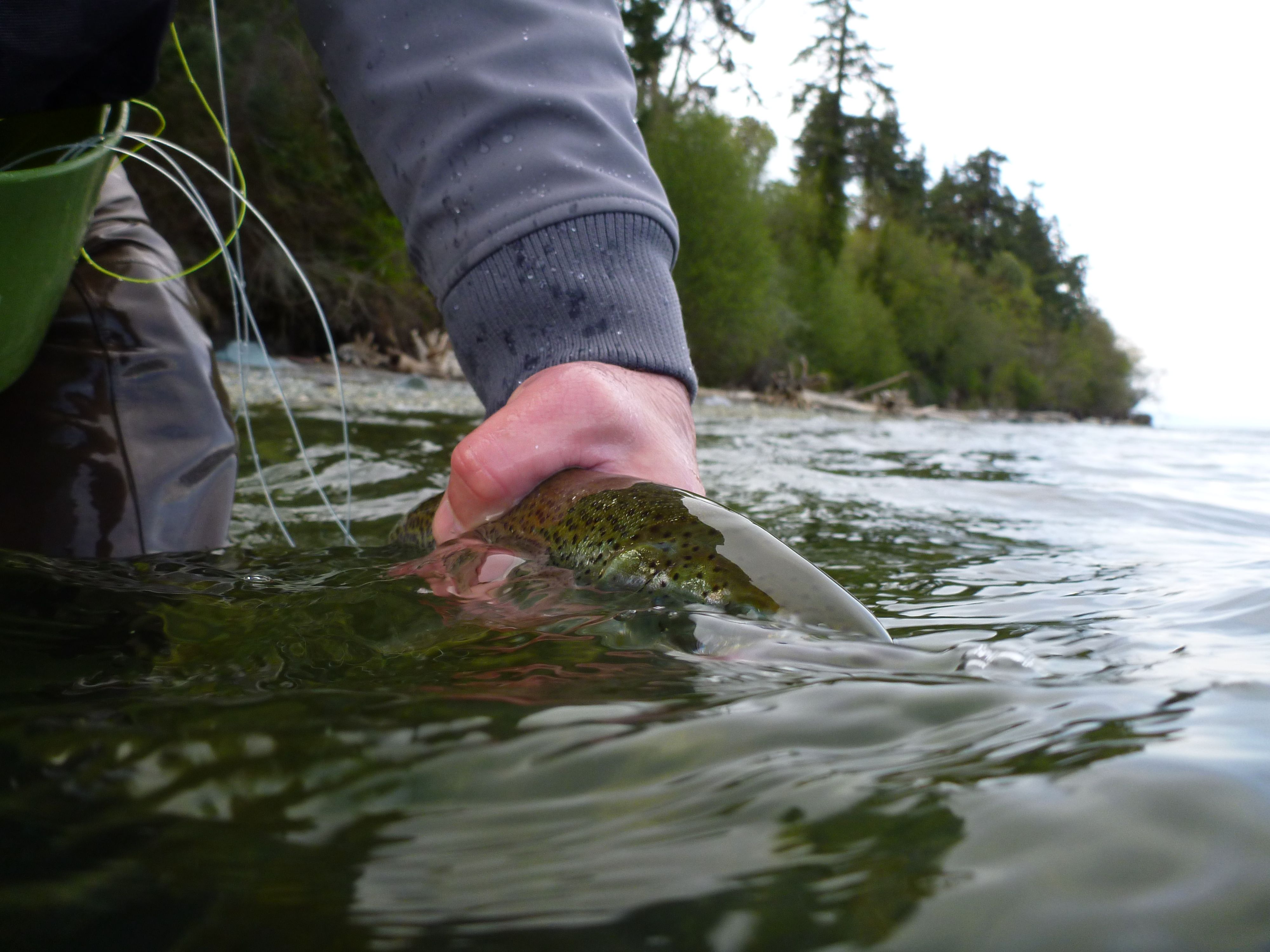 Salt
Chum and pink fry have largely left the Sound and fish are beginning to key on small sand lance and herring imitations. Cutthroat fishing continues to improve on the east side of Whidbey and around Camano along with Hood Canal. Small Clousers, Foul Free Herring, Mini Deceivers, Pinheads and Imitators are great patterns to have afoot this time of year and through the summer months. Brandon and I really developed an all-consuming passion for pursuing lingcod on the fly this year around the islands. It’s not often that we get to dust off the 10 weights to put to use in our own backyard, but these fish are amazingly strong and can be readily taken on the fly in 50′ or less of water. Our lingcod season ends this week in the Sound, but we’re already excited for next year. Puget Sound coho seasons start up in July and are planned to go through the end of September in several marine areas. Check your Washington Fishing Regs for details. That’s a great fishery to start getting ramped up for and we have the equipment to do it. Bend our ears about the coho beach fisheries we have later in the summer, it’s something we get super excited about every season. 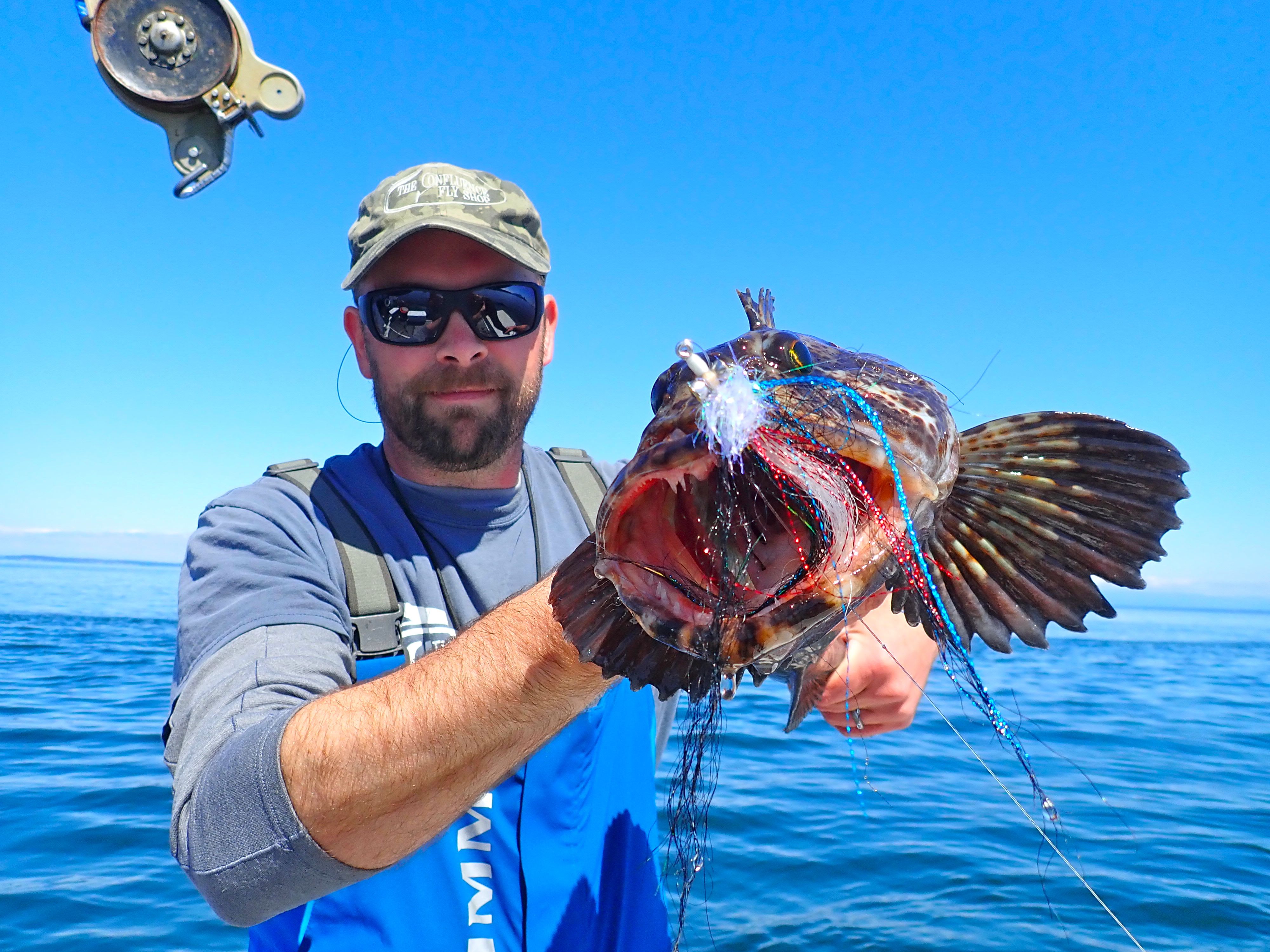