After what felt like the longest, coldest, dampest winter in recent memory, we find ourselves edging ever closer to Spring. I for one really appreciate being able to click off the open sign at the shop with plenty of daylight still left in the sky. Lakes are warming across the state, bugs are hatching and the opportunity to get out on the water becomes more of an exercise in enjoyment than measuring your stalwart ability to tolerate all sorts of nasty conditions in pursuit of a few fish. Chironomids are hatching on our local lakes and water temps are transitioning into the mid 40’s, where trout can be found feeding more actively, thus improving your chances of catching them. Beyond the lakes, chum fry are beginning to show up in the South Sound and typically appear closer to home sometime in April. You’ll start seeing them more readily in the lower Skagit cutthroat fishery before too long and eventually amassing along the eastern Whidbey Island beaches. All in all, good things are beginning to unfold.

I’ve been fishing less than I would like to of late (meaning not every day or at least a few times a week), but I’ve been all over the map from a handful of open lakes around here to the deep South Sound. Days have been both better or worse than expected which is frequently the case this time of year. I’ve tested my Goretex jacket to the limits on just about every outing and it’s held up remarkably well, with the exception of an accidental swim in Puget Sound last week that effectively water logged me from the inside out. The highlight was finding a pretty impressive largemouth in February while hunting for holdover trout on a Whatcom County lake. I’m already getting excited for spring bass and conditions that don’t warrant rain jackets and wool gloves!

We’re pleased to welcome more traffic in the shop these days after a particularly slow winter. People seem to be getting ready for the heart of fishing season down the road. It’s even looking like some of the Canadian border restrictions may ease up this spring and we’re really looking forward to the possibility of revisiting some of our favorite BC fisheries that we haven’t been able to experience since the pandemic began…fingers crossed. We’ve also updated our in store mask policy to be optional in accordance with current Washington State regulations and guidance from the CDC. We promise to continue to do our best to recognize you when you come in, though for many we’ve only gotten to see the upper portion of your face for the past few years. If you’re still more comfortable wearing a mask, by all means continue to do so.

Please be sure to check out our current sales in further along in the newsletter as we’ve added a number of new items. In addition, we’re helping to sell off some used fly fishing gear from a generous donor to help raise funds for the North Sound Chapter of Trout Unlimited. Lastly, be sure to mark your calendars for May 14th, as we are excited to announce Speyapooza 2022 at Howard Miller Steelhead Park in Rockport on the Skagit. There’ll be plenty of gear demos, spey casting instruction and some great conservation speakers to round out the day. We’ll have full details on Speyapalooza by our April newsletter.

We look forward to seeing you in the shop and on the water soon! 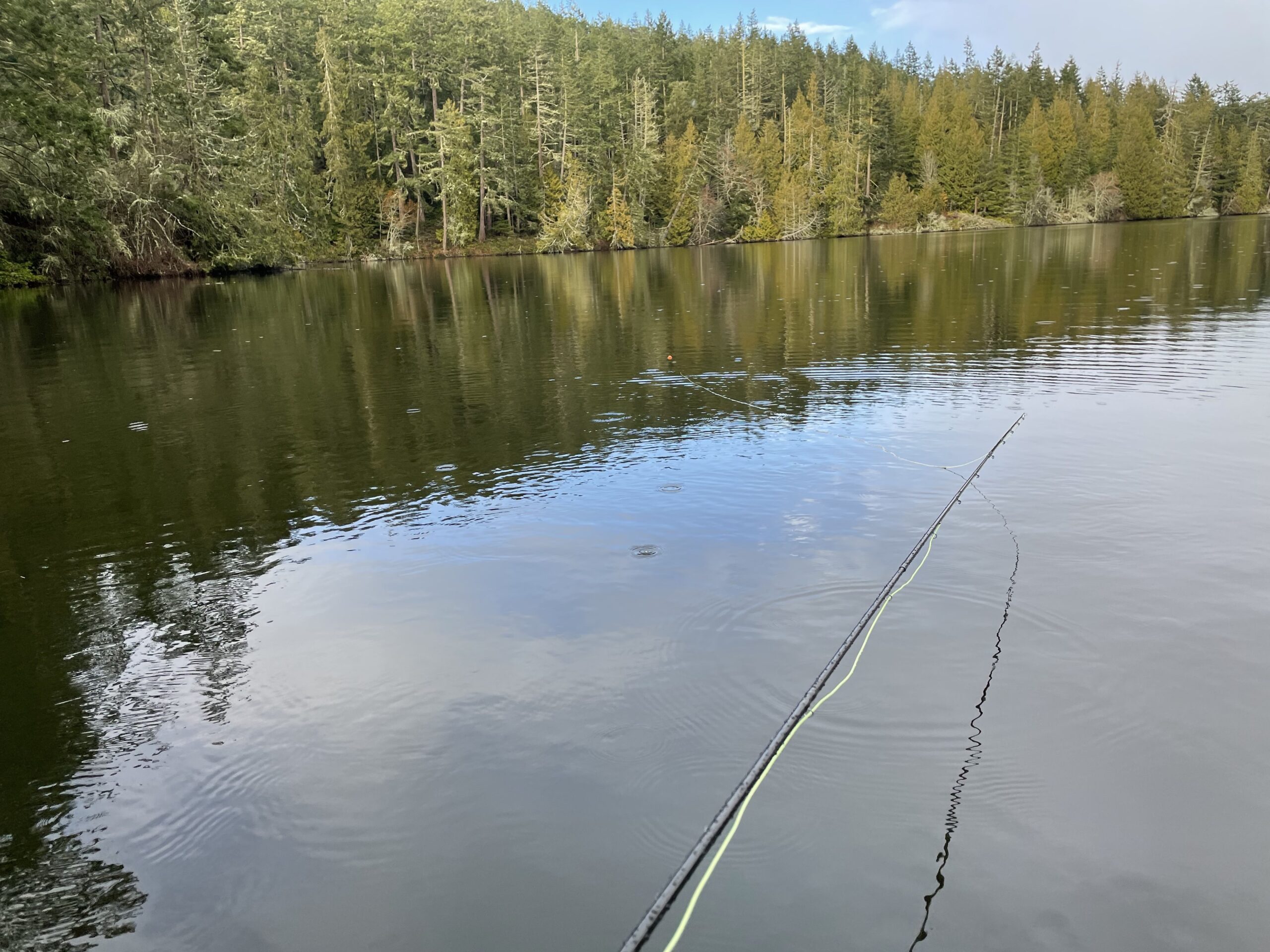 Lakes
With most of our local moving waters closed for the season until late May or early June, exploring stillwaters is really the name of the game this time of year. The parking area at Pass Lake is still closed due to a sinkhole and compromised culvert in the lot. Unfortunately, it doesn’t appear this will be a quick fix. Folks are utilizing some of the roadside pullouts to access the lake with float tubes and small inflatables and the lake itself remains open for fishing. Please exercise caution if you choose to access the lake from the road…that is one busy stretch of highway adjacent to the lake! Pass and Lone have both been fishing better over the last few weeks, with reports of good fishing and chironomid hatches underway most days. If you haven’t seen our chironomid pattern selection lately, it’s pretty extensive with the sizes and colors to match most hatches.

﻿Squalicum has also been producing some cutthroat when the wind and weather aren’t too horrendous. I’ve linked to the WDFW trout stocking report in the past, but another really useful tool is the stocking plan. This document gives you an at-a-glance look at all the year round lakes (and seasonal ones) that will be stocked in the coming months. In a perfect world, all of our lakes would have self-sustaining populations of large wild trout. In reality, most don’t have sufficient spawning habitat to support natural reproduction and rely heavily on plants to maintain a fishery.

As the waters warm, we’ll be looking for pre-spawn bass action in some of our year round lakes like Terrell and Fazon. We’re far from topwater popper time, but fishing low and slow around structure will produce some hefty fish before primetime really gets going. Fishing balanced flies under an indicator can be a really effective strategy too. 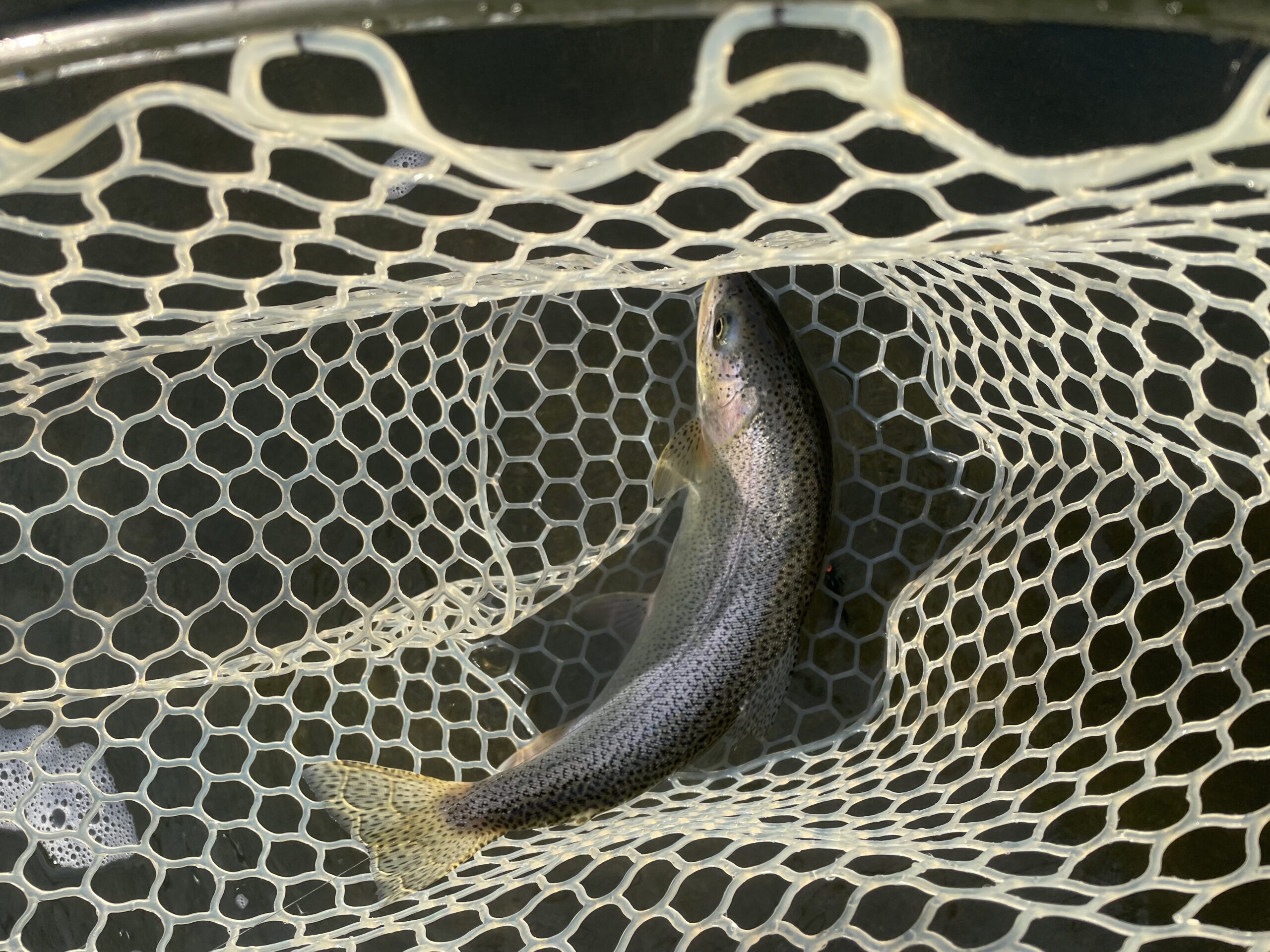 Rivers
There’s really not much to report in the way of moving water until things open back up in a few months. The rivers on the Olympic Peninsula closed early this year due to perceived returns of wild winter steelhead falling substantially lower than the already poor return projection for this year. Between those closures and the lack of a spring season on the Skagit, it’s a bad year for both steelhead and steelhead anglers alike across Western Washington. Hopefully the lack of angling pressure provides steelhead with the sanctuary to find unmolested spawning success. Nonetheless, there remains a myriad more problems to address with Northwest steelhead beyond just closing angling.

We do have the lower Skagit trout fishery opoen below the Memorial Hwy Bridge in Mount Vernon. Reports have not been stellar so far, but it’s early yet and water levels have been less than ideal much of the time. If we get a dry spell and the river drops and clears fishing should improve. We are really just starting to see some early fry coming out of the gravel. As numbers build, expect bull trout and cutthroat to be lurking along the woody debris waiting to ambush fry. When it’s good, you can typically expect to see fish slashing at the surface as fry tend to migrate in the upper water column. We’ve been tying plenty of fry patterns over the last month if you need to stock up.

Beyond our local waters, we’ve had several reports that the Yakima River has been fishing well this spring when the river levels are conducive. This can be a dicey time of year between sudden snow melt and atmospheric rivers but when we get a decent weather window and stable conditions, the big rainbows are hungry. Blue wing olives and skwala stoneflies are the predominant hatches right now with March Browns coming on the horizon. Swinging sculpin patterns can be really productive too this time of year.

Beaches
Beaches are beginning to fish well. Sea run bulls are showing along the northeast Whidbey beaches and the chum fry outmigration is underway on Hood Canal and in the South Sound. We typically don’t see large numbers of fry in the North Sound until mid-April and May, but smelt and herring imitations in a few sizes will fill the void until then. Chum Babys, olive/white Clousers, Imitators, Chumbody’s Baby and Eyed Fry imitations are good patterns to be fishing right now.