Certain cyclical events indelibly mark the season and give us a sense of time and place without ever having to glance at the calendar or peruse the screen of your smartphone. The other night as I was taking out the recycling after hours at the shop, I became acutely aware of the sentinel of seagulls aligned along the roof top edge of the Harbor Mall. It was not their usual cacophonous squawking that alerted me to their presence, but the dead silence on a pleasantly warm evening and the dramatic splat that occurred not five feet behind me and the sudden appearance of a telltale milky puddle. I got lucky that time, but it served as a not so gentle reminder that timing can be everything. When the seagulls line the buildings around the Squalicum Harbor, criss-crossing aerial highways from one corner to the next and splatter bombing parked cars along their flight path, it is undoubtedly May. By the time sooty flightless chicks drop unwittingly onto the pavement and start wandering confused into the fly shop it’ll be sometime in late June. It’s a fun way to map the year.

A sage old compadre from the local fly club always says the bluegill fishing gets good when the cottonwood seeds start piling up on the lake like billowy snow. He’s right on the money. Though it can be pretty good before then, it’s not a bad rule of thumb to follow. I found it was not great fishing yet several weeks ago on Fazon, but then we humans tend to expect things to happen on our watch, always hopeful that things’ll get going a bit earlier than the year before. It’s time when it’s time. This year the water seems to be taking a little longer to warm up and for the fish and the bugs to be where we’ve come to find them over the years. Warmer nighttime temps and a surplus of T-shirt days are definitely helping. Trout fishing’s been decent of late on both sides of the hills and those little spiny rays we particularly love to get after with a fly rod this time of year are about to go off. 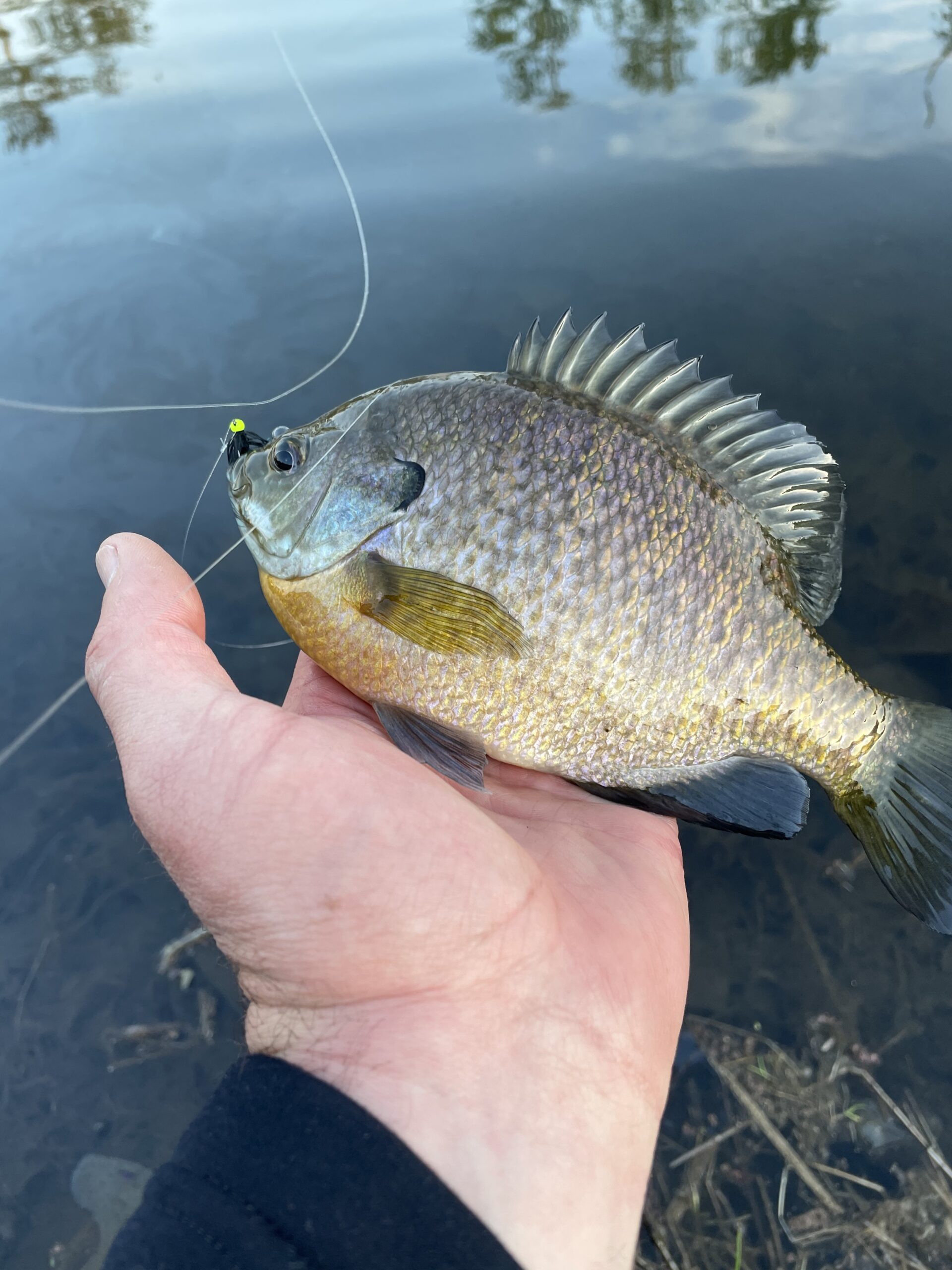 May marks our 8th year of business at the Confluence. Actually, February did, but who wants to get out and celebrate with a big old BBQ when the weather is on the nasty side? We’re sad to say we’ll not be doing the celebratory BBQ this spring again due to Covid but hope to get back on track with the fanfare down the road when we can safely have big gatherings again. We continue to appreciate all that you do to keep us afloat and look forward to serving the local fly fishing community for many years to come. We’ve enjoyed getting to know you along the way.

Many have been asking about our free spey casting clinics and when those start up. Check out our events page for a current listing of dates.

In the meantime, take advantage of some of the lovely weather we’ve been seeing and spend some time on the water, you won’t regret it. There are lots of fishing options available after the April Lowland Lake opener and many more on the horizon. And one last note…treat your mom extra special for Mother’s Day on Sunday. If it weren’t for her, you wouldn’t be around to catch as many fish as you do, or would like to. 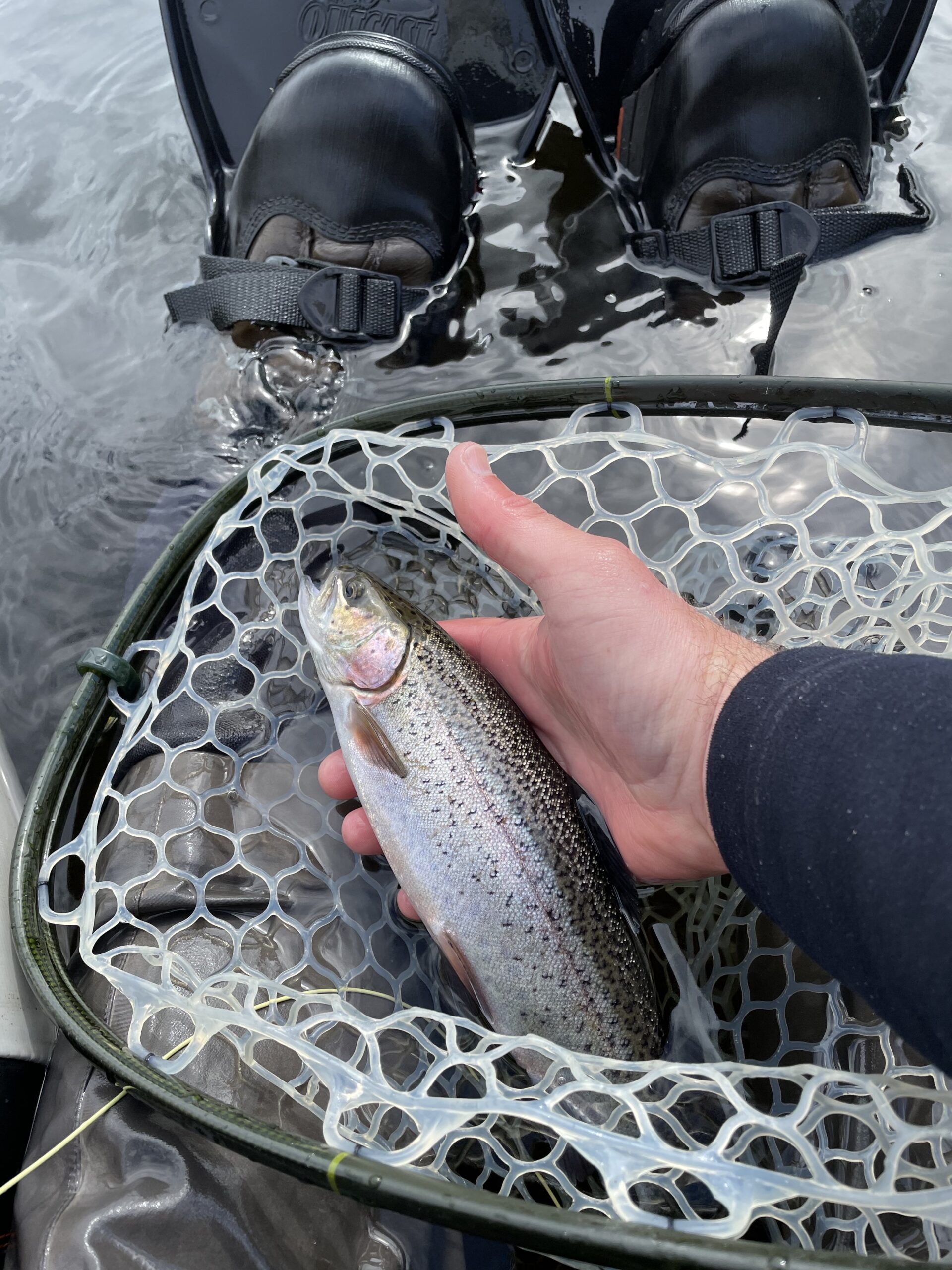 Lakes
With most rivers west of the Cascades shut down until the end of the month, May is inarguably lake time and the opportunities are many. The WDFW stocked a variety of area lakes last month and we now have countless places to go to pursue 8-12” hatchery plants. These little critters can be fun on a light 2 or 3 weight rod and readily take flies. Attractors like red or green Careys and Spratley’s get it done much of the time, Pumpkin Heads, Olive Willy’s and the venerable Woolly Buggers are hard to beat as well. If you’re getting a lot of short strikes, pinch down the tail on your fly to shorten it up, or better yet, trail a smaller nymph or wet fly as a dropper to sweeten the pot and seal the deal. Hare’s Ears, Zug Bugs, Flashback Pheasant Tails and a variety of soft hackles work very well in this capacity. Padden, Cain, Toad, Silver, Heart, Sixteen, Erie, Clear, McMurray Grandy…The list of planted trout lakes goes on and on. You can check the WDFW stocking report for info on how many and when. These fish are more or less cut from the same cloth. Pick a lake or a physical setting that appeals to you and have at it. 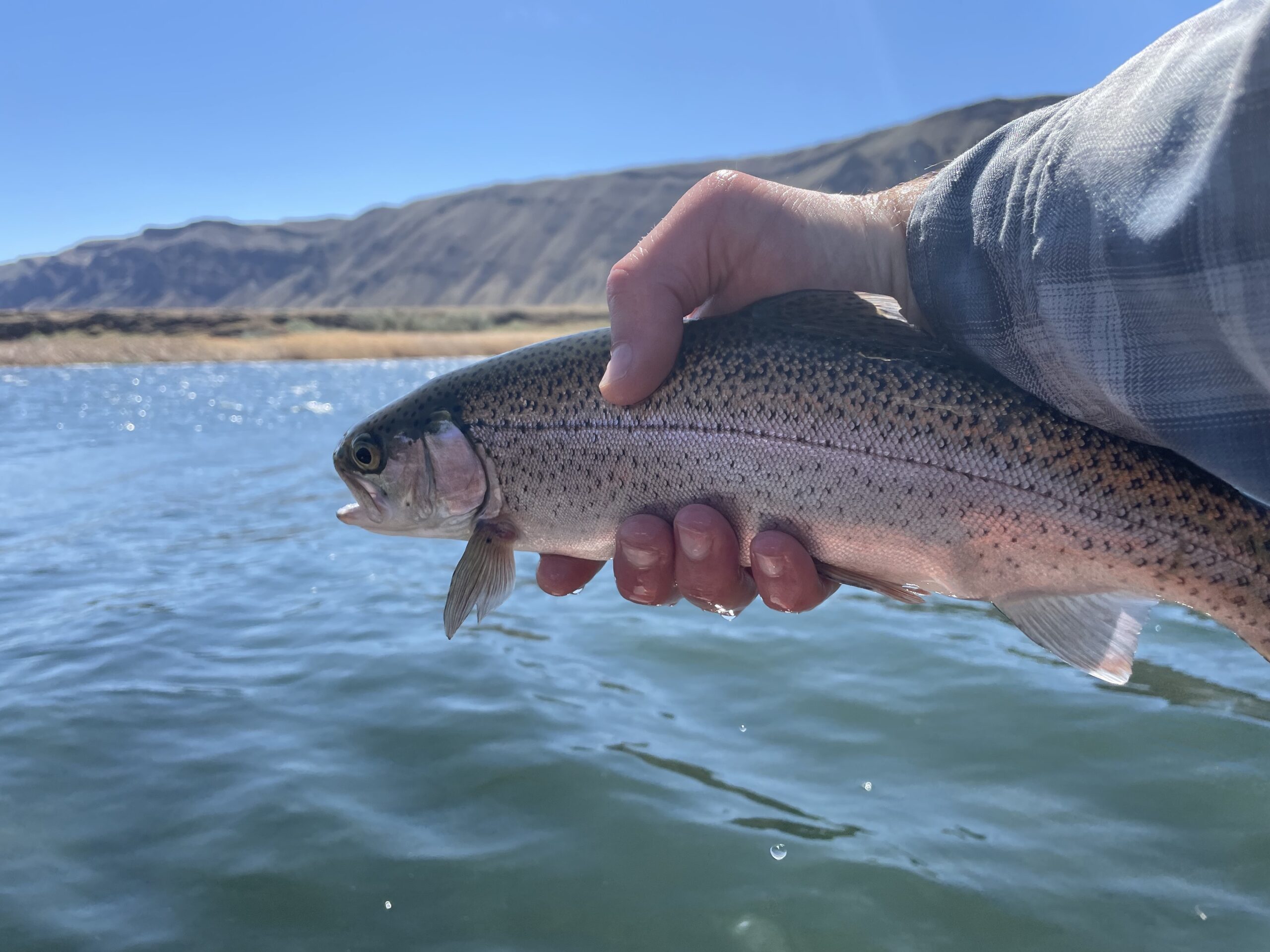 If the mass hatchery plants are not your cup of tea, Pass and Lone are fishing decent for bigger trout. The fishing has been hit and miss lately, but chironomids continue to be a staple in the spring trout diet and have generally been the ticket to the most success. Many eastside lakes are in their prime right now. Chironomids have been key there as well, but I’ve been seeing more callibaetis mayflies and even a few damsels out and about, so be prepared for these possibilities as well.

I just got back from a lake foray in the Vantage area. We were surprised to arrive to an empty parking lot on what should have been an otherwise busy weekend. Apparently, everyone else took the wind forecast much more seriously than us and we had the lake to ourselves. We posted up on the leeward side of a few islands and had fantastic fishing all day with a #16 pearl ribbed black chironomid or black ice cream cone. Traversing the lake in whitecaps and 25mph winds to get where we got was another story but we survived and I only peed myself a little bit. 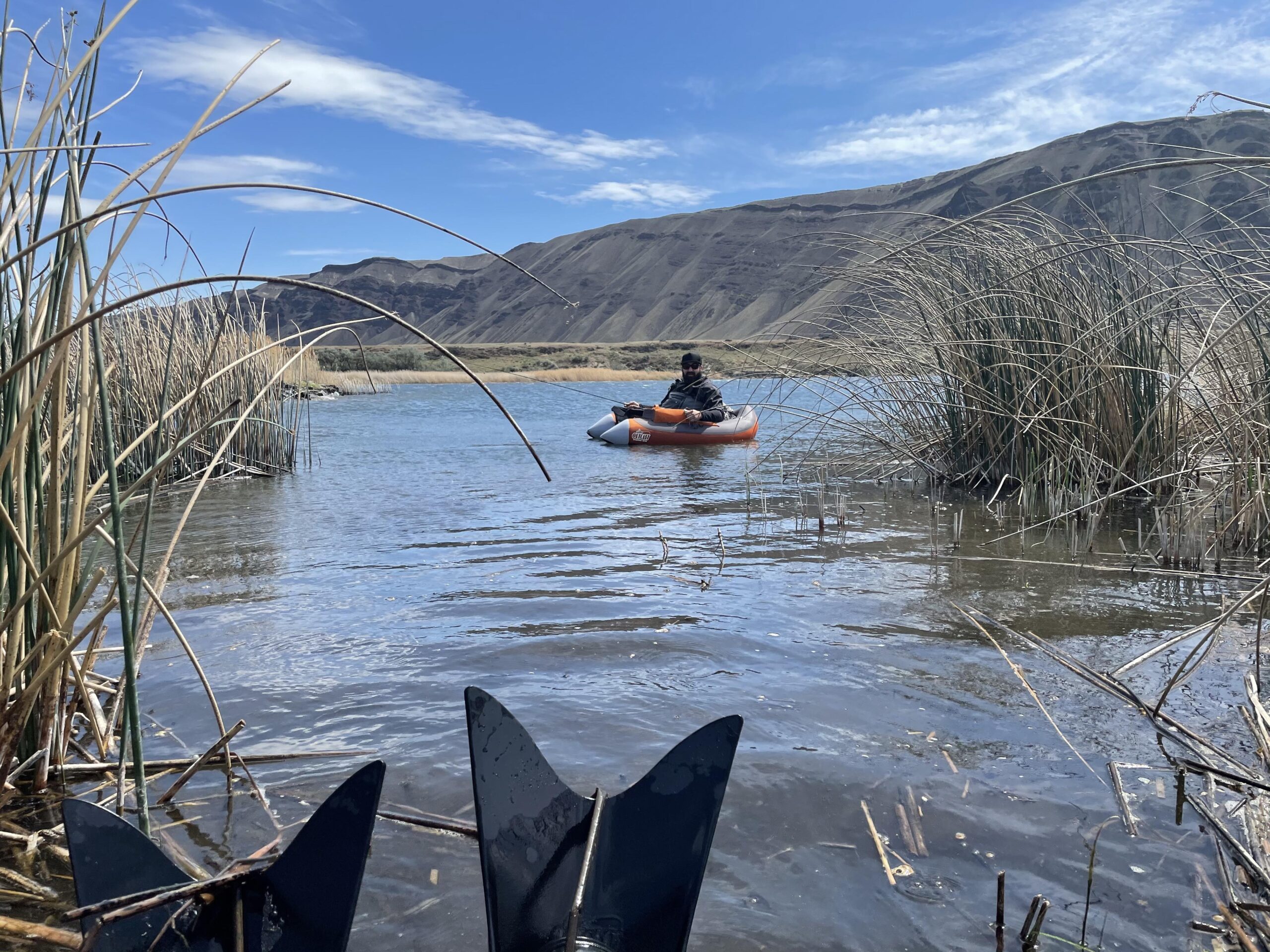 I’ve been chasing bass and bluegill for about a month with limited success, but things are now beginning to happen. We’re not seeing bedded smallmouth on Whatcom or Samish, or anywhere for that matter, but expect that to kick off in the next couple of weeks as things continue to heat up. Bass are now venturing into the warmer shallows however and we’re finding some pretty nice pre-spawn fish. Terrell has been good, Fazon is starting to improve and any of the shallower lakes and ponds around the North Sound are definitely worth a look-see right now. I think we’re a ways out from top water being terribly productive until late May and into June, but Gully Worms, Bass Turds and Jawbreakers have been good choices, with smaller Buggers, leech patterns and Bluegill Bullies picking up some early panfish. 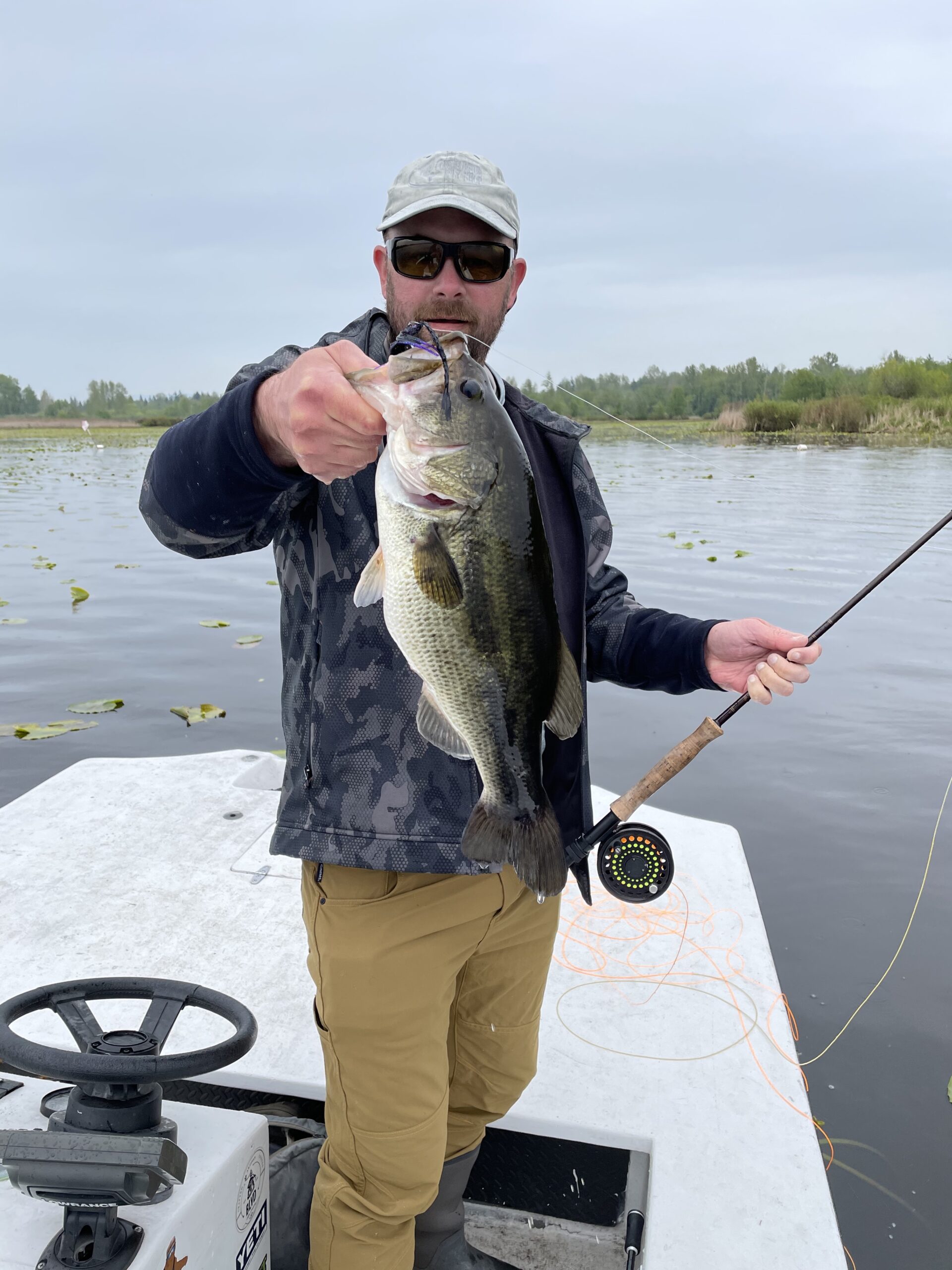 Rivers
Not much open locally aside from the Skagit below the Memorial Hwy. Bridge for trout. We look forward to more streams and rivers opening the Saturday before Memorial Day. In the meantime, if you need your river fix, the Yakima is open and the bugs are popping. I fished the Cle Elum stretch last weekend and still saw good numbers of March Browns coming off in the afternoon in addition to more and more caddis activity. The big Mother’s Day caddis hatch shall be underway here soon and is a pretty fun event to catch if you’re headed that way. The river is currently dropping into nice and fishable shape so you may have a great window for success opening up. 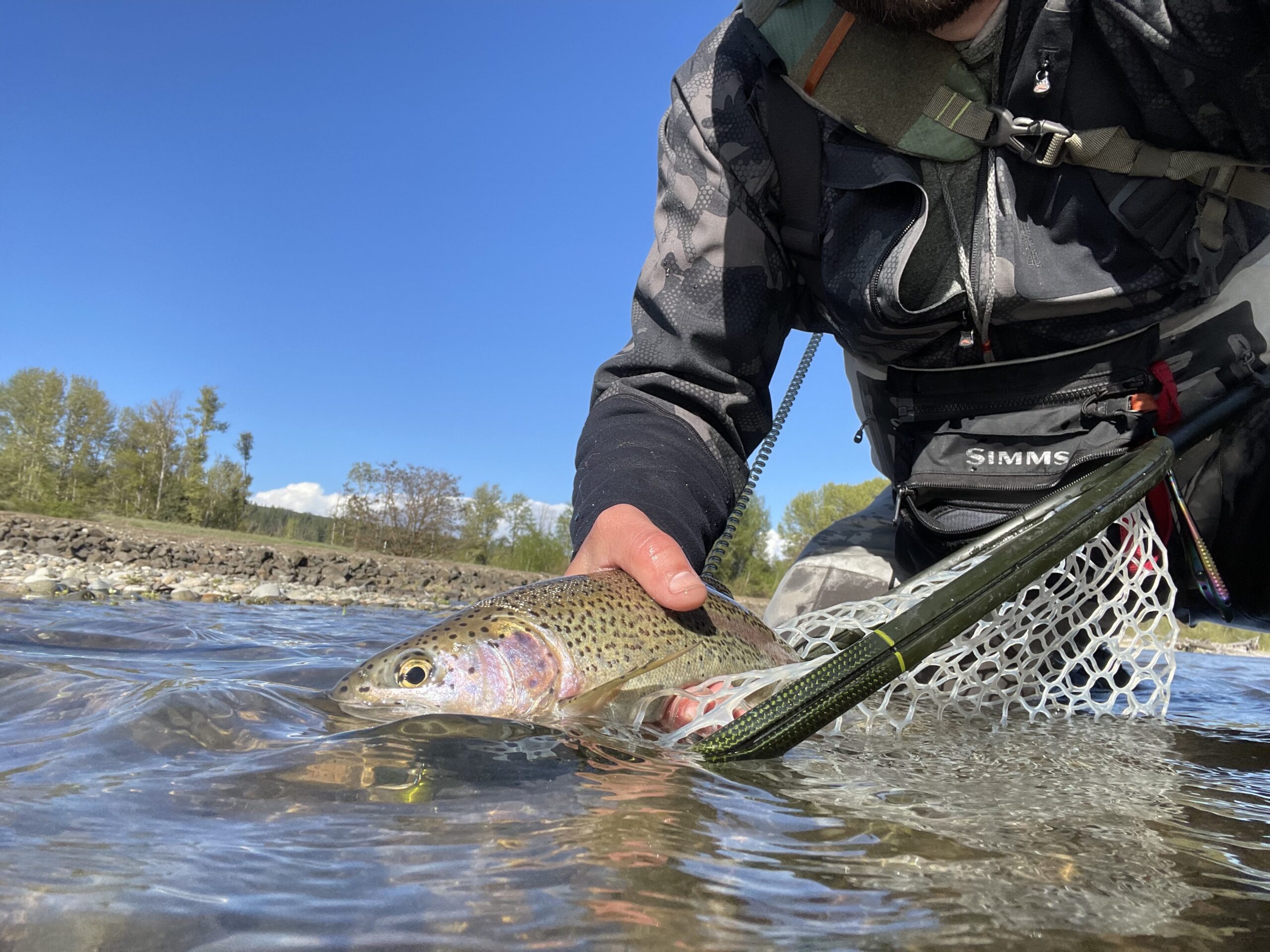 We’re finally seeing a good mix of sea run cutthroat and bull trout of the east Whidbey and Camano Island beaches and outmigrating chum fry are the name of the game in most areas. Chum Babies and Chumbody’s Baby are great patterns along with Mini Gurglers for the topwater game. A few larger Just Keep Swimming’s in Whitebait and Fry colors and the Flashdrive have you covered for your larger smelt and herring imitations for the bulls. 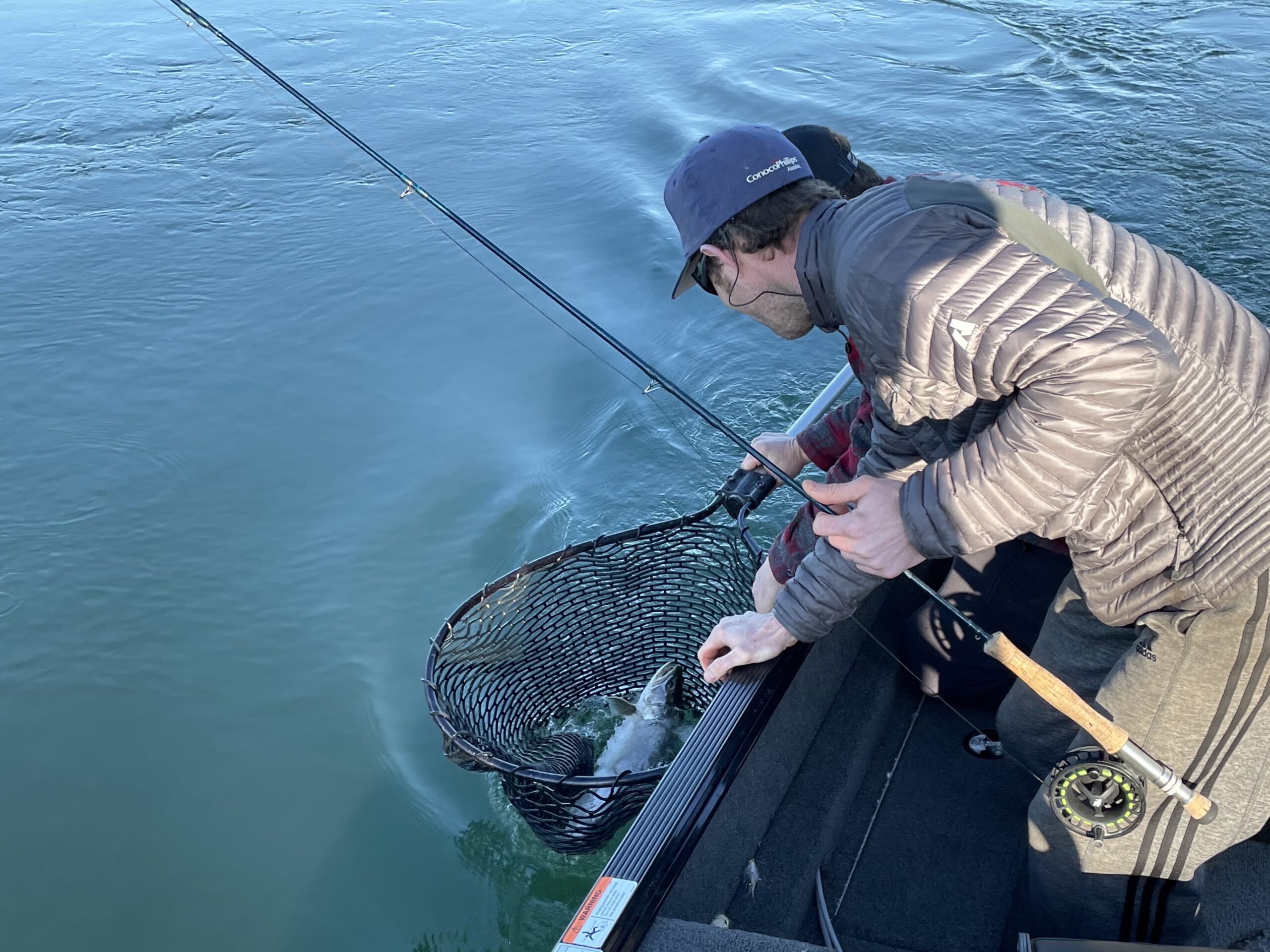