Gray skies, unrelenting rain, brown rivers and a lackluster Seahawks season. It’s enough to drive a Pacific Northwesterner mad at times. Seems like we’ve gone from one extreme to another and have been regularly bombarded by exponentially more raindrops than the brilliant rays of sunshine we experienced all summer. Then again, that’s life in these parts this time of year and we all knew we’d be be reminded of it sooner or later. Fortunately, most of us stalwart fly fishers can find a silver lining to just about anything. For one, there’s fewer people on the water when you get out there. Sometimes you’re in the right place at the right time and a massive pod of ocean bright fish come pouring by your lonely gravel bar in a freshly cleared river. Trout can be less complacent about eating and try to savagely pack in every calorie in sight before winter. It’s really stunning to behold the landscape in its kaleidescope of fiery fall colors, at least while the maples still have leaves. The west isn’t totally on fire anymore. Coho season on the Skagit got extended through the end of the year and Pass Lake is finally open to fishing again after a lengthy stint with toxic blue green algae. The list of reasons to be thankful goes on. I for one, don’t require too many to just go fishing. 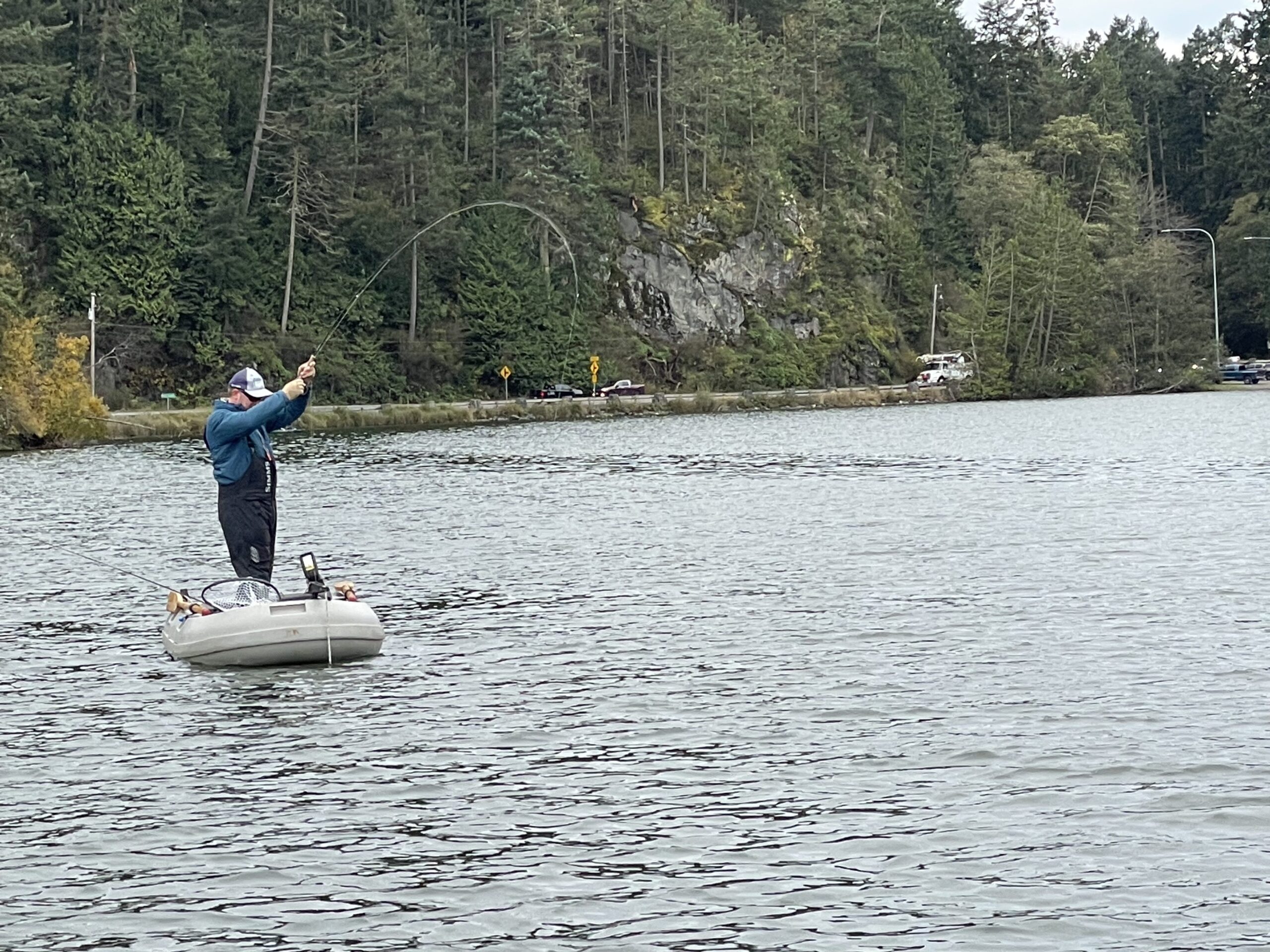 Things around the shop have been pretty slow lately, we imagine this to be largely a reflection of blown rivers and lousy weather. Nonetheless, it seems to be the unofficial start of fly tying season for many and we continue to be pretty well stocked on materials. We’ve got some cool new hats in from Rep Your Water this month, some cozy neck gaiters to take the chill off and our favorite shop hoodies to keep you toasty in the blustery weather. We also have some sale products for this month to make way for new stuff coming out next year. Lastly, our winter hours remain the same as always, but we’ll be closed on Thanksgiving Day, November 25th, as well as the day after on November 26th. I think we can all use an extra day with family this year or an extra chance to get on the water or better yet, both.

Stay warm and dry out there. If you’re neither, we’ve got answers for you at the Confluence. Otherwise, have a safe and happy Turkey Day and we hope to see you soon. 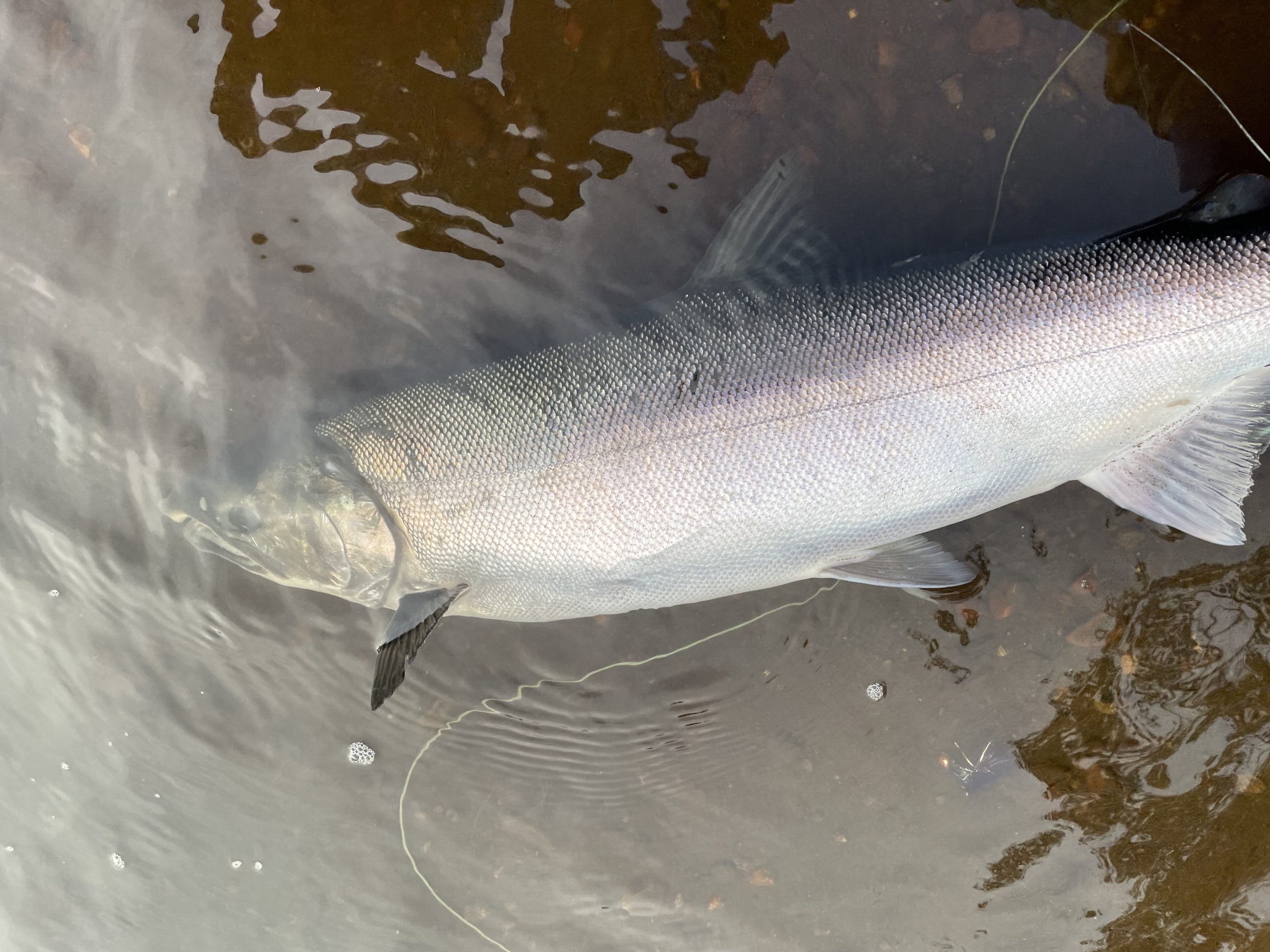 Rivers
I think I’ve sustained a mild neck injury from watching the wild ups and downs on the USGS hydrograph this past month. It’s been a perpetual soaker and finding our local rivers in good fishing shape has been no easy feat. If the freezing level would stay consistently low it’d make a world of difference in terms of keeping the rivers fishable. There have been plenty of late coho around in the Skagit system when we can get at them and a few in the Nooksack as well. We should start seeing Nooksack chum this month appearing over the next few weeks. For the coho, stick to brighter and flashier patterns like the Dirk Wigglers and Deuce Wigalos, Popsicles and Pink Dali Llamas. For chum in the Nooksack, Alaskabous and Starlight Leeches under an indicator on a floating line are the way go.

Sea run cutthroat fishing is still good in the Skagit and Stillaguamish, after the big water we’ve had they will tend to be spread throughout the river and often concentrated below areas of salmon spawning. Hot head buggers, Egg Sucking Leeches and egg patterns or trout beads can be really effective right now. Similarly, bull trout are on their way downstream after spawning and can be caught using the same tactics. If it’s too nasty for you on the west side, the Yakima is still worth a visit this month for some fall blue wing olive action, and it’s definitely time to be swinging sculpin patterns over there. 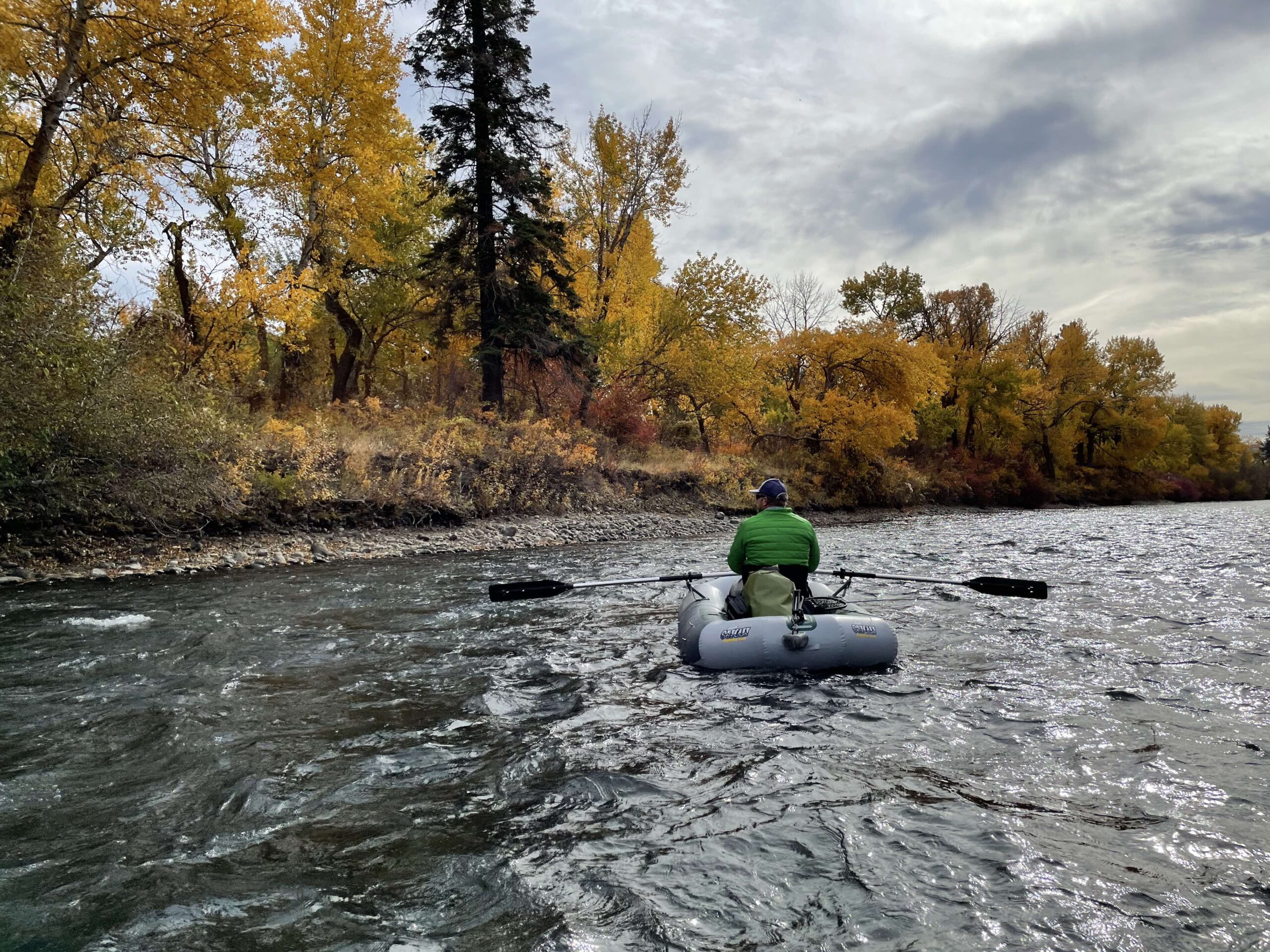 Winter steelheading is right around the corner, with hatchery steelhead showing up on the coast in late November and more into December in our local waters. The coastal wild steelhead forecast for this year is similar to last year’s. Again, not great on most rivers. WDFW is conducting a series of public meetings to review the forecast and accept public input on season setting and management strategies. There’ve been a couple of meetings already. The next is a virtual town hall on November 9th. We encourage you to attend if interested and voice your comments or concerns. There will be a final meeting in late November if you can’t make the meeting tonight. Steelhead returns have been on a downward trend up and down the west coast and this is your opportunity to help shape seasons that will help minimize our impacts and allow a better chance at recovery. There is also a petition out there around some rule changes in Washington to better protect juvenile steelhead and wild rainbow trout in our Puget Sound rivers. You can view and sign the petition here. 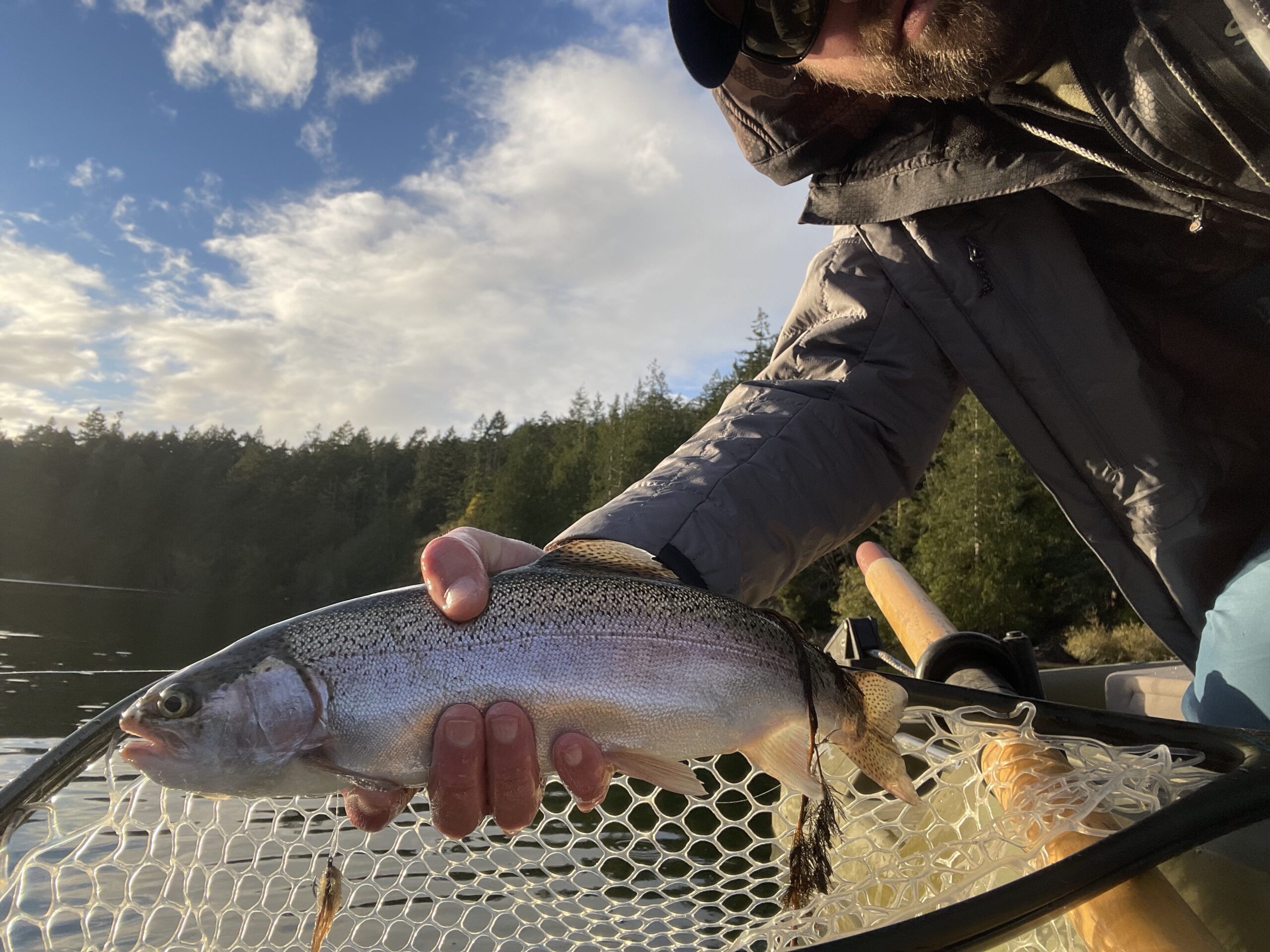 Lakes
Many lakes closed at the end of October, but some of the year round lakes continue to fish well until it gets really cold out there. Squalicum cutthroat fishing has been really productive using micro leeches and silver Rolled Muddlers. On calm, windless days, Griffiths Gnats and CDC Midge Emergers work well on top during the afternoon midge hatch. The news we’ve all been waiting for is that Pass and Lone Lakes are once again open following a long bout with toxic algae blooms that rendered them unsafe and inaccessible to the public. The fish don’t seem to mind and should be aggressive after a long period of rest. Minnow patterns are key at Pass in the fall and leeches work well too. The better fishing has been late afternoon and into the evening. For Lone, chironomids, leeches and bloodworms work well this time of year, as do attractor patterns like Boobies. 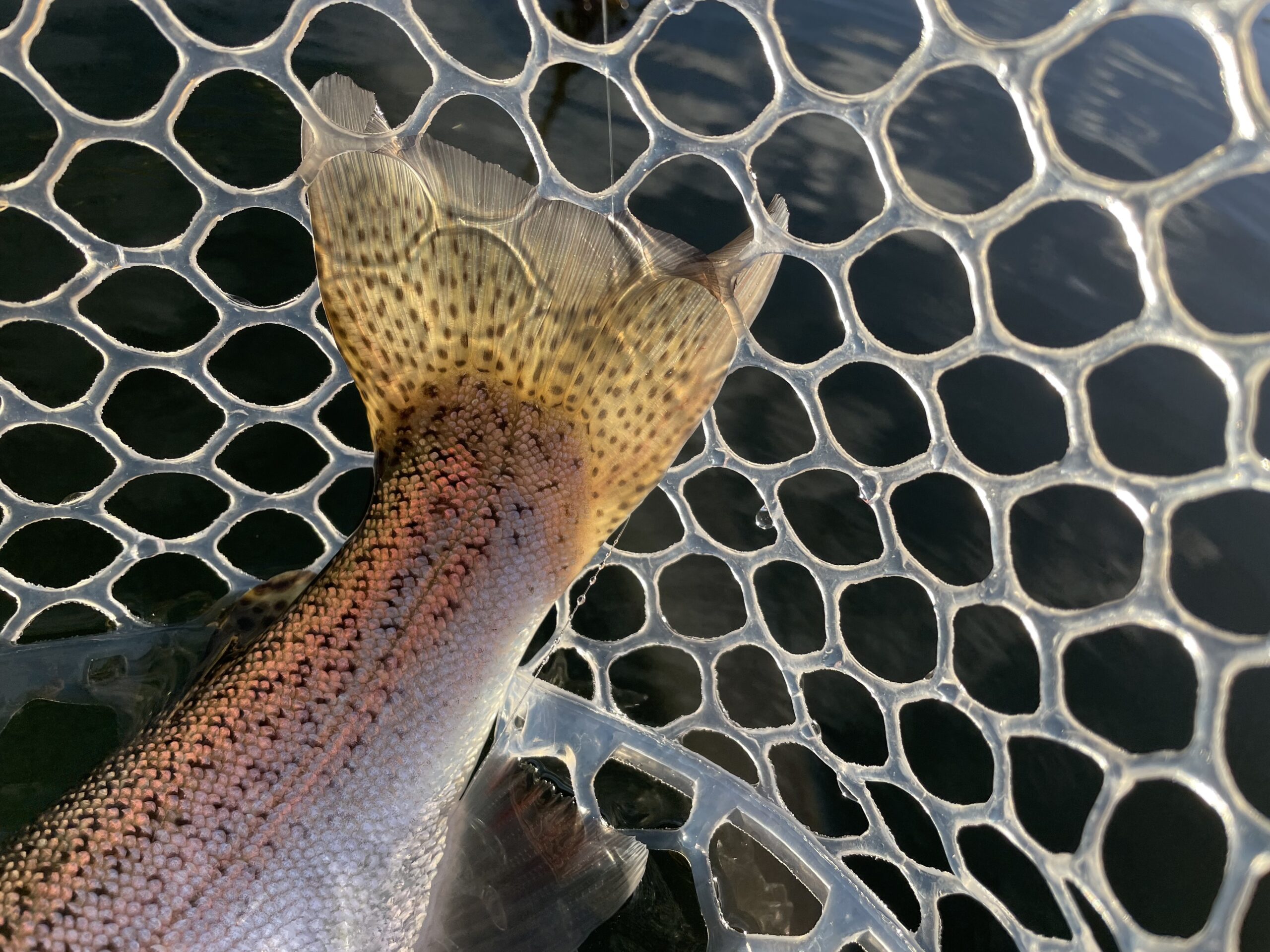 Beaches
Not a whole lot happening in our neck of the woods. Mid to South Sound and Hood Canal are going to be your best cutthroat options until spring.