For Pete’s sake, I know we’ve all been reluctantly performing a half-hearted rain dance after an amazingly pleasant extended fall but seriously? The skies opened up and the mercury plummeted nearly 40 degrees seemingly overnight and it’s been a challenging process to quickly re-adapt to the damp blanket of gray. On the plus side, shrunken rivers are full again and salmon now have unrestricted access to get where they need to go. The trees are striking in their fall colors at last and are a sight to behold for the short while their leaves will remain intact. And above all else, at least much of the thick caustic fire smoke is finally gone.

I spent a few days up at Ross Lake last month braving the dense immutable cloud of smoke choking the lakeshore well on up into BC. We observed smoldering fires on the hillsides above Boundary Bay and an eerie orange haze that all but erased the stunning fall scenery as we jetted up-lake each morning in search of fish. Ross remains one of my favorite destinations in the North Cascades and I’ve missed it dearly over the last few seasons. Between pandemic era restrictions and the road into Hozomeen via Hope, BC remaining under construction, access has been pretty evasive for some time. The October fishing was everything I’d remembered it to be and then some. I found some experimental flies I’d tied years ago with Ross in mind and was finally blessed with an opportunity to test them. Low and behold they worked. Finding fish in such big water can be challenging, but once you locate them the trout tend to oblige when you show them something that falls within their wheelhouse. Let’s hope we’re soon back on track for easier access next summer to enjoy this incredible fishery in our backyard. Special thanks to Tom Barnett for making this trip happen. It was such a fun time to catch up and put some of the puzzle pieces together that resulted in some extraordinary fishing. Fish certainly play their role in the successes of a trip, but beyond their willingness to cooperate, the company you keep is always paramount and I’d be hard pressed to find better people to enjoy it with. I’m already looking forward to the next adventure. 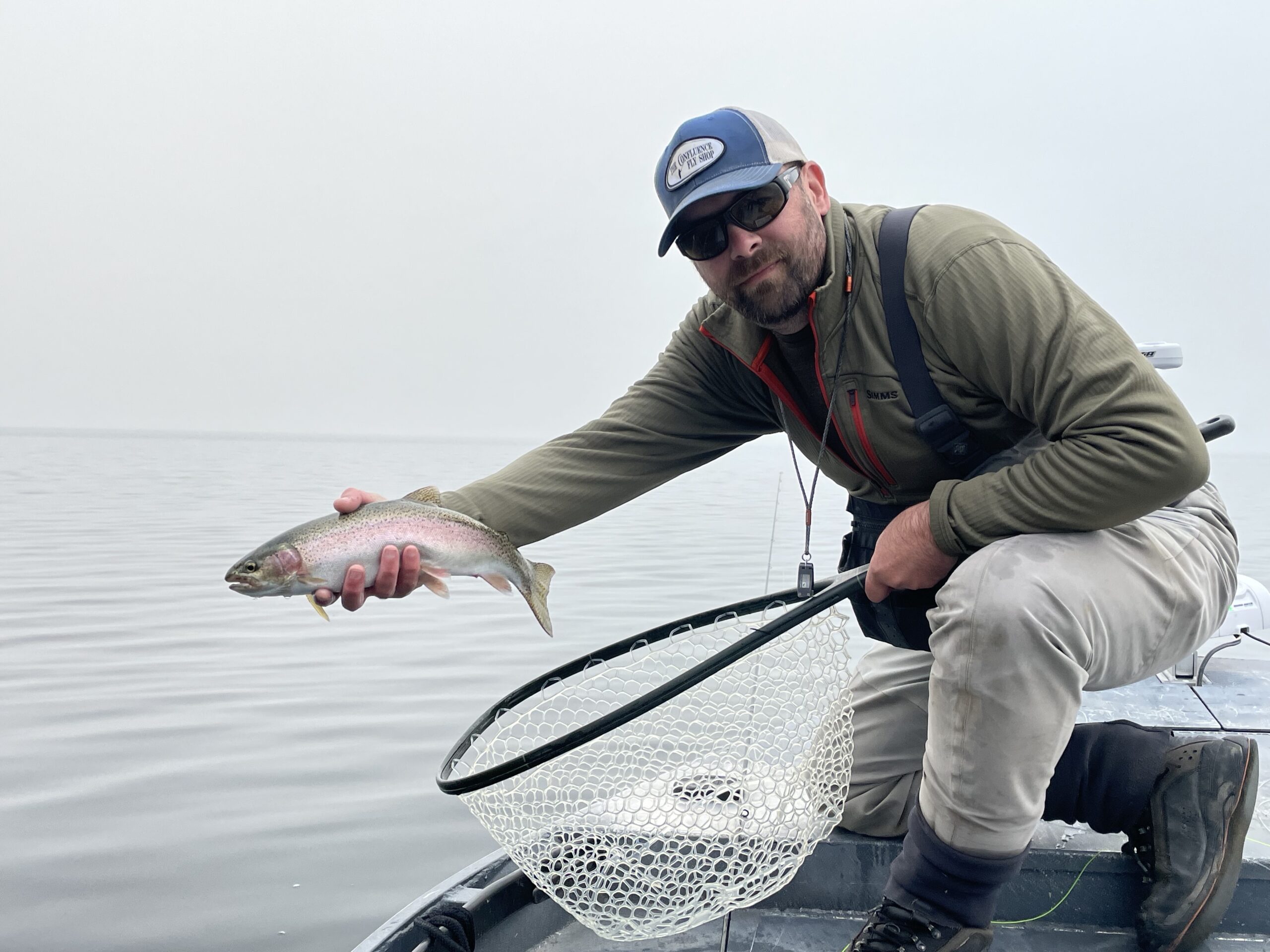 Every year it’s tough to let go of September and October and their invariable ability to produce some of the finest fishing of the year. Change tends to be tricky for most of us, but I think it’s generally better to look ahead than to longingly stare backwards. We have some good events coming up this month to help us keep dreaming of fish despite what the elements may throw our way. Be sure to stop by the shop and pick up tickets to the International Fly Fishing Film Festival at the Lincoln Theatre on November 17th. As an added bonus, save your IF4 ticket stub and redeem it at the shop for a one time 10% off your purchase through the end of the year (excluding any sale items). On the subject of sales, we have a bunch of Echo rods and Simms wading gear on closeout this month should you be in need of some retail therapy or simply want an awesome new fly rod or waders that don’t leak. If you really need something to look forward to, consider joining me on a trip to the Yucatan in Mexico at the end of February for world class bonefish, permit, tarpon and snook. Email me or call the shop for details if interested. I have a couple of open spots 2/19-2/26.

November brings more coho, bull trout, perhaps some chum salmon and hopefully a couple of lake re-openings for some late fall trout action. It’s certainly not shorts and sandal weather any longer but you can still pile on an extra layer or two and get your fishing fix! 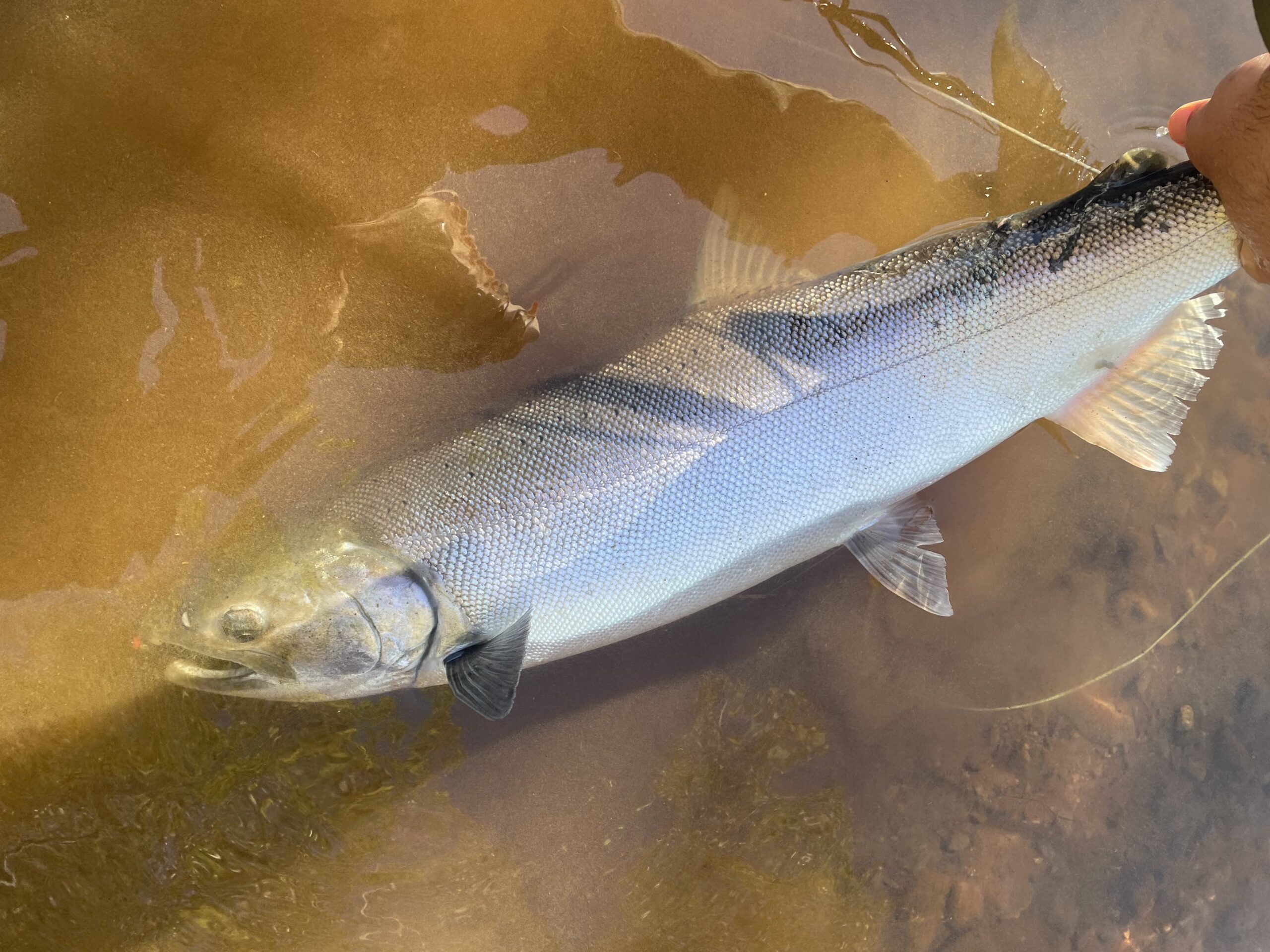 Rivers
With our recent flush of rain, most rivers are full and the coho salmon continue to move upriver. The coho numbers this year are pretty solid from the Nooksack to the Skagit and we can expect new fish to continue showing up throughout the month. Coho retention has been extended on the Skagit and Cascade Rivers through the end of November. Check the WDFW emergency rules for future updates. The Stillaguamish is scheduled to reopen on November 15th. Sea run cutthroat are still around as well and expect them to be somewhat distributed throughout the lower and mid-river areas. November is a good month to fish egg patterns for resident trout and bulls, or swing flies with an egg head. Everything in the river seems keyed in to that little extra splash of color this time of year as we are well into the salmon spawning season. With more rain in the equation, it’s time to break out your bigger, gaudier coho flies like Popsicles, Showgirls, Starlight Leeches and Deuce Wigalos. These will stand out and command more attention in the higher, colder and sometimes turbid flows. For coho, cast and strip presentations in slower water remain effective. When chum begin showing up, dead drifting these same flies under an indicator works incredibly well. In other good news, North Coast (Olympic Peninsula) streams have largely reopened for fishing after the much needed rain. 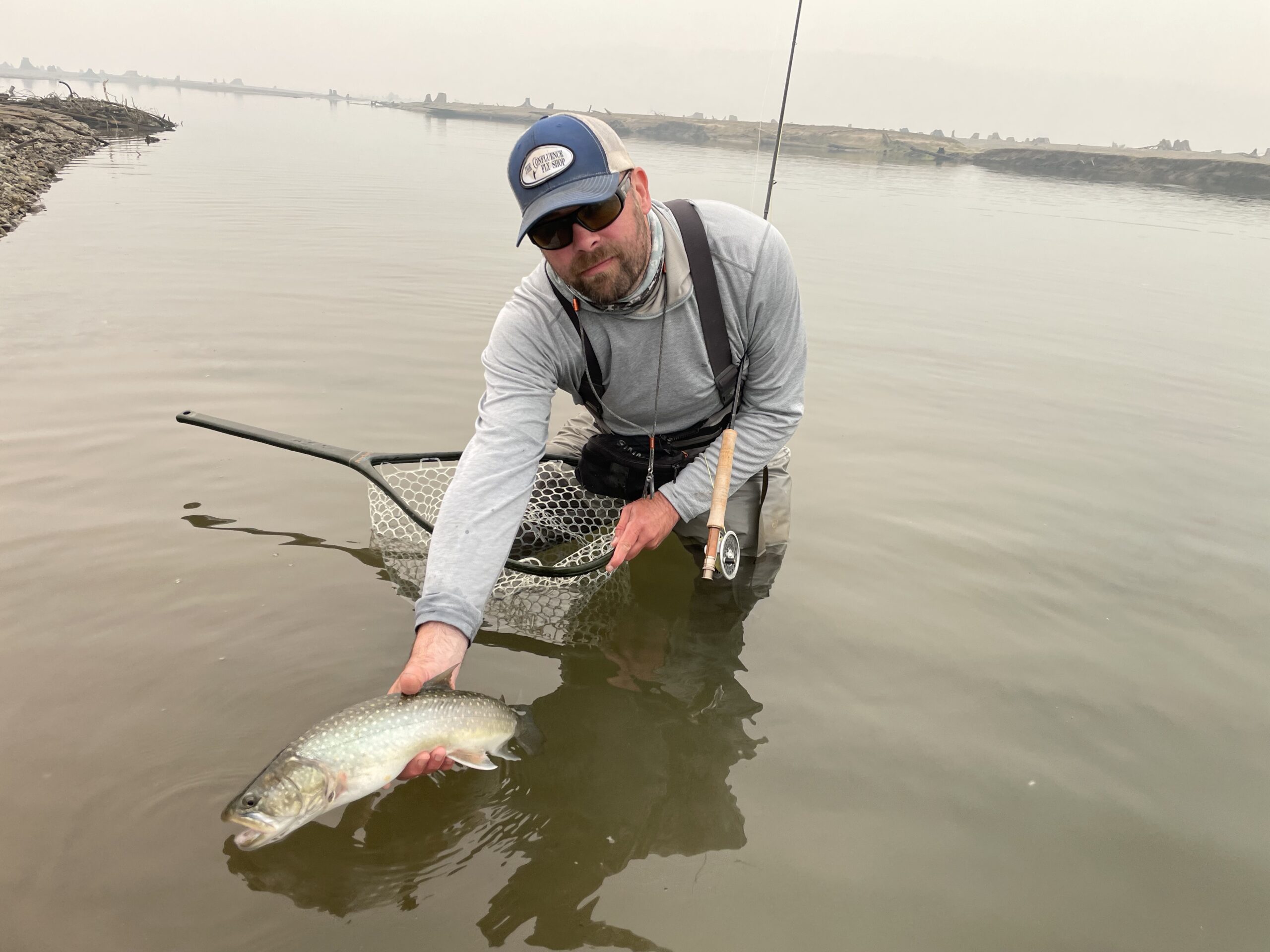 Wild winter steelhead abundance is once again forecast to be below average the Olympic Peninsula this winter, if you’d like to weigh in on how you think the fishery should be managed or simply be part of the conversation, WDFW is hosting part 2 and 3 of a virtual town hall to discuss steelhead management on November 10th and 28th. You can find more information on the meetings here. 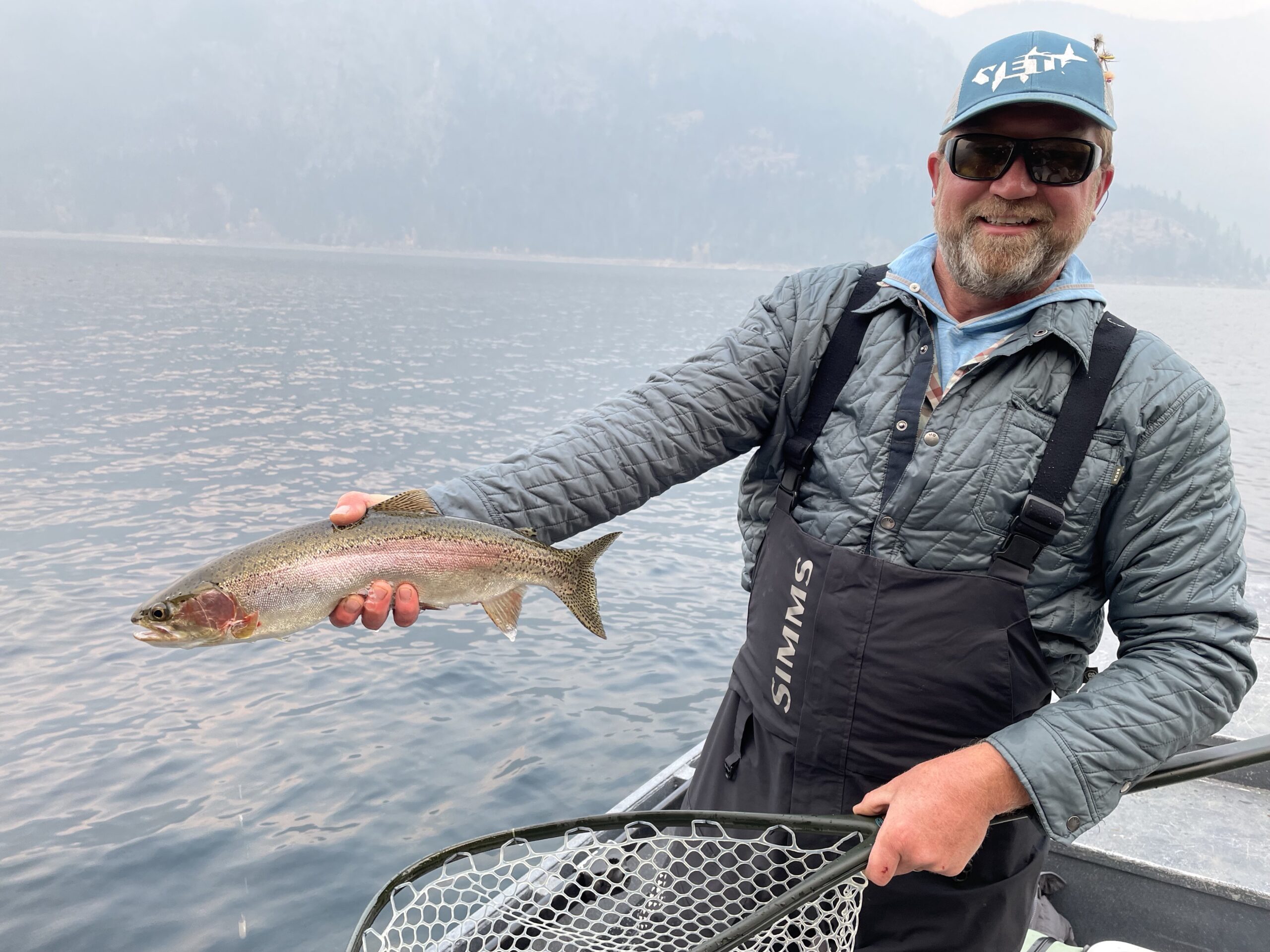 Lakes
Not much to report on the local lake scene these days with some of our late fall favorites like Pass and Lone Lakes still closed due to toxic algae levels. Let’s hope that between the rain and colder weather the levels continue to decline and we can get back out there soon. We get calls daily asking about the status of these fisheries. You can check the Department of Ecology site for the latest readings. Rest assured that once the algae abundance reaches an acceptable level the lakes should reopen. In the meantime, keep filling your boxes with small minnow patterns, bloodworms, Blobs, Boobies and all the other flies that really come into their own in the cooler months. Squalicum Lake is still open, though we’ve not had any recent reports. Fish it and let us know! 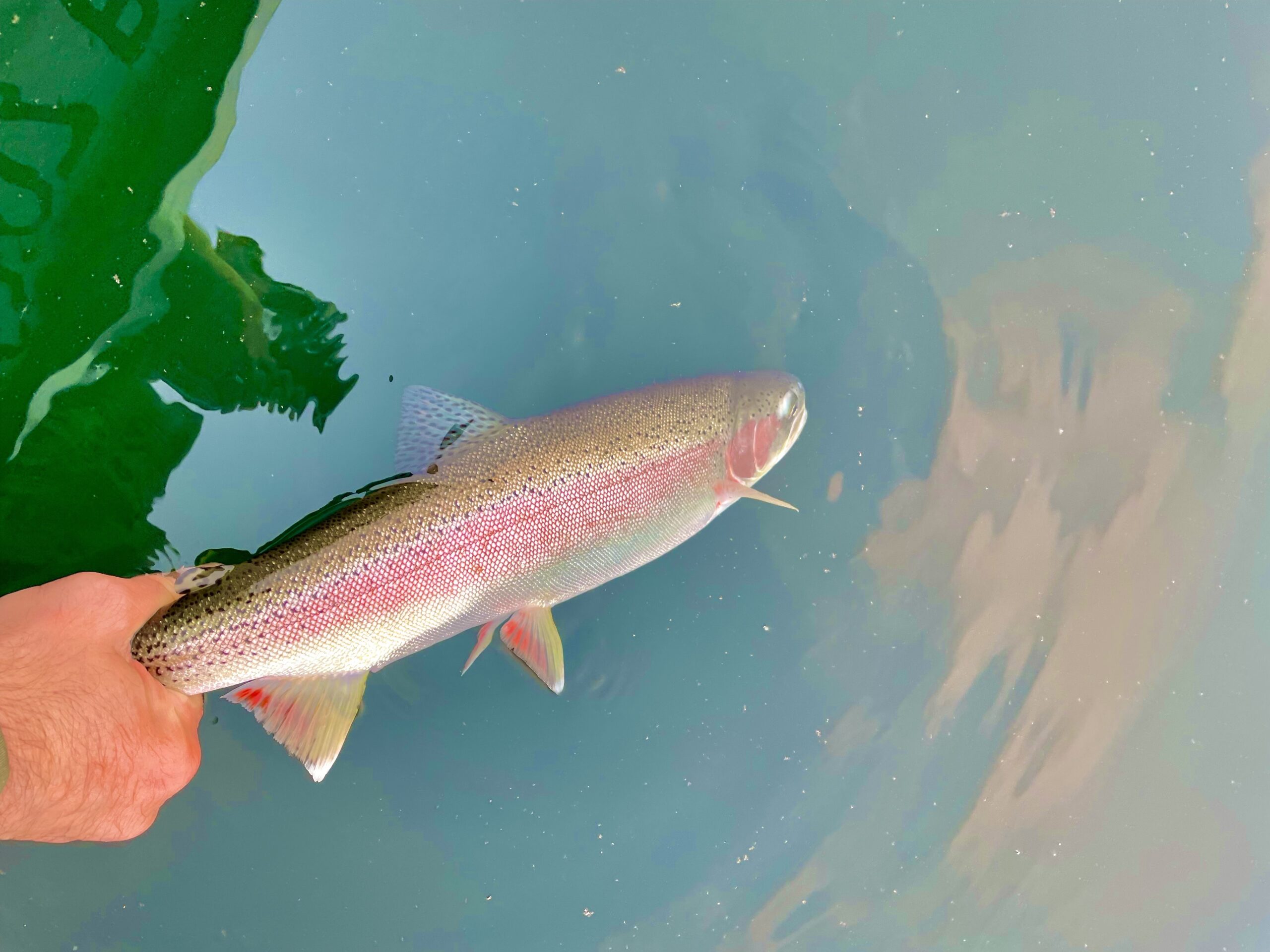 Beaches
Local beaches are pretty slow for cutthroat this time of year. Explore further south in the Sound with Reverse Spiders, Conehead Squid and other attractor patterns where you’ll find bigger winter cutthroat populations. Most of our cutthroat are up in the rivers this time of year in the North Sound. 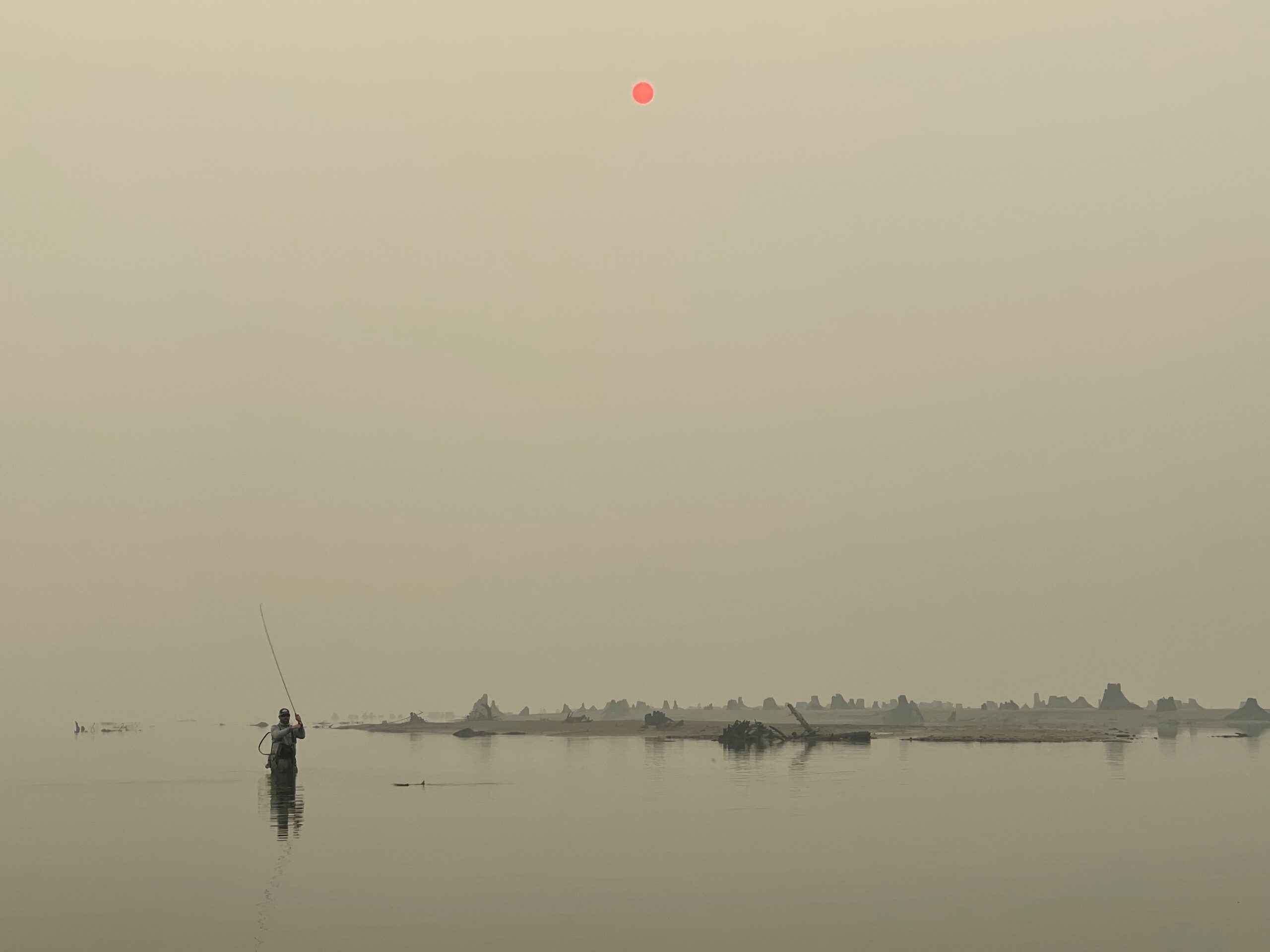