“The two best times to fish is when it’s rainin’ and when it ain’t.”
~ Patrick F. McManus

Truer words have never been spoken as we sidle into the thick of fall. It’s nice to see some moisture back in the equation after a long dry summer. Looking at the extended forecast, we have more rainfall expected in the coming week, which should inspire more coho and the first good pods of chum salmon to push their way upstream. Trout fishing remains pretty decent on both sides of the mountains and should continue through the month until the season closes on many waters, the weather shuts things down or both. Whatever you choose to do, October in the Northwest may well be the most beautiful time to hit the water. Maples and cottonwoods are vibrantly ablaze with color, the hill tops dusted with snow and the air is cool, familiarly musty and dank. There are lots of options out there from salmon to trout and char, even steelhead if you’re up for a good drive north or east. Carve out some time to go enjoy it while the weather and conditions are still seasonably pleasant, it only gets colder and wetter from here on out! Also on the news front, the WDFW is in the midst of a sport fishing rule simplification process and is accepting public comment through November 30th. Please take the time to review the proposed changes here and make your voice heard. Most of the proposed changes appear to be worthwhile, but there are some questionable changes worth commenting on as well, like the proposal to eliminate a provision that states all trout caught when fishing with bait are counted as part of the daily limit whether kept or released. It’s safe to assume that most of us on fully on board with simplified fishing regulations in Washington (the millions of trees that die each year to construct this lofty tome included), but let’s make sure we’re getting it right. 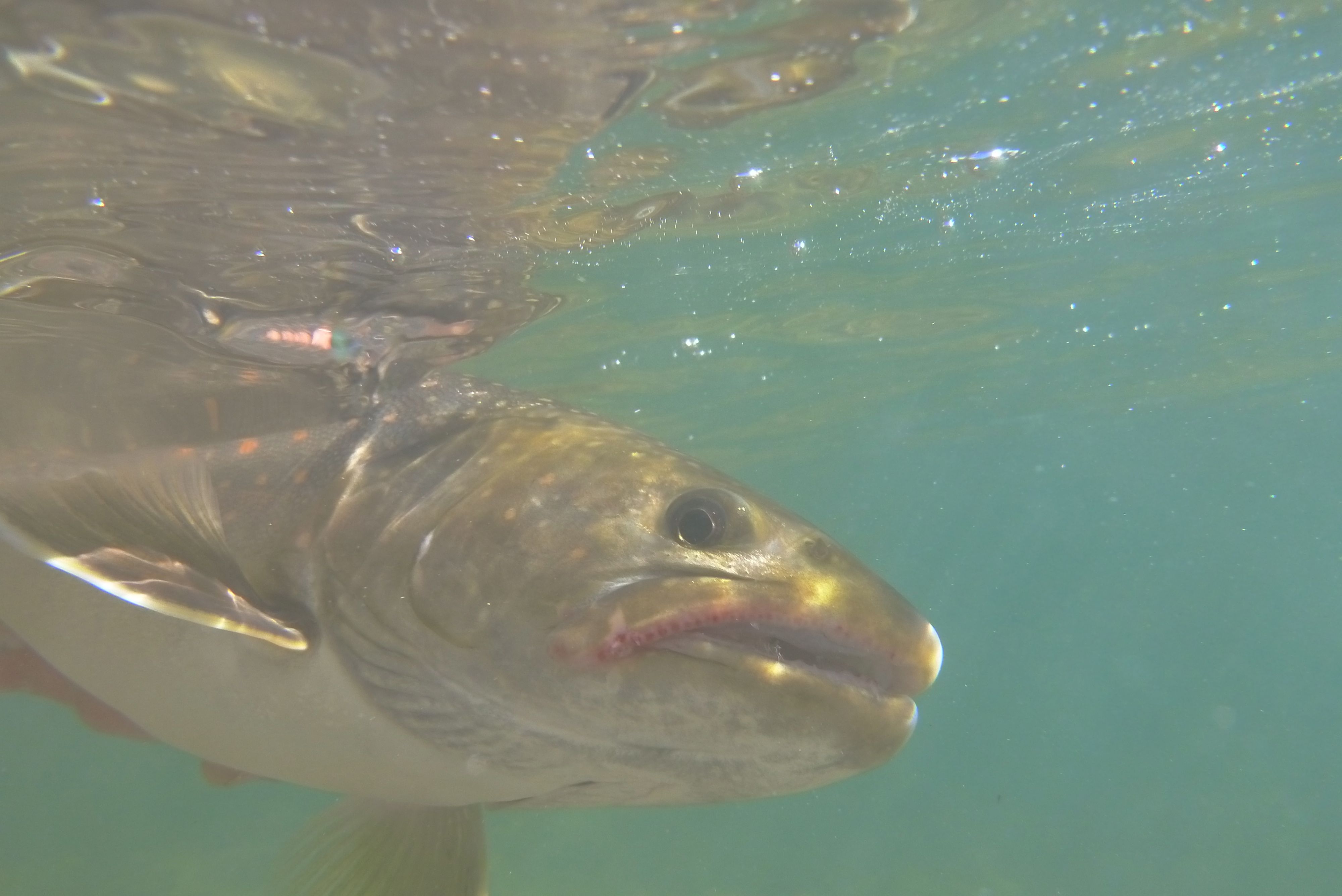 Rivers
Most of our rivers, including the Nooksack are in pretty good shape for the moment. You have through the end of October to enjoy the mountain creeks and open tributaries draining the western Cascades for one or two last hoorahs. October Caddis patterns like orange Stimulators are a go to for creek trout this time of year, but the Parachute Adams, Purple Haze and Royal Wulffs will continue to produce as well. Don’t be afraid to swing a small Beadhead Peacock Bugger or Squirrel Leech through some of the deeper pools out there. You’d be surprised at what you find sometimes. October is inarguably salmon time in our neck of the woods. Pinks are largely done for the season and our North Sound rivers like the Nooksack and Skykomish either closed early for pink retention or never opened in the first place. 2017 wasn’t of good year for pink salmon and in some cases even worse than expected. Let’s hope for strong survival from this year’s brood and a bolstered run over the next few pink cycles. The good news is that we have some pretty decent coho salmon options on both sides of the border. The Nooksack and Skykomish Rivers have decent coho returns this year and a good number of fish throughout the system. Look for coho numbers to build with the coming rains and bumps in the river levels. If the water is off color, bigger, bolder patterns like Starlight Leeches in purple or pink, Pixies Revenge, Popsicles, Manhattan Beaches and Candy Canes on a stripped retrieve fair well. In low clear water like we often encounter on the SF Nooksack and lower Fraser River tributaries and sloughs, more subtle patterns like Rolled Muddlers in gold, blue, pink, olive or chartreuse, chartreuse or blue California Neils, white, copper or red Coho Buggers and the old reliable Green Blob or Copper Blob work much better. Floating or intermediate lines on 7 or 8 weight rods are our go to set ups for this fishery. Concentrate on finding fish in back sloughs, around woody debris in slow or non-moving water. These will be holding fish and generally more grabby than those moving upriver in faster water. The Vedder and Harrison north of the border are beginning to see some coho. The north side tributaries to the Fraser generally see fish showing up a little later in October and into November. This remains one of our favorite fisheries for the year. BC chum also show up in October from the Squamish to the Vedder and can be a ton of fun on an 8 wt. These tiger striped, toothy critters can really pull. Egg Sucking Leeches and Marabou Patterns in purple and pink or chartreuse work well for chum. Next year the recreational angler needs to be make a strong showing during the North of Falcon season setting process if we want to have more rivers open for the 2018 season, we’d have solid summer steelhead on the Stilly and even better sea run cutthroat fishing on the Stilly and Skagit right now were these major river systems not closed this year. Stay tuned for more info from us on the public comment period for North of Falcon. 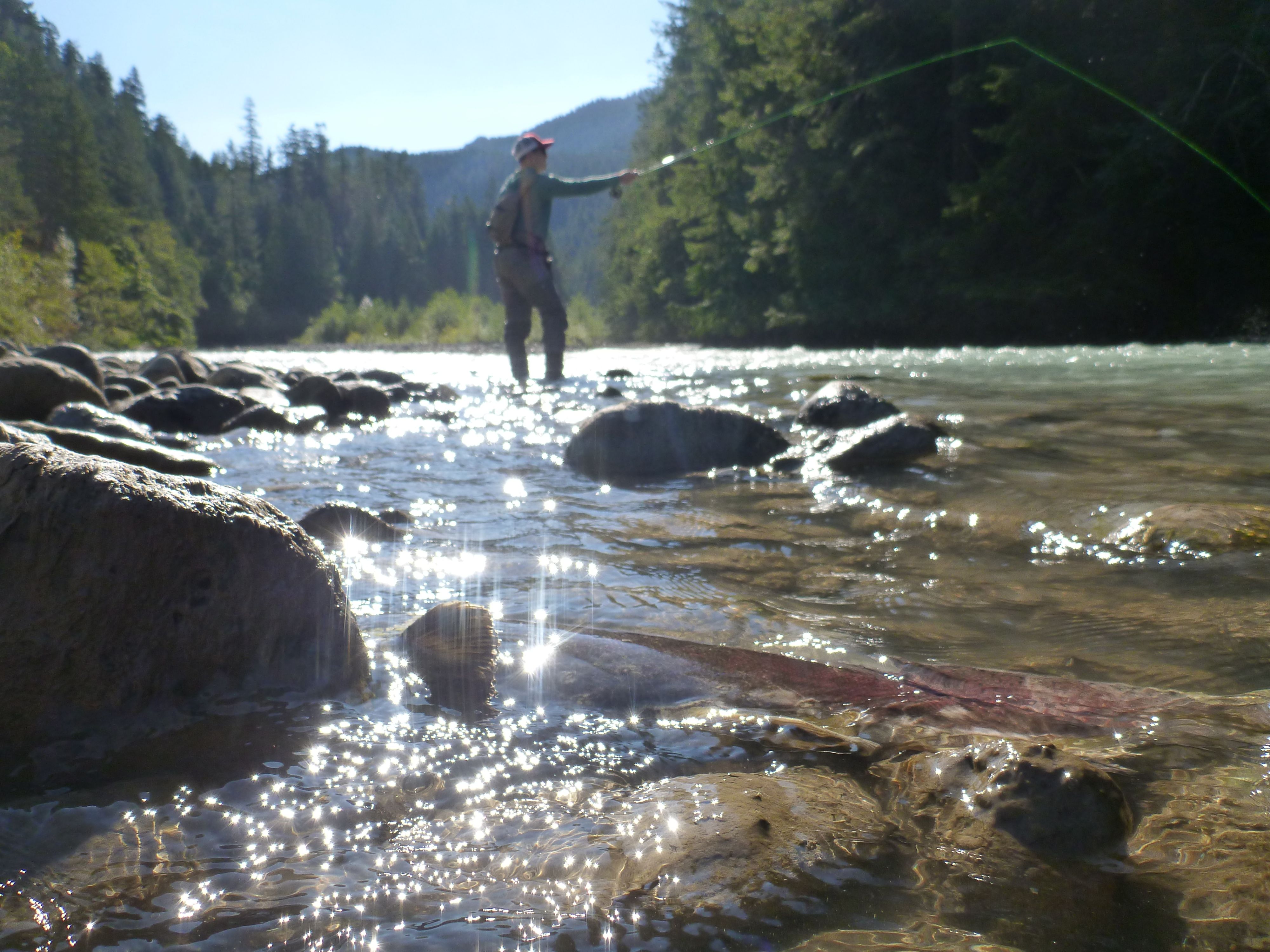 Lakes
Many of our lowland lakes are slated to close at the end of October. Even those that remain open tend to slow way down as we move into the colder weather patterns of November and December. The time is now. Squalicum and Pass have been fishing well and we’ve had a number of productive reports coming in from eastside lakes in the North Central region of Washington. Fall staple patterns like leeches, baitfish imitations, bloodworms and scuds having been producing. Most lakes don’t see the hatch activity you’ll find in the spring and early summer by this point in the year so stick with patterns that imitate year round food sources. This is one of our favorite times to target the big browns in Pass Lake using streamer tactics. White Zonkers, Dude Friendly’s, Cone Head Double Bunnies in Olive, Natural or Platte River Special work well as the brown target the lake’s forage fish aggressively. If you want to visit your favorite high country haunt, you’d better get that trip on the roster as we’ve already seen our first snows up yonder. Go prepared as the weather can change really quickly. October is one of the best months to fish Ross Lake as well, with big wild rainbows feeding recklessly through the fall before a long cold winter. Marabou Clousers, Deceivers, Dude Friendly’s, Thin Mints and Olive Zonkers on type 6 full sinking lines worked near the rocky shorelines is your recommended game plan. You can certainly troll to locate fish, but casting and retrieving flies tight to the shore can be really productive as the water cools off and trout become very comfortable moving along the shallow edge. 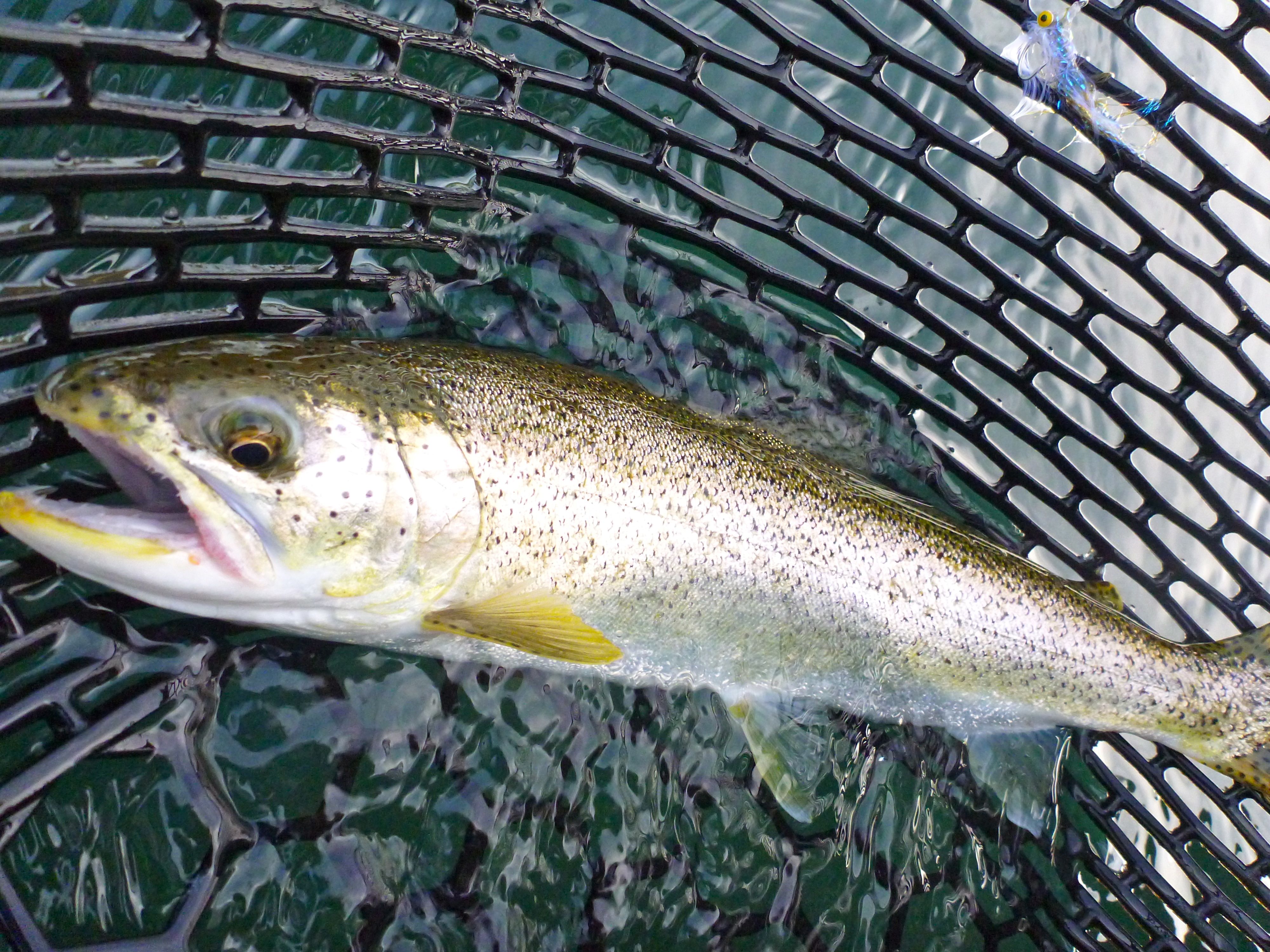 Saltwater
Not many saltwater salmon options remain in the Sound, at least close to home, but the cutthroat fishing can be pretty darn good this time of year, especially in Hood Canal. I had the recent pleasure of spending a day a-float on the Canal with Capt. Colin Flanagan from Flanagan Fly Fishing. We had one of those exceptional days where we found happy hungry cutthroat in big schools feeding with wild abandon. We caught cutthroat on Conehead Squid in white or olive, olive/white or chartreuse/white Marabou Clousers, a plethora of odds and ends and then capped off the day by twitching rusty brown Chubby Chernobyls on the surface for termite feeding trout in the salt. Of course, not all trips are wrought with multiple double headers, back to back fish on successive casts, flat seas and willing cutts in every depression and behind every rock, but we sure do look forward to the ones that do. While cutts are still feeding on sand lance, small herring, krill and the like, fall is a fine time to break out the attractor patterns like Reverse Spiders and Mickey Finns, which can be particularly effective this time of year. Should you find staging coho hanging out in an estuary, they will frequently take these patterns as well. 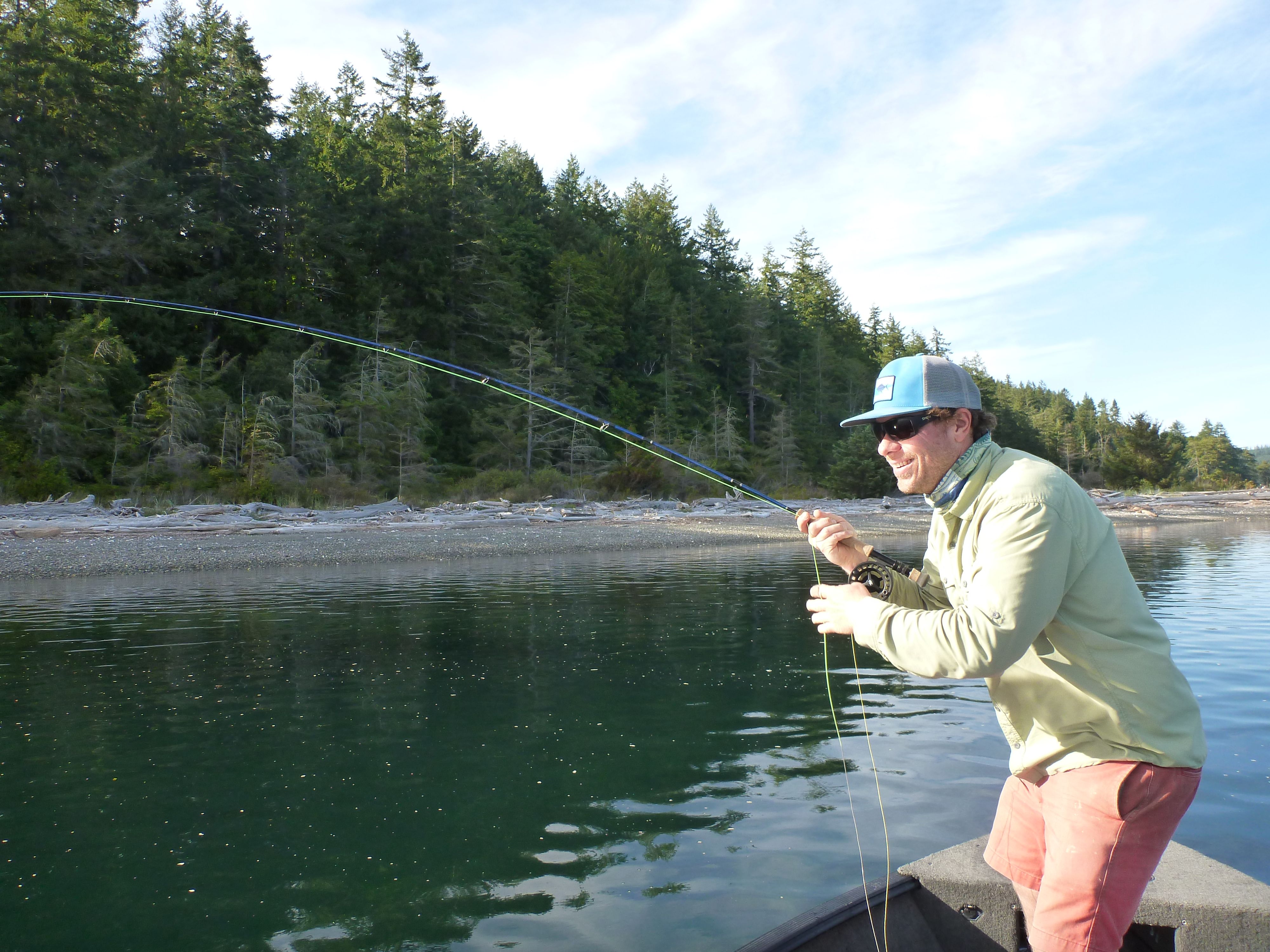