Here we are, early October and we’re still donning shorts and sandals, daring to wet wade and sweating beneath the mid-day sun as it barrels into the 70’s. Autumn 2022 is taking shape as the antithesis of last year’s relentless monsoons and while I’m not quite ready to see it go, I’ll concede that our dusty forests, parched earth and shrunken rivers could all use a good hearty drink of rain in the near future. I can’t remember the last time I saw so many of our streams quite as low as they are now and though water temps in the western Cascades foothills are still reasonably cool, our fall migrating salmon could use a bump in water in most places to help them on their way. I imagine their reaction to excessively low water is much like ours when we see southbound I-5 constricted down to one lane. It sucks. Despite the conditions, the salmon are coming (their biological clocks not giving them a whole lot of choice in the matter) and we are seeing good numbers of coho ascending most of our area rivers. 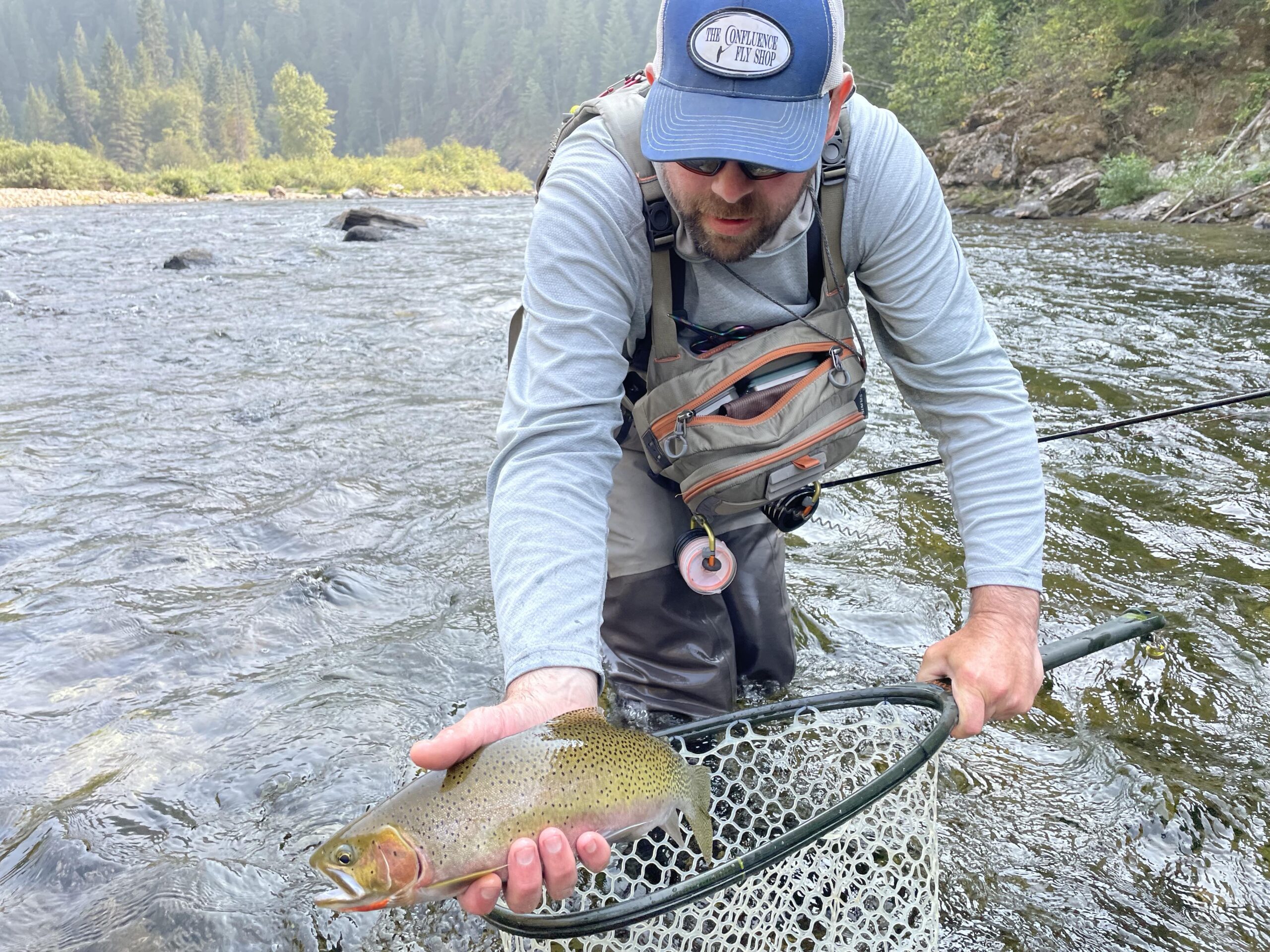 While my June and July were pretty bass-centric, September and early October have been all about cutthroat trout. I had the good fortune to trek over to the Idaho panhandle with a few good friends to land myself in west slope heaven for a handful of days. Big golden cutthroat smashing October Caddis and hoppers much of the day, sipping Mahogany duns as the late summer sun dwindled into dusk. We were even gifted some days of bluebird skies and warm afternoons after driving through a dense cloud of suffocating fire smoke all the way from Snoqualmie Pass to Superior, MT. Maybe sometimes the optimism pays off, maybe we just get lucky now and again but it was one of those trips I’ll be reflecting on fondly come a cold damp December day a few months from now. Here on this side of the Cascades it’s the coastal cutthroat that holds me captive and their quick sharp strikes at my fly from out behind the log. They are equally as beautiful as the west slopes. I had the pleasure of talking Skagit cutthroat among other things with Dave Stewart on the Wet Fly Swing Fishing Podcast recently, check out episode 365. That was a really great experience and an honor to participate on a show I listen to regularly.

Things around the shop have been pleasantly busy over the last month. It’s nice to see others out enjoying the fine weather and extended summer. I think we all collectively remember how abruptly the summer ended last year and are taking advantage of the opportunity to savor a few more fishing trips before the Gore-tex and synthetic down jackets must enter into the mix. We have a bunch of great events lining up for this month and next, so even if the elements perform a sudden about face, you’ll have something remotely fishy to turn to. We’re kicking off our fall open tying sessions in partnership with the North Sound Chapter of Trout Unlimited at Brandywine Kitchen on October 12th. The Fourth Corner Fly Fishers have their Conservation Auction coming up shortly, and we’re excited to be co-hosting the International Fly Fishing Film Festival (IF4) at the Lincoln Theatre in Mount Vernon on November 17th. You can get tickets at the Confluence or purchase them directly from the theatre. In the meantime, we hope to see you around the shop and on the water reveling in what is arguably one of our favorite months of the year. 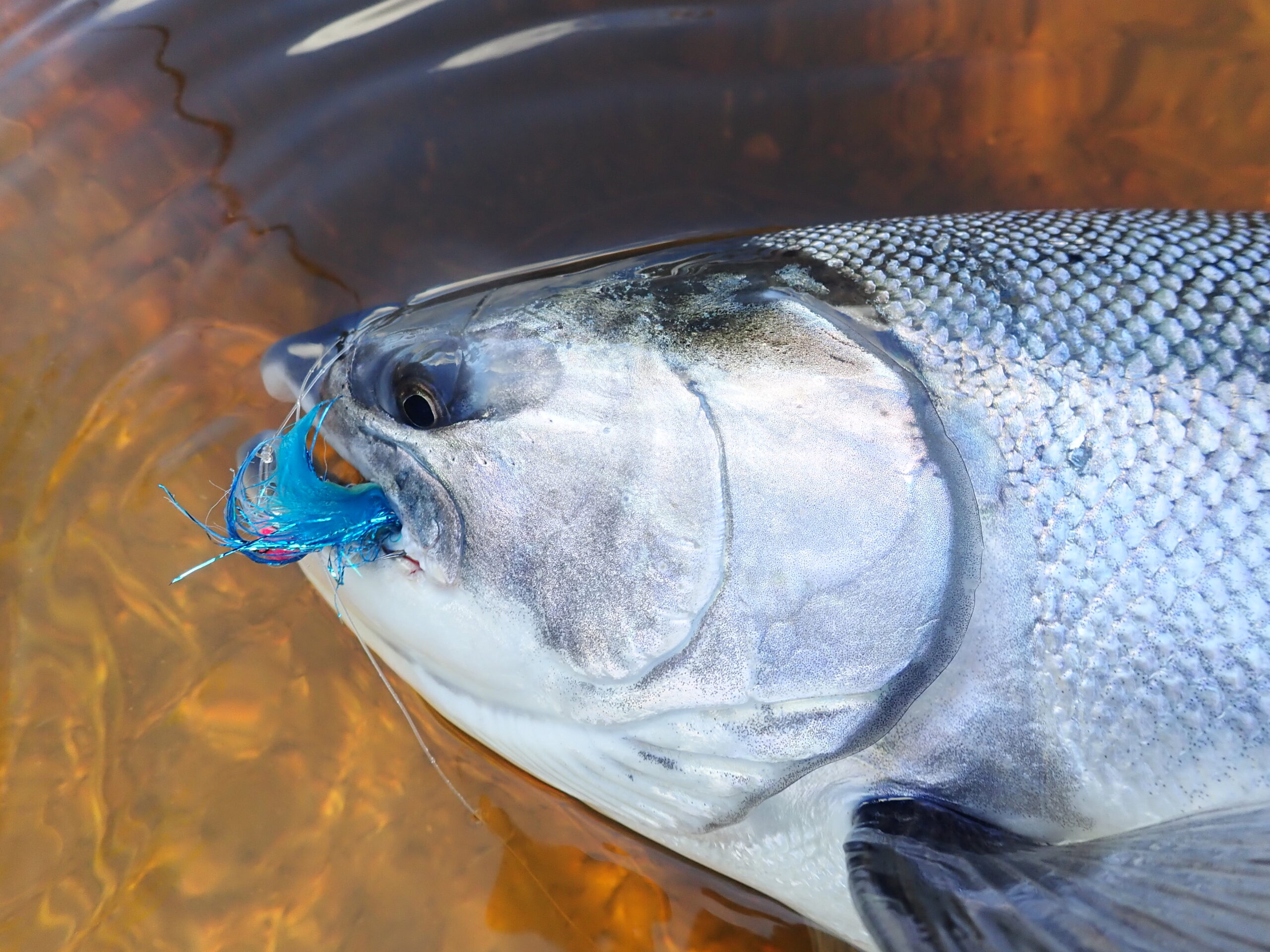 Rivers
We still have through the end of October on most trout streams and though the water is pretty low in places, trout are getting their fall feed on and the good dry fly fishing remains intact for the moment from the Yakima to the mountain streams draining the western Cascades. Good fall dries to have on hand are Foam Cranes, Foam Run Caddis or Slick Water Caddis in orange, Orange Stimulators, Blue Winged Olives, Mahogany Duns and various midge patterns. On the subsurface front, soft hackles, Zebra Midges, Baetis Nymphs and Mop Flies have been working well. It’s not uncommon to find trout suspended mid-water column this time of year and hedging their bets to take big bugs like October Caddis or pick off mayfly emergers. The dry fly rig with a shallow dropper nymph is an effective strategy for the time being until the weather really starts cooling off. If fishing trout and char in rivers with salmon runs, small egg patterns can also be deadly. I recently found myself on a stretch of local river with piles of rotting, maggot infested chinook carcasses lining the banks. Everything from whitefish to resident rainbows was on the lookout for an easy egg after a frenzy of salmon spawning. 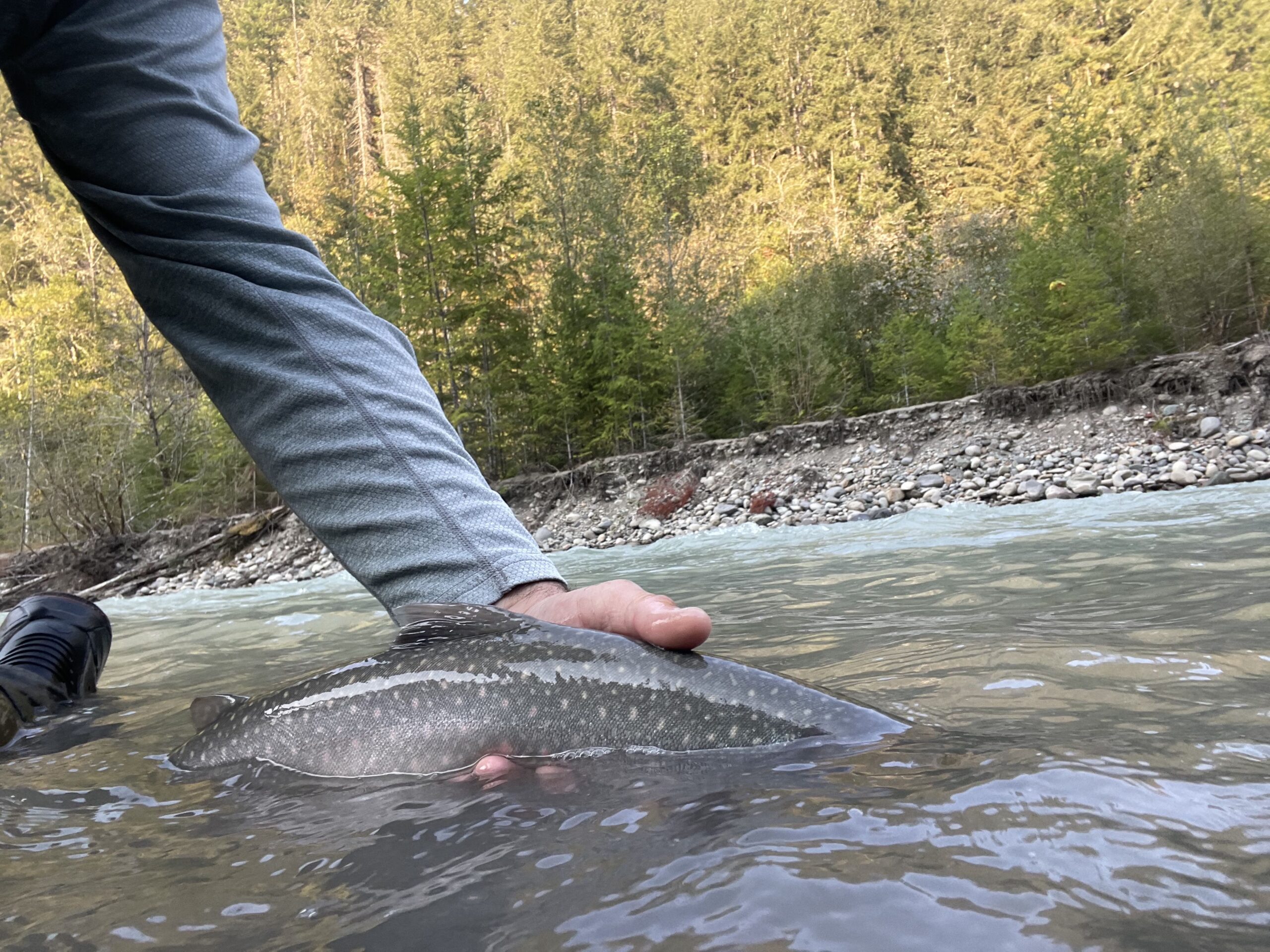 As for salmon, there seems to be no shortage of coho in the Nooksack, Skagit and Stilly this fall. The bad news is that the Stilly, including the main and both forks is currently closed due to concerns about impacts to ESA listed chinook in the system and too many incidental encounters. It’s currently set to reopen 11/15, which eliminates a pretty good chunk of our sea run cutthroat and coho opportunity on the river. There has got to be a better way to manage our rivers to safeguard our weakest salmon stocks while still providing some level of angling opportunity. I would encourage you to express any frustrations with this management decision during the North of Falcon public comment period for 2023. Complete closures like this seem to happen more and more frequently these days. The good news is that the Skagit, which had been closed for a portion of September due to the same concerns, is open once again, save for short term sectional closures for tribal netting. All in all, the coho fishing has been decent, though with low clear water in many places and water temps still on the warmer side for this time of year, the coho have not been overly grabby. Fish early and late, size down your flies and hope that some cooler, grayer days are on the horizon. The SF Nooksack opened October 1st for coho and while the same, difficult water conditions prevail, the brunt of the Nooksack coho are heading that direction and the water clarity is considerably better than on the rest of the system.

Sea run cutthroat fishing has been really good lately. Find the wood and all is good. The stump and tree ladenlower Skagit down into the forks is producing some nice cutthroat on Rolled Muddlers, Spiders, Flash Flies, Hot Head Buggers and small minnow patterns. Buy extra flies…you’re going to lose a few fishing close to all that woody structure. 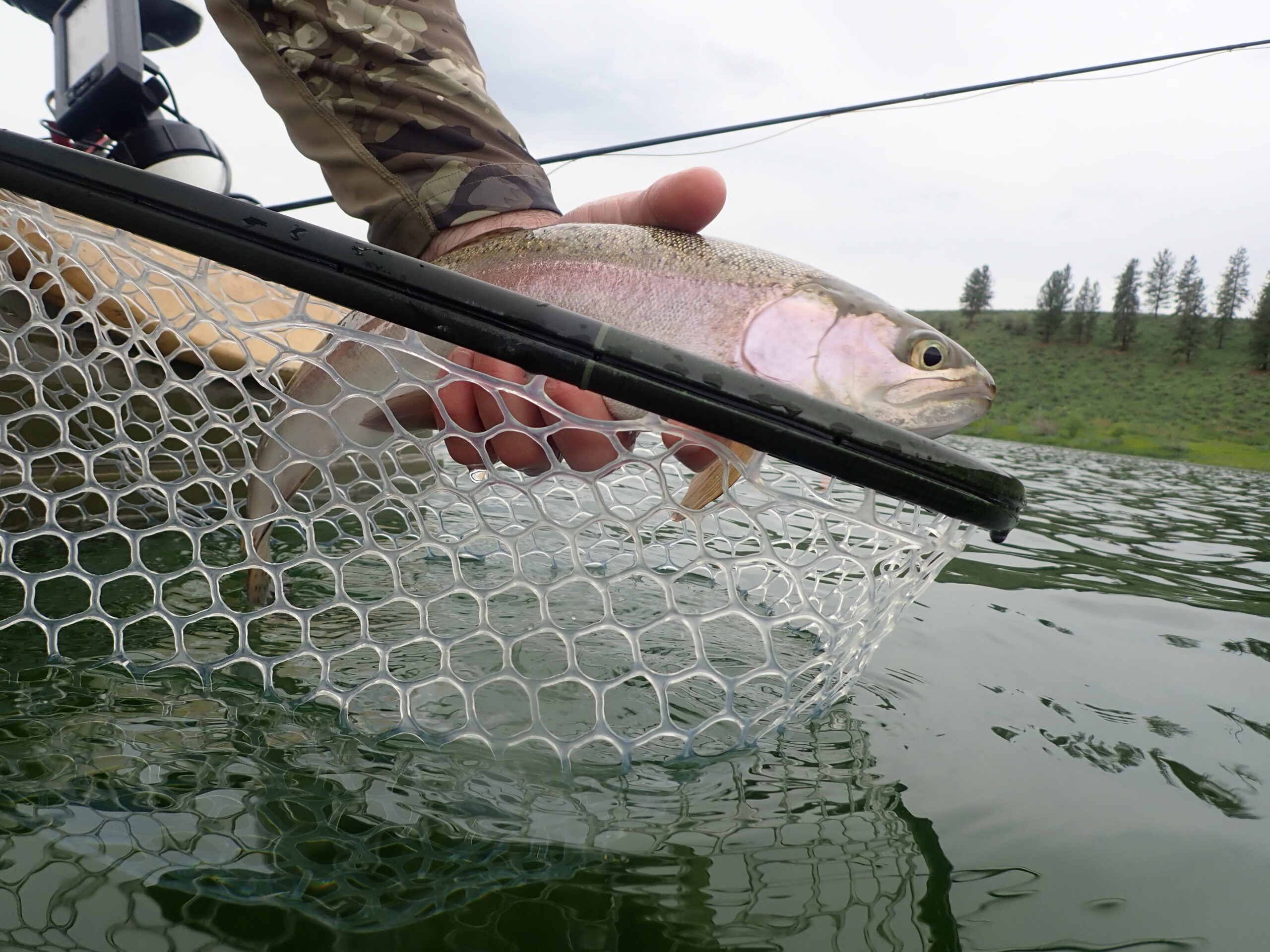 Lakes
Lakes are finally beginning to cool off and it’s a great time to get back out there after a long hot summer. We’ve had several good reports from Chopaka and Big Twin Lakes on the east side, and local lakes like Squalicum and Lone are beginning to fish well again with small chironomids, blobs, bloodworms and mini leeches. Unfortunately, Pass Lake remains closed due to a toxic algae bloom. You can check for lake status updates on the State Park website. Once it opens, fishing small minnow and streamer patterns around the weed beds can be awesome and this fishery usually continues into early December. 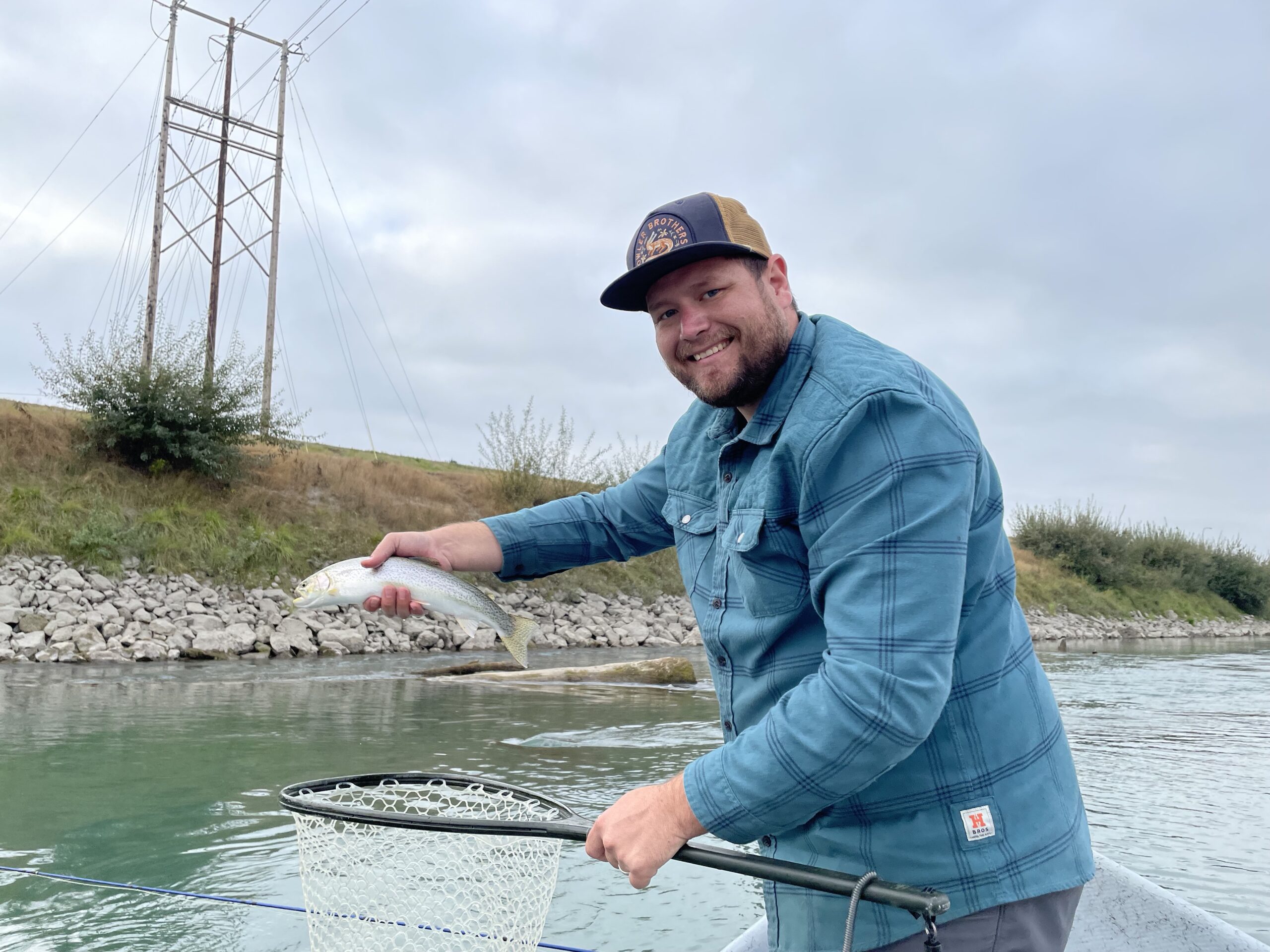 Beaches
Most of our local cutthroat are heading into the big rivers, but South Sound and Hood Canal fish well throughout the fall and into winter. Fall can be a great time to throw attractor patterns like pink/chartreuse Clousers or Just Keep Swimming flies in bright colors for aggressive cutts. The saltwater coho fishery in Area 9 closed September 25th. This year was similar to last for the most part in that our northern rivers seem to be getting plenty of coho but the fish didn’t really move consistently along the beaches and the beach/intertidal fishing along Whidbey Island was somewhat spotty. We’ll give it another go next year! 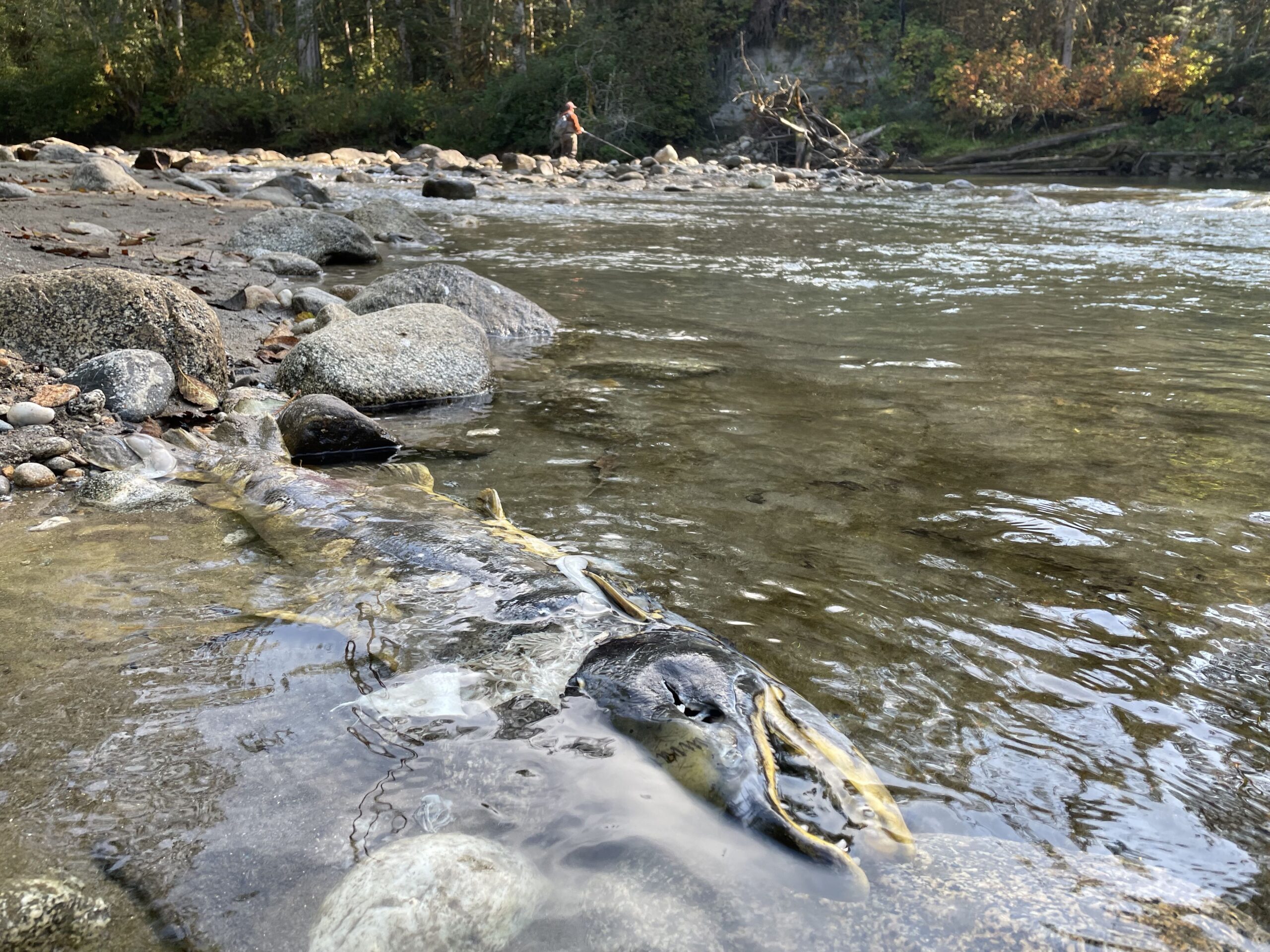