Fishing trips…they are the stitches that piece meal the year together, mark the seasons, mentally get you from A to B during a busy work stretch, motivate you at the tying bench and 100% feed the soul. I’ll take any opportunity to fish, be it a couple of hours before work or a rainy Sunday afternoon when everyone else is watching football and eating nachos. I think of it as maintenance, but it’s the trips that really give you a complete overhaul. Time with friends in a new or familiar place, time to let yourself get into the zone and figure things out. The trips get brought up and talked about sometimes decades down the road.

I just got back from some time in Southeast Alaska, as did Brandon about a week apart. We went to a place I’ve been for several years and the coho fishing is usually varying degrees of awesome in September. This year was extra special, maybe because the catching was notably better than the last couple of visits or because we didn’t go last year due to Covid. Whatever the reason, it was sure nice to be back on some familiar water in wild country where the bear tracks out-numbered those of other anglers and the salmon were large, plentiful and willing. 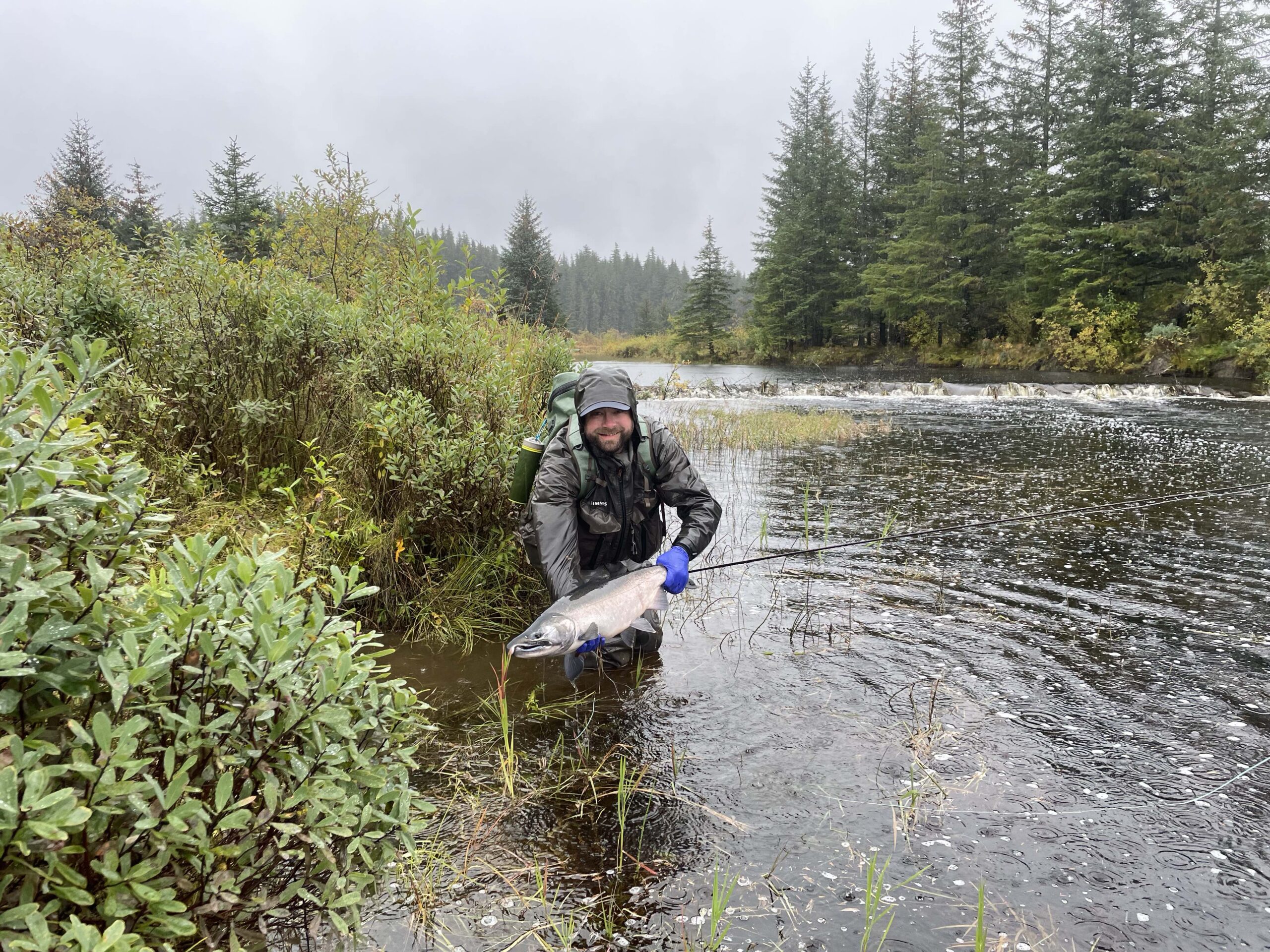 When you travel some distance to chase anadromous fish there are always some uncertainties to consider. Are the fish in? Is the run over? What will the water conditions be? Is the river going to be in shape? We’ve had the good fortune of really getting to know this little piece of geography in Alaska, so when Mother Nature throws her best curveball and dumps a few inches of rain all of a sudden, you might still knock it out of the park if you know where to go when your favorite river is rising quickly and running a foamy brown. Having fishing friends that are as overzealously optimistic about catching fish as you are is another hot commodity. I appreciate fishing with folks that have the ability to quickly move beyond the ominous signs of a jinxed trip like stepping in a giant pile of dog poop with both shoes before even getting into your waders. Go out and get after it. That stuff washes off with a little effort. 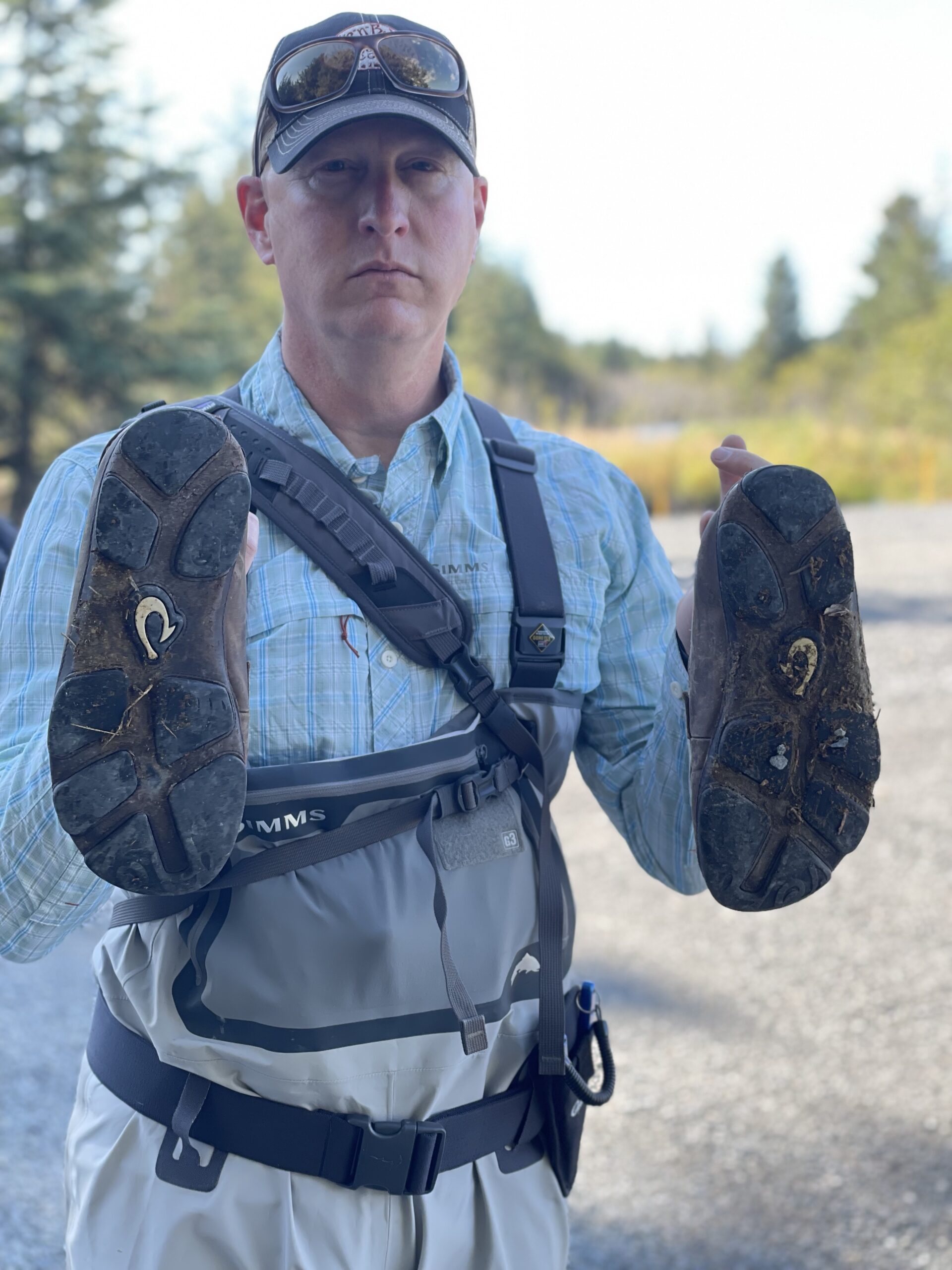 I guess we all deal with the same stuff at home too, especially this time of year. The water is perfect one day with fish rolling at every bend and then it pours for a week and fish disappear into the high water. This fall seems like it will be particularly challenging to overlap favorable water conditions with the free time you just happen to have available to you. The good news is that there are lots of options and if you choose to be flexible about where you fish or what you fish for, you can find enjoyment and success on all but the worst of days. Fall in the western Washington is most definitely salmon-centric, but there are lots of other productive fisheries worth keeping in sight. It’s been one of the better pink salmon years on record and an opportunity for many folks to get their first salmon (first several) on a fly. The humpies are slowly winding down, with fresh coho filling the voids they leave behind. Sea run cutthroat are abundant in most of our rivers and getting a little easier to find as the salmon thin out. A good portion of the bull trout population is off spawning in parts unknown before re-emerging down river to pack on some weight. Trout lakes are fishing well on both sides of the mountains before the really cold weather sets in and the trout’s metabolism slows feeding activity to a crawl. The trees are stunning along the hillsides and mountains shine with a fresh blanket of snow. It is a truly lovely time to be on the water and after a hot dry summer that seemed like it might never end, the seasonal changes are refreshing.

Traffic has slowed down around the shop as people are back to work, back to school or winding down for the fair weather season. It’s a good time to stock up on tying materials for the winter or start filling the voids in your fly boxes after a busy summer. Inventory on most stuff is in pretty solid shape these days. We just restocked our Aquaseal and Waterproofing products from Gear Aid too, so if you need to patch those leaky waders or recondition the Goretex jacket we’ve got the goods. Or if you’re ready for new ones, we can certainly do that too.

Enjoy the season, carve out some time for the water with friends and find a few willing fish. We hope to see you soon, be it in the shop or on the river. 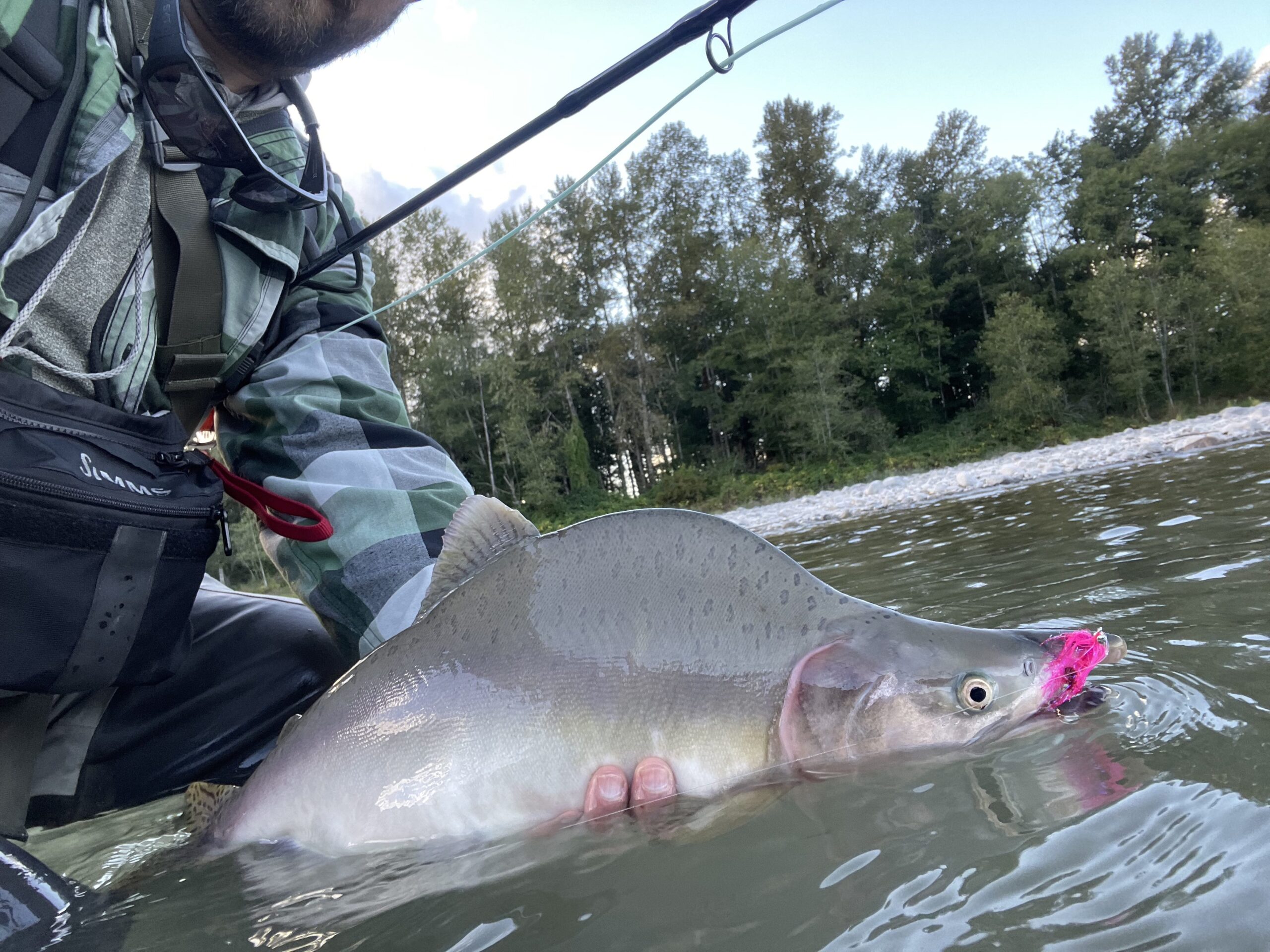 Rivers
Pinks are surprisingly still around in significant numbers, though their general condition could be described as “long in the tooth.” I find myself focusing mostly on coho and sea run cutthroat in our rivers and the name of the game some days is figuring out what color fly the grotesquely humped and darkening pink salmon won’t enthusiastically chase down and eat. The answer…I’m not entirely sure, but pink, chartreuse, white or black are definitely not it. Fortunately the pinks tend to run a bit shallower in the river than coho and cutthroat, so you can often avoid them by targeting deeper water. For coho, the Skagit and Cascade are currently open through October 24th. Keep an eye on emergency regulations as this date could be extended if the coho numbers continue to exceed expectations. The SF Nooksack opened October 1st for coho and there are plenty up there as well. The Stilly is not open for salmon but is a top pick for sea run cutthroat. We’ve got a great selection of flies for both species. In general, focus on bigger and brighter patterns for high off color water and go smaller and sparser when the water is on the low and clear side. On the horizon for next month we expect to see some chum salmon running up the Nooksack as well as more bull trout reappearing in the rivers to feed heavily after their fall spawning run. 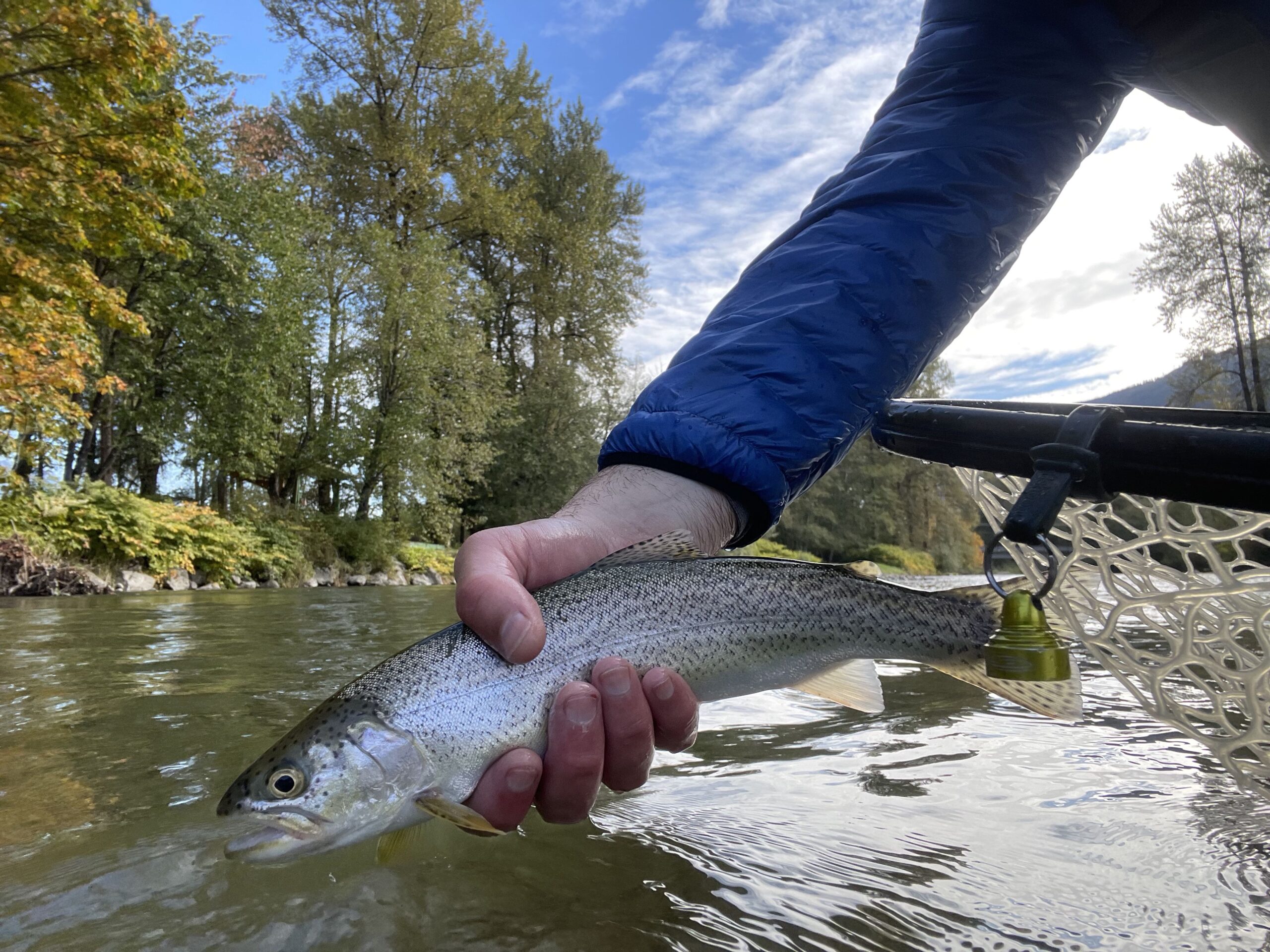 If resident trout are your focus, you’ve got a couple more weeks until the mountain creeks close at the end of the month. With the rain and cold making their presence felt, this opportunity is winding down quickly. The Yakima has been fishing well this fall and is definitely worth a visit. October caddis and Blue Winged Olives are your primary fall hatches. Nymphing tactics are always a good bet on those days the fish aren’t exactly coming to the surface. Bird of Prey Caddis, black or purple Copper Johns, black Lightning Bugs and Pheasant Tails are working well. With the low and wadeable conditions, euro nymphing tactics are also very effective. 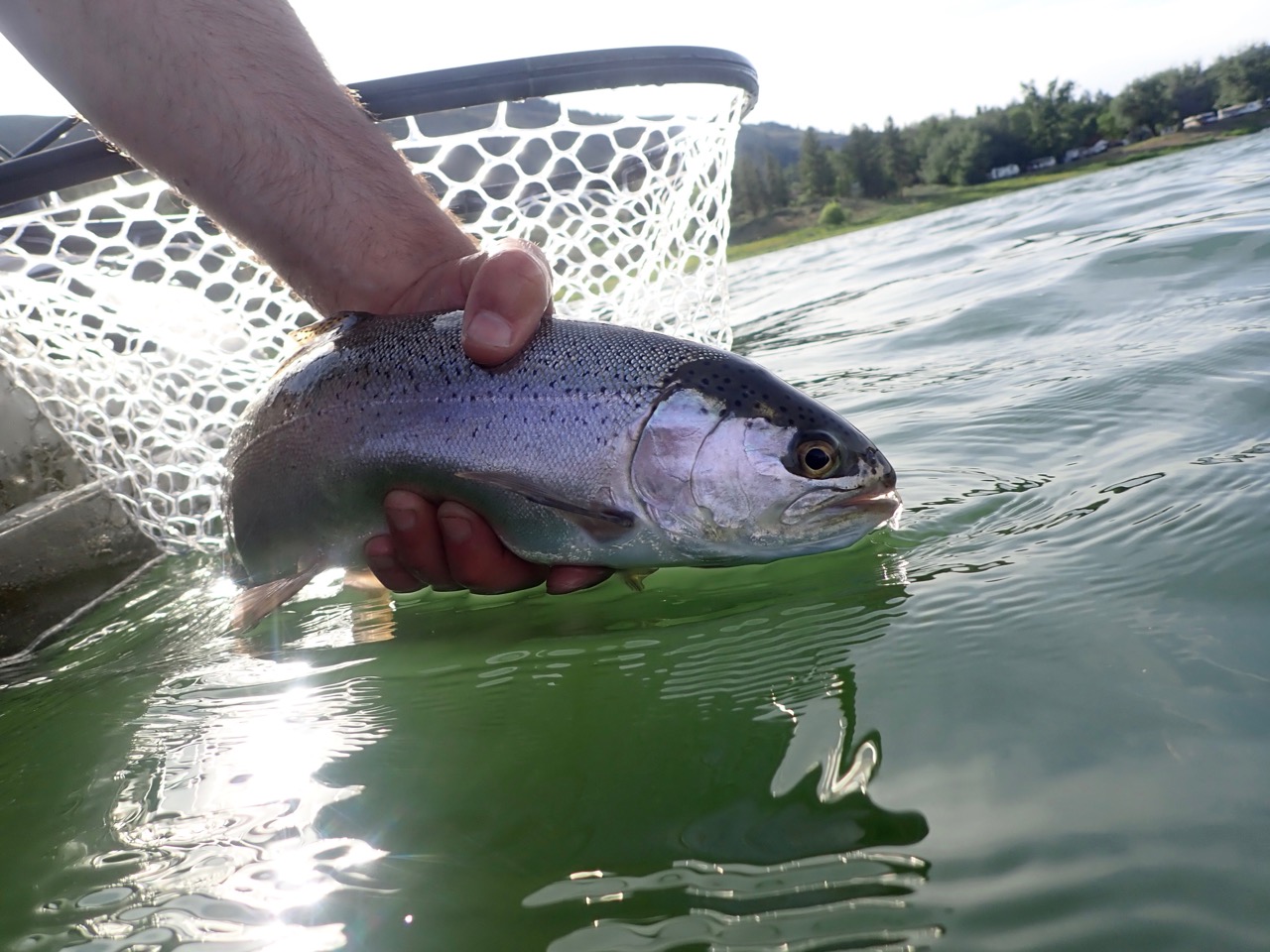 Lakes
Folks have been anxiously awaiting the reduction of a toxic algae bloom in Pass Lake and for the waters of this favorite fall fishery to reopen to public use. It’s still closed at the moment but when it opens, the typical feeding frenzy on minnows along the lake edges should be in full swing. Squalicum Lake has been fishing well as has Lone Lake on the south end of Whidbey. Smaller chironomids, white Bunny Leeches, Micro Leeches, Hot Head Buggers and Boobies have been getting it done.

Beaches
Local salmon in the salt mostly closed in September. There may be a few cutthroat still roaming the beaches in the North Sound but a lot of these fish have migrated up into the rivers and streams for the winter. 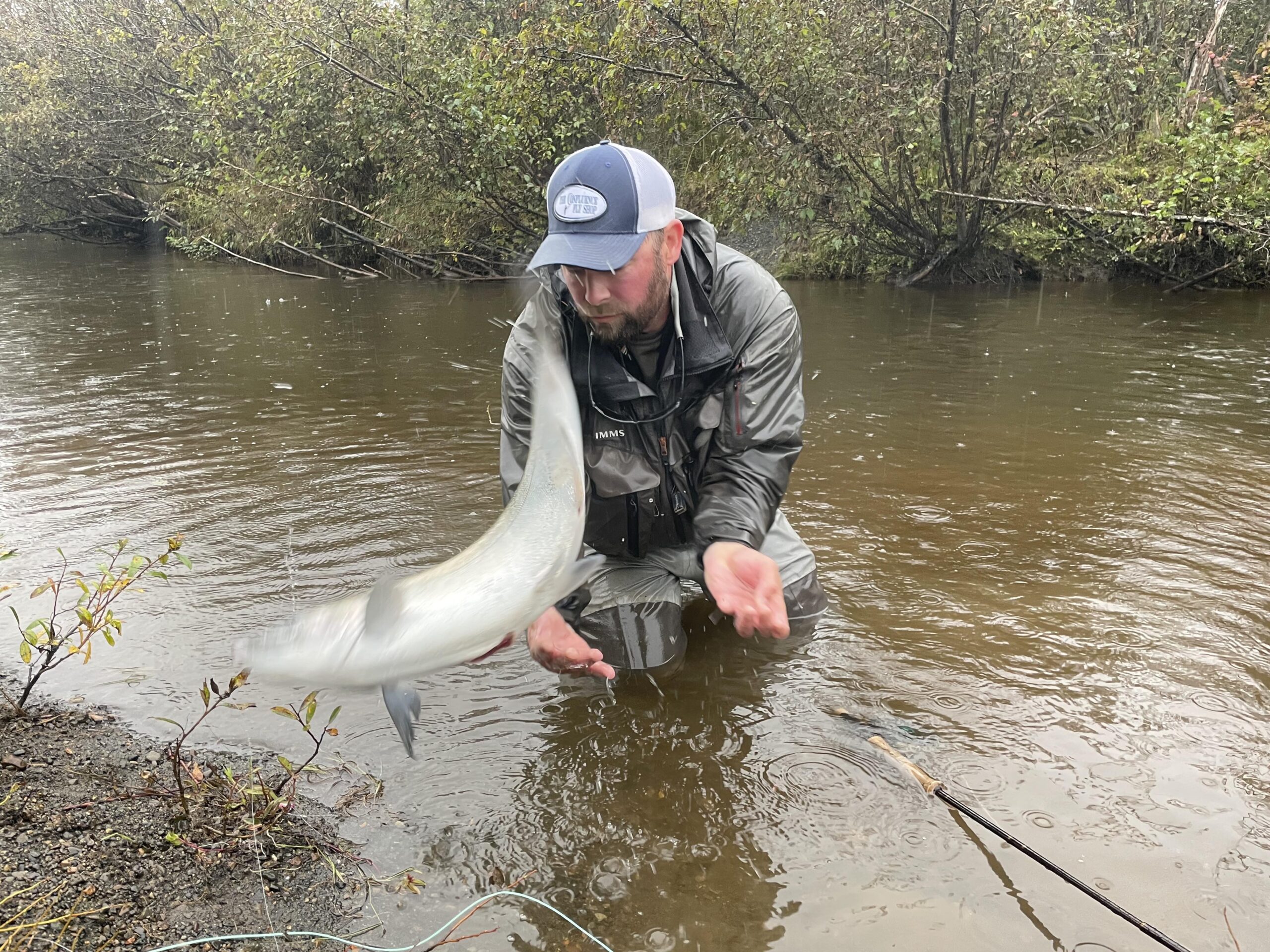