Northwestern Washington has felt more and more like living inside of a pressure cooker over the last several weeks. Sticky air, ruminating with fire smoke haze, sweaty asphalt and a strange looking sandal tan permanently emblazoned on my feet. I know it’s far worse elsewhere in the country and the world at large, but us born and bred Washington “wet siders” just aren’t used to this pervasive heat. Cloudless skies, months on end of sweltering sunshine and a near complete absence of water pouring down from overhead just isn’t part of our DNA. Lakes become ponds, rivers become creeks, creeks become a disconnected trickle, and the big old Salish Sea practically bursts with invasive Atlantic Salmon. We are strangers in a strange land. Fall can start any day now and we welcome it as the great revitalizer of all things fishy and otherwise. The ground will cease to crumble beneath our cracked feet and once again ooze refreshingly with each step, slugs will magically reappear and reign the forest floor where I will fight them picking newly sprouted chanterelles as I make my way to a favorite fishing spot. Yes, fall can happen any day now, and with a little luck will leave its seasonal kiss on our fiery landscape as we gently wave goodbye to another arid summer in the wet country. September and October, collectively known in fishing circles as Septober is about as fine a time as any to go fishing. Fish shake off the summer doldrums and delight in cooler, more comfortable water temperatures. A few more pinks, coho, and later chum will fill our rivers, though a bit less so this year. Fish that are not spawning seem to sense the next big seasonal change another few short months away. They strap on the proverbial feed bag and chow with unsurpassed fervor while the getting is good. By virtue of just being out there, this makes the getting pretty good for us too. Get out and enjoy, for the time goes by all too quickly. 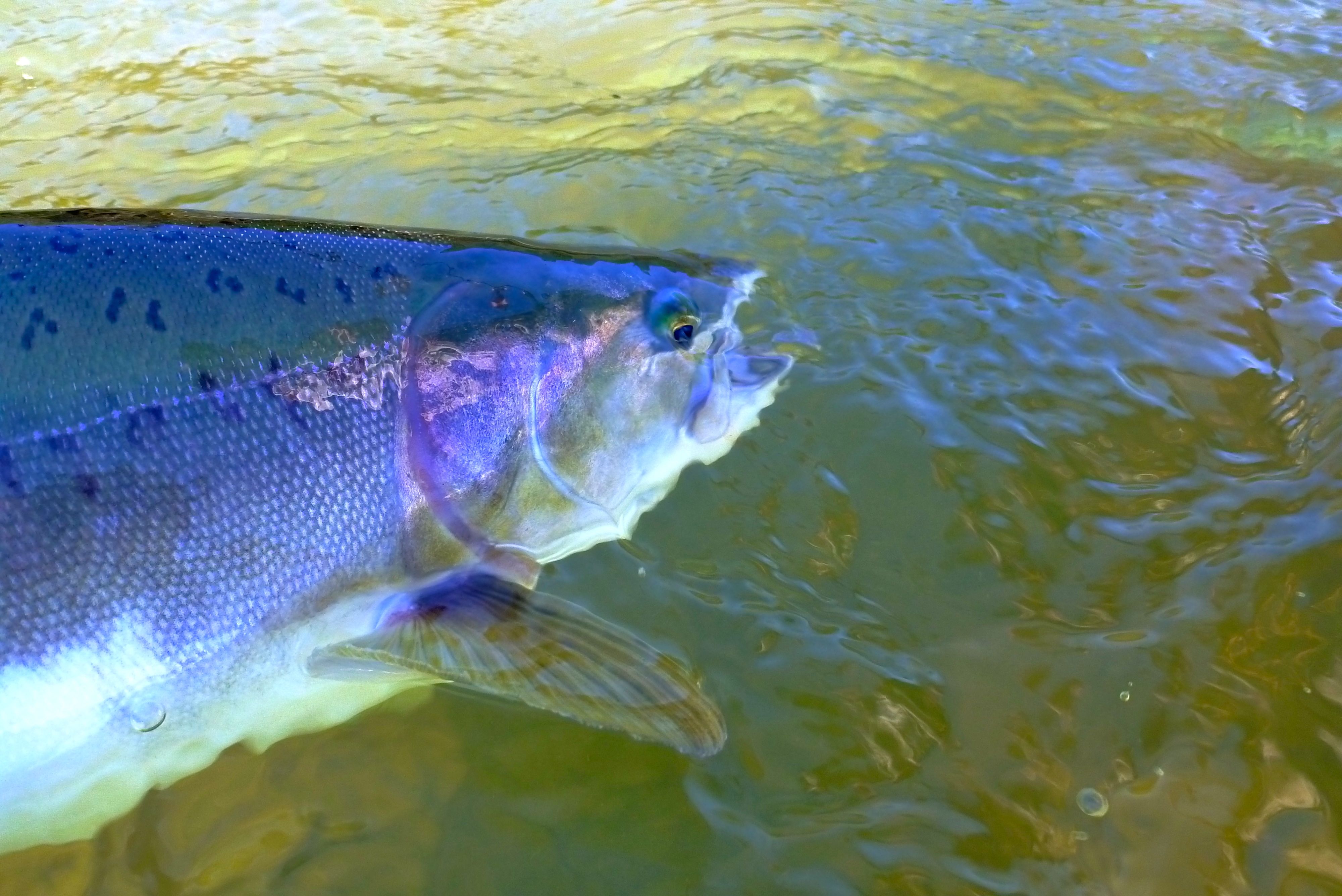 Rivers
There’s still a wide variety of moving water options worth fishing, despite the Skagit, Sauk and Stillaguamish systems being completely closed to fishing this summer and fall. On the home front, the Nooksack is at a very fishable level, through the water in the North Fork and main stem continues to flow very turbid from glacial melt. Currently, folks are catching pinks throughout the river, though the lack of visibility makes it a slower fishery than elsewhere. Larger presentations like pink Starlight Leeches and Pink Egg Sucking Leeches or Reverse Marabou Speys have been the ticket. The purple Starlight Leech has accounted for a handful of early coho. Pinks will take purple too, being completely unaware of the irrefutable fact that they’re only supposed to eat pink things. South of no man’s land (the no fishing zone between the Skagit and Stilly so abysmally large that it can be seen from outer space), the Skykomish and Snohomish have a mix of pinks and a few coho as well. Here the water is considerably less murky than on our beloved Nooksack, and smaller flies tend to outperform the big ones accordingly. Fish Pink Comets, Pink Finkus, Sparkle Bombs and the Capital Punishment. When pink ain’t working, go chartreuse, white or even purple. If the fish are present, and they are, you’ll frequently see them rolling. If you’re not catching, change flies certainly but also consider changing your position in the run if you have that luxury. Fish may move hurriedly through a small section of river and slow down for a moment or two to reflect on life and their surroundings in other spots. You want them in the reflective mood and not the “Oh #@%! I’m totally late for work!” variety. They just bite better under those circumstances. The South Fork Nooksack opens October 1st for coho and traditionally sees a good number of fish returning to the hatchery below Skookum Creek. Your more subtle patterns like Rolled Muddlers, Cali Neils and Coho Buggers are the bread and butter flies of this clear water fishery, much like on the lower Fraser tributaries we’ll be fishing for coho in BC next month. Start tying or start buying. Fortunately, coho numbers overall look a little more promising beyond the Skagit and Stilly returns. A few odd Atlantic Salmon are showing up in our rivers though we are not hearing many consistent catching reports. Our guess is that whatever you happen to be fishing for other species is as likely to work as anything, so you’ll up your odds tenfold by wearing tweed on your next foray to the river. If salmon aren’t your thing, trout fishing continues in the foothills streams draining the Cascades and the upper Skagit above Ross Lake in BC. Fall on the upper Skagit continues to see a few terrestrials like ants and beetles during the dry days, a smaller green drake (#12’s and even #14’s), some blue winged olive mayflies and the omnipresent midge. You can also mix up your day by swinging meaty streamers like Double Bunnies, Dali Llamas and Egg Sucking Leeches on a sinktip for some of the really large bull trout that make their way upriver this time of year. 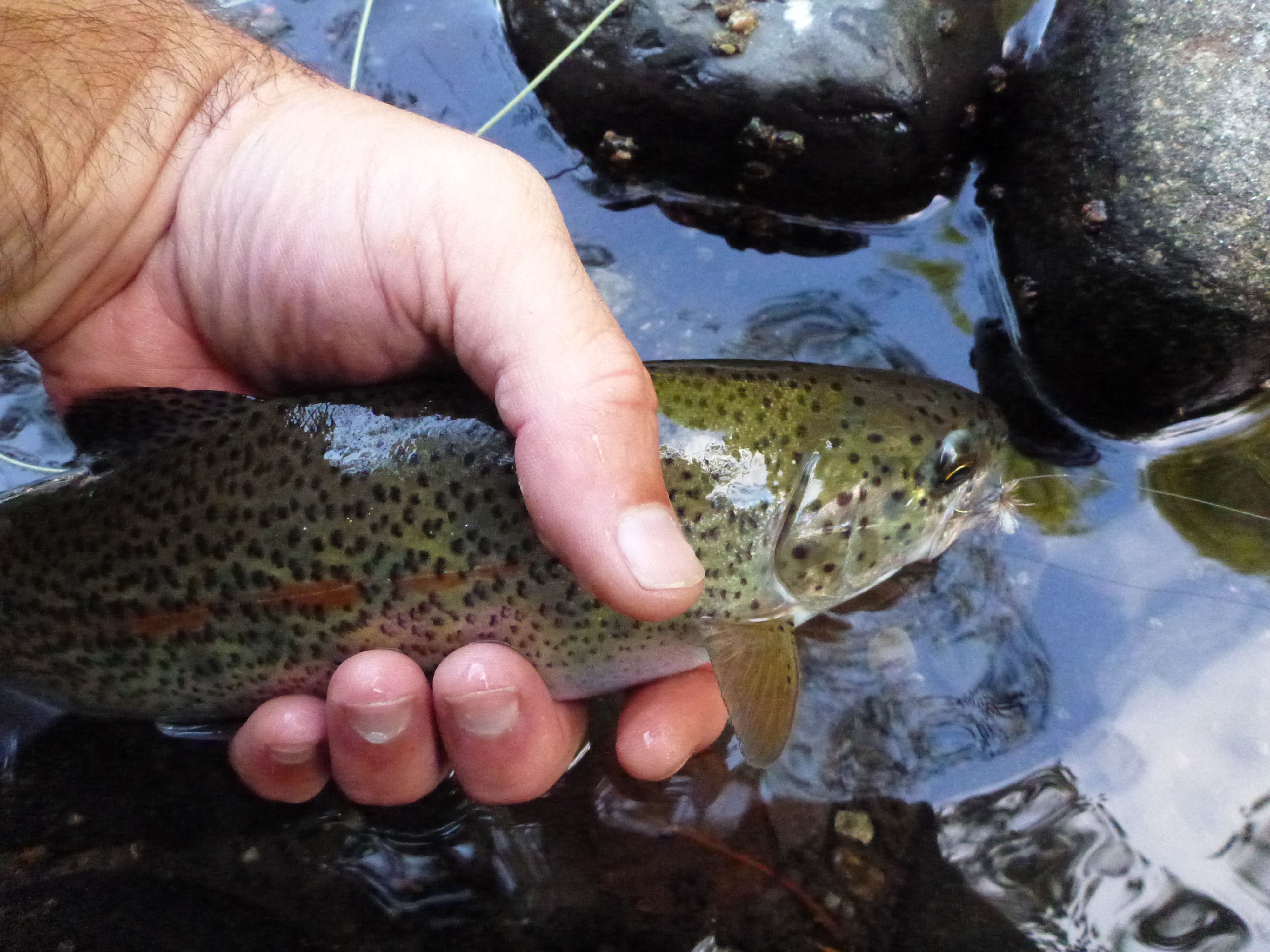 Lakes
After another excessively hot summer, it’s time for lowland lakes to begin cooling down and for the stillwater trout scene to heat up. Cooler water temps will find trout once again comfortable in the shallower margins of the lake as they seek to fatten up before the onslaught of winter and a much slower metabolism. Your typical autumn trout fishery finds staples like leeches, minnow patterns and scuds (if present) become some of the key food sources in the absence of the bigger hatches we’re used to seeing in the springtime. Once the water cools, Pass is a really fun fall fishery as both browns and rainbows really key in on fathead minnows along the lake’s edge. Zonkers, Flash Fry and Squirrel Leeches, Muddlers and Marabou Clousers work well. If you’re planning a trip east or north to fish one of the hundreds if not thousands of quality high desert lakes, many of them will close at the end of October, so time to make it happen. Likewise, the weather can start getting dicey in the alpine country in the next month or two, get that last hike in there before Mother Nature says your window is closed for another year. 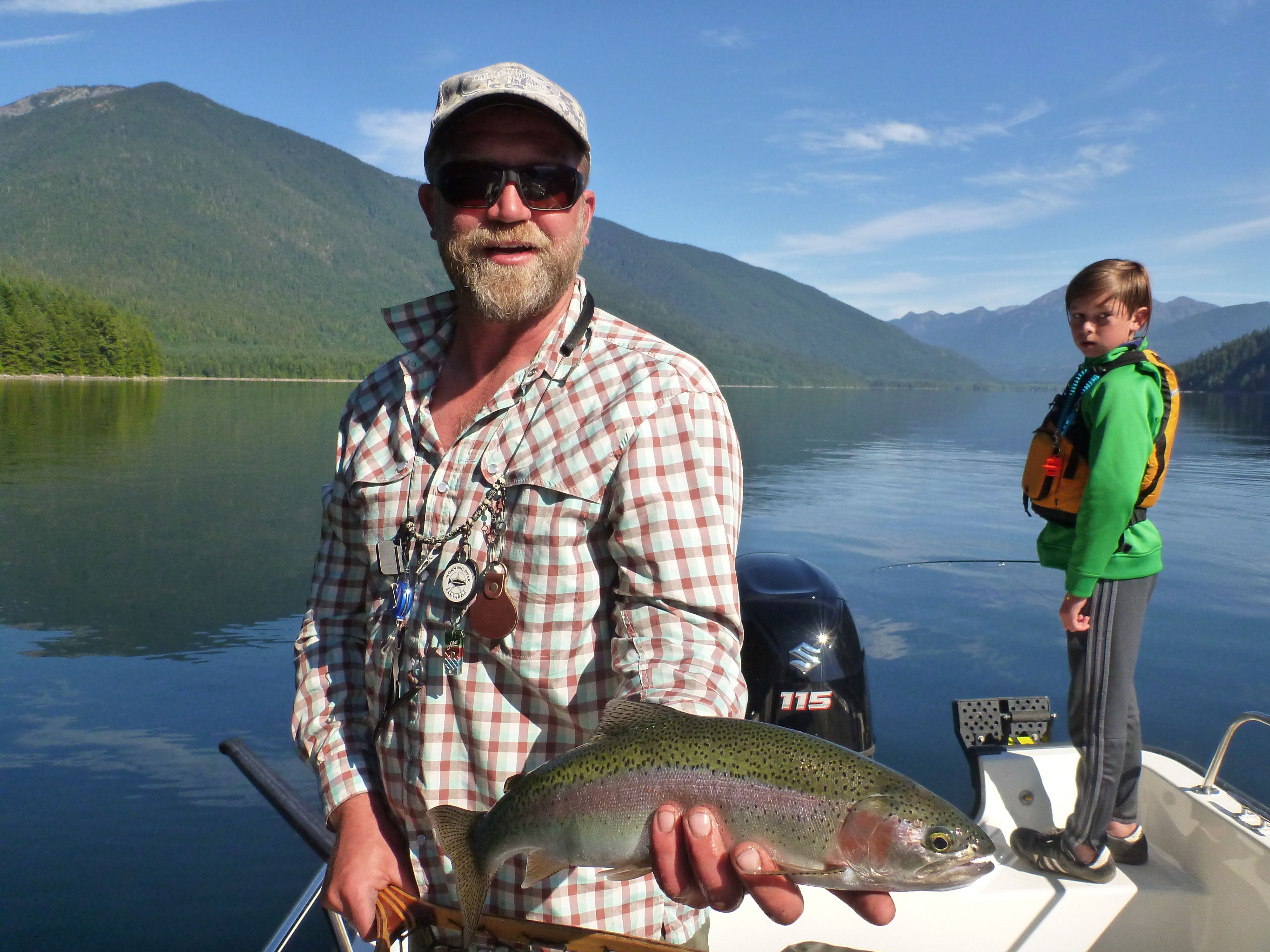 Ross Lake has been fishing decent in the North Cascades, with Marabou Clousers, the Ross Lake Shiner, Olive Zonkers and BH Dude Friendly’s accounting for some fish. September and October can be absolutely amazing up there in terms of both scenery and fishing success. Over the last month, we’ve been finding fish out a little deeper over the edge of the drop offs rather than on them. As things cool, you’ll more likely see large trout cruising tight to the shore, looking for redside shiners to munch. Under these circumstances, setting up a boat drift along the shore and casting and frenetically retrieving an injured shiner pattern can provide lights out fishing on the big lake. While I happened to be on Ross during last month’s solar eclipse and found the bite mysteriously turned on strong as the moon obfuscated the sun, I suggest not waiting until the next such event to experience the thrill of an infamously powerful and thick-shouldered Ross Lake rainbow. 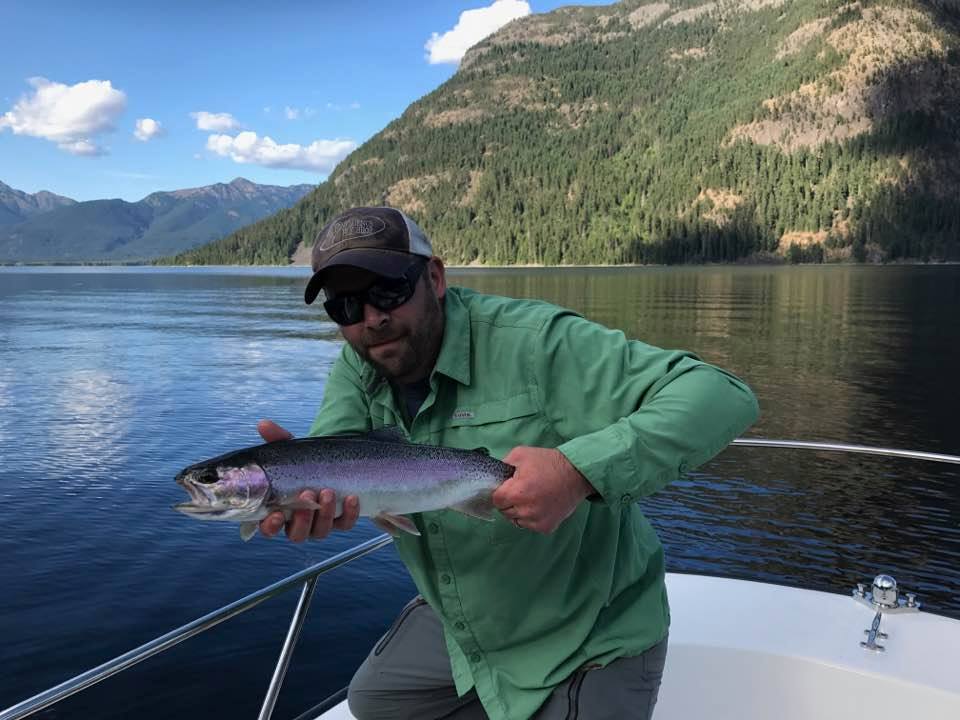 Saltwater
Alas, our favorite late summer beach fishery essentially ended before it started, with the west side Whidbey salmon fishery closing in Marine Area 9 on Labor Day. We ventured down a few times and found lackluster fishing for the spotty pinks moving through and a heard of a few coho caught during the better tide windows toward the end of August. Colin from Flanagan Fly Fishing has reported consistent fishing for both sea run cutthroat and coho in the northern portion of Hood Canal as they both feed aggressively on herring, sand lance and northern anchovy. Fish olive/white Clousers, Marabou Clousers, Imitators, Pin Heads and the Psychedelic Herring if the bigger baitfish are present. Marine Area 7 in the Bellingham Bay fishery is open for coho through the end of the September. Also still present in fishable numbers are a bunch jail-broke pen-raised Atlantic Salmon swimming aimlessly around the North Sound and likely wondering why the jolly chap in flame orange Grundens isn’t feeding them anymore. We had the good fortune to tempt some Atlantics immediately following the pen breach (ie. Complete and total implosion) near Cypress Island. They can and do bite flies. Green/white, pink/white and green/pink Craft Fur Clousers with stinger hooks worked just like they do for coho. Despite their hopelessly indolent upbringing, these pen pickles fought insanely well. Inarguably best to rid the Sound of them completely, but given our lack of North Sound saltwater salmon opportunities for two years running, this was one of the better saltwater thrills I’ve had in a while. 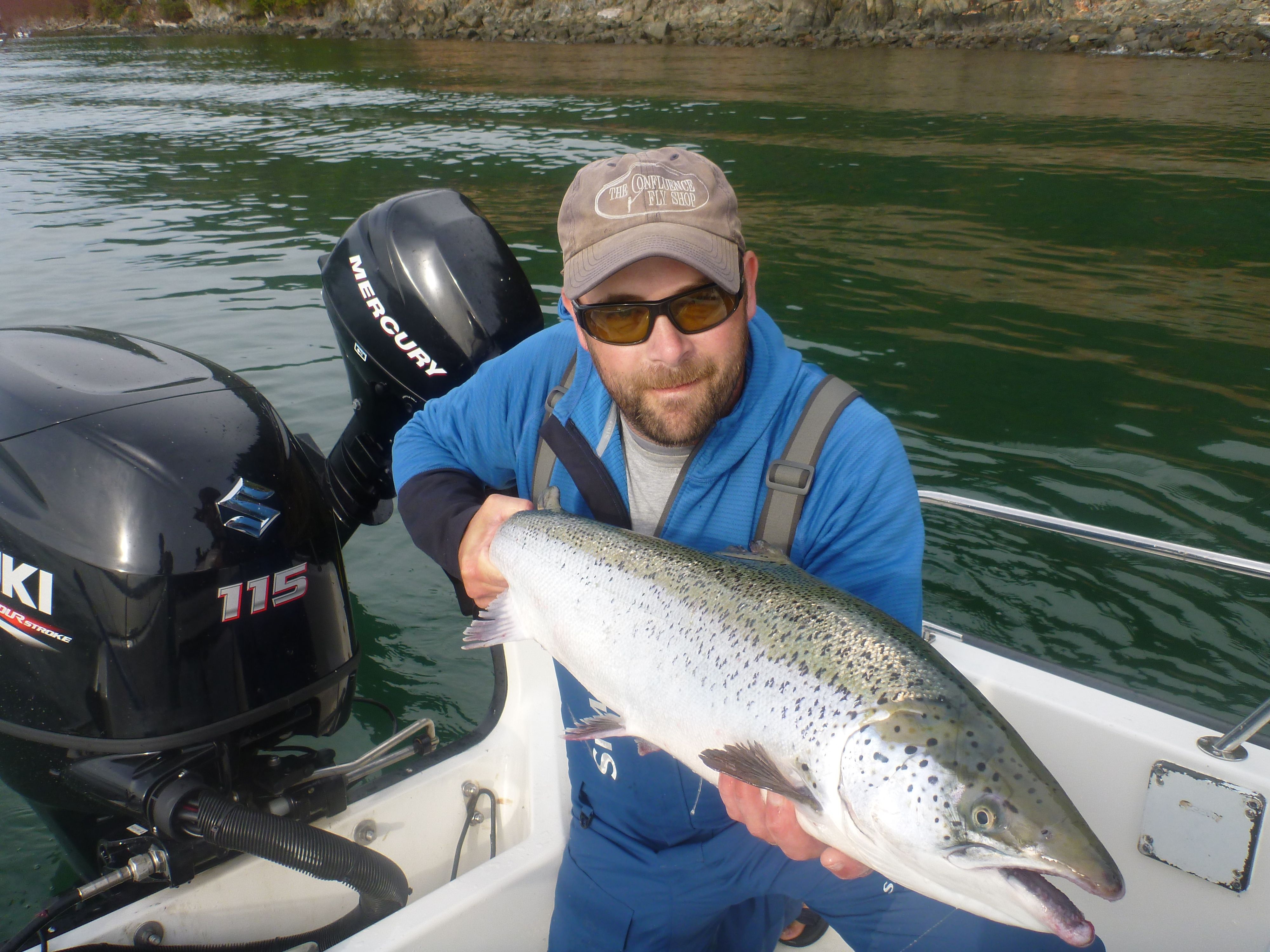