I honestly began to feel like our sunny summer streak would never end, as rivers shrunk and continued to shrink into shriveled boney versions of themselves. Then the skies blew wide open, deluging us with that familiar drip that makes the Northwest what it is. By late August, some of our fisheries were beginning to feel a bit stale, so a little moisture and bump in river flows is just what the doctor ordered. Salmon are moving, sea run cutthroat are trickling into lower rivers and the bull trout are staging in upriver pools beyond where most of us want to go.

Things are happening for sure. Football season is officially underway as well, though if you’re a Seahawks fan, you’re probably better off fishing the fall away this year. OK, maybe you can record the game. We say it every year, but September and October are the months we wait for all season. Lakes, rivers and salt all come into their own and the fishing is mostly what we’d like it to be. Not that we ever stop fishing, but the promise of solid opportunity, reasonable weather, pretty foliage and more than a few fish to be caught make these short few months the ones we’d just as soon clone and spread out over the remainder of the year. They go all too quickly. So in addition to pumpkins, turkeys and anything else you may wish to carve out in the near future, be sure to carve out some time to fish soon and enjoy some of the best the year will have to offer. If you’re in the market for a new rod to enjoy this fall, be sure to check out our big selection of sale rods on last year’s models below. 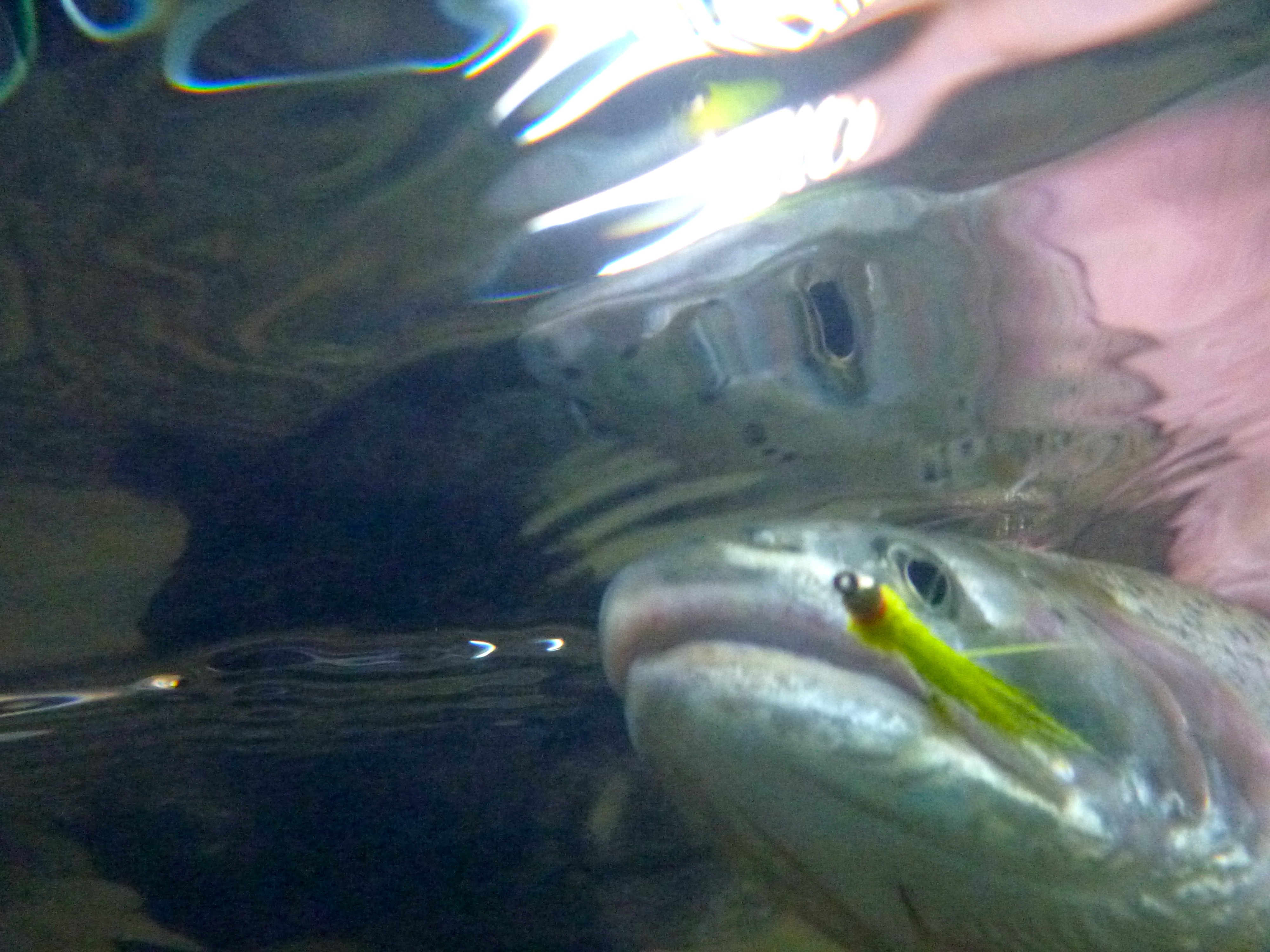 Rivers
Salmon, cutthroat, char? Tough choices all around but you’re bound to have a good time no matter what you choose. We are getting decent coho reports from the lower Nooksack and Skagit with fresh fish moving in daily. The Nooksack is a little dirty from all the recent rain but should begin clearing as the weather system passes. The Skagit has faired much better in the way of fishable conditions. Both systems hold up well as the nights cool and things start freezing up in the high country. This rain will certainly help move more salmon into the rivers to do their thing. 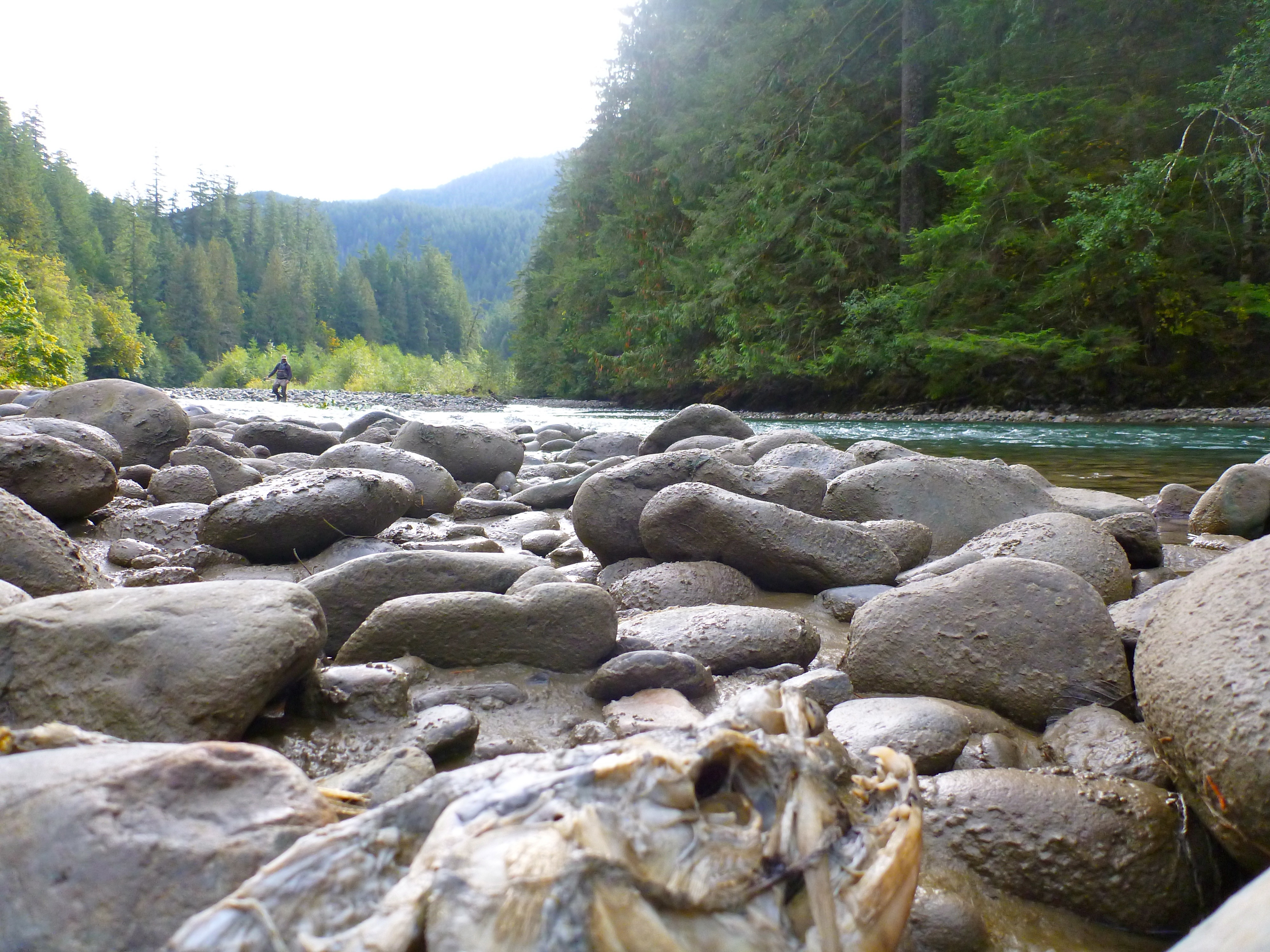 Under lower visibility conditions, your better coho producers will be bolder and flashier. Any of the Conehead Alaskabou series from Showgirl, Pixies Revenge and Manhattan work well, as do Starlight Leeches and Hareball Leeches. As the water drops and clears again, smaller, more subdued patterns like Rolled Muddlers in pink, blue or chartreuse along with small Lead Eye Flash Flies, Coho Killers and green Woolly Buggers start picking up fish. The added bonus of these smaller offerings is that they’ll regularly pick up sea run cutthroat when the coho aren’t around. Herein lies the challenge. Your average cutthroat is entirely landable on your 7 or 8 weight salmon rod, while the bonus coho hooked while fishing cutts on a 4 or 5 weight is an entirely different beast. These are first world problems to say the least.

Cutthroat fishing has been decent on the lower Stilly and Skagit with some nice fish out there in the 16″ plus range. You’ll encounter lots of 10-14″ fish before you tangle with some of the real bruisers but they’re out there waiting to be found. For both salmon and cutts, seek out slower runs and off channel sloughs connected to the main flow. Add a little depth and some woody structure and you’ve found a potential fish haven. A boat certainly helps in terms of covering water, but if you spend a little time and do some homework on Google Earth, you’ll find some epic walk in water to fish from shore. The SF Nooksack opens October 1st for coho and usually has plenty of salmon staging in the stump-strewn pools for the opener. 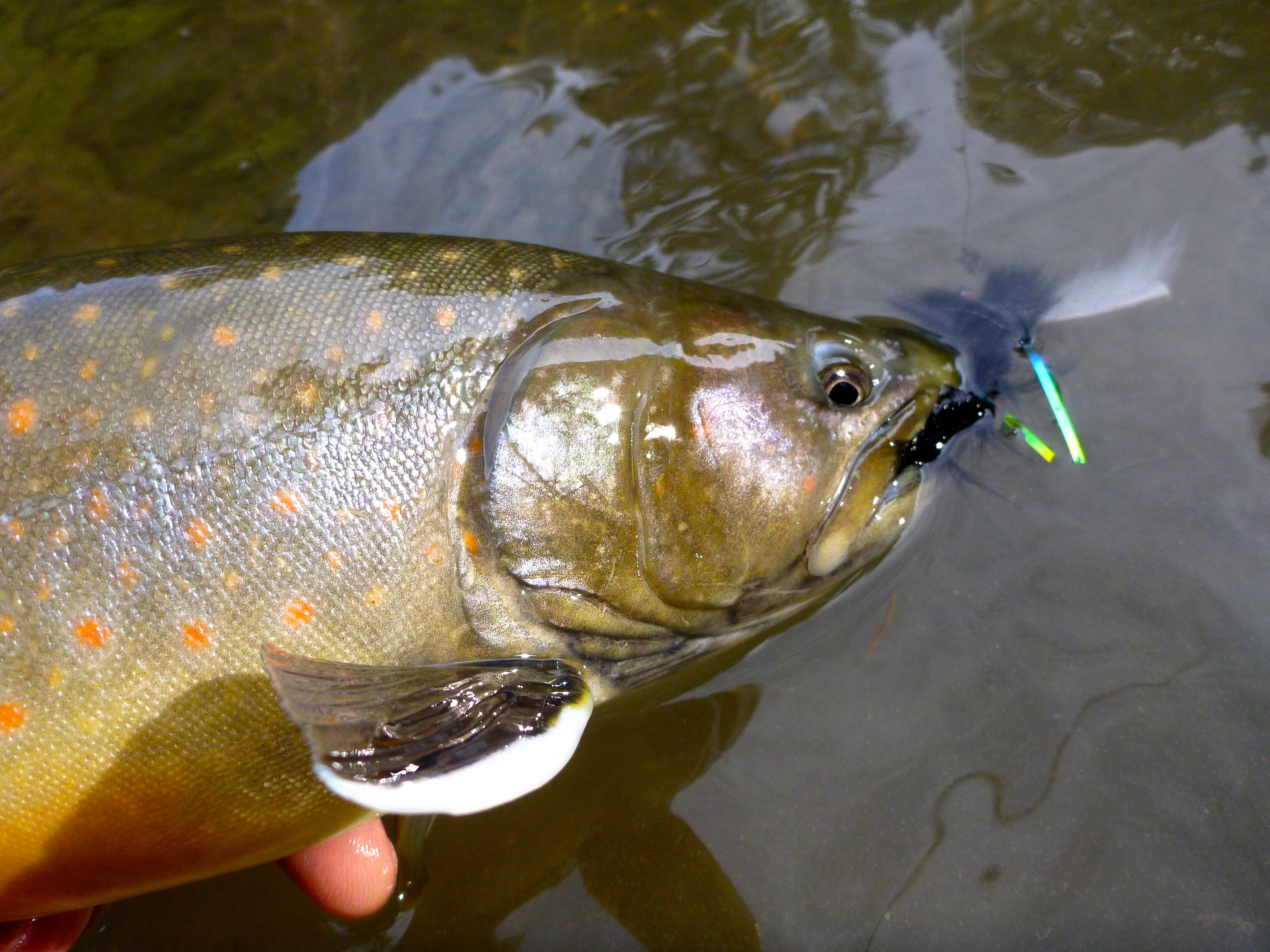 Further upriver, we have bull trout working their way through the system to spawn later in the fall. While you’ll catch bulls on a variety of flies while targeting other species, we favor large streamers for searching out migrating bulls on the Skagit and Sauk. Dali Llamas, Yo Mama’s Llama, black/white Sculpzillas, Zonkers, Articulated Marabou Leeches and big Egg Sucking Leeches are hard to beat. These are an amazing fish on a 5 or 6 weight single hand rod coupled with an OPST Commando Head and sink tip or one of the newer trout speys we carry at the shop.

While fall is also a fantastic time to explore the upper Skagit above Ross Lake for bulls and rainbows, the road into Hozomeen remains closed out of Hope, BC due to several fires burning in the National Park. Boating in from the south end of Ross Lake remains your only access until the road reopens. Check the NCNP website for updates on this road closure. Your high mountain trout streams typically continue to fish through the end of October and the general stream trout season provided things stay in shape and it doesn’t get too cold. Be sure to have a few large orange Stimulators in the box to imitate the October Caddis we’ll have fluttering about around our moving water. 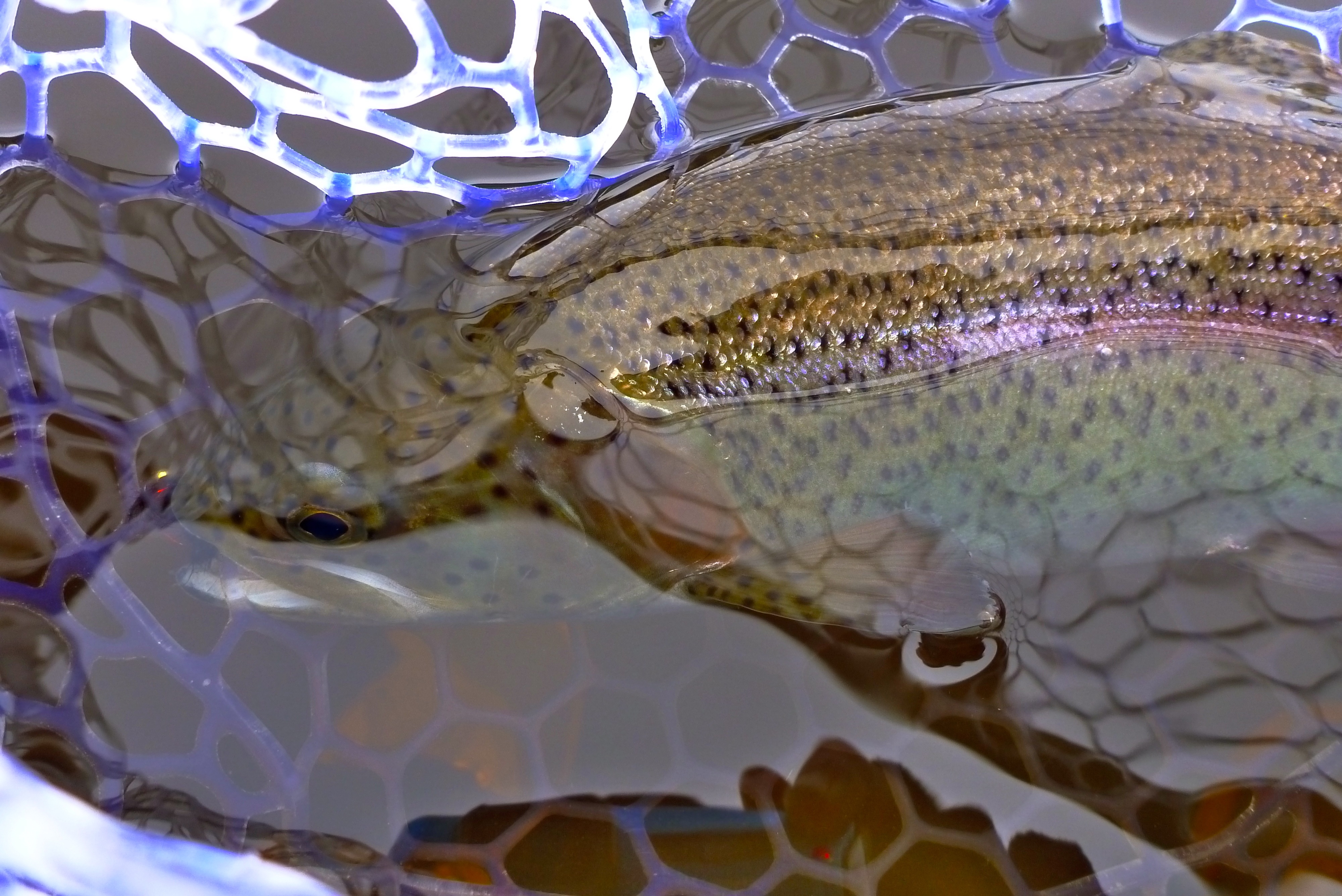 Lakes
With the weather cooling, fall is a fine time to get back on your favorite lakes in search of hungry trout wolfing down a few extra calories before the cold really sets in. Squalicum picks up again this time of year after a long hot and dry summer, as will Pass Lake. Put and take lakes like Silver, Cain and Padden can be worth a look too. Fewer fish remain than after the spring opener, but they are generally lightly pressured this time of year and fishing can really turn on again.

Fall staple patterns include Beadhead Simi Seal Leeches, Stillwater Buggers, Hale Bopps and minnow imitations like Micro Zonkers, Clousers and Rolled Muddlers. Pass is one of our favorite fall lakes as you’ll often find big trout corralling fathead minnows in the shallows and along the edges of the lake. On a discouraging note, yellow perch were recently discovered in Pass and WDFW is working with local fly clubs to gather more information in the impacts this invasive species may have on the fishery. We’ll get updates as data is collected and decisions are made about how to manage this fishery. It’s a shame after having a really good spring fishery with a large average sized rainbow and really healthy, vigorous fish available to catch and release close to home.

Ross Lake is another outstanding fall fishery. Big wild rainbows often move in out of their summering depths and cruise the shallows in search of redside shiners. This time of year you can really work the near shore drop offs and flats with a streamer tip or full sink, at times even sight cast to fish. As mentioned above, access through the north end via Hope, BC is currently restricted due to fire activity, but it’s still possible to get in via the US at Ross Dam with a canoe or kayak or better yet, rent a boat with an outboard from the Ross Lake Resort and have your run of the lake. 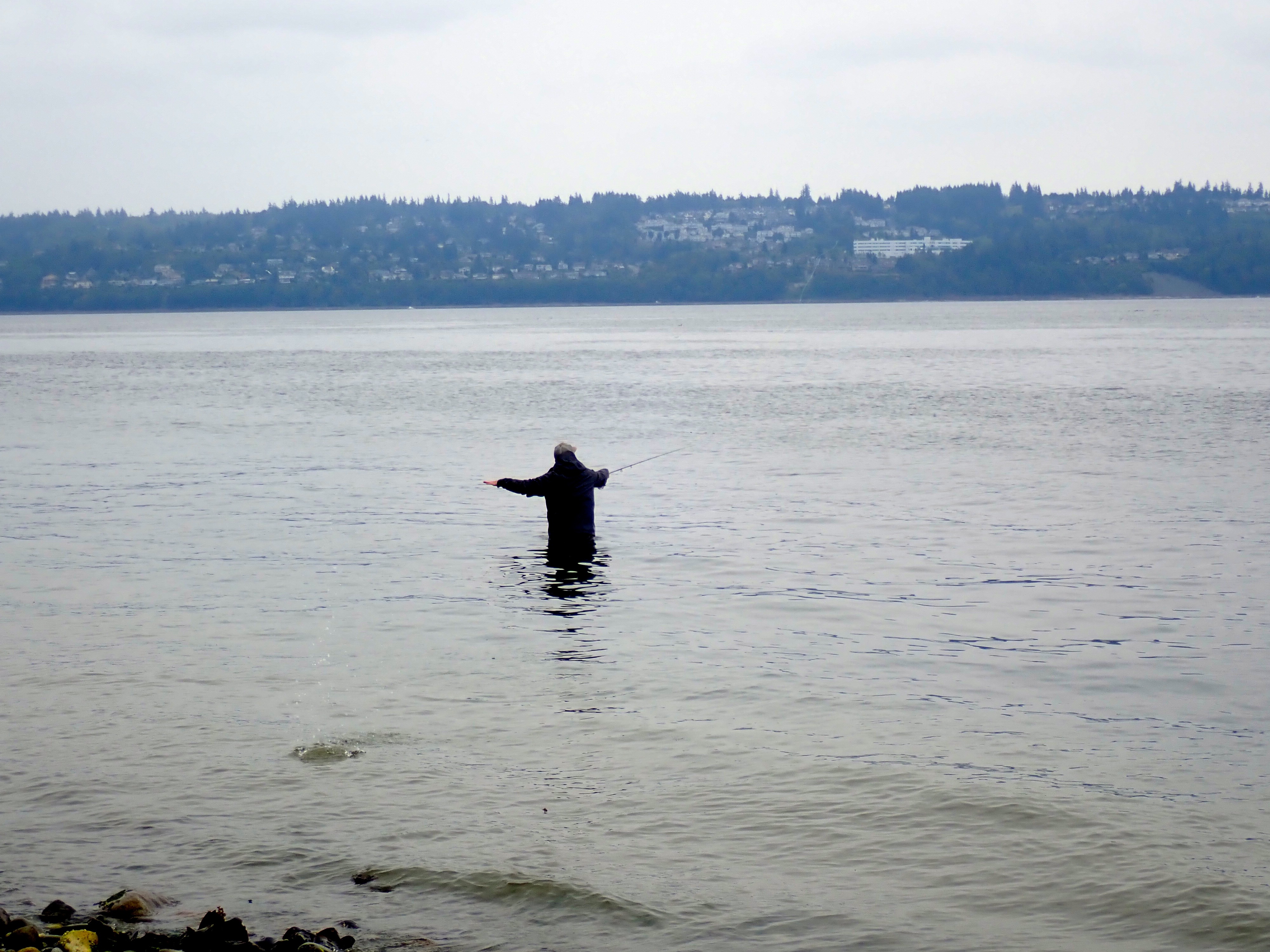 Salt
We are finally seeing decent numbers of ocean coho filtering into the North Sound from the Strait of Juan de Fuca. Fishing for resident coho has been semi consistent around the southern portion of Whidbey Island and with bigger migratory fish moving in, fish are being caught daily all along the west side of Whidbey. A 6-8 weight rod, stripping basket, handful of big chartreuse/white, pink/white clousers, Psychedelic Herring, Shock and Awes and a steely resolve will put you on fish if you keep at it. If you’re looking for an awesome new beach line, we love Rio’s Coastal Quickshooter and have been using them for a while now and continue to be impressed. Fish can show up at any point along the beach but the outgoing tide has been more productive, especially with some of these larger tidal exchanges. Most of the North Sound will close to saltwater coho at the end of September this year so get at it before the month is over. Also, please take note that wild coho must be release in Area 9 this year. It’s a good idea to ascertain as to whether or not your hooked fish is missing an adipose fin before dragging it several yards up onto the sandy beach. While this is a perfectly suited landing technique for a hatchery fish destined for the BBQ, wild fish must be kept in the water and released quickly. Cutts are still hanging out off the North Sound beaches as well and have been showing up here and there on the bigger herring and sand lance imitations working for coho. Focus on areas near the Skagit and Stilly mouths for more consistent cutthroat as they move toward the rivers where they’ll spend a good portion of fall and winter. 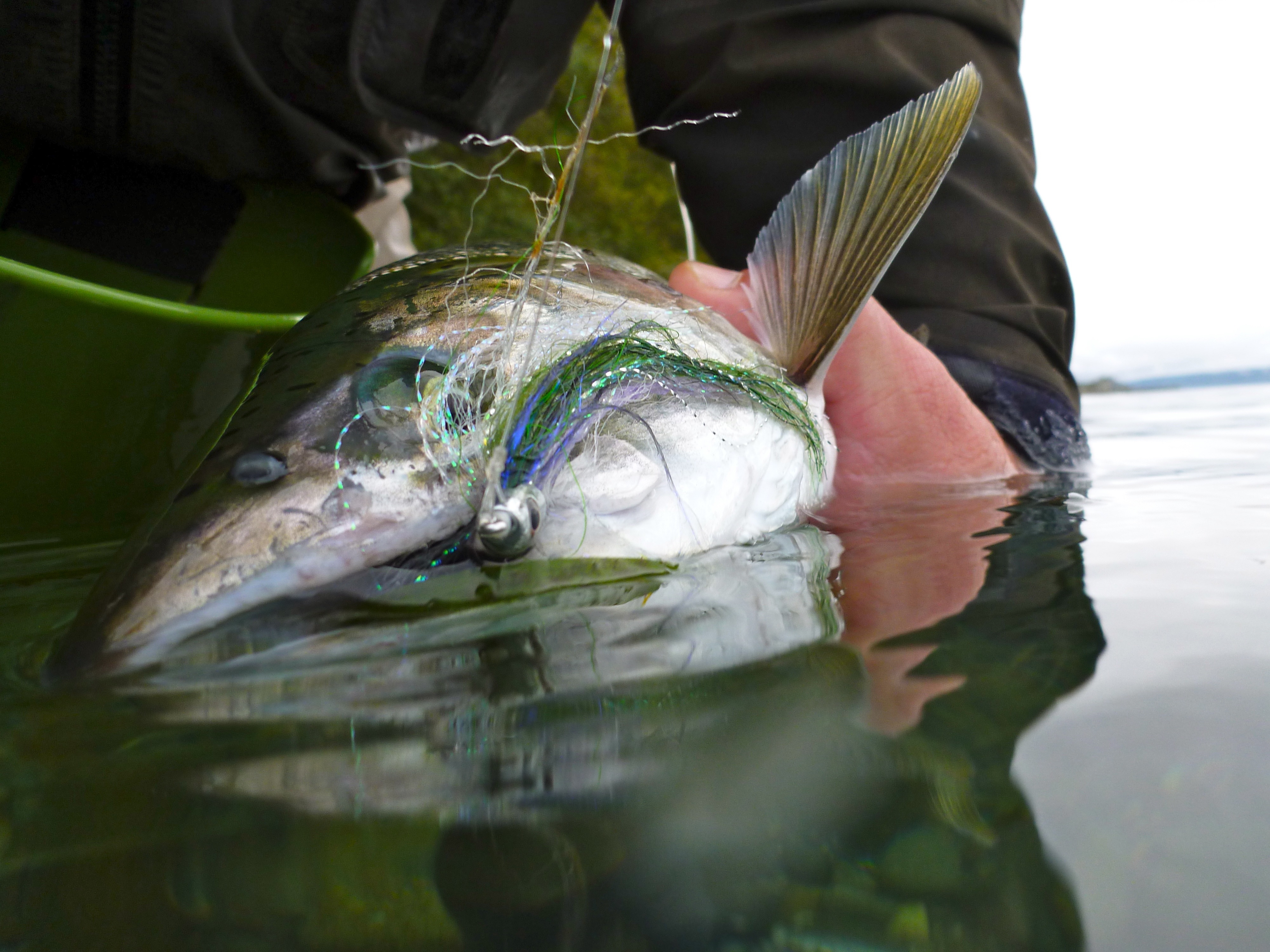