We’re about a week away from the official start of fall, though it feels like the season has crept in prematurely with some drizzle and gray. It’s a welcome change after a sweltering summer and we’re entering what many express to be their favorite time of the year to fish. It is most certainly mine. Salmon on beaches, salmon in the rivers, bull trout, sea run cutthroat, reawakening rainbows in the cooling lakes, one last shot at the high country or a weekend on the Methow? Take your pick and enjoy. If you’re blessed with the gift of time you ought to be all in right about now. If you’ve got work to do, deciding how and where to spend your precious fishing hours can be challenging with so many options. Fortunately, there is no wrong answer and it’s all pretty good out there right now.

The pink salmon season has been robust so far and the Skagit is absolutely corked with humpies from the mouth to Marblemount and beyond. After a few successful salmon outings, I found myself searching the upper watershed for trout and char and perhaps some respite from the swarms of humpies and people packed lower river bars. As high upriver as I went, there was no escaping the writhing masses of salmon, darting up the riffles, spawning in the shallows and more or less owning the river. It was tough going finding bull trout as the sheer numbers of pinks seemed to displace everything else. Seeing a northwest river brimming with sea run fish on the other hand is still a welcome sight in the wake of so many disappointing returns. 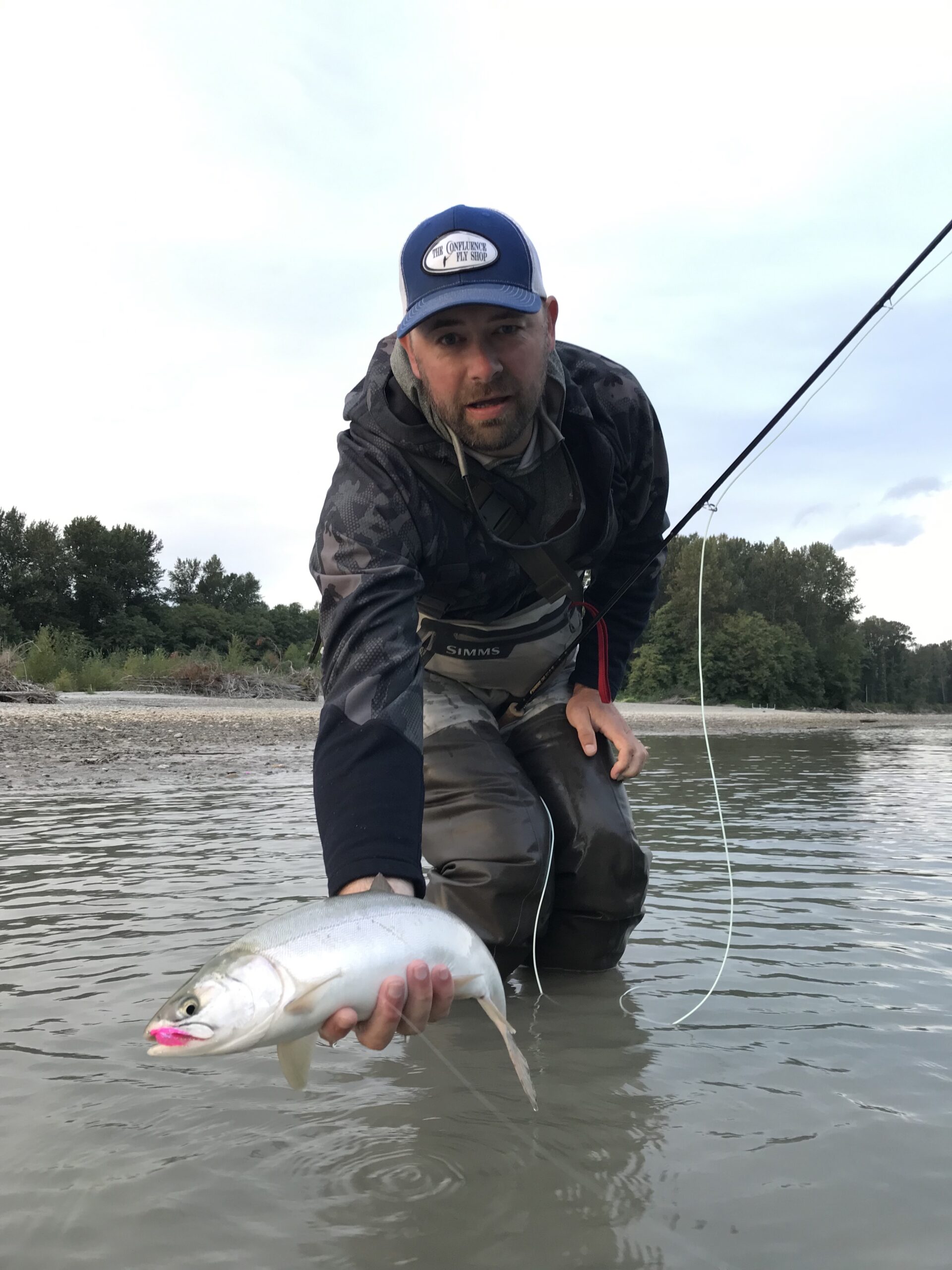 If you’re a steelheader, this is the fall to find something else to do. Steelhead returns from the Columbia to the Skeena system are abysmal and they could definitely use a break from angling pressure. Check your regulations and emergency closures if you’ve already got a trip planned, some summer/fall steelhead fisheries throughout the west are closed or closing early due to poor returns. 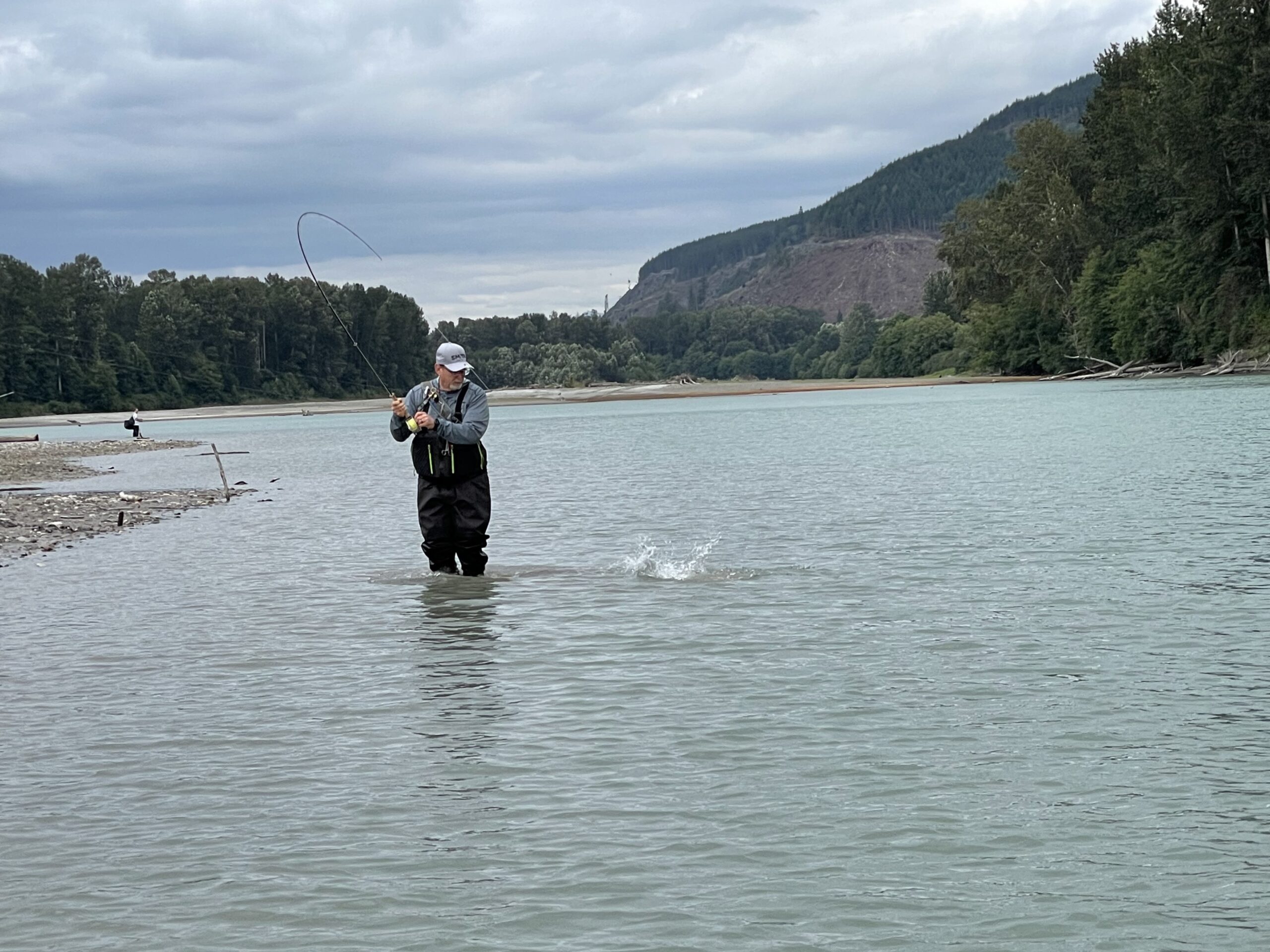 The shop continues to experience steady traffic and we’re always excited to see you. We’re back to requiring masks again per state mandate and thank you for your continued diligence in wearing them. Product availability is improving some, though requires really being on the stick to keep well-stocked. If there’s a product you’re after, it never hurts to call ahead and make sure we’ve got it. We generally have a solid inventory in the shop these days and are bursting at the seams with waders and boots as well. In the event we need to order something for you, most of our vendors allow us to check real time inventory and stuff arrives pretty quickly at the shop when it’s in stock.

In the meantime, enjoy this lovely season on the water, catch a few fish and don’t forget to start packing that rain jacket that’s been collecting dust for the last four months… 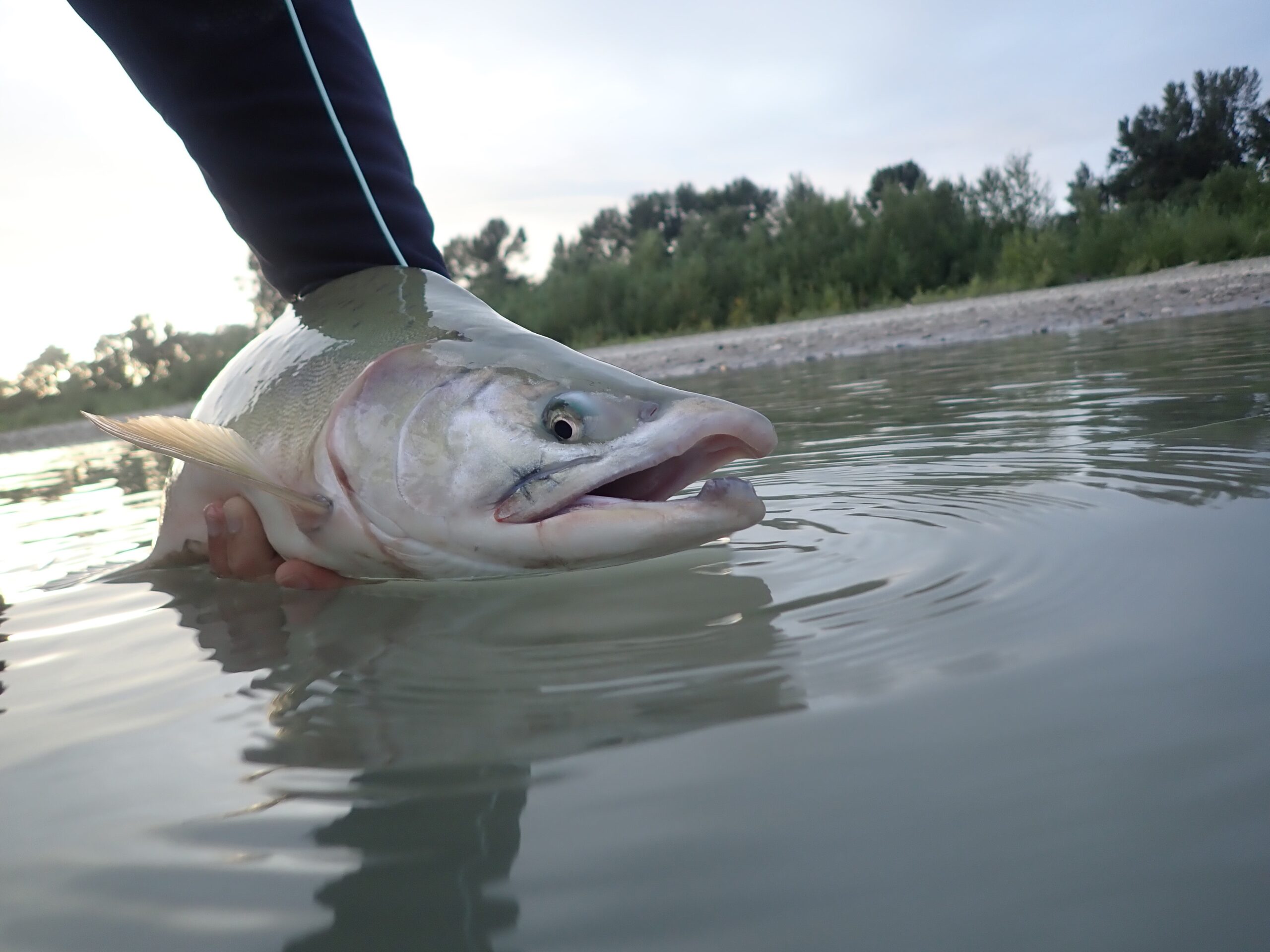 Rivers
While visibility has remained a challenge lately in both the Nooksack and lower Skagit, they’ve been 50 shades of pink for the last several weeks. It’s been said that fishing and catching are two different things and that is certainly true, but when good river conditions and the robust numbers of salmon collide, fishing days have leaned heavy on the catching side. There are pinks from top to bottom in the Skagit. It’s open from the mouth the bridge at Marblemount for salmon through October 15th. If you’re looking for bright fish, focus on the lower river. The water will usually be clear above the Sauk but the fish will have a bit more color. When the fish are tightly packed in a run, be sure to fish the edges or light enough that your fly remains above them to avoid snagging. When they’re on, they’ll chase it!

Fly selection for pinks is fairly straightforward. They like pink stuff. Slightly bigger flies when the water is off color and small sparse ones in the clear water. Imagine how simple life would be if you only had one outfit to choose from in your closet every morning. It’s always a good idea though to have a few other options in your box for those exceptional times. We’ve had days when chartreuse, white or even black seemed to out fish the usual assortment of pink tidbits. Fish a 6 to 8 weight rod and be careful with it. We see more rods break from horsing in pinks than any other fish. When the stars align you will usually catch lots of them in a day. Remember to release extra line when you grab the leader to unhook the fish and take the bend out of the rod. Brandon and I will gladly offer a tutorial on technique if you ask.

In addition to pinks, we’re seeing some coho start to show as well in both the Nooksack and Skagit. The SF Nooksack along with the section from behind the MBHS bus barn to the confluence on the mainstem both open October 1st. The rest of the mainstem Nooksack is open now, as is the Skagit up to Marblemount. As always, keep your regs handy or download the Fish Washington app and check for emergency rule changes. 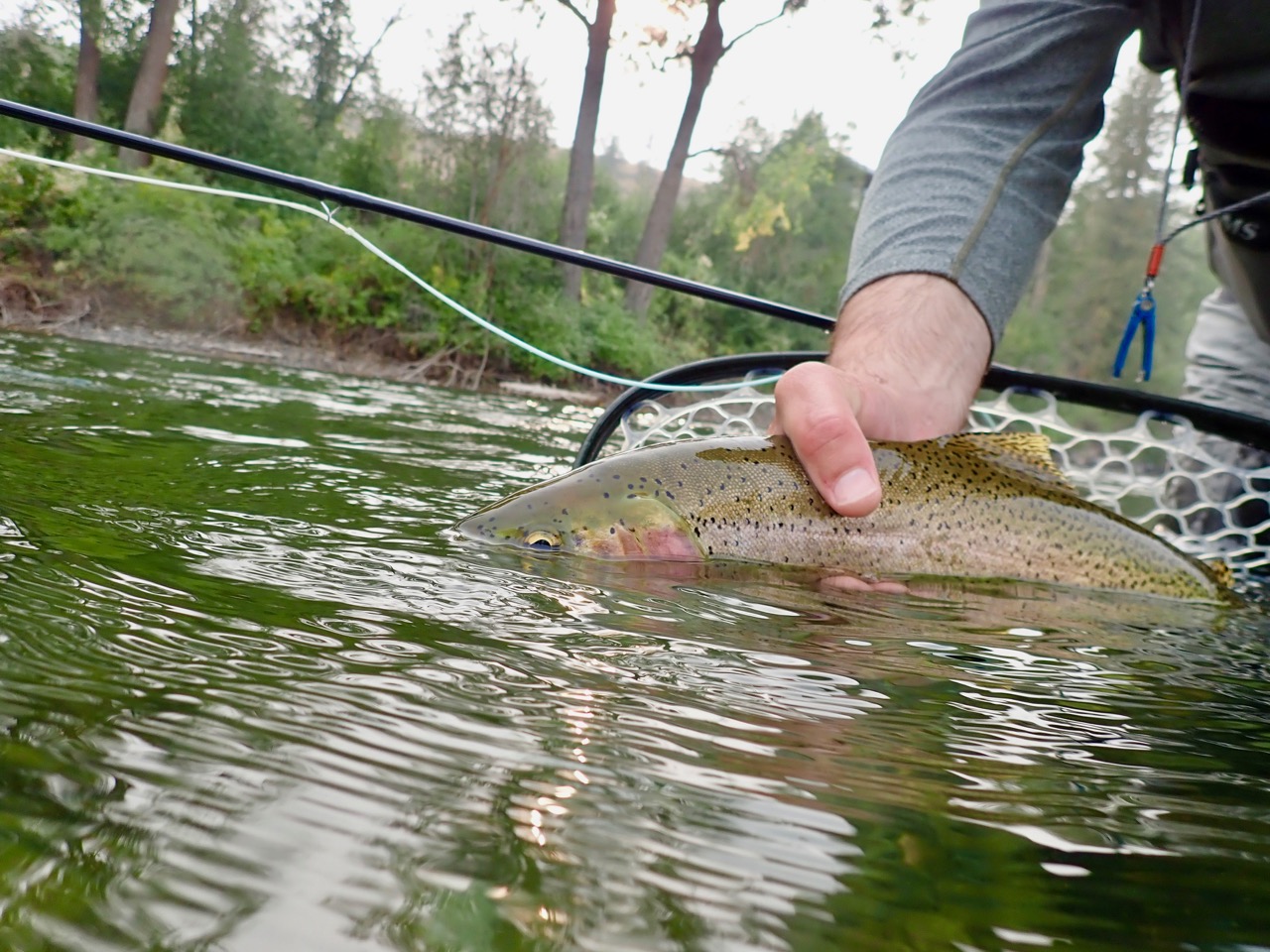 If salmon aren’t your jam, sea run cutthroat are heading up our local rivers and the NF Stilly opens back up on September 15th. Finding cutthroat in a busy salmon year can pose some challenges as they tend to get pushed out of their preferred holding water by the salmon. I tend to start by looking for them in areas where there are fewer salmon but still ample depth and some structure. Finding cutthroat should get easier as the pinks thin out into October. Spiders and Rolled Muddlers are our preferred flies, and you can do exceptionally well with a good old black Woolly Bugger much of the time too.

The Methow is open in sections through the end of the month and the year-round fishery on the Yakima is another worthy destination in the fall too. For either river you’ll want plenty of October Caddis patterns mixed with some blue wing olives, streamers and an assortment of nymphs. Crane flies are also common in the fall, so both adults and MOP flies to imitate the larvae are worthwhile additions to your box. Small streams remain open through October 31st, so there’s still plenty of time to explore the mountain creeks this season too. Keep an eye out for chantarelle mushrooms while you’re up there too. The recent precipitation should have them popping. 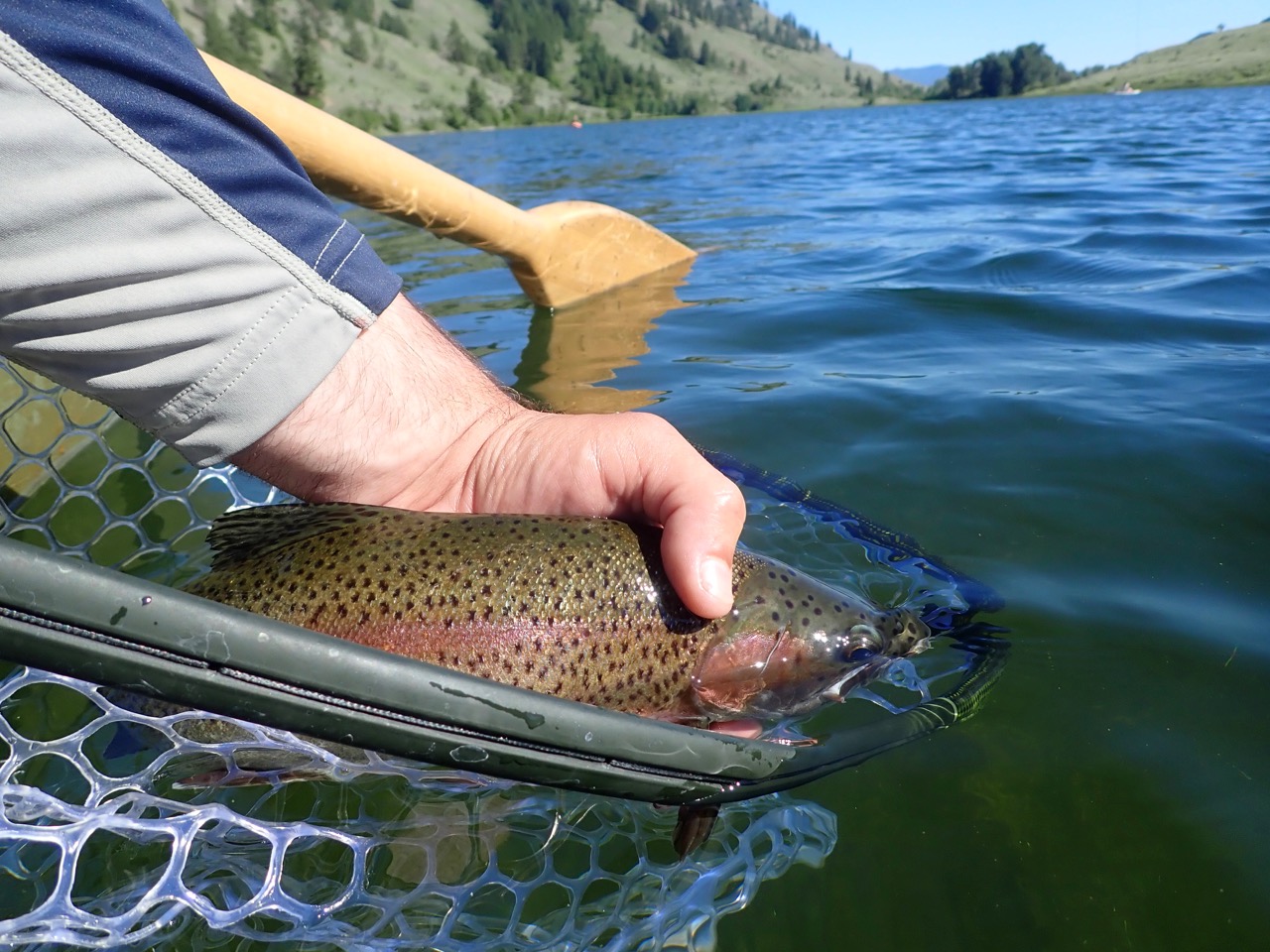 Lakes
Things are finally cooling off after a long hot summer and trout in our lakes will become more active in the colder water. Leeches and minnows are good fall staples for most lakes, along with scuds where present, smaller chironomids and midge emergers. As far as we know, Pass Lake is still closed to recreational activity due to toxic blue green algae and the color still looks downright nuclear lately when we drive by to fish the Whidbey beaches. The algae usual starts to die off with consistent cooler temperatures so we’ll keep an eye on that one. Fishing the shallows with minnow patterns throughout the fall is one of our favorite pastimes. Now’s a good time to plan those last few alpine lake trips as well before it starts snowing in the high country. 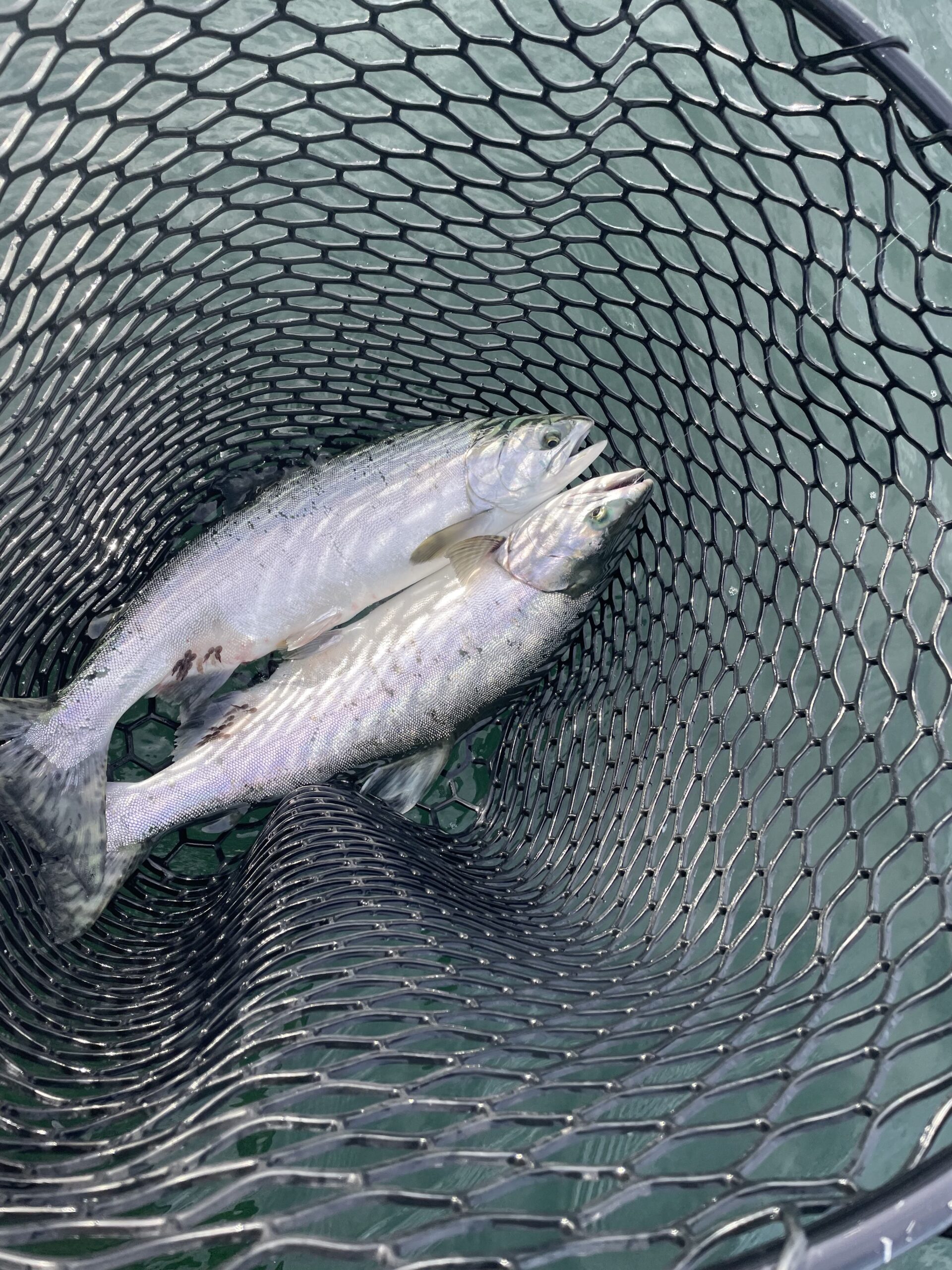 Beaches
We still have schools of pinks migrating along the beaches, though their numbers in the salt will be winding down from here on out. We’ve also been getting more coho along the west side of Whidbey, which remains open through the end of the month. Pink Clousers do the job for humpies, while chartreuse. or chartreuse/pink Clousers in larger sizes work better for the coho, as do big herring patterns. If you’re over in the Hood Canal vicinity, this time of year can be a blast for topwater cutthroat in the salt on termite patterns. 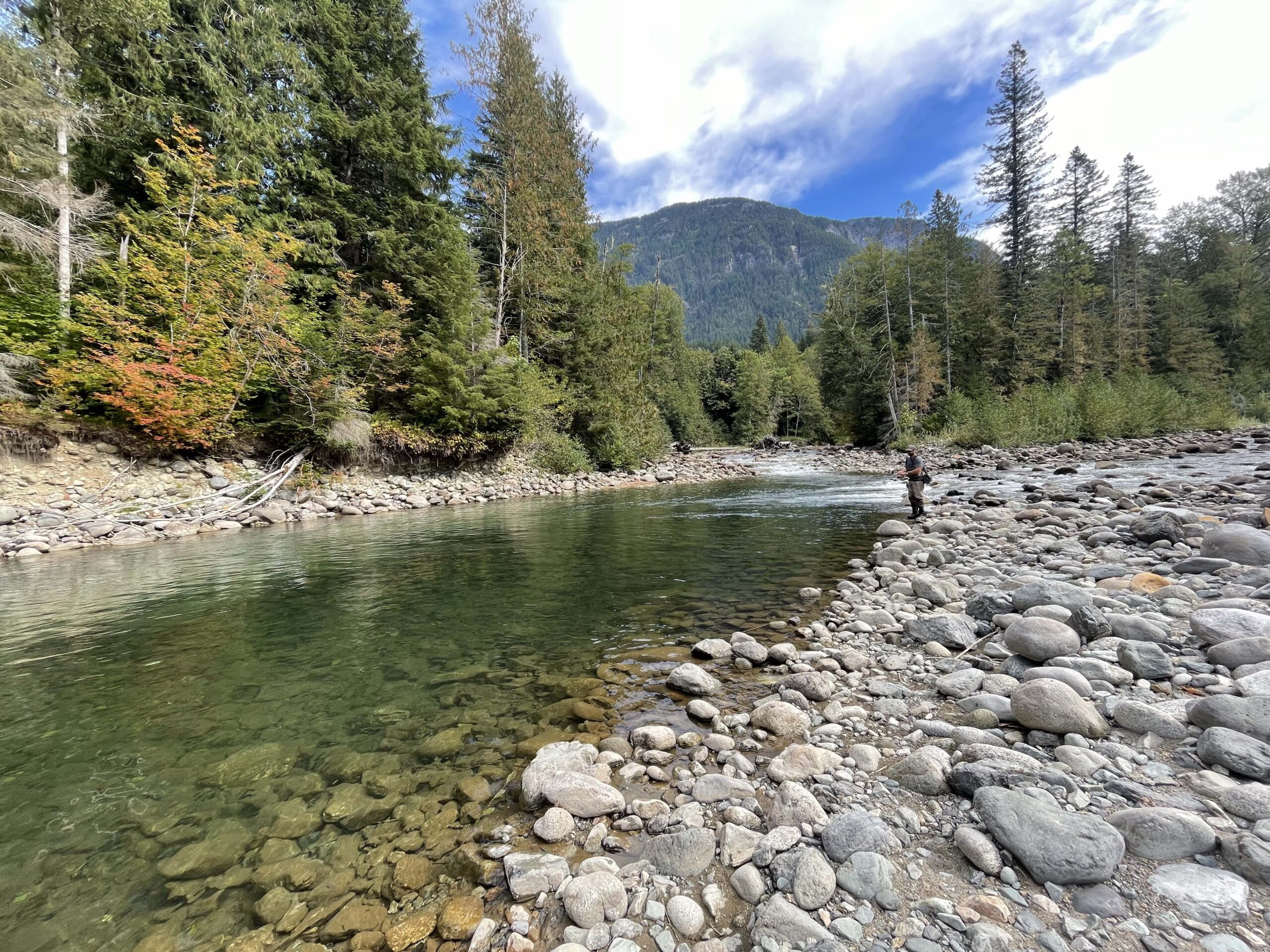