If variety is the spice of life, the past month has been ghost pepper spicy. One day I’m catching largemouth bass in the weeds, then alpine trout, wandering desert flats for carp, prospecting a Puget Sound beach for leaping coho and then off to the eastside again for another sun soaked Methow float. It’s hard to get bored when the scenery is always changing. My only complaint about summer is that some years it feels short lived and when it’s beginning to fade in the rear view mirror you start to think about all the trips you wanted to do that didn’t make the final cut. You just have to appreciate everything you did get to experience and roll the rest on down the road for another time. Now we find ourselves staring down the barrel of fall, which can be arguably even shorter than summer but a very fine season in its own right. To me, fall means salmon, soup and Seahawks. The first two I will undoubtedly enjoy as I do every year. The jury is still out on the third. 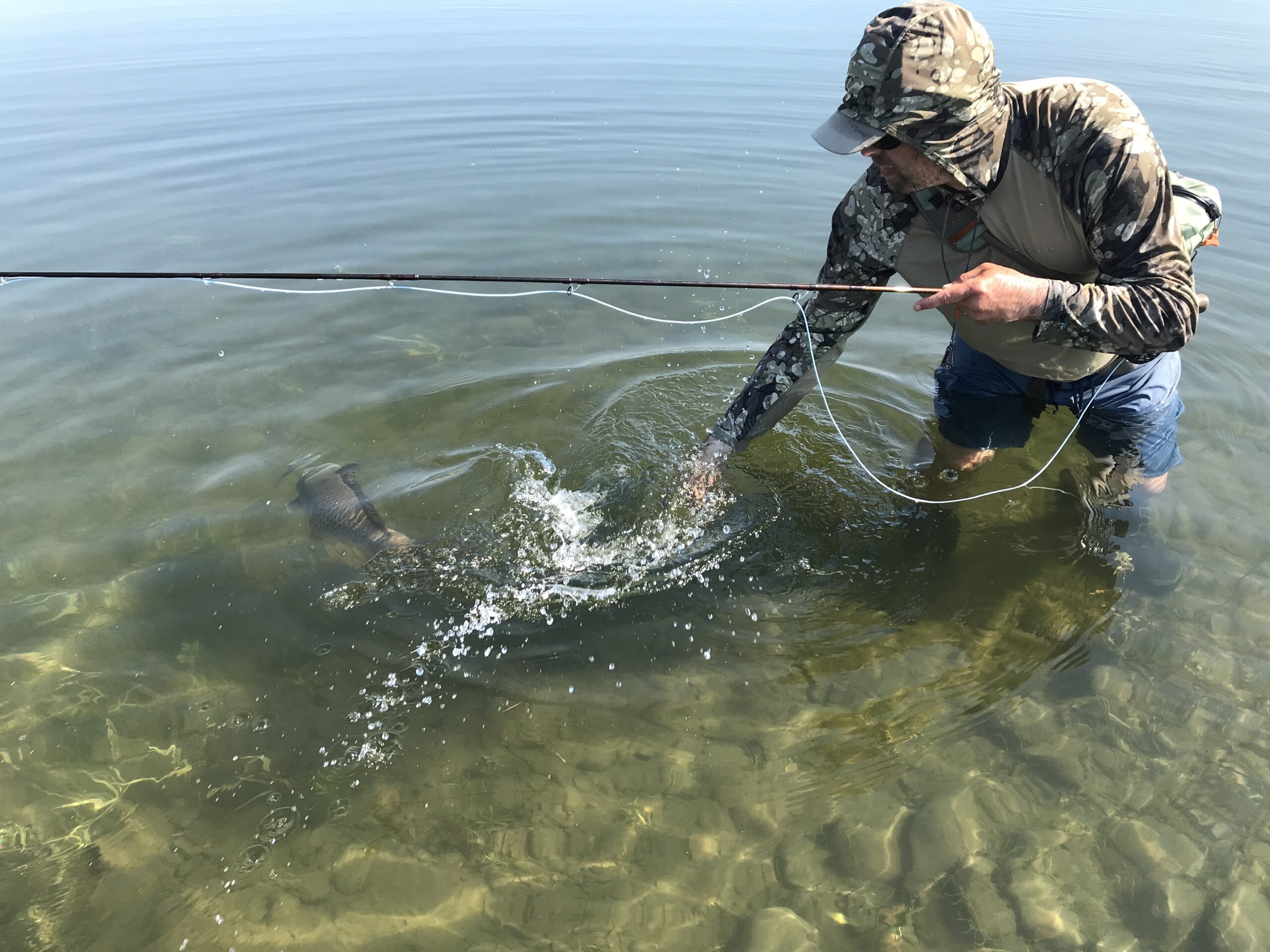 Waters should eventually begin cooling down, which is certainly favorable for a lot of fish, and migratory species like coho and sea run cutthroat will make their appearance on the river scene. The days are getting noticeably shorter too, but the productivity and intensity of your fishing time can be extended as well, with little need for that afternoon siesta when the thermometer red lines and you’ve had a few too many cervezas. Kids are back in school soon if not already, and your tubing, sun bathing, picnicking hordes will be mostly gone from the rivers. It’ll be quiet and peaceful once again, save for a few other fishermen. September will be some of the last chance to explore the high country, an opportunity to catch feeding salmon from the saltwater beaches, a chance to get back out on lowland lakes that’ve been too darned hot to fish over the last couple of months and usually marks the annual appearance of the October Caddis that get the trout every bit as excited as we are to go pursue them with large dry flies. Yep, just like Oktoberfest beer, the caddis tend to show up a month earlier than their name suggests.

While much of the summer felt a bit slower than usual around the shop, August largely made up for it. Dropping gas prices, lots of open fisheries and resumed travel plans have all helped keep us as busy as ever. We’re going to kick off our open fly tying nights again this fall for the first time in years and are really looking forward to that. We’ll also be cohosting the International Fly Fishing Film Festival (IF4, the one you didn’t already go see in Mount Vernon last January) later in November. We’ll get details on that as they become available. In the meantime, capitalize on the season and get out there fishing while an abundance of opportunity exists. We guarantee you won’t be moping around in December wishing you had mowed the lawn one extra time or rearranged your cupboards instead. 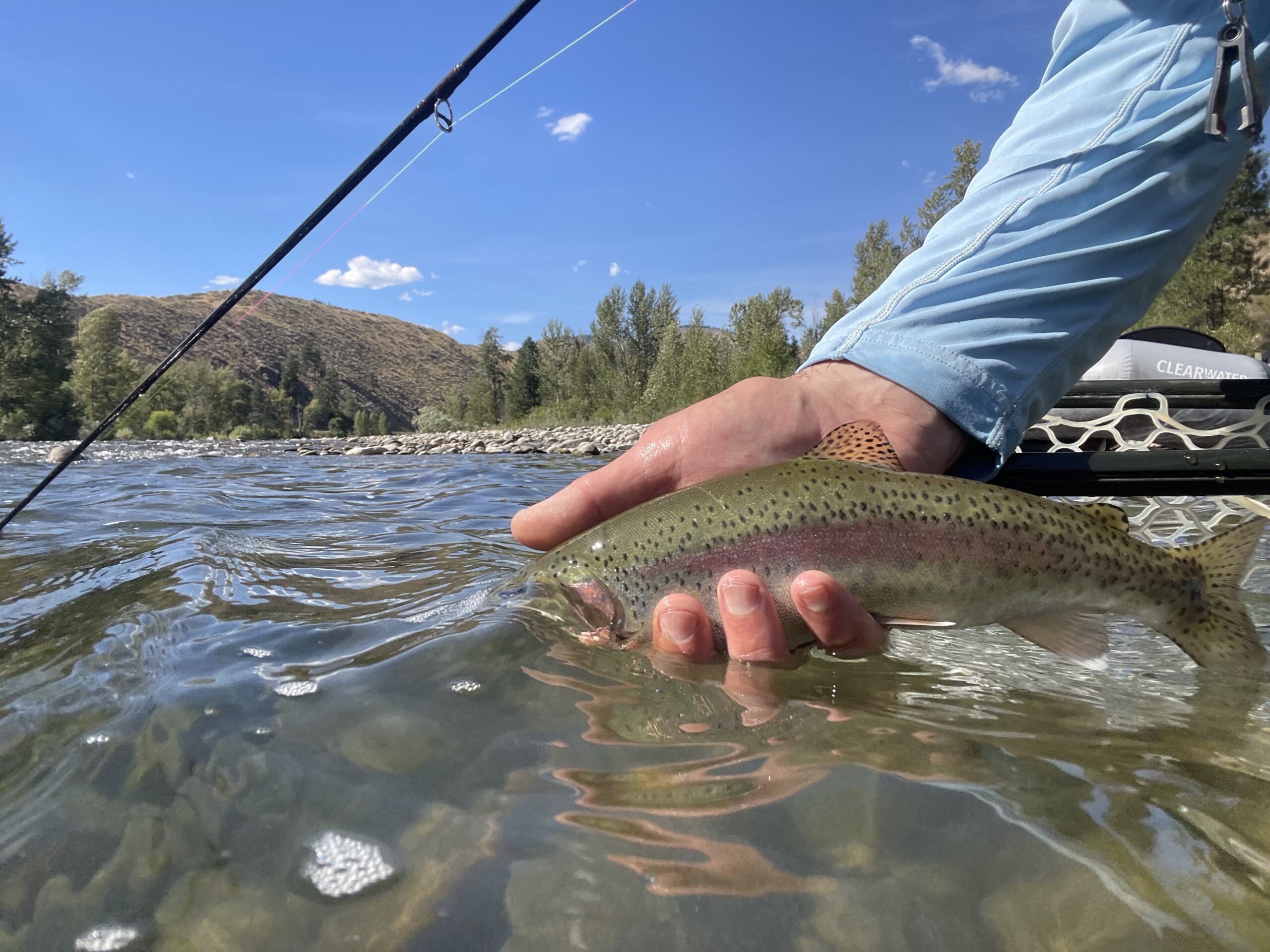 Rivers
The snow is beginning to look pretty thin along the western Cascades peaks and accordingly, most area rivers are at the lowest they’ve been all summer. For the most part, we’ve avoided heat-related hoot owl restrictions in many places this year, but it’s a good time to be carrying a small stream thermometer in your fishing kit and monitoring water temperatures throughout the day. Not only does warm water above 65 degrees tend to kill the fishing, but the fish you do catch often recover poorly or not at all in the oxygen deprived tepid water. The Methow in particular is getting pretty warm by the afternoon, so you’ll want to concentrate your fishing on the early morning hours if you’re heading that way. It’s still big dry fly season on most flows throughout the west. Large Foam Run Caddis in orange, orange Stimulators and Foamulators are good bugs for the October Caddis and hopper patterns like the Sandwich and Juicy Hoppers are still great along dry grassy riverbank. Purple Haze and Parachute Adams in smaller sizes are a great change up when mayflies are out and about. If the fish aren’t eating on the surface, Duracell Nymphs, Copper Johns, Golden Stone Nymphs, or swinging a Bird of Prey Caddis are effective alternatives. Mountain streams are still a great place to venture out in search of trout this time of year. Ant and beetle patterns, Royal Wulffs, Para Wulffs, Parachute Black Gnats, small Stimulators and Peacock Caddis have been working well. As an added bonus, the mountain blueberries and black huckleberries are around in the high country too, so you can both fish and graze your way through the day. 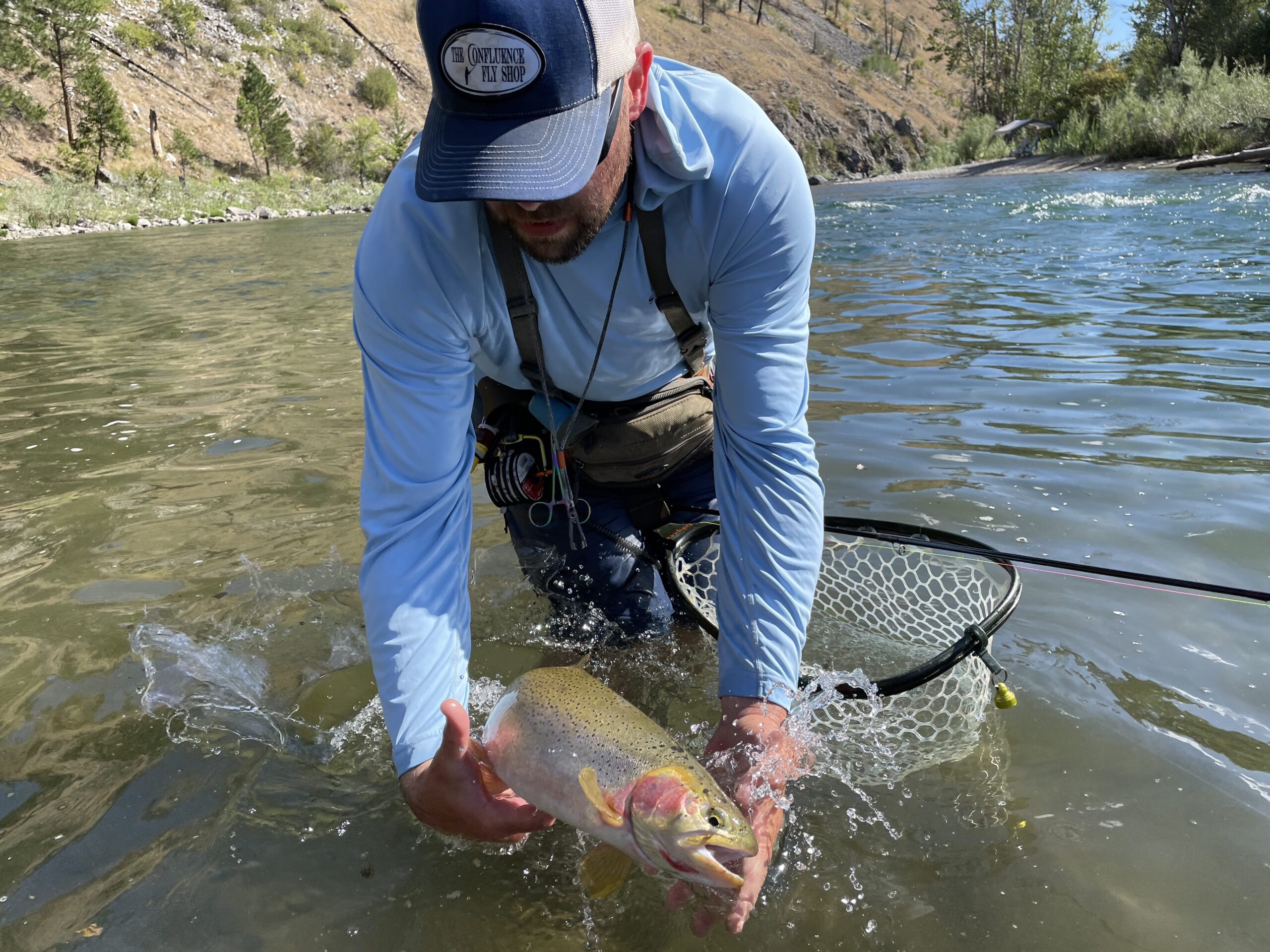 The Skagit and mainstem Stillaguamish open for coho on September first and there are already some fish around in the rivers. The Nooksack mainstem has some coho around as well. Both the lower Nooksack and Skagit below the Sauk are running very glacial with limited visibility at the moment. Look for longer cooling nights in the coming week to help improve water clarity. In the early river coho season we tend to do better with smaller Hot Shot Comets, pink or purple Egg Sucking Leeches and Flash Flies. As the season progress and the fall rains bring river levels up, larger presentations like chartreuse, pink or popsicle Alaskabous, Starlight Leeches and Dali Llamas begin to be more effective on coho. If you’ve not yet tried an OPST Commando or Scientific Anglers Skagit Lite on a single hand 7 or 8 wt. rod for salmon, this is our favorite and most versatile system for targeting salmon in the rivers. Sea run cutthroat will begin trickling into our North Sound rivers this time of year and can provide exceptional fishing with a 4 or 5 weight through September and October and even into November. They tend to favor slower, lower river sections with lots of frog water, woody debris and undercut banks. Grab a handful of Reverse Spiders, Raccoons, Rolled Muddlers and Hot Head Buggers and start plying your favorite cutthroat hidey holes in the “S” rivers. 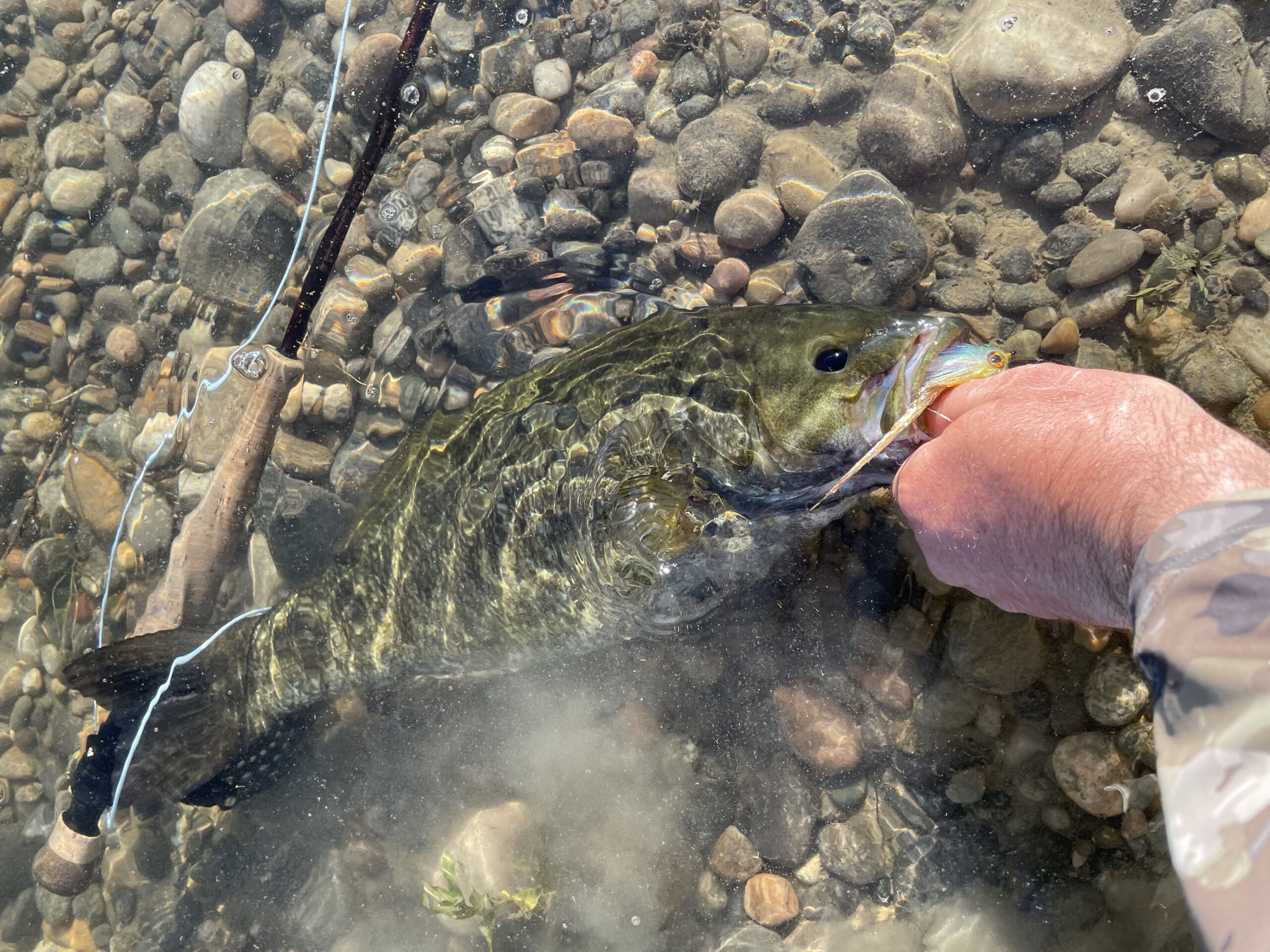 Lakes
It’s prime time to lace up your hiking boots and set out into the alpine country for high lake fishing. Griffiths Gnats, Mosquitos, Parachute Adams, Para-Ants, Micro Leeches, Peacock Soft Hackles and Hare’s Ear Nymphs are all flies you should have with you. If you can find your way into Ross Lake on the U.S. side to pack a canoe/kayak or rent a boat from Ross Lake Resort, September and October are the best two months to fish up there. Thin Mints, Dude Friendlies, Clousers, Frankie Shiners, Low Fat Minnows and any other 2-3″ minnow imitation fished on a full sinking line are the ticket for big wild rainbows. Unfortunately, the access road into the north end of Ross and the Hozomeen Campground remains closed after last fall’s rampant flood damage so access via Canada to both the north end of the lake and the upper Skagit River remained closed.

Local bass and panfish fishing is still going strong and should last until the weather really starts to cool off. Mornings and evenings remain the most productive time to fish and with the summer weed growth and dense aquatic vegetation, topwater presentations remain the most effective way to fly fish. Lowland trout lakes should begin cooling off again in September and trout lakes on both sides of the mountains will be worth checking out as fish really strap on the feed bag for another few months before freezing temps largely shut them down for the year. Leeches, scuds, bloodworms and minnow patterns are the bread and butter of your autumn trout lake fishing. Please note that as of August 24th, Pass Lake is closed to fishing due to a toxic algae bloom. It typically reopens sometime in the fall when the algae levels drop to acceptable levels and can provide exceptional streamer fishing when the lake’s rainbows and browns gorge on fathead minnows. To keep tabs on Pass Lake’s algae status you can check the State Park website or the Washington Department of Ecology site. 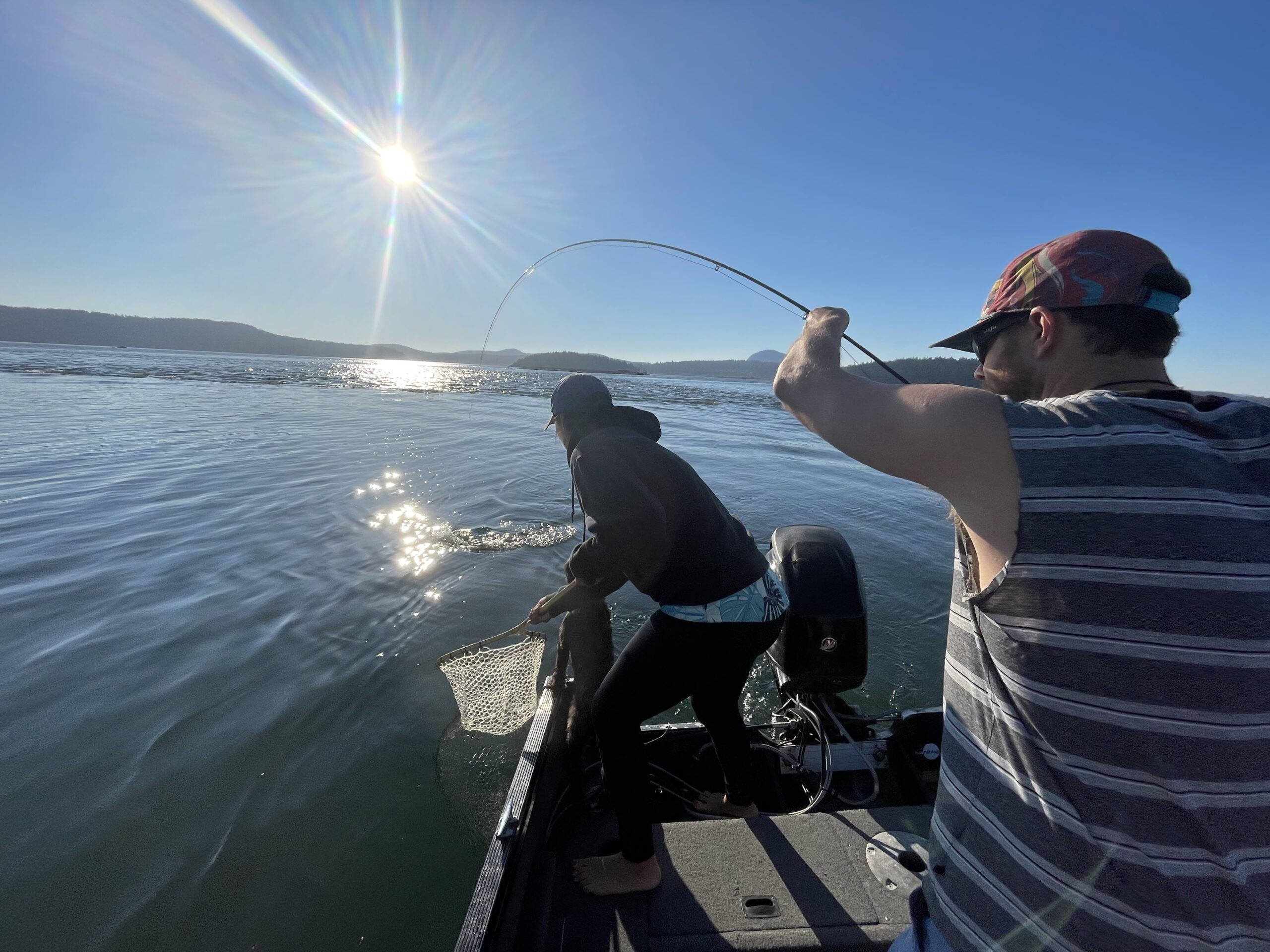 Beaches
The coho are coming! Now’s the time to start checking out beaches along the west side of Whidbey Island as ocean coho begin making their way into Puget Sound. Marine Area 9 is open through the end of September for coho and this year’s run is forecast to be pretty decent. Most public points and state parks along Whidbey’s west side offer shots at coho salmon as they travel to various rivers throughout the Sound. Look for good tidal movement, rip current lines and strip Clouser Minnows and bigger herring patterns on 6-8 wt. rods. You’ll definitely want a stripping basket of some sort. We have them at the shop. Fish can show up at any point during the tide, but we tend to focus much of our beach fishing around the two hours before and after a tide change. If something’s going to happen, it happens more often than not within that window. 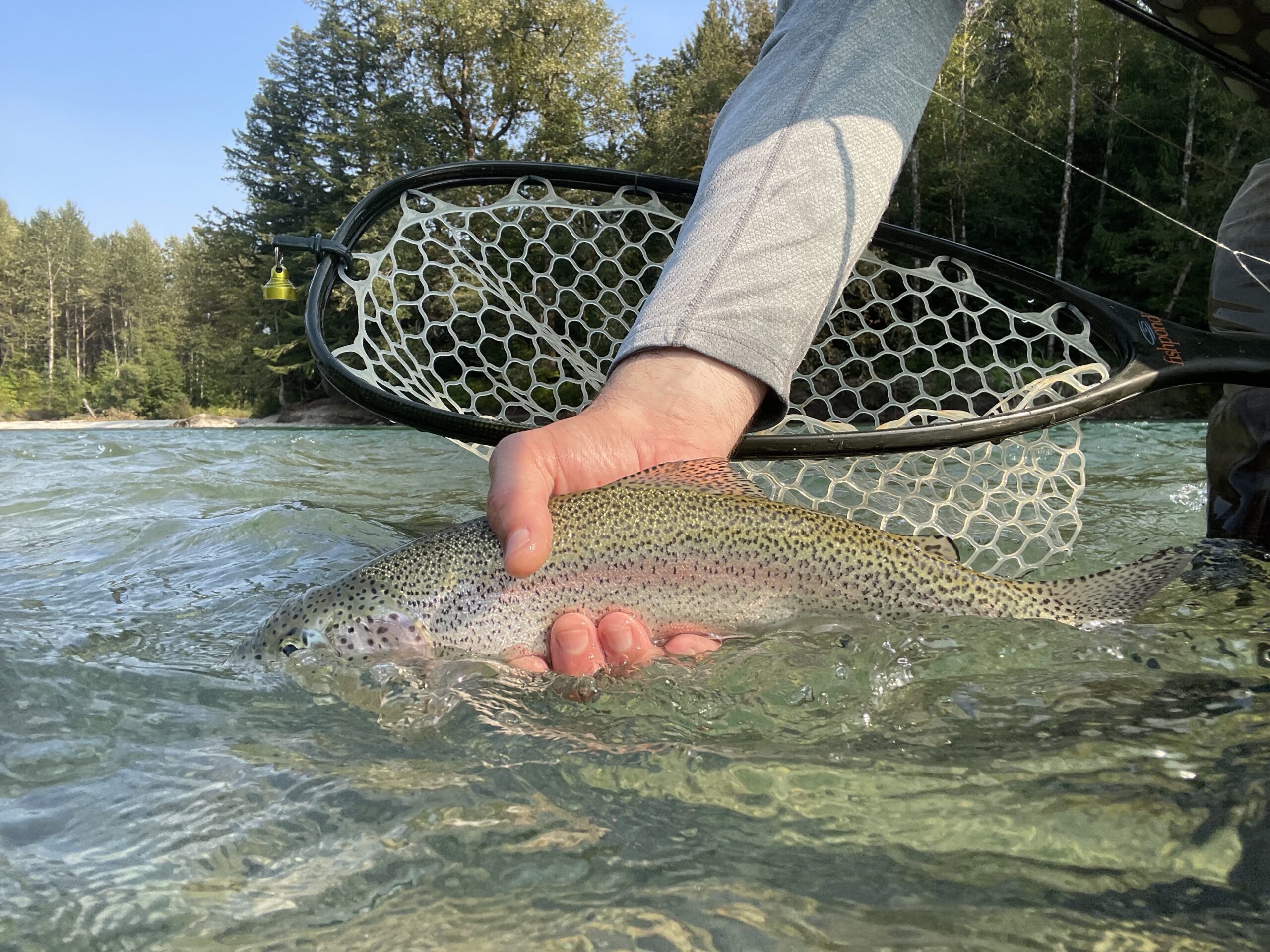